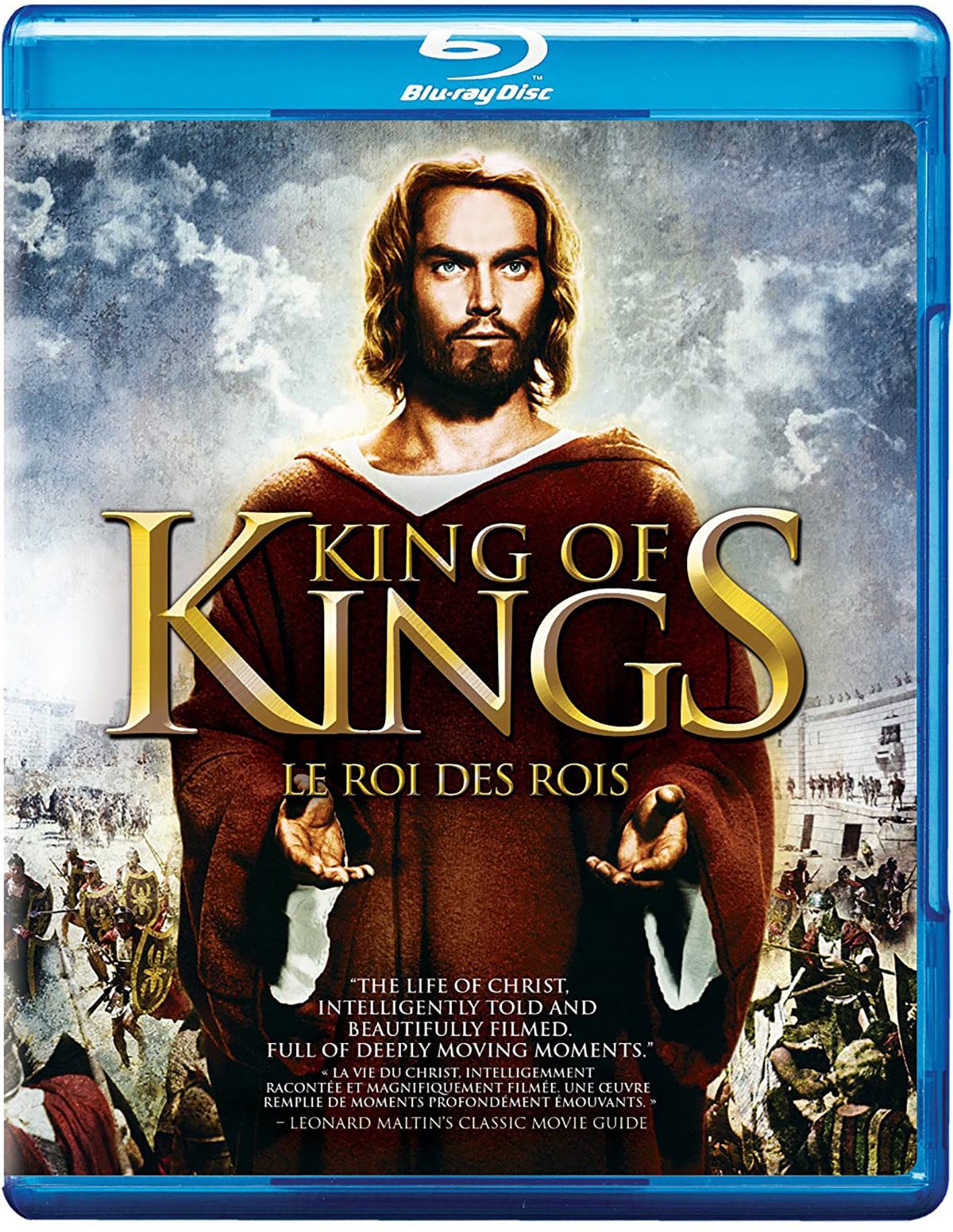 Nicholas Ray’s King of Kings unfolds like religious Cliffs Notes for the bibilically impaired, a bloated Sunday-school lesson blasting Jesus’s greatest hits on a monotone jukebox stuck in repeat mode. Anchored by Orson Welles’s omniscient voiceover, Ray’s sandbox of artifice streamlines the birth, life, death, and resurrection of Jesus (Jeffrey Hunter) into an easy linear timeline, framing each major event and turning point with a flair for bombastic staging and maximum ideological impact. The grandiose scale couldn’t be farther from Ray’s earlier, more character-driven work like On Dangerous Ground and Bigger Than Life, ticking time bombs of conflicted emotion just waiting to explode. King of Kings is too scattered and somber to succeed in this manner, replacing Ray’s patented human intensity with endless exposition and speeches, meandering through the familiar headlines of Christianity without providing any nuanced subtext.

Droll characterizations and wrenching oration aren’t the only pressing issues in King of Kings. A massive film like this needs inventive pacing to cover a large amount of historical events in a fresh way, yet Ray completely fails in this respect, letting the heavy-handed material overwhelm all sense of duration and conflict. The narrative clumsily jumps from the Roman invasion of Judea to Joseph (Gerard Tichy) and Mary’s (Siobhan McKenna) Bethlehem manger, to Herod’s (Gregoire Aslan) ascent to the throne, to John the Baptist’s (Robert Ryan) sermons, to Pontius Pilate’s (Hurd Hatfield) arrival, and finally to Jesus’s religious awakening and growing popularity without any aesthetic imagination. By the time Judas (Rip Torn) betrays Jesus and dooms him to crucifixion, tedium has seeped into every frame, rendering a lasting connection to the material impossible. To say King of Kings exhausts you into submission would be an understatement.

Hilariously, almost all of the film’s vim and vigor comes from its sinful characters acting very badly. The best example is Herod’s devious stepdaughter, Salome (Brigit Balzen), a razor-sharp viper whose sinister side comments are always more biting and engaging than the conservative gospel spoken around her. In the film’s seedy centerpiece, Salome tricks the drunken Herod into handing her John the Baptist’s head on a silver plate, literally. She performs a seductive dance reminiscent of a hooded king cobra maneuvering into striking position, and not surprisingly there’s a serpentine ornament on her crown. This short burst of energy frames a power struggle between evil and ignorance, by far the high point of King of Kings and really the best auteurist marker for Ray as director. But for a film that endlessly rambles about the duality between “messiahs of war and messiahs of peace,” the alluring representation of the former and irksome representation of the latter borders on absurd.

Still, we must remember Ray was just one of many directors who, during the late 1950s and early ’60s, produced waterlogged genre films that deeply contrasted with their earlier films. Directors like Phil Karlson, Andre de Toth, and Anthony Mann were also sucked into the big-budget spectacle void, but the overall safeness and sluggishness of King of Kings is astounding by any standard. The gigantic battle scenes, flushed with countless extras seemingly standing around, are unforgivably wooden and poorly shot, while the dramatic crescendo of Jesus sacrificing himself for Barabbas (Harry Guardino) is dominated by obvious high-angle shots punishing the viewer with an otherworldly point of view. While the aforementioned master filmmakers were able to sustain some form of their earlier glories, Ray failed to do so. It’s unimaginable for me to describe a Ray film as laborious, but King of Kings is just that.

Interestingly, while King of Kings is an old-fashioned slog, it’s the flipside to Mel Gibson’s postmodern slog, The Passion of the Christ. Whereas Ray’s vision strips away the stylization of pain and suffering, except for a brilliant smash cut from a screaming Jewish mother to a poisoned Herod Antipas (Frank Thring), Gibson completely revels in it, almost arrogantly so. I still prefer Ray’s numbing origin map of Christian history to Gibson’s shock-and-awe aesthetics, but that doesn’t mean this white whale of a film doesn’t slow to a snails pace far too many times for comfort. When the brief, underdeveloped, and intoxicating representation of sin far outweighs the lengthy, tedious examination of Christ’s many sacrifices, it’s time to rewrite history one more time. That is, if you can sit through one more Sermon on the Mount.

This Blu-ray release marks the 50th anniversary of King of Kings’s theatrical release, and the 1080p high-definition transfer provides a glimpse into the brilliantly vibrant color schemes theatergoers witnessed in 1961. However, this is not a great transfer by any measure, with certain background elements (faces, set design) blurred or completely out of focus. The wide shots panning legions of extras during the Sermon on the Mount sequence are impressive, but once the film comes in close, the technical flaws, like muddy black levels, start to add up. To make matters worse, the sound design is often unbalanced, with some of the actor’s lines slightly out of sync. Also, most of the dialogue sounds like ADR. While I’m not positive most of the film was indeed non-synchronous, it still makes almost every sequence sound like it’s been recorded in an echo chamber.

Very minimal stuff here: a four-minute television special from 1961 called “The Camera’s Window of the World” that documents Nicholas Ray’s staging of the Sermon on the Mount. The featurette is interesting for its archival footage and statistics on the magnitude of the shoot, but at such a short duration it hardly counts as substantial. Also, newsreel footage from the New York City and Los Angeles premieres respectfully, and a theatrical trailer.

Nicholas Ray’s King of Kings is an extreme test of one’s patience, a sluggish modernist power point presentation on the glorious influence of Jesus’s greatest hits.

Review: Gamera vs. Zigra and Gamera: The Super Monster on Shout! Factory Blu-ray