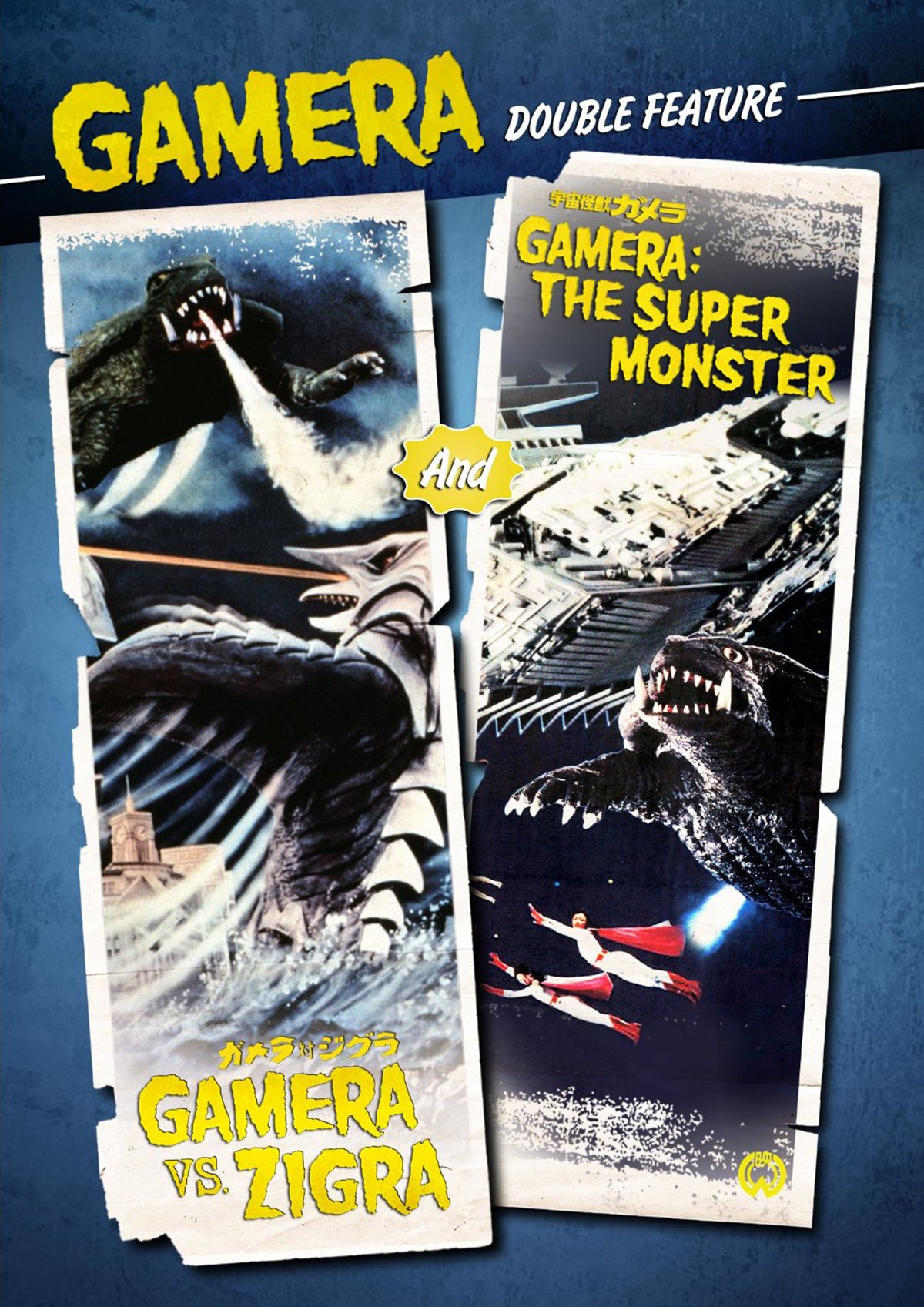 By the time the original Gamera rolled out in 1965, the Japanese kaiju (giant monster) genre was already well underway. Godzilla had battles with King Kong, Mothra, and King Ghidorah, among others, under his belt, and genre jumpstarter Inoshiro Honda had even granted several other monsters (such as Rodan) their own films in the spotlight. Created by the Daiei Motion Picture Company to rival Toho’s successful string of films, the fire-breathing, jet-propelled giant turtle was a stretch from the outset. Even in his original film (titled Gamera: The Invincible in its stateside release), the big fella was hardly a titan of the threatening sort (especially when he walked on his hind legs), and it wasn’t long before the series was catering to an under-10 demographic far more explicitly than even the most juvenile of Godzilla entries.

Gamera vs. Zigra, from 1971, was already the seventh film in the original Gamera series, and its slipshod construction (even by the standards of films featuring actors in rubber monster suits) suggests less in the way of a thought-out film than a product cranked out so as to fulfill a McDonald’s Happy Meal toy contract. A spaceship resembling a bowl of Dippin’ Dots ice cream from the planet Zigra has invaded Earth and demands the human race surrender at once; so as to prove their technological superiority, the female representative on board (later revealed to be a hypnotized human) launches a massive earthquake against Tokyo, leaving the city in ruins. Credibility wanes, then, when the city is seen perfectly intact whenever it appears outside the Zigran viewfinder, or when the antagonistic woman proves utterly incapable of dispatching two children who managed to escape her presence after catching a glimpse inside the spaceship.

Best, then, to forget the human filler altogether and concentrate on the titular matchup. When Gamera destroys the spaceship, he frees a giant alien shark, complete with laser-beam nose and capable of bipedal locomotion. And so it goes. The film entire isn’t nearly as much fun as it should be, but for those with a cheeky fondness for city-scale monster mashes, there are some fleeting pleasures.

Would that such could be said for the 1980 follow-up, Gamera: The Super Monster, which functions as something of a greatest-hits package for the series. Another malevolent alien race—obviously fans of the original Star Wars opening—demands the total submission of humanity, unleashing the entirety of Gamera’s former foes on the Earth, albeit one at a time, not unlike anonymous henchman. Footage from the preceding Gamera sequels has been recycled here in utterly shameless fashion, most of it having been whittled down via new nip-and-tuck edits that frequently destroy what little sense of continuity there was in the first place. As a result, the rules of physics appear to have taken a vacation, but not even in ways entertaining or surreal, merely half-assed; it isn’t even made clear how some of this film’s antagonists are finally defeated, unless we’re to assume that they’ve all simply become pushovers.

No film featuring a half-dozen skyscraper-sized monsters duking it out can possibly justify being this lethargic. Similarly yawn-inducing is the film’s human plot concerning three “space woman” who transform into human disguises via a series of oft-repeating and utterly hilarious cheerleading moves. Props are due, however, for the daring finale, in which Gamera sacrifices himself in a surprisingly moving act that will likely prove a kick in the gut—and a sterling moral example—to any otherwise undemanding children in attendance. The filmmakers prove hilariously overconfident, however, in an earlier aside: Stomping around a miniature city, Gamera knocks over an easel advertisement, which, upon a zoom-in, is revealed to be a poster for the latest Godzilla movie. Suffice to say, inviting comparisons to the king of the monsters only serves to highlight the weaknesses rampant herein.

The best thing about this package is the ability to finally see these films in their original widescreen format. That said, these images were never anything to sneeze at in the first place, so the so-so transfers present here are probably the best these films will ever look in your home theater. Ditto the sound, which is similarly adequate and uninspiring. (For what it’s worth, Gamera vs. Zigra is the superior of the two.)

The DVD packaging lists the English dubs as a special feature. The inclusion of such would seem to be mandatory for any respectable kaiju release, but given the apparent lack of materials to draw from, I’ll let it slide. Within each film’s menu is a small selection of publicity stills and behind-the-scenes photos, and there’s also a nifty illustration of Gamera’s inner anatomy inside the DVD case.