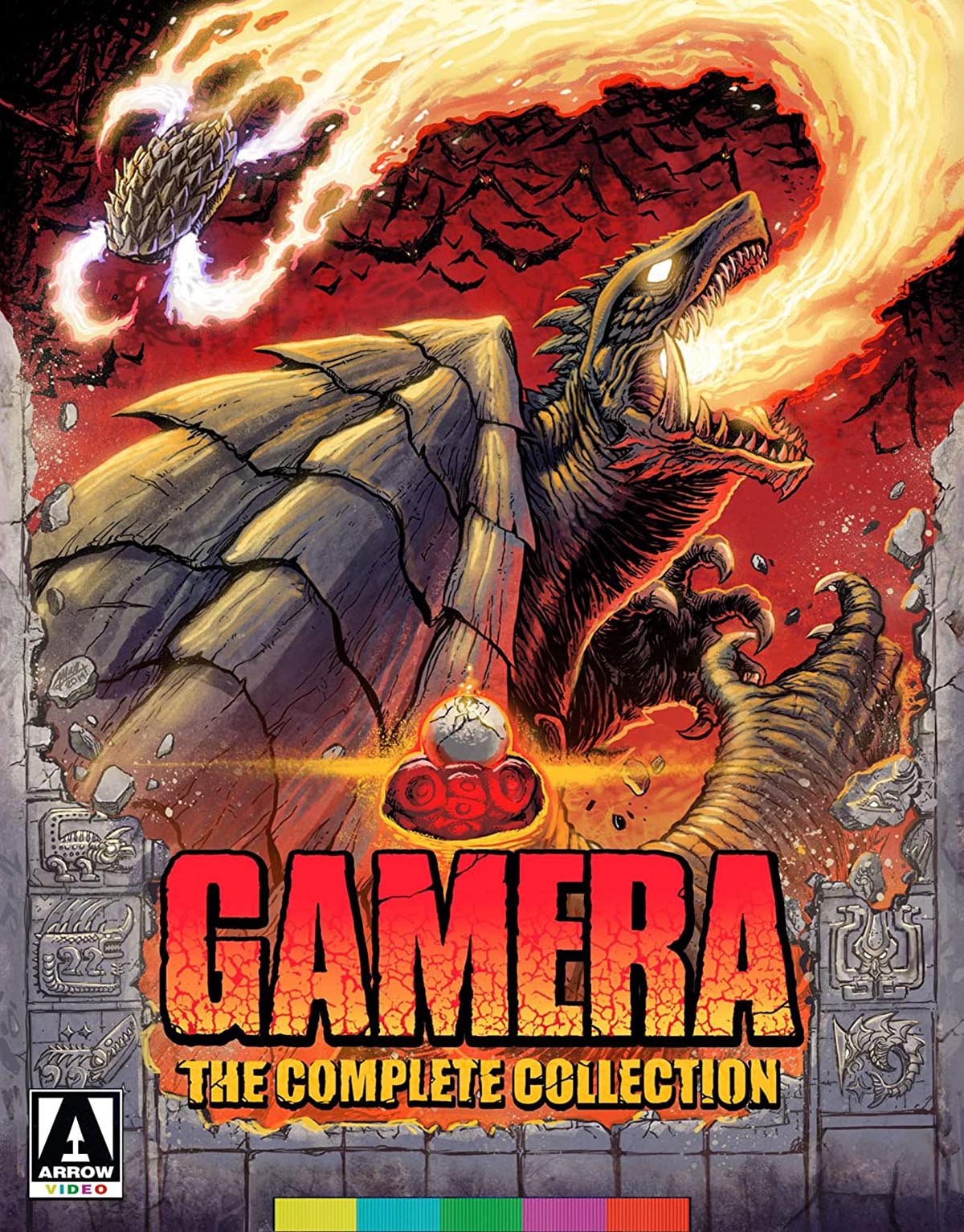 Created by Daiei Studios as an unabashed cash-in on Toho’s burgeoning Godzilla franchise, the Gamera series features a giant, fire-breathing turtle that can fly using jet power when it retracts its limbs into its shell. Much like Godzilla, Gamera is clearly the antagonist of the first film in the series, only to become a cuddlier, kid-friendly creature in subsequent films. Indeed, by the third or fourth film, Gamera is overtly invoked as a protector of children, a role it will continue to enact thereafter. With its quasi-documentary style and repeated invocation of scientific authority, Gamera the Giant Monster takes its tonal cues from the first Godzilla film. But where Godzilla was spawned from very real fears about the consequences of underwater nuclear testing, Gamera the Giant Monster is as interested in the realm of myth and folklore as it is in verisimilitude, a preoccupation that will only increase over the course of the series.

While it may be ill-advised to cast our nets too deeply into the waters of thematic interpretation when it comes to movies with a giant monster turtle at their center, it’s nevertheless clear that the Gamera series has a few things on its mind, often enough announced at film’s end in the form of a neatly beribboned moral lesson (at least in the original Showa-era films from 1965 to 1980). Gamera vs. Barugon and Gamera vs. Gyaos, the second and third films, respectively, excoriate greed on both the individual and collective level. The latter pits corporate rapacity (a not uncommon target in mid-‘60s Japanese cinema) against the avariciousness of villagers looking to blockade the construction of an expressway for their own gain. Interestingly, the villagers end up paying penance for their misdeeds, while corporate know-how helps save the day, a mixed message if ever there was one.

Environmental concerns crop up in the seventh and final film of the Showa period, Gamera vs. Zigra, which is set in and around the Kamogawa Sea World facility. The film is a pitched battle between kaiju for control of the bathysphere, which stands as a pellucid metaphor for the state of the deep seas in the era of rampant pollution and the practice of overfishing. The “Heisei trilogy” puts ecological affairs front and center by suggesting that our collective treatment of the planet places it in constant jeopardy from oversized beasties of all sorts, a monstrous metaphor that demands no particular divinatory skills to be read.

The Gamera series takes myth and folklore quite seriously, even if it often plays fast and loose with its own internal mythology. The first film tentatively supplies an Atlantean origin for Gamera (a notion the “Heisei trilogy” picks up and runs with). Gamera vs. Barugon validates its “native warning” in the face of modern rationality. Gamera vs. Jiger has an ancient idol that protects against incursions of the titular antagonist in a way that combines both modes of thought. And Gamera 3: Revenge of Iris proposes mana, a ubiquitous life force derived from Polynesia mythology, as the source of Gamera’s fire-breathing powers.

In terms of sheer watchability, the first seven films range (depending, in part, on budgetary limitations) from modestly compelling to outright risible. Certainly it’s easy to see why they were deemed fodder worthy of ribbing on Mystery Science Theater 3000. But it’s precisely that sometimes goofy, handmade quality of the “suitmation” effects and set design that gives them their charm. The “Heisei trilogy” constitutes a startling step up in every aspect, from CG-sweetened effects to little grace notes of detail (both narrative and character-based), amounting to three of the greatest kaiju movies ever made. Alas, then, the second reboot Gamera the Brave stumbles backward into cuddlesome critter cuteness. It’s an unfortunately retrograde finale to a series that really deserved better.

There’s not much information in the enclosed booklet about the provenance of the HD masters for the first eight films, other than that they were “prepared and supplied” by the current rights holder, the Kadokawa Corporation, while the ‘90s trilogy come from director-approved 4K restorations. The transfers look uniformly excellent, notwithstanding some minor issues with color density and grain levels that occur intermittently throughout.

Audio comes in Japanese and English Master Audio mono for the first eight films, sometimes accompanied by either an English dub prepared for American television or an alternate U.K. English dub. The later films add Japanese and English 5.1 Master Audio surround tracks, which are thunderous wonders, rocking the side and rear channels, and giving real presence and depth to the kaiju battle scenes. The earlier mono tracks range from the solid, if dynamically limited (the Japanese tracks), to the somewhat boxy and tinny (the English dub tracks), which is pretty much par for the course given the history of the series.

To match the sheer heft and wealth of bonus materials contained in Arrow Video’s Gamera: The Complete Collection box set, you have to go back to their 2016 release of The Herschell Gordon Lewis Feast, which was similarly packaged in a large-format rigid box. Inside this one there’s a 130-page hardback that reproduces the four-issue Gamera miniseries from Dark Horse Comics in 1996, as well as a new prequel comic from artist Matt Frank, who also designed the outer box artwork. There’s an 80-page softcover that contains a rundown of the entire Gamera series from Patrick Macias, X-ray illustrations of the various kaiju monsters, an interview with director Yuasa Noriaki, and BTS dispatches from the ‘90s trilogy from Fangoria magazine. The eight individual discs come housed in a fully illustrated hardback with thick cardboard pages, each of which holds two discs in half-moon slits, which can make removal a bit of a challenge at times. Tucked inside the front cover is a foldout of “Gamera’s Map of Japan,” and on the last page are art cards for each of the films with artwork by Matt Frank.

The 12 films in the collection come with a staggering amount of bonus materials. There are introductions from Japanese cinema expert August Rangone for every title save Gamera the Brave. Rangone packs a lot of information into a compact run time, takes a suitably jocular tone, and often concludes with an amusing bit of ballyhoo. For a deeper dive into individual titles, there are commentary tracks for all 12 films by a variety of genre specialists. Alternate U.S. theatrical and TV edits are provided for several titles. A three-part, making-of documentary that runs over six hours is divided across the “Heisei trilogy” from the ‘90s. Finally, there are any number of archival interviews, featurettes, promotional materials, and even a comedic dub track or two. Whatever you make of the films themselves, Gamera: The Complete Collection is without a doubt one of the major home video releases of 2020.

Arrow Video has unleashed an absolute monster of a box set devoted to the exploits of our favorite giant, flying, saber-toothed turtle.

Blu-ray Review: I Spit on Your Grave Gets 3-Disc Ronin Flix Collector’s Edition