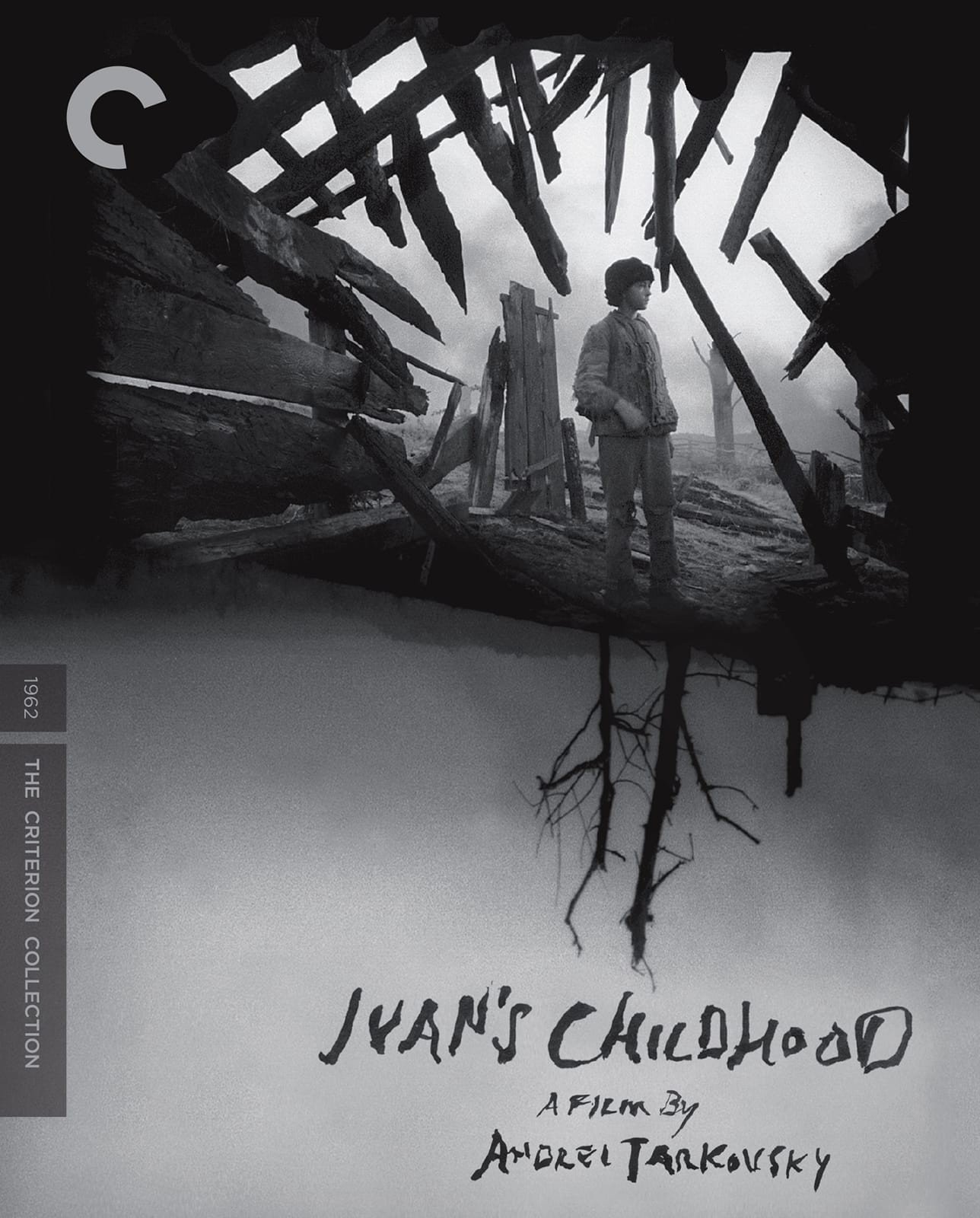 Andrei Tarkovsky’s Ivan’s Childhood bears the unmistakable stamp of a calling-card film. In his book Sculpting in Time, Tarkovsky describes Ivan’s Childhood as his “qualifying examination.” Taking over the reins of a project he hadn’t originated, Tarkovsky soon realized the occasion would permit him to prove his mettle as a director, if only to himself. Tarkovsky and DP Vadim Yusov determined to turn a fairly conventional war film into a poetic reverie drenched in a doom-laden atmosphere conveyed by shadowy high-contrast cinematography, poetically resonant lighting schemes, and intricately choreographed camera movements. Tarkovsky’s attention to the vicissitudes of what he called “poetic logic” generates a beneficial tension between the reality of the film’s external events and the more equivocal inner life of its central character. This logic also endows the film’s surfeit of symbolically charged objects with an almost tactile dimensionality. As a result, a polyvalent sensuality invests the interspersed dream sequences with a powerful affective charge.

Ivan’s Childhood opens on a note of warmth and natural wonder with towheaded, barefoot Ivan (Nikolai Burlyaev) frolicking in a pasture, delighted by the sudden advent of a butterfly, spellbound by the involute complexities of a cobweb. When his mother calls him home, he rises into the air and seems to float along over the treetops like a blown dandelion. This is the first intimation that the film’s sheen of naturalism might not be as transparent as it appears. For this is no bucolic idyll. Drinking cool water from a bucket, Ivan gazes up at his young mother (Irma Raush) in rapt affection, when abruptly his POV heaves into an oblique angle. Ivan calls out “Mama!” and awakens to the clamorous alarum of shellfire. In a single unbroken take, the camera (at floor level) watches Ivan jolt awake, tilts up as he gains his feet, pans around and tilts down as he moves about the room gathering his few belongings, descends a set of rickety steps, and crosses to a wooden plank door.

It’s worthwhile to dwell on the specific details of this scene. For one thing, the transition between dream and reality establishes the dialectic between past and present that haunts the entire film. At the most basic level, these dream sequences do double duty as quasi-flashbacks that hint at Ivan’s past history, conveying events that are otherwise only mentioned obliquely in the film’s present tense. The dream imagery also serves up concrete yet symbolically resonant objects that recur throughout. In this instance, the bucket of water crops up again in a dream that portends the death of Ivan’s mother. Indeed, you could say that water is the cardinal element presiding over Ivan’s Childhood, present in each of the film’s four dream sequences, as well as swamping the “drowned forest,” the no man’s land that stretches between the Russian and German armies.

The middles passages of Ivan’s Childhood form a caesura, a chasm of anticipation and foreboding that opens up in the time between missions. The film imbricates in several directions at once: When he discovers his superiors want to send him off to military school, Ivan briefly runs away, encountering an old man living in the midst of some still smoldering ruins, in a scene as bleak and blackly funny as any you’ll find in the gleefully “miserabilist” films of Béla Tarr. Later, Galtsev (Yevgeny Zharikov) tries to amuse him with a plundered picture book. Ominously, the tome contains Albrecht Dürer’s Apocalypse woodcuts. Even the love triangle between Lieutenant Galtsev, the nurse Masha (Valentina Malyavina), and Captain Kholin (Valentin Zubkov) is rife with intimations of mortality. In the justly famous scene where Kholin attempts to woo Masha in the middle of vast birch woods, he grabs her and kisses her, dangling her playfully over a ravine, which resembles nothing so much as an open grave.

The audacity of Tarkovsky’s radical juxtapositions exceeds the fundamental act of blurring the line between dream and reality. Late in the film, there’s an unexpected cut between Ivan’s final mission and grainy documentary footage of Berlin after the Russian invasion, constituting a minute or so of newsreel voyeurism. This sudden temporal shift not only leaves the fates of the protagonists unresolved, but also marks the unprecedented intrusion into the film’s diegetic reality by another mode of filmmaking altogether, a provocative collision of representational models worthy of Sergei Eisenstein. After Galtsev discovers evidence of Ivan’s tragic destiny among the records of the Nazi high command, Tarkovsky bookends the film with a final dream sequence that recombines the various symbolic threads running through the film.

Ivan and a group of friends cavort along the sun-dappled shoreline as his mother gazes benevolently on. This again is no idyll. Looming over this frolicsome scene stands a dead and desiccated tree. In the film’s final shot, the camera (perhaps supplying Ivan’s POV) runs smack into its blackened bole. Significantly, this image turns up again at the end of Tarkovsky’s final film The Sacrifice, where (as it does here) it emblematizes what J. Hoberman described as “the only crucifix appropriate to this blasted age.”

Criterion’s 1080p/AVC-encoded Blu-ray transfer is a marked improvement in clarity and discernibility over their already impressive 2007 DVD. The difference is especially noticeable in shadowy, low-light scenes, as well as in the many nighttime outdoor sequences; faces and objects that were hitherto difficult to differentiate now come through with crystal clarity. The linear PCM monaural track also compares favorably to the DVD with a significant boost in depth that really helps to open up the film. Vyacheslav Ovchinnikov’s protean score modulates from the hopeful and melodic rhythms of an early dream sequence to the dissonant atonalities that correlate with wartime’s harsh realities.

Carried over from the earlier DVD, Criterion’s selection of supplements provides plenty of contextual information. “Life As a Dream” is a 30-minute interview with film scholar Vida T. Johnson, who describes the Soviet film industry during the “Khrushchev thaw” of the late 1950s and early ‘60s, the production history of Ivan’s Childhood, and how Andrei Tarkovsky became involved with the film. She also details many of the formative artistic and cinematic influences on Tarkovsky, not least of which were the poems of the director’s father, Arseny Tarkovsky. There are also two 15-minute interviews with actor Nikolai Burlyaev, who played young Ivan, and cinematographer Vadim Yusov. Burlyaev recalls the casting process and the numerous screen tests he had to participate in, the rigors of the shoot (including what he had to do to work up some tears for a pivotal scene), as well as his collaboration with Tarkovsky, which he characterizes as affectionate and supportive. Yusov describes Tarkovsky’s conception of visual language and how it informed the film’s style and atmosphere, how Tarkovsky approached the dream sequences with an eye toward achieving a variety of poetic realism, and also chronicles many of the difficulties they encountered during the film’s production. The illustrated booklet contains an information-packed essay by Dina Iordanova, ruminations on the film from Tarkovsky himself, and the text of “Ivan’s Willow,” one of Arseny Tarkovsky’s poems, which inspired some of the film’s imagery.

Ivan’s Childhood contains in utero many of the formal and thematic preoccupations that would come to the forefront in Andrei Tarkovsky’s later masterpieces. Now viewers can bask in the film’s ample visual delights with Criterion’s gorgeous new Blu-ray transfer.