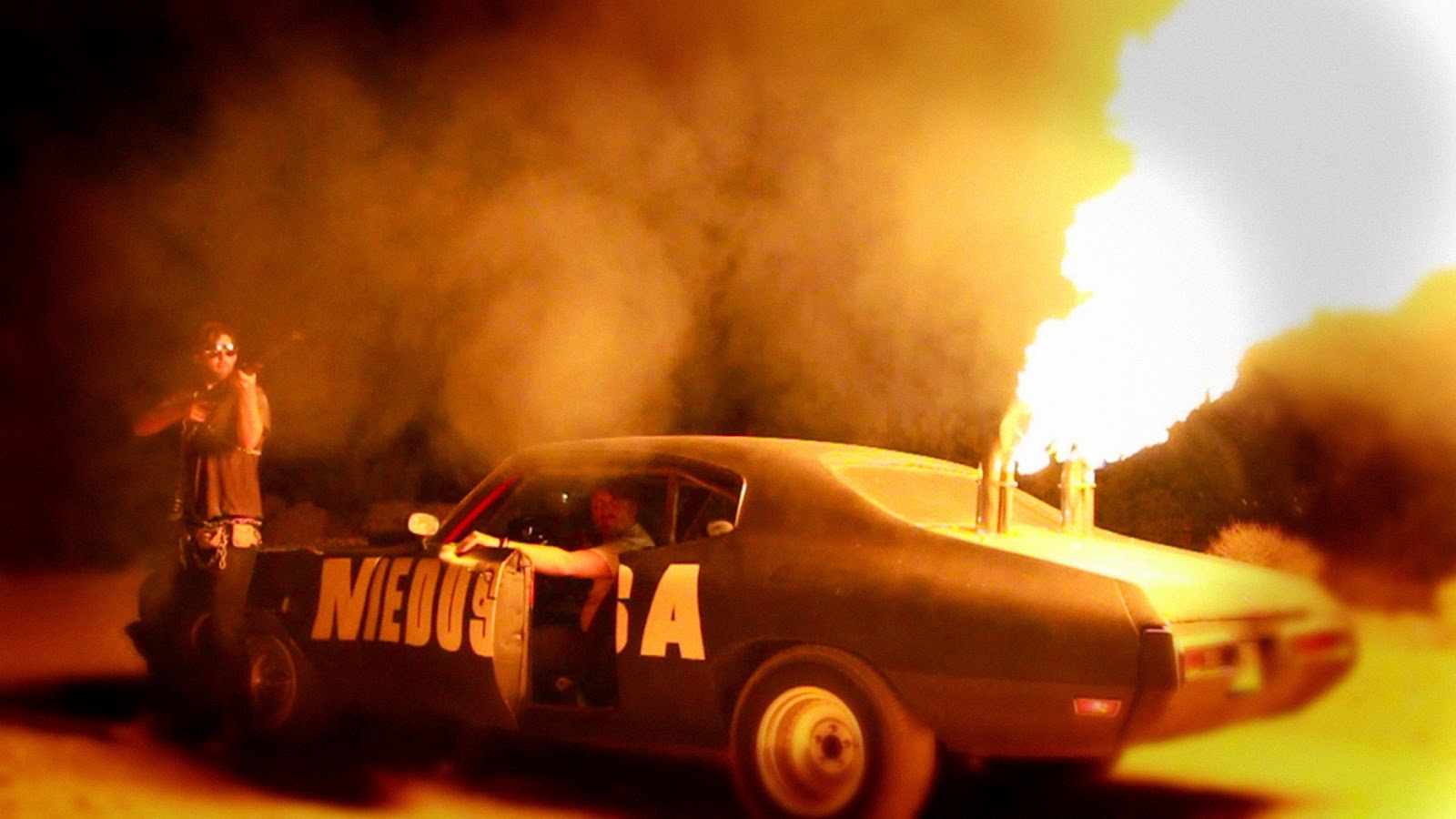 Time in writer-director Evan Glodell’s Bellflower is a linear path to a pitilessly bleak emotional abyss. Once the film’s blustery dreams of self-destruction have been represented, they can’t be taken back. Glodell doesn’t valorize the green machismo and blustery one-upsmanship that he uses to characterize Woodrow’s (Glodell himself) relationships with his best friend Aiden (Tyler Dawson) and the women that they both have crushes on. Instead, he presents Woodrow’s tortured view of his recent past as a series of events that all led up to one crucial moment.

Woodrow, the film’s precociously introverted main protagonist, eventually assumes the intuitively self-destructive persona he’s been facetiously flirting with throughout the film. That transformation is frightening and all-consuming. We see the film’s events distorted through the lens of Woodrow’s desperate yearning to understand how things got so bad. The world of Bellflower is the world as imagined by Woodrow. He’s constructed the film’s narrative as a means of making sense of what he’s done and futilely looking for a way to prevent what he knows will happen from happening. By film’s end, Woodrow has created an elaborate self-flagellating daydream that becomes so puissant that it escapes from his head and takes on a life of its own. It’s a fantasy of what will happen to him if he doesn’t stop himself from further devolving into the monster he’s jokingly imagined himself as. Still, regardless of whether this dream of fire, drugs, and mushroom clouds ever really comes to pass, Woodrow knows that just by imagining it, the damage he will potentially inflict on himself and others has already been done. And he only has himself to blame.

Compared to all the other characters in Bellflower, Woodrow is a totally mild-mannered screw-up. He shoots propane tanks with his buddy Aiden and spends all of his time building flamethrowers and souped-up muscle cars inspired by the first two Mad Max movies. But in the company of women like Milly and Courtney (Jessie Wiseman and Rebekah Brandes), Woodrow is knock-kneed and uncertain. After bedding Milly, he tells her, “Hey, that was really nice[…]I don’t think I’ve ever had sex that good before.” He’s so confused around these girls, that, in spite of basically knowing that Aiden’s got a thing for Courtney, he even uses Courtney as a rebound after going out with Milly. “You know that I have a crush on her though, right?” Aiden asks after he sees Courtney leaving Woodrow’s apartment. Woodrow sheepishly nods and smiles despondently. He knew, but he screwed up anyway.

While the narrative flow of Woodrow’s character in Bellflower is presented as a relentless succession of inter-related episodes, I’d argue that everything in the film is either reconstructed or projected by Woodrow from a single point in the film. In this sequence, Woodrow is seated on a couch and he’s staring at a box marked “Milly’s Shit.” He’d wondering what he should do with the box and beyond; the tracking shot we get of the camera creeping up to the box signals this as a moment that’s locked in Woodrow’s mind as a moment of significance.

This scene is the present of Bellflower, the moment that has led Woodrow to imagine everything that we’ve hitherto already seen play out in the film and everything that we will see afterward. It’s the crux of the film and the point where Woodrow imagines two possible futures for himself. Everything before that point is a fixed certainty: It’s happened. But what comes after is a matter of fearfully idle speculation. The scene after Woodrow stares at Milly’s Shit—when he imagines lighting the match that will burn the box, watching as the flame flickers and unnaturally pausing for a second or three before it engulfs her things—illustrates, though it doesn’t necessarily explain, why Woodrow’s convinced he can’t change. Woodrow then considers what will happen if he sets fire to Milly’s Shit in such mordant detail that it doesn’t really matter if he actually strikes a match to do it; in his mind, the deed is already done.

After Woodrow lights Milly’s fire, hearing him whine to Aiden, “I fucked up, Aiden. I fucked up,” is totally devastating. Because it’s his way of confessing that no matter what they do and no matter how much they stroke each other’s egos, Woodrow will never allow himself to change his behavior beyond a point. Or, more importantly, in that moment in time, in that split second before the flame reaches Milly’s belongings, Woodrow cannot see an alternative to what he will do. In that moment, he has considered everything he’s done that has led him to staring at Milly’s Shit—and nothing beyond that calcified moment in time can change what comes next.