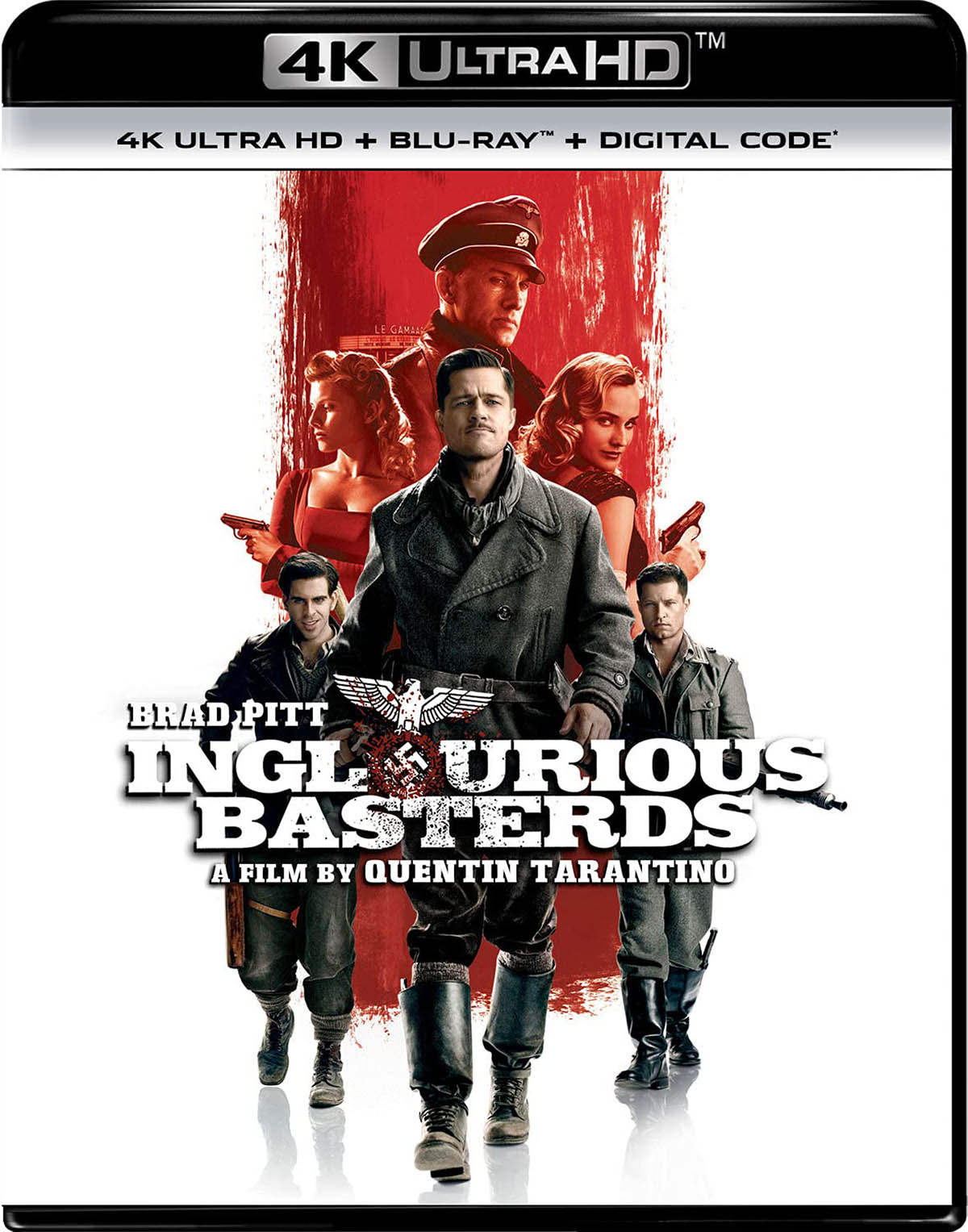 Everything is an allusion, a pose, in the films of Quentin Tarantino, right down to the font and colors that he uses for his title sequences—even the name of his production company, A Band Apart, which arrogantly asks us to think of him as our generation’s Godard. And how willingly we indulge him says plenty. Tarantino is as much creator as curator, and his overbearing cinephilia appeals to audiences who not only lost it at the movies but can’t seem to live without them: From Reservoir Dogs to his Kill Bill diptych, his films are solipsistic totems to his favorite things, and their effect is often suffocating.

Inglourious Basterds, a World War II-set revenge fantasy about the secret and sometimes not-so-secret maneuverings of a group of gung-ho Jewish-American Nazi hunters known as the Basterds, is no less meticulously engineered than Tarantino’s other pulp fictions. Except this one is more linear and humane than most, lush with dialogue that rings weighty even at its smuggest, and featuring women that actually sound and feel like real women—not just men (or, more accurately, Tarantino) in drag. The film sees Tarantino moving beyond just flaunting his attention-mongering cine-geekitude, as he actually seems to be scrutinizing his obsession with the cinema by cleverly placing it into an apt historical context.

Chapter one, the French countryside. Nazi colonel Hans Landa (a brilliantly fiendish Christoph Waltz) slinks into the home of a farmer with three bodacious daughters and a sterling command, like Landa, of the English language, sniffing for information as to the whereabouts of a missing family of Jews. Throughout this tense, impeccably crafted sequence, compromised only by the stupid, meaningless sight gag of Landa whipping out a freakish smoking pipe from his jacket, Tarantino keys his roving aesthetic to the homing-missile instincts of the Nazi snake, whose twisted use of language and inflection suggests a wristwatch dangling from the fingertips of a master hypnotist, manipulating the farmer into revealing that the Jewish family is hiding beneath his floorboards. Violence explodes—fabulously, yes, but without trivializing the value of human life—and as a girl escapes into the distance, in a perfect stylistic and thematic homage to The Searchers, a revenge plot is set into stunning motion.

The escapee, Shosanna Dreyfus (Mélanie Laurent), will go on to Paris, where she will inherit a movie theater from her aunt, playing works by filmmakers whose morals repulse her but whose art she nonetheless respects. It’s easy to ponder the life and work of tragic artistic figures like Roman Polanski and Emil Jannings (who appears later in the film, played by Hilmar Eichhom) throughout this chapter, which has Shosanna catching the eye of a popular young soldier, Fredrick Zoller (Daniel Brühl), who calls himself a German version of Sergeant York.

Even though it’s made without irony, you can see how this boast is off-putting to Shosanna, perhaps because the sincerity with which he makes the comparison is the problem: the way his belief that his heroism—revered in a propaganda film produced by Joseph Goebbels (Sylvester Groth) that will premiere in Shosanna’s theater—is no different than York’s doesn’t take into account the concept of goodness. A lushly intriguing grappling with morality, ideology, nepotism, and authorship, the entire chapter may be the deepest Tarantino has ever gotten.

It’s interesting the way characters work in unison, without knowledge of each other, toward committing the act of carnage that caps the last chapter—almost as if they weren’t planning a war but making a movie. (By conflating war and movies, and celebrating teamwork, you could say that Tarantino is slyly trying to defy the auteur theory.) Even the film’s more gleeful, purely geek-pandering chapters aren’t without their riches. When Lt. Aldo Raine’s (Brad Pitt) Basterds are introduced, it’s with a pulpy artistic bluster that matches the posse’s giddy bloodlust. Their agenda is never poignant (they don’t kill because they’re Jewish-American but because Nazis, you know, are evil—a no less valid rationale, really), but it’s still personal, as their need for blood makes sense as a means of putting off boredom.

Deprived of homegrown cinematic entertainment during the war, their acts of violence are ways for them to stage their own movies. Would that they did it more in a style familiar from the cinema of the ‘40s (their mode of expression is more Eli Roth than Jacques Tourneur), but this gripe almost becomes moot the second that Eli Roth himself walks on screen holding a bat with which he busts open Nazi heads. One walks into Inglourious Basterds expecting anachronism, but one doesn’t anticipate Tarantino’s frank confession that cinema, like killing Nazis for the Basterds, is a way to live out his male wish-fulfillment fantasies.

Inglourious Basterds is no masterpiece, mainly because as alternate history it isn’t profound, but for Tarantino it’s positively groundbreaking. He lingers in places where you expect him to cut, as in the way the camera remains on Shosanna’s face in one scene, watching it as it absorbs shock when the girl learns she’s in the company of the man who killed her family. For Tarantino, this is a masterstroke of restraint. Inglourious Basterds is a talkathon, but there’s real urgency and purpose to the words exchanged between Shosanna and Landa, between the German actress, Bridget von Hammersmark (Diane Kruger), pretending to be a Nazi and the German soldier understandably suspicious of the two men (Basterds in disguise) sitting with her in a basement bar, and between Aldo and the Nazis he and his Basterds scalp after death.

Tarantino’s dialogue throughout is more than just witty, as it also exudes feeling, dread, and risk. How and why people speak to each other, or how and why they chose not to, becomes a panic far more chilling than any display of violence in Inglourious Basterds. Tarantino’s words pop, but no longer do they exist entirely to flatter his audience’s pop know-how, but to illuminate the politics of communication and survival during WWII.

Universal brings Inglourious Basterds to ultra-high-def from the same 2K digital intermediate that was used for the original Blu-ray. Bolstered with HDR10+, Robert Richardson’s luminous cinematography looks unbelievably resplendent, particularly the film’s striking use of red. Flesh tones are natural throughout, while black levels in the darker scenes set in cellars and backrooms are consistently deep. The soundtrack is the same 5.1 DTS-HD surround track from the Blu-ray, but no upgrade was necessary as that track was already a reference-quality one, especially for its volume control. This is a film abundant in explosive action sequences and boisterous needle drops, and not a single second succumbs to distortion or speaker buzz.

For this disc, Universal has ported over all of the extras from their original home video release of the film from 2009. That includes a few extended and alternate scenes that mainly highlight the late Sally Menke’s gift for streamlining Tarantino’s dialogue, as well as a full six-minute cut of the Nation’s Pride film-within-the-film shown during the climax. There’s even a parodic making-of documentary of this piece of fake Nazi propaganda, with actors appearing in character as various German filmmakers and officials weigh in on the “project.” A roundtable discussion between critic Elvis Mitchell and Tarantino and Brad Pitt is the most substantial feature here, as the trio delves deep into Tarantino’s methods and the making of Inglourious Basterds. Also of note is the montage of Tarantino’s foul-mouthed clapboard girl and the now poignant featurette in which the cast and crew goofily say hello to Menke.

Quentin Tarantino’s film looks better than ever on Universal’s 4K disc, though the lack of a new 4K transfer from the negative leaves open the possibility of a superior future release.