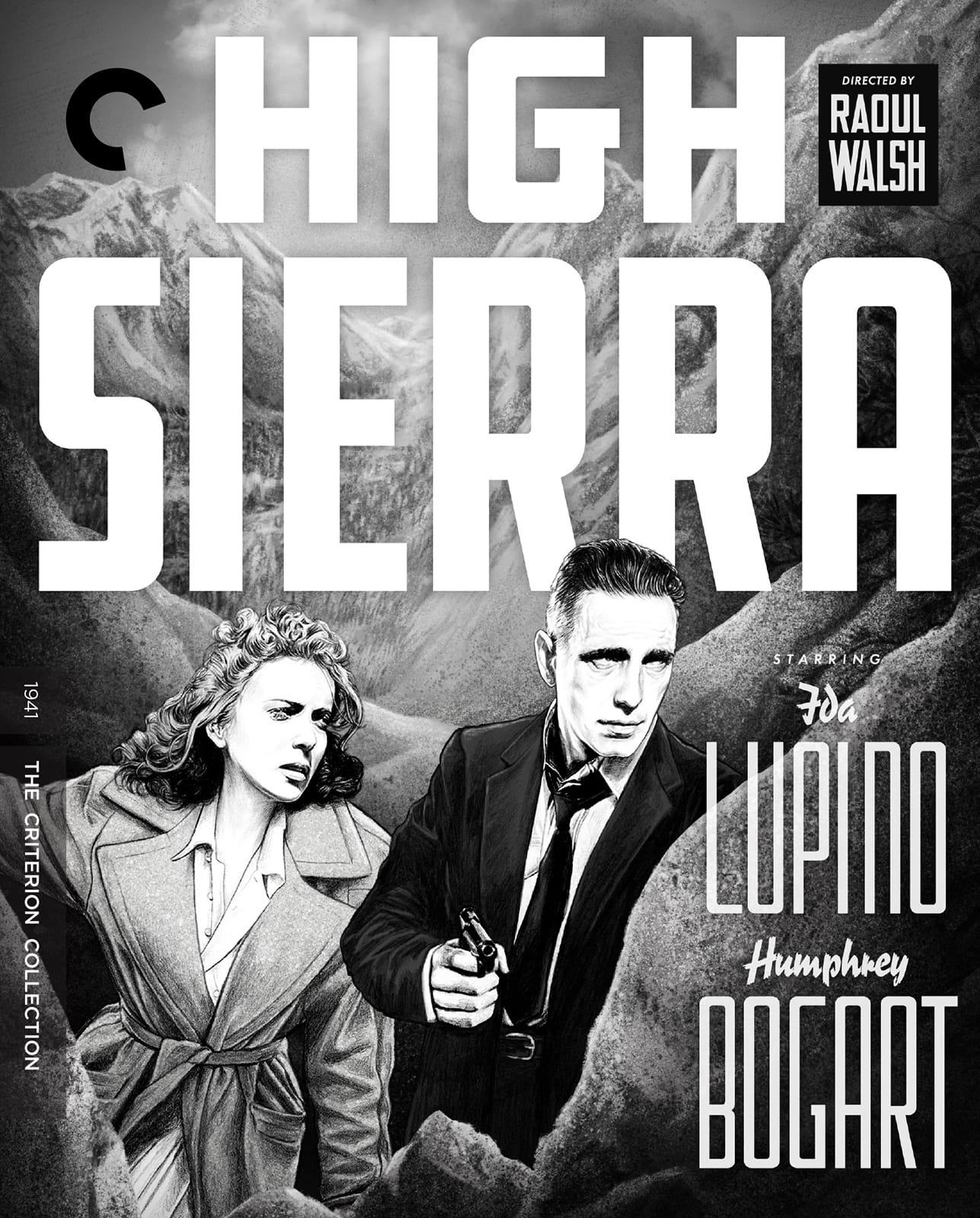 Roy Earle (Humphrey Bogart) is a crook who couldn’t go straight even if he wanted to. Pardoned out of prison at the start of Raoul Walsh’s High Sierra thanks to a little string-pulling by aged gangster Big Mac (Donald MacBride), Roy owes his freedom to the fact that his services are needed for a heist that will likely send him right back to the pen. Roy’s reputation precedes him, and much to his chagrin, because when Big Mac dispatches him to the Sierra Nevada mountains to lead a heist at a ritzy California resort, he finds that even rural farmers have heard tell of his exploits.

A true journeyman in the Howard Hawks style, Walsh had by this point in his career extensive experience making westerns, comedies, dramas, and even musicals. Two years prior, his ferocious gangster film The Roaring Twenties belatedly sent the pre-Code era of the crime epic out in lavish, excoriating style. And with High Sierra, Walsh revealed a keen understanding of how to shift the blunter brutality of the mob movies of the 1930s toward the more evocative, philosophically disquieting realm of noir.

Walsh and screenwriters John Huston and W.R. Burnett quickly get much of the exposition out of the way, introducing all of the key players and gathering them together in a mountain hideout where the cramped conditions fuel all sorts of tensions. High Sierra soon becomes less about the robbery itself than the sad spiral into which the characters are locked, with Walsh’s minimal setups leaving ample space for the actors to explore the way that their characters are no less troubled by loneliness just because they’re in close proximity to others.

Much of the film’s emotional and psychological weight rests, of course, on Bogart. No actor before or since radiated world-weariness so intensely, and he suffuses Roy with a self-loathing that only deepens the thief’s flashes of menace. When one of his accomplices, Louis Mendoza (Cornel Wilde), starts to show too much enthusiasm for the job, Roy subtly warns the man about the dangers of flapping one’s lips too much in this line of work by relating the story of a rat whose end came at the end of a Tommy gun. All the while, Roy lightly raps his knuckles against a violin case to simulate the sound of gunfire and Louis’s face goes ashen. Such glimpses at Roy’s repressed rage belie his attempts to get out of this line of work, though the man radiates earnestness at dreaming of something besides a life on the lam.

Around Roy, others are equally trapped in miserable, dead-end lives. Though Big Mac manipulates Roy into falling back into crime, the gangster is depicted as more pitiful than reprehensible, a dying man whose obsession with pilfering rich tourists’ jewels before he passes beyond the veil is a grim reminder that no one ever makes it out of this life. One thief’s moll, Marie (Ida Lupino), latches onto Roy with immediate and unquestioning loyalty because she sees in his reluctance her own shame over her past. On the flipside, Roy falls for Velma (Joan Leslie), a young woman with a clubfoot whom the man clearly fetishizes for her image of innocence. Revealingly, though, after Roy arranges for her to get corrective surgery and confesses his love for her, she callously rejects him, shattering his image of her by hungrily fantasizing about all the racy living she can experience now without a disability.

Though much of it is taken up by morose exchanges between its characters, High Sierra maintains a fleet sense of movement. Many of the film’s scenes are stitched together with quick fade-outs, which reflect the headspace of a protagonist who’s always brooding about his lot in life but never truly ruminating on the choices that got him here. As an underworld doctor (Henry Hull) who knows Roy tells him, people like him are “just rushing toward death,” and the final showdown between Roy and the cops who track him down feels less like the inevitable result of Hays-era morality standards than the heavy wheel of fate that starts to crush the has-been robber from the second he steps on screen.

Sourced from a 4K restoration, Criterion’s disc brings out the most in High Sierra. Grain distribution is film-like and details are sharp enough to make out small details like the deliberate haloing effect in close-ups of the film’s female characters or the glint of light off of metal. Most impressive is the clarity of the location shots, with the many mountain vistas never washed out by the bright sunlight refracting off of snow-covered peaks. The original mono soundtrack is nothing special, but its dialogue, music, and Foley effects are all cleanly separated and the track shows no signs of age given the absence of hiss or other issues.

A second disc contains Raoul Walsh’s 1949 film Colorado Territory. Fully sublimating High Sierra mountain setting into a western, the film showcases Walsh’s mastery of cross-mixing genres and is every bit the equal of the main feature. The transfer comes from an unrestored print, but there are only a few nagging instances of scratches or other print damage on what is an otherwise fine, stable image. Elsewhere, we get a new conversation between critics Dave Kehr and Farran Smith Nehme, as well as a video essay based on interviews with W.R. Burnett, the author of the film’s source novel. There are also archival documentaries and interviews about the film, Walsh, and Bogart, plus the film’s 1944 radio adaptation.

Raoul Walsh’s haunting High Sierra receives a packed release from Criterion, boasting an excellent transfer, informative bonuses, and even another one of the director’s features.