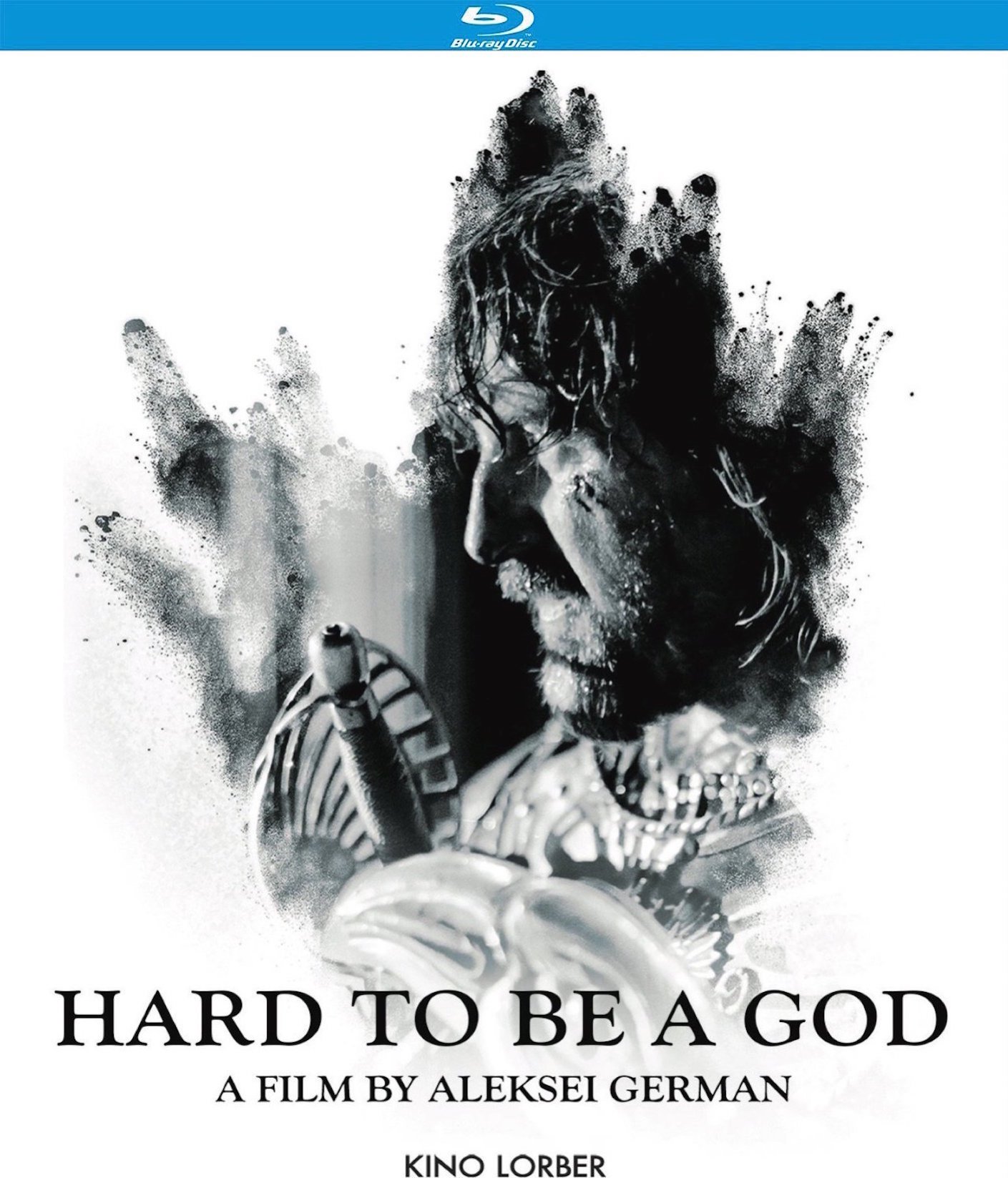 “God, if you exist, stop me.” This is one of the half-conscious utterances made by Don Rumata (Leonid Yarmolnik) in the latter half of Aleksei German’s Hard to Be a God as he contemplates a killing spree on the morally bankrupt planet of Arkanar. As a scientist originally sent from Earth to neutrally investigate the planet’s Dark Ages because its crazed inhabitants have been snuffing out their few remaining intellectuals, he’s been strictly advised against any kind of physical intervention, but that matters little at this point; nothing short of a divine occurrence could halt or delay his inexorable descent into madness. What’s most haunting about the phrase—delivered, like all of the film’s democratized dialogue, in a tremulous grumble that barely competes with the surrounding clamor of swaying chains and leaking orifices—is its sense of reflexive submission, the underlying implication being that when exposed long enough to a civilization cast off from common decency and deep in a moral void, the loss of reason and even sanity is a definite eventuality.

For German, who grew up in Stalin’s Russia while Nazism was taking hold just west of the border and whose career continually dwelled on this shadowy historical period, this downward psycho-trajectory would seem to be something he understood well. And yet, Hard to Be a God never explicitly gestures in any particular allegorical direction; instead, its scope seems to encompass any of the widespread breakdowns of civility that have dotted, sometimes with what seems like a seasonal regularity, the history of mankind. The world of Hard to Be a God has no context, no past or future—only a horrible, self-defeating now. This is expressed by German via one of the more impressive stretches of sustained present-tense cinematography in the medium’s lifespan—an I Am Cuba-by-way-of-On the Silver Globe use of a roaming wide-angle camera eye. It’s a camera that stays alongside Don Rumata, almost always keeping him in the frame and seeing the muck and grime that he sees, without ever actually adopting his perspective.

In fact, one of German’s most idiosyncratic inventions here is the treatment of the camera as its own participant in the action, as though it were being manned by a documentarian who’s never explicitly addressed. We often find ourselves sharing direct eye contact with hideous men who’ve paused to strike a glance at the lens—little medieval photo bombs that distract from whatever ostensibly important narrative information is being conveyed behind them. Other times, objects are dangled in the foreground as though those holding them were trying to create crude 3D effects, if not to harass the camera operator. This isn’t to mention the numerous times when the lens can’t help but bump into things. Shifting camera position even a few feet usually entails bushwhacking through hanging rabbit carcasses, ambiguous metallic utensils, bulbous root vegetables, and other well-stocked provisions that have been hung up without any apparent intention of ever being used. German’s film is a 2D experience bursting with stereoscopic techniques, and the cumulative effect is of a screen overstuffed with detail. The choice of what to look at—and what to look away from—is ours.

Naturally, the film’s story arc, loosely adapted from a novel by Arkady and Boris Strugatsky, becomes obscured under all this sensory bombardment. Repeat viewings can work to clarify the specifics of the scenario, but the vividness of the film’s tonal arc is even more important. Don’s gradual deterioration from bemusement to aggravation to dementia isn’t triggered by any particular awful incidents; save for a few creatively grisly deaths toward the end, the film’s misery quotient could be characterized as a flat line. Instead, it’s merely the relentless accumulation of senseless barbarism that weakens Don’s consciousness and simultaneously worms its way into ours. One vignette in the final stretch crystallizes the extent of the movie’s desensitizing filthiness: A young boy, clad in sheets of cracked black leather, wades through muddy water to collect some fecal matter deposited from the ass of a corpse lying in a pool of bubbling tar, then dangles the sample over another dead man’s mouth—all with a straight face. Hard to Be a God is a hypnotic film about the erosion of self-awareness (the perfect final lines reinforce this idea) and, in its place, the creation of a world where such lunacy is just an involuntary instinct.

For a film of such revolting tactility, anything less than the eye-popping high-definition work provided here by Kino Lorber would be unsatisfactory. Sweat glistens off foreheads, snowflakes pop out from overcast skies, and pools of mud emanate a rich, gurgling darkness. The one small drawback to an otherwise pristine transfer is the occasional loss of detail in the highlights—though, given the amount of fog added to nearly every location and the ethereal use of strong backlight, this was likely a necessary compromise in enhancing the textures of the film’s shadowy regions. Sound is equally sharp and meticulous: Without a musical score to balance, Kino Lorber focuses attention on the diverse sonic minutiae of Hard to Be a God’s universe, drawing out fidelity from something as seemingly marginal as a throat-clearing grunt heard off screen.

Kino Lorber’s release takes a hit in the extras department, despite boasting two supplements that sound, on the surface, like promising avenues for deeper immersion into the film: a 44-minute behind-the-scenes documentary that’s really more of a crudely cut stream-of-consciousness interview with Aleksei German in some dingy prop closet, and a half-hour introduction by German’s wife and co-screenwriter Svetlana Karmalita. The latter is ambiently shot from a balcony at a Paris cinematheque and the spirit of whatever Karmalita’s trying to articulate is marred through the drawn-out translation process—no fault of her own, of course, but could a quick sit-down interview really have been too hard to coordinate? Both pieces will probably fare best for German enthusiasts more predisposed to interpreting a vague pronouncement like “cinematography has more or less lost its social consciousness,” but on the plus side, there’s Aliza Ma’s comparatively lucid pamphlet essay and Aleksei German Jr.’s touching tribute article.

A massive, decades-in-the-making cinematic achievement has received the comprehensive home-video treatment and that would be something to celebrate even if Kino Lorber hadn’t risen so faithfully to the occasion.

Review: Valerie and Her Week of Wonders on Criterion Blu-ray