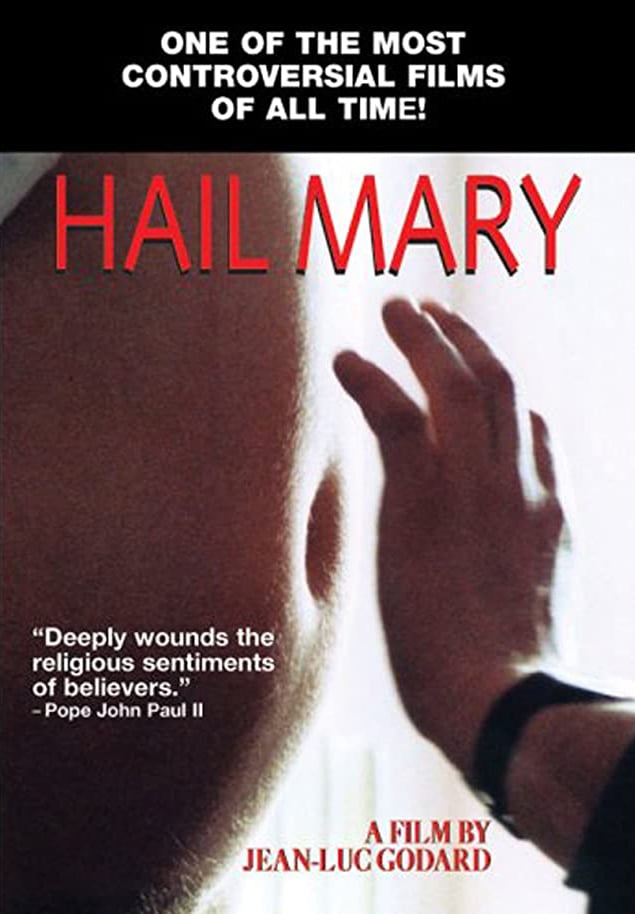 Like Roberto Rossellini’s The Miracle before it and Scorsese’s The Last Temptation of Christ after it, Hail Mary became a cause célèbre on subject alone, berated by the Pope and picketed by religious groups before it could even open. Also like those films, it’s a profoundly felt, gravelly beautiful work of faith, where the potentially parodist aspects of the premise (the Nativity story recast in modern-day Geneva) are consistently tempered by august contemplation. The tenderly reverential attitude of the film would seem surprising coming from Jean-Luc Godard, had it not been so much a part of the great French filmmaker’s mellow, ruminating period of rediscovery. Just as Every Man for Himself inaugurated the ‘80s by resurrecting his human interest that had been pulverized in favor of militant indoctrination, Hail Mary marks the decade’s midway point by taking its spiritual temperature. The Bible may provide the outline, but Godard’s version isn’t a Classics Illustrated retelling: Teenage Marie (Myriem Roussel) plays basketball when not pumping gas at her father’s station, taxi driver Joseph (Thierry Rode) is her sexually frustrated boyfriend; a jet whooshing overhead announces the arrival of testy, unshaven Gabriel (Philippe Lacoste), who jumps into Joseph’s cab and tells the virginal Marie of her pregnancy.

Set to gusts of classical music and punctuated with images of nature (sunsets, rippling water, rustling trees), Hail Mary is limpid, serene, and, for all the pubic hair on display, glowingly chaste. The copious doses of female nudity, the main factor in raising the ire of protesters, are in fact central to Godard’s incantation of the intangible. “Does the soul have a body?” Marie asks her gynecologist, and it is by focusing on their bodies and surfaces that the director can extract the characters’ soulful essences into the open. It is often forgotten that Godard’s picture was always meant as a companion piece to The Book of Mary, Anne-Marie Miéville’s lovely 25-minute short about a couple’s imploding marriage as viewed by their young daughter; besides setting the melancholic tone and supplying the formation of a consciousness as its structure, Miéville’s short anticipates and complements Godard’s in the weight and intensity given to objects and bodies. This sense of physicality becomes enlarged in the film, where the movements of women throwing a basketball around are as imbued with wonder as the child growing inside Marie’s belly; then again, Godard has since Breathless linked the mysteries of womanhood with the mysteries of the universe, and Marie’s nude body, tossing and turning painfully in bed, is less fetishized than aestheticized as the earthly representation of an aching soul’s trajectory toward enlightenment.

It’s tempting to see Hail Mary as Godard’s twilight armistice with the Christianity that, back in 1967, was just another bourgeois commodity roasted in the Weekend pit. Yet there is a sense in which the radiant spirituality of the picture emerges less from his belief in a rigid set of religious rules than from his faith in cinema’s capacity for embodying the exalted emotions of religion: The ultimate instrument of modernist analysis, Godard’s cubist fragmentation of image and sound suggests here an ongoing struggle to bring body and soul together. “Despair” is routinely used to describe the tone of the filmmaker’s later period, yet, because the post-Dziga Vertov Godard believes as deeply in the power of the medium as the young cinephile of the Cahiers du Cinéma era, the film’s feeling is ultimately one of refreshed hope. Indeed, Hail Mary’s last 10 minutes or so remain among the most life-affirming movements in the director’s career, bringing together form and content to celebrate the title character’s celestial awareness and, possibly mirroring the auteur’s own spiritual renewal, a new chance for humanity.

The sensuousness of Godard’s images is not quite damaged by the somewhat slapdash transfer, though the full-frame dents the supernal quality of the framing. The sound almost makes up for it, capturing the dense aural mosaic of voices, music, and the murmurs of nature.

Since the inclusion of The Book of Mary cannot really be counted as an extra, the sole item of interest is “Notes About Hail Mary,” a 1983 featurette (“not a demonstration, just some notes”) assembled by Godard. The disheveled director appears briefly as a fuzzy image on his video monitor, but remains mostly a spectral voice hovering around the edge of the image. Packed with film allusions, title cards, and evocative dissolves, the behind-the-scenes footage is no less layered than the movie itself, but, despite priceless bits (such as Godard directing Roussel by playing her two different Bach pieces), it’s scarcely illuminating stuff. The international theatrical trailer is also included.

“What is flesh alone?” Godard’s supernal meditation sublimely surveys the body while reaching for the heavens.