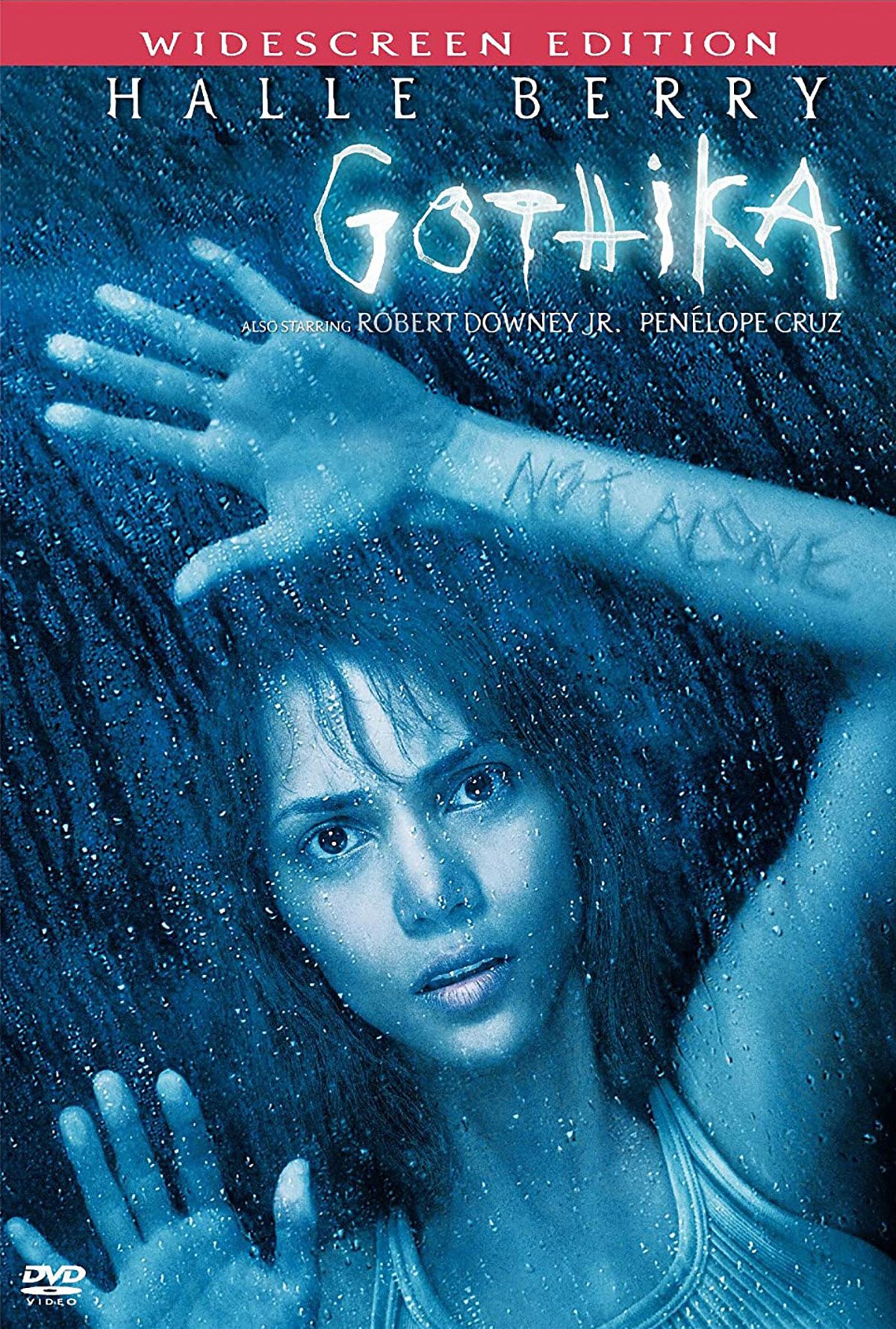 Mathieu Kassovitz followed the success of La Haine with Assassin(s) and, three years later, the underrated Crimson Rivers, a serial killer spooker that was self-conscious to a fault (not unlike Fincher’s Se7en, a major point of reference) but succeeded in part because of its coy old-school groove and numerous references to Argento classics. Kassovitz sells his soul to the devil with the inexplicably titled Gothika, the ridiculous story of a criminal psychologist, Dr. Miranda Grey (Halle Berry), who wakes up after a car accident inside the very psych ward she supervises daily. As written by Sebastian Gutierrez, this preposterous creation plays out like Scary Movie minus the intended laughter. This virtual tour of horror films past goes back as far as The Exorcist and intercepts The Sixth Sense, Stigmata, What Lies Beneath (note: Robert Zemeckis is the film’s executive producer), and Gore Verbinski’s The Ring along the way. Crummy Hollywood horror films always need a serious spiel and though Gothika pretends to be concerned with the struggle between science and the supernatural, every character in the film wears this shtick like a placard. Amid the heavy breathing and even heavier rainfall, the film’s actors ruminate on “objective reality” and “dream logic,” but they sound less like clinical psychologists than puppets reciting lines written by someone who’s just finished skimming a Psychology 101 textbook. Even worse than the psychological buzz terms the filmmakers use to talk down to their audience are the ludicrous allusions Berry is forced to deliver sans irony. After an encounter with Chloe (Penélope Cruz), a patient who claims that she’s being raped by the devil, Miranda tells her husband, “If I’m the mirror and she’s the image, then who are you?” Add to that the endless blinking lights, rewinding film stock, loud noises, and peek-a-boo appearances by a ghostly, stringy-haired nymphet (yawn), and you have a film that’s obviously more concerned with style and guesswork than substance. Gothika doesn’t pretend to make a lick of sense, but if the film is pretense-free, it’s also dangerously immoral. In its attempts to repeatedly pull one over on us, the film not only ignores the dialectic between reality and the avenging, inexplicably violent spirit world it pretends to acknowledge, but it also makes a mockery of rape and insanity. The seriousness with which Berry treats her role is surpassed only by Cruz’s loony, hooked-on-phonics performance. Cruz not only chews the scenery, she pisses on it and begins chewing on it again. Bless her Spanish little heart (not to mention her right tear duct) that she can wail a line like “He opened me like a flower of pain” without busting a gut.

The image quality on this two-disc Gothika DVD is probably a matter of taste. Personally I find Matthew Libatique’s cinematography unexcitingly monochrome, but save for some noticeable dirt throughout (and the occasional edge enhancement), this is a top-notch transfer. The audio is infinitely superior. Perhaps the best example of the expert surround work on display here happens during Halle Berry’s rainy encounter with the film’s ghost girl: Berry’s voice is on the left, the radio announcer’s voice is on the right, and everything else (rain, screeching tires) explodes from every other channel. The experience is truly enveloping.

Director Mathieu Kassovitz and cinematographer Matthew Libatique talk very generally about Gothika for 98 minutes on the limp commentary track included here. The insight is strictly of the “we were going for a very moody look” variety. Zzzzzzzzz. Rounding out the first disc is Limp Bizkit’s “Blue Eyes” music video starring Halle Berry. On the MTV-approved second disc you’ll find the making of the “Blue Eyes” video and the episode of Punk’d where Ashton Kutcher’s minions gave it to Berry at the film’s red carpet premiere. On “On the Set of Gothika,” Berry goes on at length about how “character driven” the film was before the focus shifts to Kassovitz’s “improvisational” style on the set. Rounding out the disc is a “Painting with Fire” special effects featurette and a visually nifty but corny interactive tour of Dr. Grey’s Office at the Woodward Penitentiary, which allows you to look through the psych ward’s inmate files.

Penelope, thanks for the memories: “He came back again last night and tore me like paper. He opened me like a flower of pain, and it felt good.”

DVD Review: Georges Franju’s Eyes Without a Face on the Criterion Collection