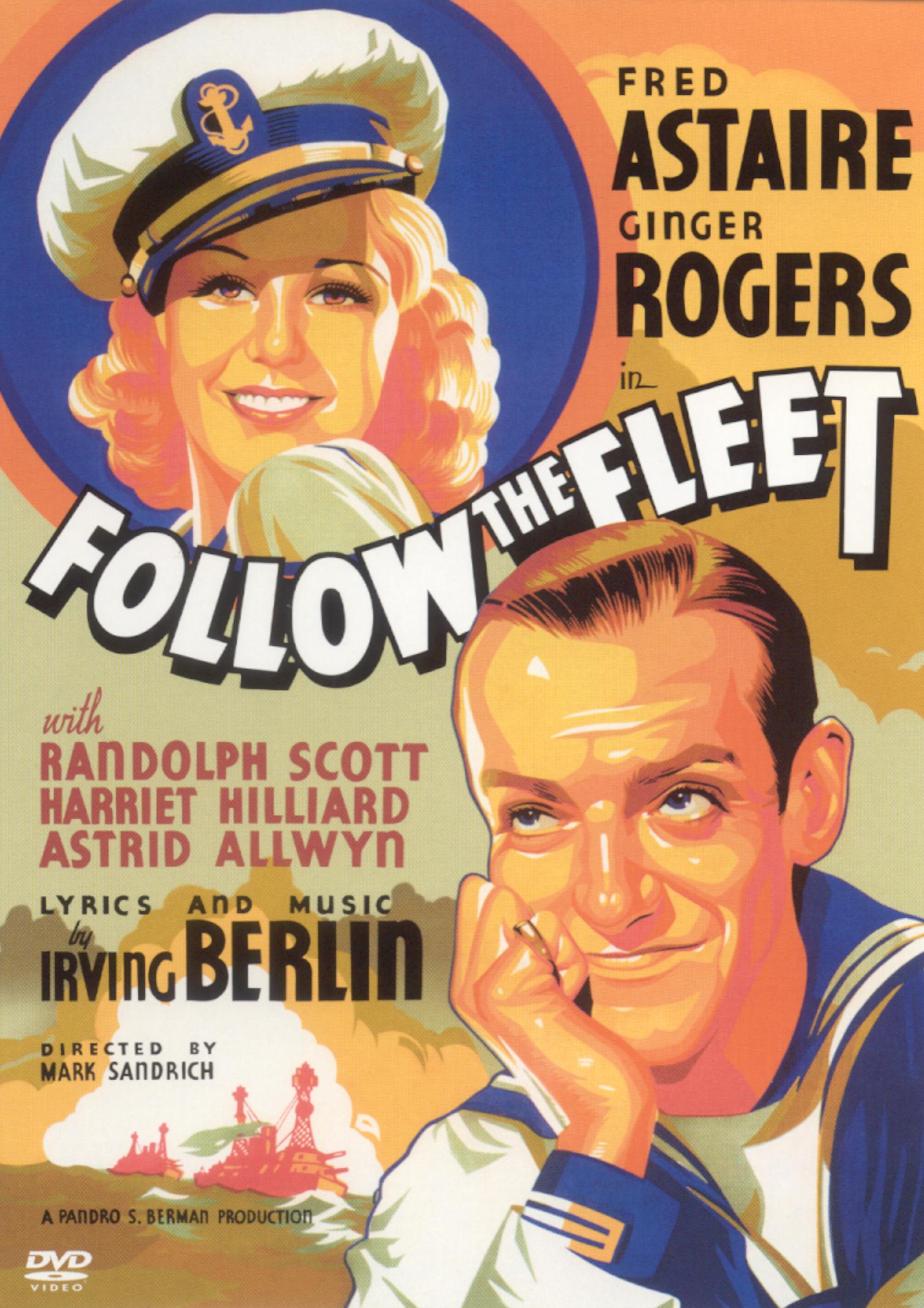 Burdened with a dull plot but blessed with a rousing Irving Berlin score, Follow the Fleet is a problematic but rewarding Fred Astaire/Ginger Rogers film. It brings them away from their Art Deco salons and mistaken identity plots and into tacky ‘30s dancehalls and shabby kitchenettes. The film introduces Rogers bending over in satin pajamas, and you stare at her ass long before you see her face. This sort of vulgarity suits Ginger, and she’s much more comfortable in the film’s milieu than her rarified partner. Cast as a sailor, Astaire is cheerfully unconvincing (the sight of him chewing gum is a hilarious visual oxymoron). Far too much of Follow the Fleet is taken up with a romance between sexy Randolph Scott and dreary Harriet Hilliard, whose solo song numbers, “Get Thee Behind Thee, Satan” and “But Where Are You?” were usually cut for television showings of the film, and they should be.

Two Astaire/Rogers numbers, “Let Yourself Go” and “I’m Putting All My Eggs In One Basket,” seem to explode with Rogers’s sense of daring and mischief. The first has them in a dance contest where they are intercut with actual exhibition dancers recruited from Los Angeles ballrooms. The number builds joyously as they consistently top the other couples; part of the fun is how airy and deadpan they are about their own loose-limbed mastery. The second number is a rehearsal routine that turns into a comedy spot for Rogers where she does the old vaudeville gag of getting stuck in a step. Rogers’s comic precision here is worthy of the silent clowns, and it’s amusing to watch her put Astaire on the spot. At one point, Astaire does some flighty dancing off to one side while Rogers continues her comic frustration routine. It’s one of the few numbers in their films where they acknowledge their profound differences. Usually, continental Fred tries to turn snappy, low-class Ginger into a romantic abstraction, like he is, but here she isn’t having it. She asserts her individuality up until the film’s final number, “Let’s Face The Music And Dance.”

This famous dance is a self-contained story of its own. Astaire gambles away his money. Friendless and ignored by everyone (including a blond Lucille Ball), he takes out a dainty little gun to shoot himself. Rogers comes out and tries to jump off a ledge. He saves her and jauntily shows her his gun. She makes a blind grab for it, then leans against a pillar. Then Astaire starts to sing….it’s absolutely ridiculous, really. But there’s a heavy yet moving sort of theatricality about the number, aided by the massive-looking, oppressive Deco set. Their movements are fairly simple here, with lots of walking steps and depressive turns (this may be because Rogers was wearing a beaded, see-through dress that reportedly weighed 35 pounds). It’s a dark-spirited dance in a minor key about desperation and loneliness, and it has an audacious ending: they land together on bended knees, then exit with their knees thrown up and their heads thrown back at us dramatically. Follow the Fleet’s dances are dominated by Rogers’s brassy sensibility, but Astaire wins her back to his world in this last transcendent number where they literally fly away from Earth.

The print of Follow the Fleet that played on television during the ‘80s and ‘90s was just atrocious (you could barely see the image through all the scratches). The image here is splendid, and a great relief. The sound, however, is tinny and sometimes muffled.

A featurette that has info about the beginning of Fred and Ginger’s career called “Follow the Fleet: The Origins of Those Dancing Feet,” a short, “Melody Master: Jimmie Lunceford and his Dance Orchestra,” a cartoon, “Let It Be Me,” and a theatrical trailer.

Some of Fred and Ginger’s best numbers, but get thee behind me, Harriet Hilliard.