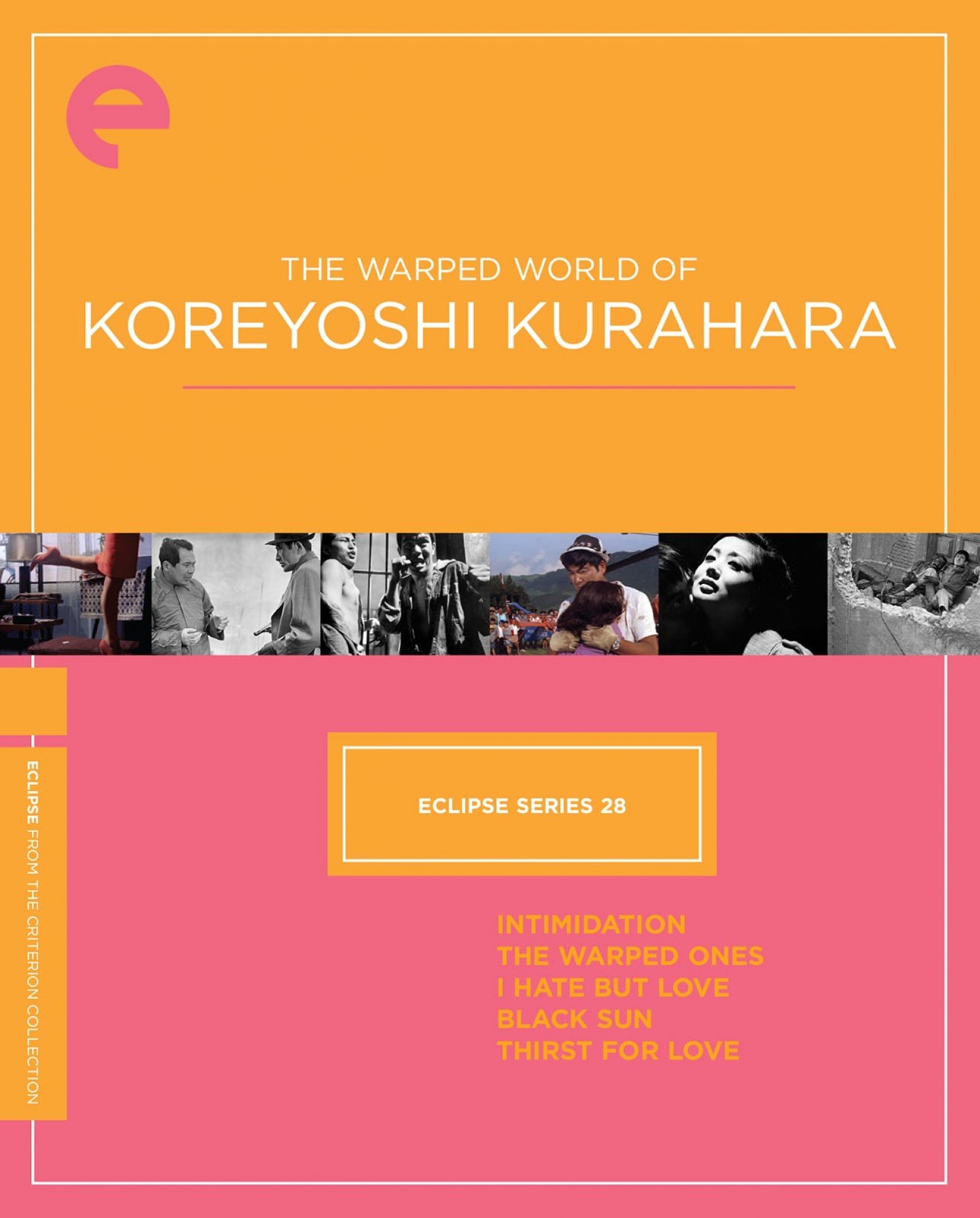 Brimming with frenetic movement suddenly paralyzed by freeze-frames and extreme changes of angle that have the camera gazing down at the characters or straight up into the blazing sun, the five films directed by unsung Japanese craftsman Koreyoshi Kurahara included in Criterion’s 28th Eclipse series more than live up to the set’s subtitle (“Warped World”). Though his career spanned 40 years and encompassed touristic travelogues, Hiroshima dramatizations and even grimly Disneyfield canine adventures, it was his early years spent at Nikkatsu Studio in the early 1960s that seem most ripe for discovery, a period when the director’s stylistic daring overlapped with the country’s own junction of transition and inquiry. Situated somewhere between the prankish anarchy of Seijun Suzuki and the veiny genre implosions of Kinji Fukasaku, Kurahara was perhaps more artisan than artist, but his innovative galleries of turning worms, anxious juveniles, and jazzed-up maniacs remain marvels of volatile rhythms and frantic impulses piercing through façades.

Appropriately for a director so fascinated by aggressive, unbalancing forces, the set’s earliest film, 1960’s Intimidation, kicks off with a train barreling through the screen, as much of a raucous, smoky, normalcy-disrupting beast as the one carrying Uncle Charlie into town in Hitchcock’s Shadow of a Doubt. Hard-charged opening salvo notwithstanding, the film is more chess match than demolition job, a twisty slow-burner that, with its ensnared protagonists and shadowy, claustrophobic settings, wouldn’t be out of place in the earlier “Nikkatsu Noir” Eclipse set. The main adversaries are a fast-rising banker (Nobuo Kaneko) and the blackmailer (Kôjirô Kusanagi) who knows about his embezzling past, with a doleful office drone (Akira Nishimura) quietly emerging from pitiful fall-guy to ruthless schemer. Sharing with Kurosawa’s concurrent The Bad Sleep Well a critique of unscrupulous corporate skullduggery and class divides, it’s a tension-fraught grid of formalist compositions and sweaty close-ups where everybody seems to wear some kind of mask, power changes hands in the blink of an eye, and crushed souls finally snap back with a vengeance.

To go from Intimidation to The Warped Ones, also made in 1960, is a study in contrasts. Where the earlier film is hemmed-in, nocturnal, and impeccably controlled, Kurahara’s contribution to the “sun tribe” subgenre—portraits of youth running wild that were closer to Roger Corman’s gleeful ‘60s nihilists than to Nicholas Ray’s sensitive ‘50s brooders—is wide-swinging, enthralled by sunlight and water and sand, and bursting with handheld camera movements. Jazz is the form here, as a metaphor for the nascent decade in which traditional morality gives way to more liquid personal mythologies, and also as the music of choice of the main character (Tamio Kawachi), a teenage troglodyte and pure-id figure who, just out of juvie, barnstorms through Tokyo in a maelstrom of theft, rape, and revenge. Taking its cue from Kawachi’s heat-seeking, appetite-driven rampages, the camera slides, struts, and rages, contrasting the troubling vitality of his mix of confusion and bravado with the repressed drives of the more upright characters. (Kurahara highlights this contrast in a hilarious scene with atelier-dwelling sophisticates who admire “these wild types” until they get too close for comfort.) Though lacking the searching rigor of Nagisa Oshima’s thematically comparable Cruel Story of Youth and The Sun’s Burial, both released that same year, The Warped Ones still manages to thrillingly slash conventions all the way down to its still caustic punchline.

On the surface, he 1962 comedy-drama I Hate But Love seems like the set’s odd mallard, and not just because it’s a rare Technicolor splash in an otherwise starkly chiaroscuro universe. Following a superstar disc jockey (Yujiro Ishihara) as he motors across the nation on a “humanistic journey” with a slew of reporters and his manager/platonic girlfriend (Ruriko Asaoka) hot on his trail, the film has all the redeemed-rake and delayed-fuck tropes required for a glossy Ross Hunter romp. If all the parts are in place, however, the assembly remains intriguingly unsettled. (For starters, can one imagine a scene of Rock Hudson force-dunking Doris Day’s head into a bathroom sink, like the warring lovers do here during one particularly jarring interlude?) There’s a fascination to the discrepancy between the film’s insistently perky musical score and its essentially humorless view of ennui and desperation, to the jangled nerves that seem to lurk just below every repellent bit of cuteness. The search for romance is the plot’s nominal drive, but the central image is that of the couple literally tottering on the edge of a precipice.

As in I Hate But Love, 1964’s Black Sun is a work where the contradictions and contrasts are already visible in the film’s very title. But it’s as a partial reworking of The Warped Ones that it functions most captivatingly, using the same actors to expand a subplot from the earlier film (the juvenile delinquent’s friendship with a black American expatriate) into a seething parable. Tamio Kawachi this time plays a slightly less psychotic, more vulnerable version of The Warped Ones’s young jazz aficionado, a resourceful scavenger whose crumbling-church hideout is one night visited by a wounded, half-crazed, machine gun-wielding Yankee G.I. (Chico Roland) wanted for murder. At first delighted to have what he assumes is a soulful musician by his side (“Negro jazz, I love you,” he sputters in broken English to the bleeding fugitive), Kawachi quickly finds himself stuck with him in what plays like a perversely contorted travesty of The Defiant Ones. The conflation of the struggles of black Americans and Japanese misfits in occupied postwar Japan is often broad, but Kurahara keeps finding striking images that push his simplistic messages toward zones of sheer surreal anger. Fervently trying to catch moments of human connection amid sprawling landscapes of garbage and filthy oceans, the film builds to a vision of alienation and sacrifice that would be laughable if it weren’t so potent.

If Black Sun is a bluesy wail, Thirst for Love is a gothic murmur. Adapted in 1967 from a novel by Yukio Mishima, it stars Ruriko Asaoka as a young widow hungering for punishment while trapped in a web of patriarchal rule and illicit affairs, a role that seems radically different from her agitated sweetheart in I Hate But Love until one notices the tremor of repressed erotic hysteria Asaoka subtly brings to both parts. Kurahara makes use of an ample arsenal of cinematic effects—abrupt disjunctions of sound and image, intertitles alternating with inner monologues, strategic flashes of lurid color following sudden bloodbaths—to visualize the voluptuous turmoil of Mishima’s avant-garde writing, all while exploring his own motifs of fears and desires churning under tidy surfaces. Coming after the set’s more febrile tales of obsession, Thirst for Love quietist tone becomes all the more disturbing, a paradoxical note all too fitting for the creator of these warped yet vital worlds.

Transfers are sharp across the board, with particular attention given to Thirst for Love’s tactile surfaces (when the heroine nicks her father-in-law’s neck while shaving him, you can almost feel the razor). Intimidation’s deep shadows and The Warped Ones’s pulverizing sunlight come across vividly, even if the hues of I Hate But Love don’t seem to quite pop like they should. The mono tracks, often throbbing with jazz solos and punctuated by the occasional shrieking bird, are similarly strong.

Jazzy blasts and meticulous traps come together in this Eclipse set for one of Nikkatsu’s versatile, unheralded provocateurs.