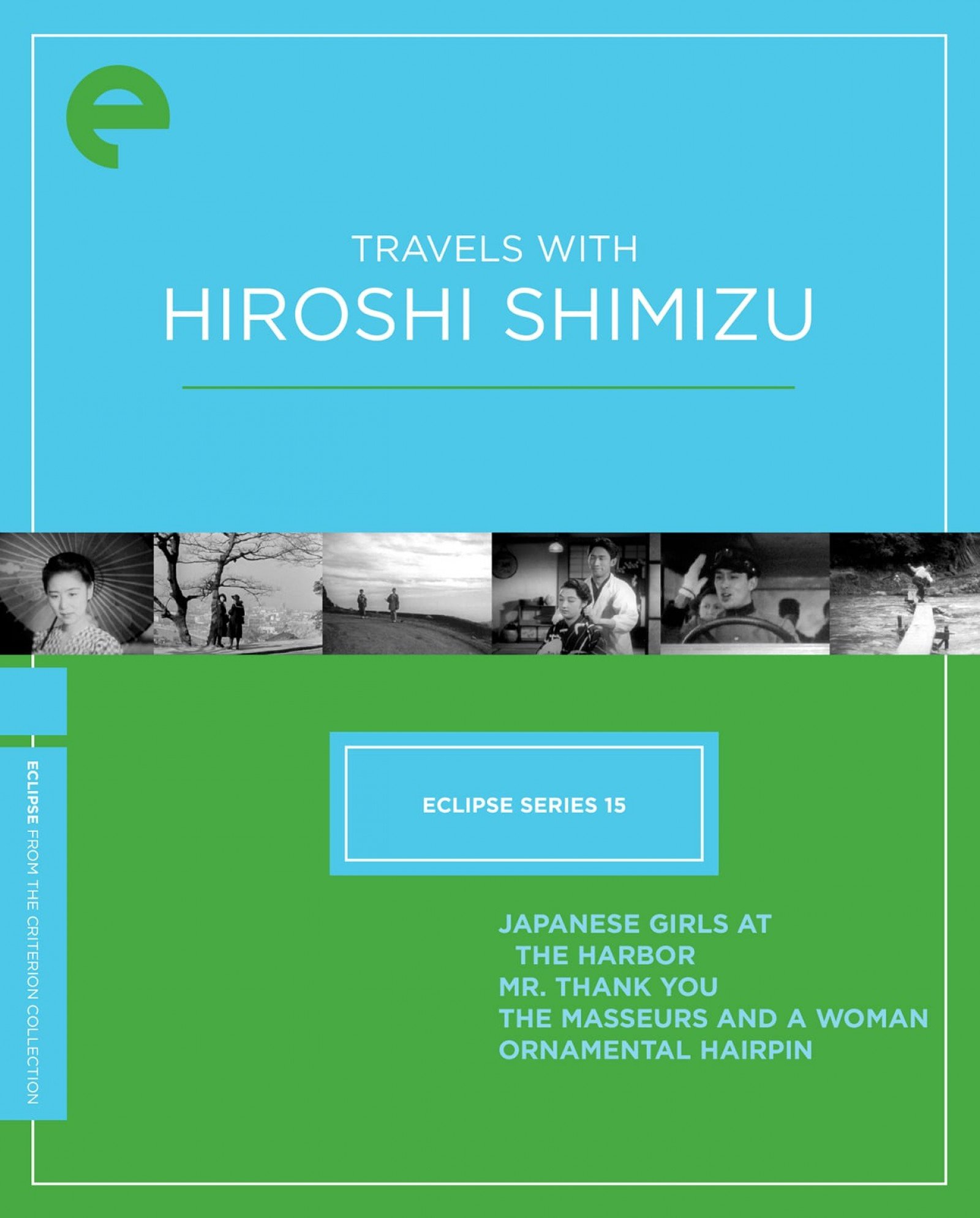 Despite having enjoyed popularity during his lifetime, the works of Hiroshi Shimizu were by and large forgotten until a 1988 London retrospective—22 years after the filmmaker’s death—began to cast the long, canonized shadows of Kurosawa and Ozu off this equally essential artist. Even now, his works remain almost completely overlooked. The liner notes for this Eclipse set—which includes Japanese Girls at the Harbor, Mr. Thank You, The Masseurs and a Woman, and Ornamental Hairpin—note that Shimizu was known for churning out 10 or more features a year, with more than 150 to his name by the end of his decades-long career. Even the usually encyclopedic IMDb only lists a few dozen of his titles (though much of his output is presumably lost), while Mr. Thank You, with a whopping 85 votes, stands out as the most seen film of the lot.

In hindsight, this tendency to overlook Shimizu is fittingly ironic given the director’s humanitarian preoccupation with the lost and forgotten. The four films presented here are all concerned with the integrity of the human condition, with a not insubstantial bias toward the wandering spirit. Typically short in length (60 to 80 minutes) and concerning no more than a few characters over the course of a relatively short period of time, Shimizu’s films can be described as introverted epics: microcosmic pools of the world at large in which every exchanged gesture and word speak volumes to universal virtues and the meaning of life. Generally lacking a definite narrative structure, these films are more comfortable with the ever-fluctuating tides of the world, as the unfolding interactions and their subsequent implications move about with their own sensual ebb and flow. (Shimizu’s handling of his relatively larger casts foreshadows Robert Altman’s more blatantly epic experiments in social causality.)

Although more than technically apt, Shimizu’s greatest strength was his intimate attention to the landscapes of the human form, though it was his remarkable ability to seamlessly merge these qualities that gives his work an archetypal, quotidian brilliance. Perhaps due to its silent format, 1933’s Japanese Girls at the Harbor could be argued as the most visually remarkable of the four; every composition effortlessly draws out the characters inner turmoil in relation to the world at large, while his dramatic use of deep focus speaks to the film’s concern with perspective, both emotional and physical. Shimizu’s efficiency was already in excellent form; not a shot, including title cards, goes to waste in the story of two friends forced onto divergent paths after a violent act of passion forces one to flee, ultimately taking up a life of geishadom. The ever-present reality of change is first suggested via an opening scene of ships departing the girls’ harbor town, while Shimizu’s trademark tracking shots—here in their infancy—suggest the fragile nature of choice (and morality) in a chaotic, sometimes immoral world.

Mr. Thank You, from 1936, finds Shimizu’s tracking shots at their most natural and poetic, used to portray the front and rearview perspectives of a commercial bus as it passes pedestrians and hikers on a mountainous pass in rural Japan (the otherwise unnamed driver enthusiastically thanks those who move out of his way). Relegated almost exclusively to the confines of the narrow, rickety vehicle, the cross-section of passengers speaks to the concerns of Depression-era Japanese culture, while the tender handling of these political undercurrents allows their various, intersecting life stories to achieve a more universal status (the pangs of unemployment, for example, smack as if they were present tense). This may be Shimizu’s greatest achievement in rendering the individual universal and the personal political. Mr. Thank You feels so lived-in and genuinely off-the-cuff that it’s of little surprise to learn that the film, while based on an acclaimed short story, was shot on the limb sans script.

The final two films, The Masseurs and a Woman and Ornamental Hairpin, represent Shimizu’s most unorthodox and meandering filmmaking. Both of these spiritual cousins take place at a remote inn where, what with guests present from all walks of life, a wide array of unlikely paths have crossed, weaving tangled webs ripe for the plucking. Tug at any one string and the cohesive, unifying bonds of hope and desire become achingly tangible. These ensemble pieces don’t lack for humor, but neither, despite their apparent levity, can be accurately described as light; unresolved romances and tender desires lie just beneath the surface of even the jolliest of proceedings, like wounds rubbed raw time and again before being allowed to heal. Most poignant, to these eyes, are the tearful pontifications at the conclusion of Ornamental Hairpin: Having fled the wealth of her former life, Emi (Kinuyo Tanaka) renounces privilege in favor of life-affirming struggle. Through uncertainty and hardships, life finds meaning; this, above all, lies at the core of Shimizu’s ravishing common-man cinema.

Even within individual films, the quality of these prints ranges noticeably, particularly around the reel changes. That being said, the overall quality is pleasantly average, and even the occasional concentration of scratches and dirt fails to disrupt the viewing experience. Sound is equally proficient; pops and hisses aplenty, but every line of dialogue rings clear and the sweet musical accompaniment loses nothing in translation.

As usual for these Eclipse sets, the movies come sans special features. However, a series of essays by Michael Koresky, located inside each film’s respective casing, are a must-read.

Review: Wim Wenders’s Until the End of the World on Criterion Blu-ray