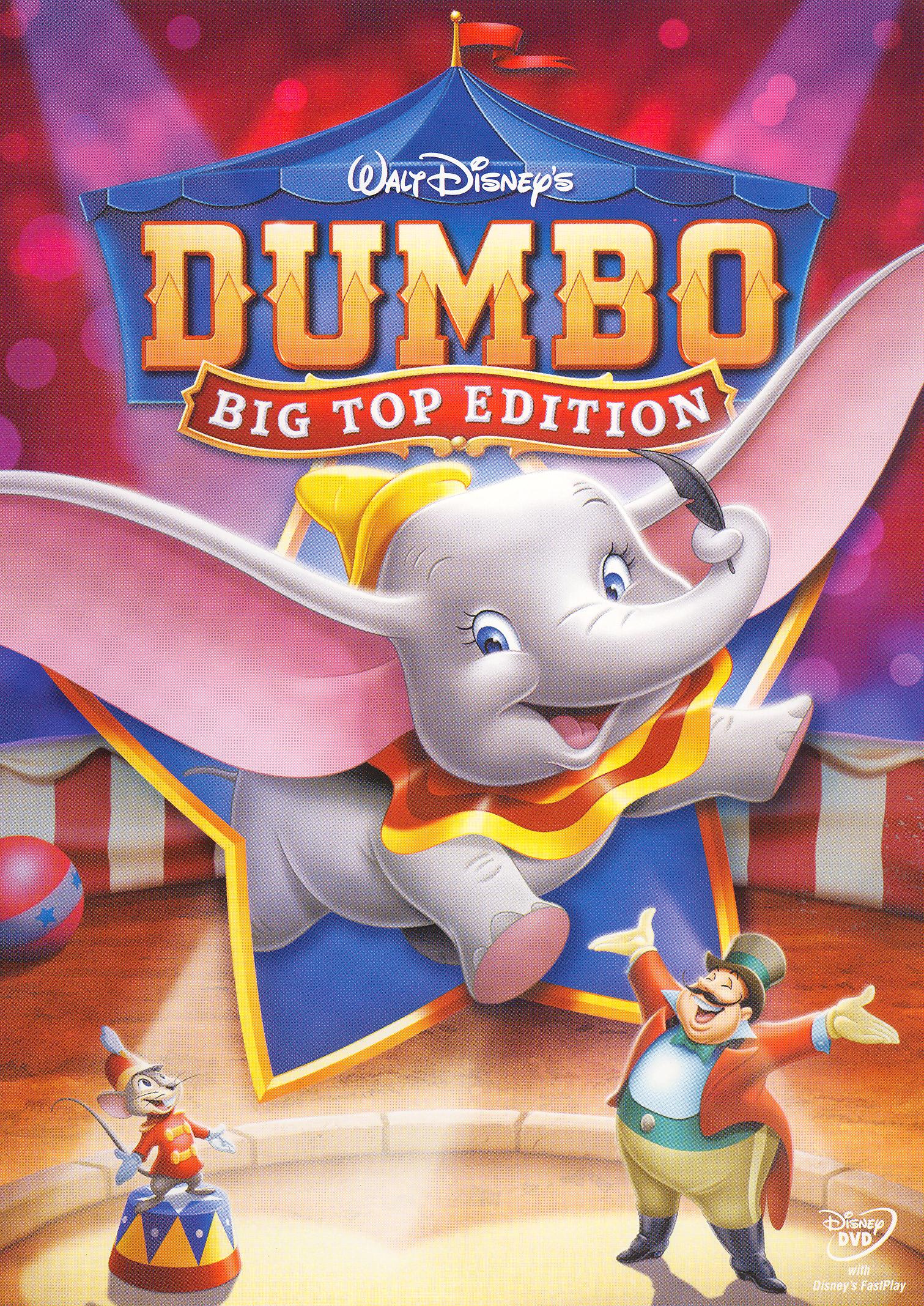 A personal confession: I rarely cry at either funerals or weddings and have been known to laugh at dead-baby jokes. The string of Disney reviews I’ve written for this website have only confirmed my standing as, according to one of my editors’ reactions to my take on Bambi, “a heartless cunt.” But, in its scant 64-minute running time, the big-top melodrama of Dumbo reduces me to a blubbering, mucus-drizzling wreck at least once with every viewing. Call it an acute narcissism of the martyr kind, but the social exclusion of young Jumbo Jr. hits a very specific nerve. And if I’ve already indicated that I insist on reading each Disney parable as a uniquely American rite of passage that ends up forming (or malnourishing) the psychosexuality of every child, then Dumbo represents the singular case in which I’m relieved Uncle Walt was allowed to act as a preschool Dr. Ruth. In short, there’s a reason that when Dumbo, in the film’s most vivid sequence, mistakenly drinks water from a spiked trough, he sees an eye-popping, boundary-smashing new world in which pink elephants with loosely billowing, phallic trunks go on parade.

From the very first scene, Dumbo radiates a genuine warmth and concern for pariahs, and puts it into a nuclear-family context. Sure, the image of a stork delivering swaddled bundles of joy strapped to parachutes isn’t, on the surface, any less ridiculous than Bambi’s off-screen “twitterpat,” but it soon becomes clear that the Disney animation team—taking something of a breather with this film after the monumental, somewhat mixed undertaking of Fantasia—aren’t just nursery rhyming. The birds and the bees might be getting the sugar-glaze treatment, but, unlike Mrs. Jumbo, they’re all rewarded with children in the bargain. Mrs. Jumbo, a notably single would-be mother, looks to an empty sky while every animal pair around her snuggles in their instant families. For one miserable evening, it seems all she has left to look forward to is a life spent pitching circus tents with a gossipy chorus of old-maid elephants. When the stork returns the next day to correct his delivery error and Mrs. Jumbo lovingly unwraps her delivery, her baby’s massive ears have everyone else fanning themselves as though he were the unexpected product of a secret interracial affair.

According to the P.O.V. shot from the stork’s cloud, Dumbo takes place in and around Florida (clearly labeled as though the letters actually appeared on the land below, with the skyscrapers of New York looming tantalizingly on the globe’s horizon above). And though a flock of stereotyped black crows show up at the film’s climax to shuck and jive and goad Dumbo into believing he can fly, Dumbo’s true metaphorical colors resonate stronger when you consider the social implications of its mute, not-asking-and-not-telling protagonist’s treatment at the cruel whims of everyone around him. And until he makes his dazzling personal discovery public (i.e. until he comes out), Dumbo marches from one hate crime to the next. The matronly elephant pack makes speculative insinuations by spelling them out under their breath as though burning up Peyton Place’s party lines (hint: e-a-r-s spells “homo”). Buck-toothed backwoods boys, barely human, flock around the naïvely trusting elephant and laugh, using their open coats to imitate his ears like they would throw their limp wrist in mock effeminacy. When Mrs. Jumbo, a two-ton Greek tragedy, reacts to her son’s denigration, it shakes the rafters of the big tent so decisively that the powers that be have no choice but to lock her away and deny the two any reasonable belief in their own capacity for acceptance as a nuclear family. Like mother, like son. The moment Dumbo gets his big showbiz break in the Circus, waving his little pride flag, he also ends up throwing the entire microcosmic society into total upheaval, actually causing the entire tent to collapse. Apparently, you allow elephants with big ears into the definition of an elephant act and society will crumble. Where have I heard that argument before?

Dumbo visiting his shackled mother at his lowest point so that he can sob into her caressing trunk, the only body part she has that can reach outside the prison car’s bars, while she comforts him to the strains of “Baby Mine” is maybe the most emotionally cathartic moment in any kids’ film, Disney or otherwise. But it also provides Dumbo with the until-then deferred familial support necessary for him to achieve his actualization as a pink elephant. Which, forget metaphor, happens exactly as it would in real life: a night of drinking, a garish musical number in a tastefully-lit fantasy world, and a dazed hangover in which you discover, while dangling from a tree, just how much of a freak you actually are.

The modern-day promotional material for Dumbo trumpets: “The perfect film for every family!” I’ll drink whatever the clown brigade’s pouring in support of that endorsement. Dumbo remains the one Disney film that doesn’t reduce life’s lessons down to Kindergarten Cop’s infantile mantra of “Boys have a penis, girls have a vagina” and expect the heteronormative indoctrination to take root in impressionable minds dazzled by big-screen paint-by-numbers. I know right now you’re probably singing along with the crows: “I thought I’d seen most everything, ‘til I seen a critic call a cartoon toddler elephant gay.” But, as far as my empathetic tears as an adult viewer are concerned, it’s the perfect Disney film for every definition of family.

Dumbo was previously released five years ago in a workmanlike rush job, before “Masterpiece” editions became de rigeur at the Mouse House. I didn’t buy that edition before it went on moratorium, but all reports indicate that this transfer is a marked improvement. Even if that’s not the case, I’m satisfied with what we’ve got. Colors are bright without being overbearing. There appears to be no evidence of too much digital cleanup, as I noticed some flaws in the print. (Which, as far as I’m concerned, is preferable to some of their other discs’ over-scrubbed perfection.) The 5.1 remix sticks to a winning formula, keeping most everything basically mono but spicing it up with a few directional effects for action sequences and musical numbers.

Considering it’s called the “Big Top Edition,” I’m sort of surprised there isn’t a three-ring circus here. In fact, this single-disc edition barely qualifies as a one-ring circus. There’s an informative commentary track from Disney’s resident animation historian (or one of them, anyway) John Canemaker and vintage animated shorts that will bore kids but entertain adults. There are the expected interactive CGI games and corny new music video covers of songs from the film that will reverse that diad. There’s a paltry 15-minute featurette in which any number of talking heads claim that Dumbo is “the best,” “my favorite,” “sadly underrated,” but don’t actually go into detail about the making of the film or its origins. Still underrated, I guess. Sure, most of what they excised from comparable “Masterpiece” editions wasn’t much more than glorified corporate cheerleading, but I’d expect a little more for a film that Walt Disney himself, in a short clip included here from one of his Disneyland introductions, claimed was his personal favorite.

Pink elephants are on parade in Dumbo, Walt Disney’s most sanguine film by an ear. Too bad Disney’s single-disc package treats him like the Cheneys do Mary.