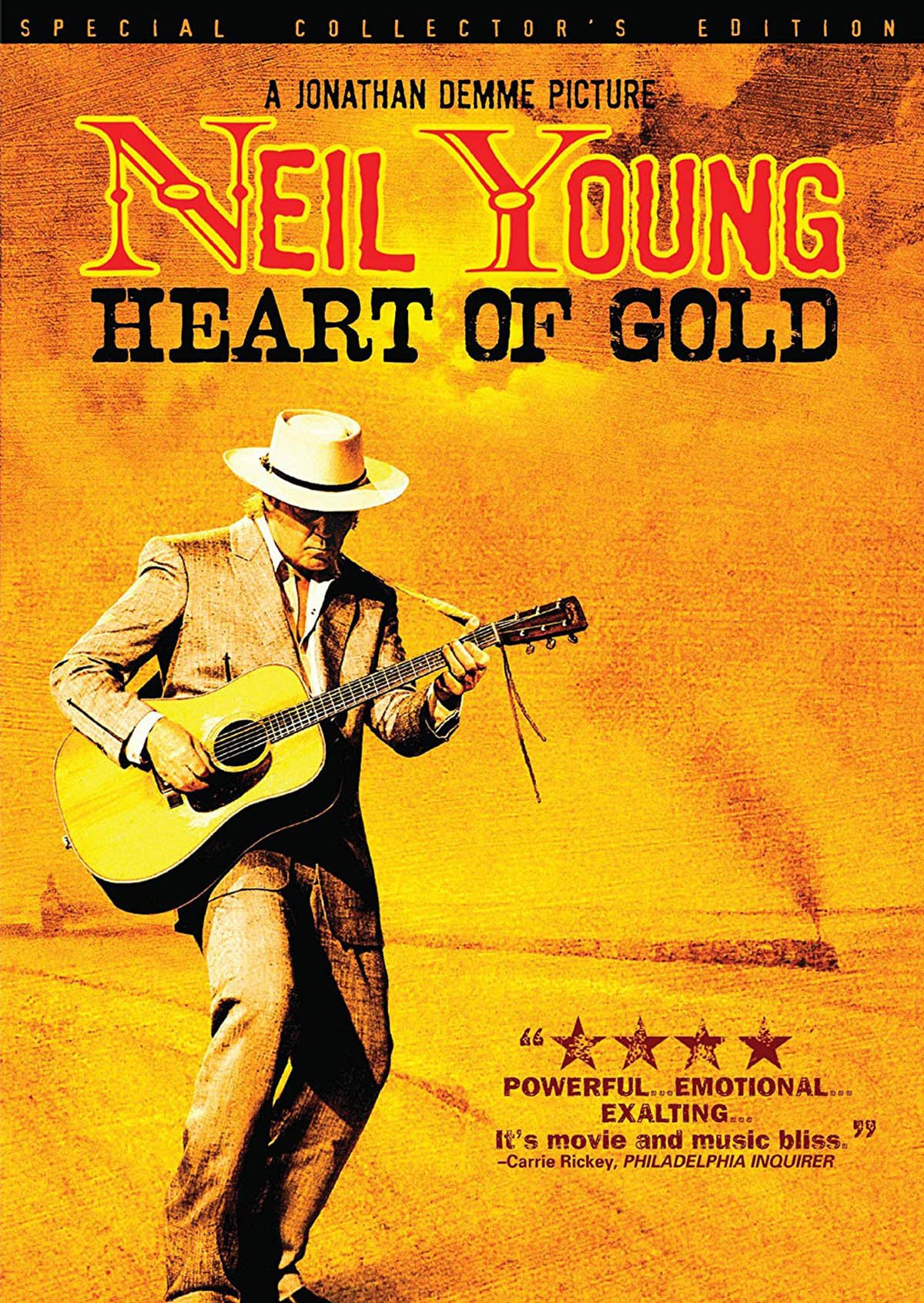 “If you follow every dream, you might get lost,” sings Neil Young during the opening number of director Jonathan Demme’s sensational concert film Neil Young: Heart of Gold. It’s a fitting mantra for any artist, emphasizing the spiritual pull of one’s métier—giving yourself over, as Young states in the film’s prologue, “to the muse”—even as it acknowledges our very mortal necessity for focus and choice. Demme understands this genre intimately; he recognizes that the concert film requires more than just haphazardly pointing the camera at the musicians. (There is a tendency, I think, for filmmakers to underestimate the cinematic possibilities when faced with a literal proscenium.) It is perhaps easy to forget that movies grew out of theatrical tradition and that each generation’s artists of note used that anxiety of influence to think outside of the proverbial box: what is the cinema screen, after all, if not a two-dimensional stage given even more strongly to the art of illusion? I’d posit that it was The Great Train Robbery’s fourth-wall breaking final gunshot (an all-too-intimate, physically assaultive descendent to the Lumière Brothers’s Arrival of the Train at La Ciotat) that pointed the way for pioneers of theater/film interplay like Griffith, Renoir, Sirk, Godard, Fassbinder, Altman, and Demme. I suppose there’s a danger in listing these names together: in its conflationary bias it risks accusations of elitism and exclusion, and in doing it I am probably ignoring the very insights of the statement that opens this review. But what is life to an artist of any stripe without risk? It was certainly out of such chance taking and choice-making that Heart of Gold came to fruition.

Heart of Gold was filmed over two consecutive nights at Nashville’s Ryman Auditorium, ostensibly as a showcase for Young’s most recent album Prairie Wind, which was written and recorded in the weeks before the singer had an operation on a potentially fatal brain aneurysm. The mood, however, is less one of synergy than of symmetry. Indeed, the film is constructed in such a way that it gracefully spirals and dovetails between emotional extremes, a profoundly bottomless camaraderie giving way to a deeply entrenched solitude and back again. The film is something of an amalgam of Demme’s two prior musical performance pieces Stop Making Sense and Storefront Hitchcock, resetting the former’s expansive, multiracial interactions to a Southern milieu and engaging, in Young, an equally eccentric personality (captivating as David Byrne, digressive as Robyn Hitchcock) to serve as ringleader.

The opening is reminiscent of Demme’s journey-to-the-theater montage from his Spalding Gray monologue film Swimming to Cambodia. Unlike the rest of Heart of Gold, this prologue is shot on video. It introduces each of the musicians and allows them a pithy observation or two (the most provocative moment comes when one singer earnestly wonders if there are cultural policeman guarding the sanctity of the arts), but note how these short snippets gain profundity through Demme’s compositional and editorial choices. Not one of the alternating medium shots is from exactly the same angle. The cumulative effect, when cut together, is that of a connective circle of experience, one that foreshadows and approximates the musicians’ onstage actions and interactions. The August blue full moon that Demme captures in the sky above the Ryman acts as a benedictive symbol of Young’s humanist theater-in-the-round. The night and the event, in other words, are blessed, and when the video prologue transitions to the crisp aural/visual clarity of 35mm it’s hard not to feel like one bearing witness to the miraculous.

Inside the Ryman the curtains part and, as Young sings the opening bars of the Prairie Wind lead-off “The Painter,” Demme and cinematographer Ellen Kuras’s camera moves forward in a sublimely tentative unbroken take. It takes several stanzas before we join Young and his band onstage, and as in both of his preceding concert films Demme prefers to suggest the theater audience’s presence rather than show them directly. For the next few numbers Demme and editor Andy Keir cut on graphic eyeline matches, emphasizing the musicians’ intimate connections with their instruments and with each other. The sense of solidarity builds so quickly (even the prop man who washes Young’s harmonica gets a lingering close-up) that it feels as if the movie will peak before midpoint. Then the tone changes drastically and I have to admit that I was unprepared for the places Demme and Young decided to go. I started to feel distinctly uncomfortable when Young and Emmylou Harris (whose stone-cold Dietrich demeanor unbalances Heart of Gold in very interesting and, I think, very intentional ways) duetted on the Hank Williams shout-out “This Old Guitar.” And by the time Demme’s camera gazed directly at Young for the near-entirety of the Prairie Wind closer “When God Made Me,” I wondered if the film had been thrown off its rails by unforeseen, damagingly narcissistic obstructions.

All part of the point as it turns out. Pay particular attention while watching Heart of Gold to the stage backdrops, which in the first half of the concert suggest burnished, wide-open spaces and in the second half (where Young and his bandmates sing standards from his classic albums Harvest and Harvest Moon) resemble the interior of a cathedral perhaps not so coincidentally mirroring the Ryman balcony’s stained glass adornments. This is the key to Heart of Gold’s thematic journey: Like Demme’s Manchurian Candidate remake, which detailed one character’s search for identity in a world that would quash it without a second thought, the film moves from a very mortal exterior to a very soulful interior, and by the time the final curtain call hits, the voyage is reflected in its every challenging intricacy, back at the audience. The Train Robbery gun goes off, the La Ciotat train runs us down, and then Demme and Young take us beyond this death-defying shock to the system in the final credits sequence. I can only describe the last single-take performance that accompanies the cast and crew roll call as a vision of heaven, though one that atypically finds peace and transcendence in an echo-heavy empty house. It suggests that, despite it all, we needn’t be afraid of the end of things; having sheathed our creative tools (whether or not for the last) it is perhaps better to trust in William Rose Benet’s observation, “And now there is merely silence, silence, silence, saying all we did not know.”

Paramount Home Entertainment presents Neil Young: Heart of Gold in a wonderful 1.85:1 anamorphic transfer on the first of this set’s two discs. In its DVD incarnation the film exhibits a heavy amount of grain, especially in darker areas of the picture. I believe this is a knowing product of the source footage: in my initial review I mistakenly identified the concert sequences as originating on 35mm when they in fact were photographed on Super 16mm and then blown up to 35mm. Minor specks pop up now and again, but you’d have to be looking for them and-depending on your home theater setup-they will most likely not be noticeable. The two English 5.1 soundtracks (both Dolby Digital and DTS) are rich and resonant, as is the English 2.0 surround track, which sounds just as full, though inevitably a bit flatter in depth and separation. Both the feature and the special features offer optional English subtitles and closed-captioning for the hearing impaired.

The first disc contains a bonus song (“He Was The King”) not included in the theatrical cut of the film. There are also a series of trailers for Paramount products that include Martin Scorsese’s Bob Dylan: No Direction Home and an upcoming special edition of Warren Beatty’s Reds. The second disc houses the rest of the special features: six mini-documentaries (listed in sidebar) explore the genesis and creation of Neil Young: Heart of Gold, while a series of “Rehearsal Diaries,” narrated by director Jonathan Demme, take us behind-the-scenes as Young, Demme, and their respective crews prepare for the concert’s filming. Also included is a brief performance by a fresh-faced Young on a 1971 episode of the Johnny Cash Show.

A tell-tale Heart worth having.

Review: Russ Meyer’s Beyond the Valley of the Dolls on Fox DVD