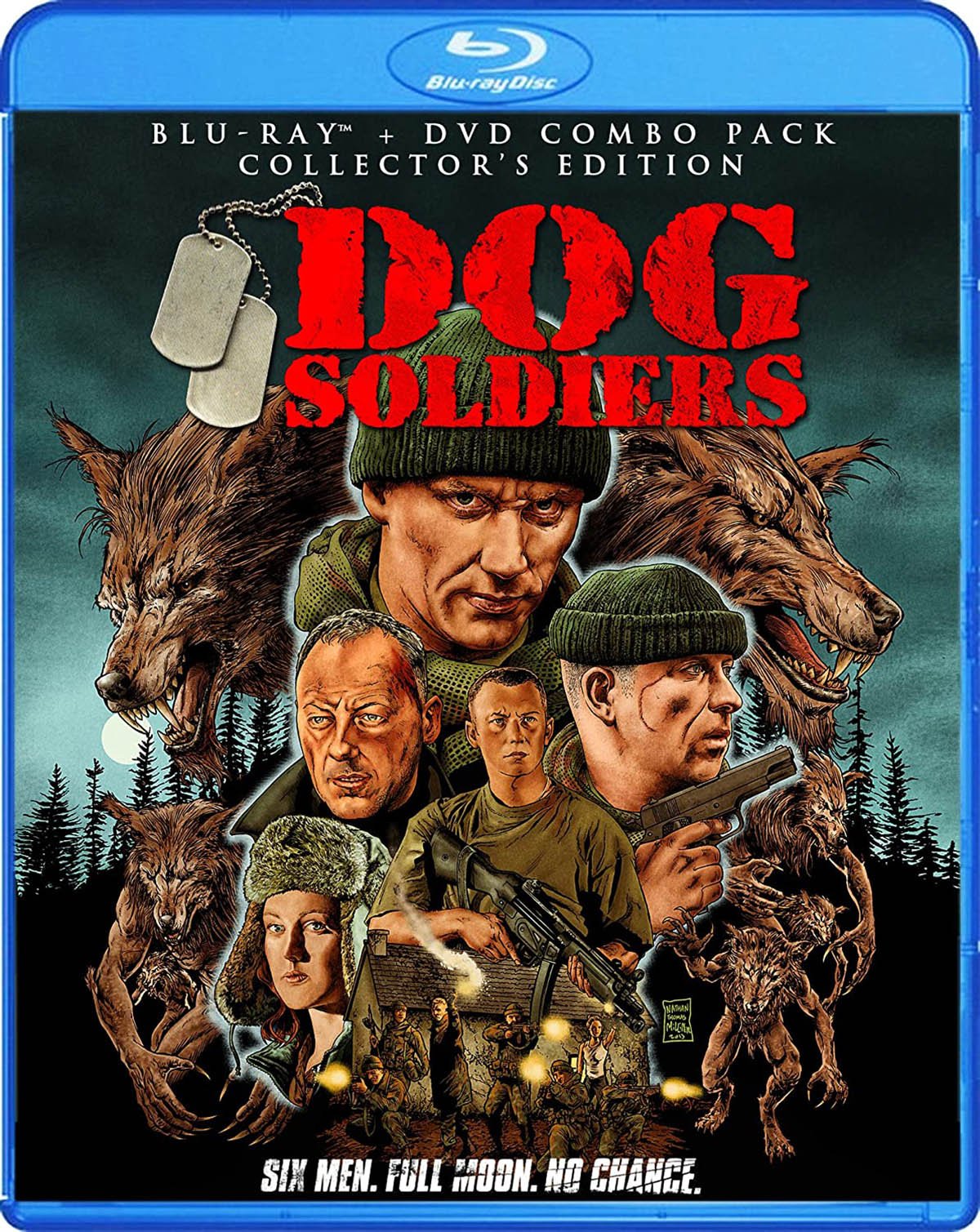 Neil Marshall’s Dog Soldiers is probably best enjoyed by horror-minded cinephiles interested in the context of the creation of B-movie illusions under challenging circumstances, as it inventively squeezes solid werewolf-movie production value out of a sparse budget. These particulars offer intellectualized intrigue to a rarefied audience that can appreciate how, say, the quick, nearly subliminal cuts of marauding lycanthropes help to obscure the obvious animal suits. Marshall’s staging consciously suggests a cruder approximation of James Cameron’s methods of evoking a huge alien horde with reportedly just six full outfits in Aliens. Dog Soldiers is heavily indebted to Cameron’s film narratively as well, lifting huge swathes of its set pieces wholesale. And the woodsy setting of the film’s first act recalls the terrifying landscapes of An American Werewolf in London and even Southern Comfort—the similarity to the latter compounded by the specifics of the plot, which involve a military training exercise gone loco.

The film encourages audiences to produce these sorts of tangled pop-cultural associations as one watches it. As he says in the audio commentary included with this disc, Marshall loads Dog Soldiers up with Easter eggs, which invite a game of hunting and gathering that occasionally distracts from the dullness of the film itself. Casual movie fans seeking merely a diverting midnight movie, rather than a running name-check of Marshall’s favorite films, however, might find themselves checking their watches over the course of the running time with increasing frequency. Especially when the story moves the characters from the compelling vistas of the Scottish Highlands into a cramped farmhouse, priming the aesthetic well for werewolf encounters that all follow essentially the same playbook.

The routine goes something like this: The British Army soldiers (who’re difficult to tell apart, despite the good actors playing them, partially because they’re assigned roughly one obligatory character tic a piece), under siege in the farmhouse, take turns uttering panicked profanities, making sport of their aggression, until a werewolf springs out of a corner or through a glass window to seize and annihilate them. Rinse and repeat roughly five times, the end. Along the way, there are a few twists that add nothing to the film, not even the gift of variation, while a significant amount of time is spent developing a rivalry between a soldier of conscience and an amoral military man that so pointedly goes nowhere as to cause one to wonder if an intended joke is somehow misfiring. If Marshall can be said to accomplish one thing with Dog Soldiers, it’s this: You feel the tedium of a long night spent hiding out somewhere. The viewer is as likely as the film’s characters to come down with a case of cabin fever.

There are debut films that have been made as the result of long, festering passion, as well as those that are clearly intended as calling cards to prove their makers’ technical prowess for the sake of getting them hired by producers for future work. Dog Soldiers belongs to the latter tradition, and it’s marred by a focus on impersonal proficiency at the expense of anything deeper or more lasting. Marshall’s subsequent film, The Descent, exhibits an aesthetic elegance that appears to be a fluke within the director’s career, though Marshall has a talent for jumpy, jagged visuals that imbue the rough-and-tumble worlds of his shopworn ideas with unexpected verisimilitude. Dog Soldiers boasts a gritty, earthy sheen that contrasts effectively against the supernatural qualities of his creatures, which are memorably long, sleek, and vertically shaped in a manner reminiscent, once again, of the Alien.

Marshall has little interest in werewolves though: They’re just an “other”—something for the soldiers to kill and be killed by that requires less of a budget to realize than H.R. Giger’s most famous creation. Marshall isn’t as crass as Cameron, who didn’t question his stereotypes, barely appearing to regard them as such, but he’s also nowhere near the latter’s league in terms of establishing locational logistics for set pieces, which is why Dog Soldiers feels so rote and devoid of consequence, while Aliens is among the most visceral of American movies. Retrospectively, Dog Soldiers scans as a forgettable, uneven, sporadically involving rough draft for a better movie, which is to say that it will be savored primarily by a particular sort of worshipful, slightly masochistic completest.

The image is awfully grainy initially, but that may say more about the source materials than the transfer. Most of the image is more conventionally grain-modulated, and the blacks are well-differentiated, though many of the other colors are earthy/muddy blurs of movement, but, again, it’s difficult to sort the flaws of the transfer from the flaws of a film that, best case, is sort of an eyesore. Sets and skin textures are detailed, as are the outfits worn by the actors (including the wolf costumes). The various soundtracks are appropriately bombastic, sometimes drowning out the dialogue (you aren’t missing anything in that department anyway), but attention is precisely paid to the subtle supporting effects as well, from the shattering of windows to the giving of floorboards. Every snap, crack, splatter, and splinter is allowed to matter.

Neil Marshall’s audio commentary riffs on the making Dog Soldiers, from signing a production deal on a cocktail napkin to nearly netting Jason Statham and Jason Isaacs for key roles, though the director has a tendency to drift into silence. This information is more compellingly delivered in “The Making of Dog Soldiers,” a terrific 60-minute documentary that features new interviews with Marshall and a great variety of his collaborators, offering a detailed portrait of the production of the film’s set, the forging of the business deals necessary for landing funding, and the many influences that inspired the film, among many other anecdotes. All of the participants are charismatic, their enthusiasm infectious and instructive, particularly for aspiring filmmakers watching at home. Photo galleries, the theatrical trailer, and one of Marshall’s early short films round out this engaging supplements package.

Danny Boyle’s Trainspotting at 25: Addiction As Symptom of a Nation’s Limbo State

Review: Valerie and Her Week of Wonders on Criterion Blu-ray