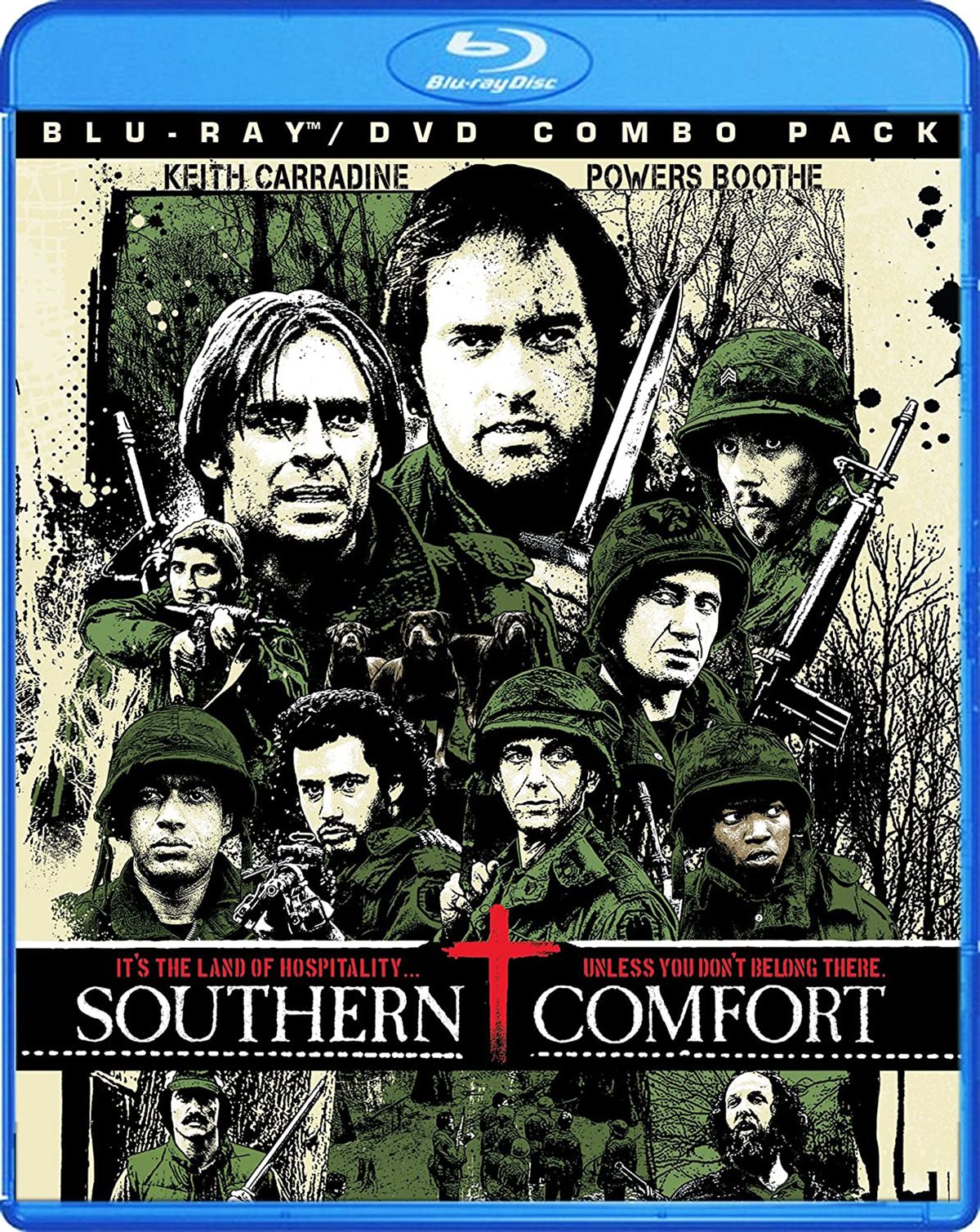 Walter Hill’s Southern Comfort is a thriller that twists one up in knots, whipping the audience up to a point where they may wish that its maker would just spring the damn gore already so as to relieve the tension he masterfully coils. That’s the empathetic point. The Louisiana National Guards who populate the film succumb to panicked, tormented irresolution, as they’re lost in the Bayou swamps for so long that they begin to crack up and go about intentionally sowing the seeds of their demise. Death is at least a conclusion to their wandering and, more pointedly, a relief from the ripening feelings of impotency and terror that spring from their humbling at the hands of the Cajuns who call the swamp home.

Granted, the National Guards are only in the swamps for something like a day and a half, but this film is an allegory, most obviously for the Vietnam War (the year is 1973) and the racist and classist specters of the American South, but also for a state of mind that’s distorted by tragedy so greatly that every element of life comes to be informed with portent. One of the greatest of all American action directors, Hill has a peculiar sensibility that appears to originate from a love of macho boilerplate that’s unexpectedly spiked with common humanist sense. A prevailing director of westerns, even if they’re westerns in disguise in the tradition of this film or his almost equally incredible Trespass, Hill feeds on the iconography of male aggression, particularly the pull between the genre-movie archetypes, such as the big swinging dick who’s destined for a comedown, or the quiet pacifist who becomes the voice of conscience. But Hill doesn’t ever entirely commit to these clichés: He coaxes his audience’s guard down with them, allowing viewers to assume they’re watching just another rousing war movie, only to conjure the chaos that macho braggadocio egotistically, and fearfully, attempts to deny.

The first act is cloaked in disconcerting dread. Hill, who clearly emulates the old-school “man’s man” craftsmanship of directors like Howard Hawks and John Ford, doesn’t wear his work heavily in the tradition of many contemporary American directors. The swamp setting appears to be swallowing the Guards alive before they’re even in danger. The green of the moss, which hangs everywhere, is seemingly conscious and malevolent, rather than encouragingly fertile, and this aliveness contrasts with the stagnant water that’s always at least at the level of the soldiers’ ankles, as well as the trees, many of which are as green as the moss, but others of which are dead and somehow dried out despite the preponderance of water. In the face of this primordial realm, the soldiers’ initial strutting is rendered immediately pitiful in a manner that refreshingly evades the kind of armchair-pacifist criticism that might ironically cheapen the soldiers’ ordeal with stock outrage. You don’t feel smug superiority toward these men because you fear the trap they are clearly setting for themselves.

Southern Comfort is the kind of film that you remember as being more violent than it actually is. As in The Texas Chainsaw Massacre, you have the feeling in this film of social breakdown, of an erosion of conventionally orienting perspectives. Hill has steadfastly denied that he explicitly intended a Vietnam allegory, but that scans as willed stubbornness in the context of the 1970s setting and the implicit jungle imagery and the terrified, out-armed soldiers (in a macabre metaphorical touch, they’re mostly firing blanks) who’re forced to engage in a battle they don’t understand on turf that’s entirely and disastrously alien, and who’re subsequently destroyed by a theoretically disadvantaged native enemy. The violence arrives in quick, poetic bursts, but that poetry is morally contextualized by Hill’s command of pace and of flow, and by his heightening of the terrifying emptiness that precedes the carnage, particularly in the movement of the soldiers, whether they’re walking or floating down the river. (In one telling moment, Hill superimposes shots of an expository conversation overtop images of marching, so as to avoid the awkward herky-jerky stop-and-start rhythm of more conventional thrillers.)

There’s no good-guy/bad-guy dichotomy to anchor the film in comfortably familiar associations. The Guards are in the wrong place at the wrong time, and an asshole’s tasteless gesture sets off a war, but even the most entitled of wingnuts would have to concede that the soldiers’ initial actions could be easily taken as threats of murderous invasion from the Cajuns’ point of view. The heroic party lines spectacularly blur at the climax, which juxtaposes the intimate, claustrophobic camaraderie of a Cajun party with the partygoers’ matter-of-fact hunt of the remaining living soldiers (played by Keith Carradine and Powers Boothe with poignant authority), which is finally cut short when the American military swoops in to scoop up their survivors. Shooting the armored cars and helicopter in frightening slow motion, close up, eventually freeze-framing on the vehicles’ white “USA” paint, Hill doesn’t leave you with closure or resolution, but with a deus ex machina that’s existentially unmooring in its arbitrariness. The soldiers will live, but notions of living peacefully or “normally” have been exposed as perverse jokes. They’ve lost the luxury of the illusion of systemic unambiguity, revealing the film to be a gorgeous portrait of an origin of posttraumatic stress disorder.

Colors are positively lush, particularly the forest greens, which are pivotal to a film in which nature asserts itself as a primary character. Clarity is strong without exhibiting artificially polished signs of postproduction tinkering, and textural depth is vastly improved from prior home-video incarnations. The best surprise is the English 2.0 DTS-HD Master Audio monoaural track, which is lush and immersive for an aging, unfairly obscure film. This is a show-pony mix with some horsepower under the hood, when need be, as well as a subtle sense of delicacy that allows one to savor Ry Cooder’s terrific score. Occasionally the balance between the various diegetic effects appears to be a little off, as background sounds often trump the actors’ dialogue, but that’s almost certainly intentional and appropriate, given the story. War shouldn’t break for exposition.

A roughly 30-minute documentary features new interviews with Keith Carradine, Powers Boothe, Walter Hill, and others. It’s an engaging supplement, particularly for Carradine’s participation, but no one goes too far under the surface. Hill insists that the film isn’t a Vietnam allegory, despite acknowledging that audiences would read it as such, but he never really tells us why it isn’t. It’s easy to infer that Hill is the kind of director who thrills in the sense of a narrative’s surface texture and resents too much in the way of analysis. Or, more likely, that he wants to be regarded as someone who resents analysis, because there’s little possibility of the film’s resonances being accidental. Rounding out the package are the theatrical trailer and an image gallery.

Shout! Factory does right by Walter Hill’s ambiguous war allegory, one of the most viscerally terrifying of all American thrillers, with an appropriately lush and gorgeous transfer that will hopefully win the film new fans.