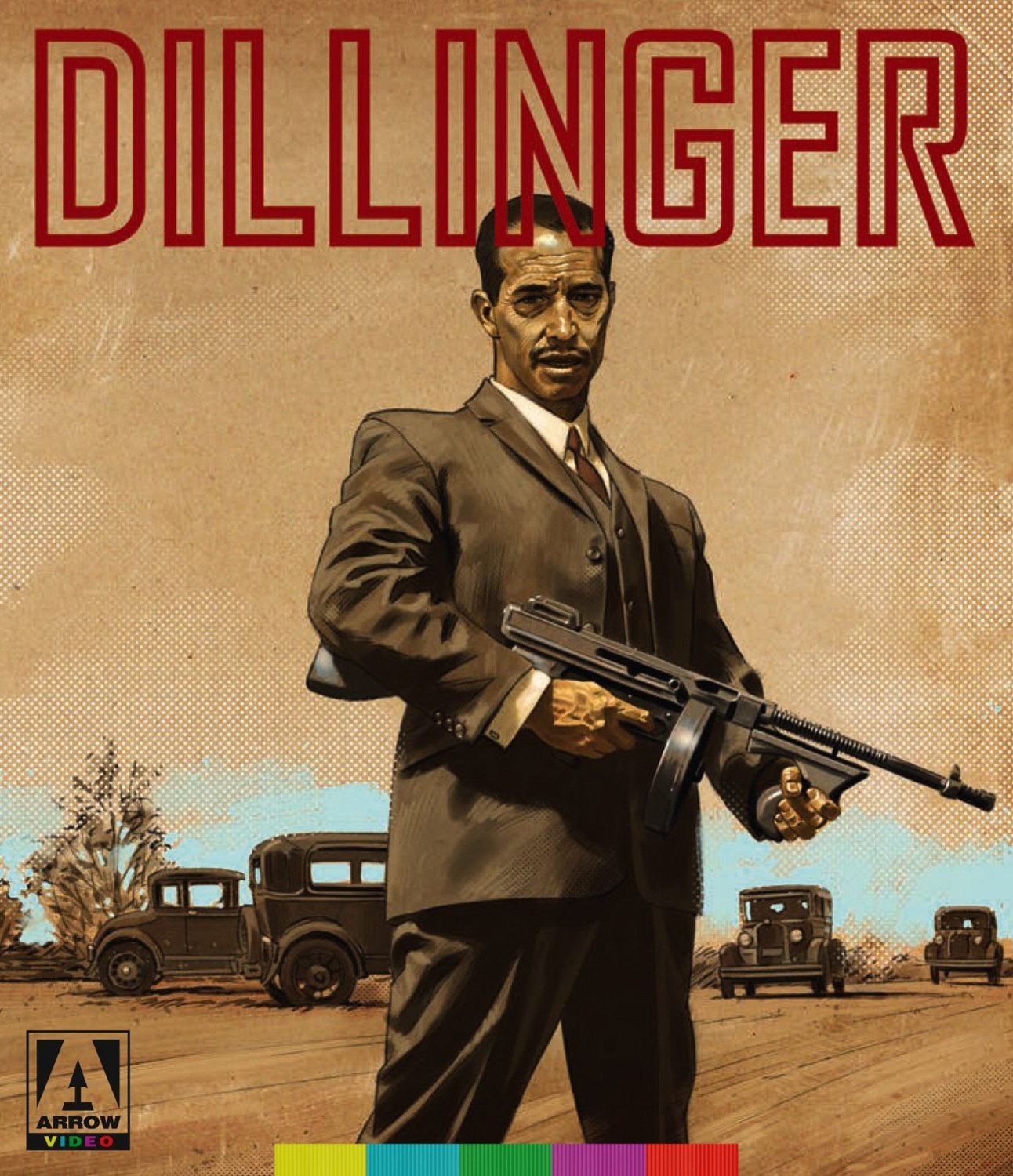 Director John Milius understands that we see a film called Dillinger for the gunfights and the chases across the beautifully recreated Depression-era landscapes, which are empty and littered with offices that no longer house businesses and machines that no longer operate. The film’s almost entirely comprised of action, with an occasional lurid stop-off at a hiding spot along the way, and titles telling us which state bank robber John Dillinger (Warren Oates) and his gang have scurried to at any given moment. The narrative’s timeline is short and curtly contained, spanning from 1933 to 1934, the year that Dillinger was gunned down outside of the Biograph by obsessive F.B.I. man Melvin Purvis (Ben Johnson). Little conventional characterization or context is ever provided, as we’re dropped right in the moments that truly matter for Milius, and it’s exhilarating to skip the superficial biographical details that usually provide this sort of genre film with a flimsy humanist sheen.

This is Milius’s way of approximating Dillinger and Purvis’s own self-glorifying bluntness. In place of exposition and Freudian explanation, the filmmaker offers sequences that abound in manly code of conduct and the violence it inevitably yields. Purvis, a right-hand of the unseen J. Edgar Hoover, is casually linked to Dillinger morally, as they’re both men more than willing to impose their wills on others with the weaponry that Milius never fails to fetishize. Purvis kills most of Dillinger’s men directly—a fiction that intensifies an impression of Purvis and Dillinger as symbolic American brothers embroiled in civil war, embodying the friction between a disenfranchised citizenry and a government that’s desperate to contain rebellion.

In a telling recurring joke, Purvis enacts a traditional ceremony before each gunfight. He layers a coat over his bullet-proof vest, pulling gloves over his hands with masochistic glee. A colleague then lights the Monte Cristo that’s clinched in his mouth while placing a tommy gun in Purvis’s hands, as he’s vowed to smoke a cigar over the corpse of every hood who killed one of his officers. Milius parodies this ridiculous ritualism, which likens Purvis to a knight as well as a robot, and simultaneously gets off on it. Purvis is a gross figure in this film, played by Johnson with a callousness that’s surprising for the actor, but he has stature because he adheres to Dillinger’s rules, which recognize the survival of the fittest. Purvis may have the country’s resources behind him, and he may enjoy the sort of privilege that earns him the resentment of the public that he’s ostensibly defending, but he’s willing to get his own hands dirty.

The gunfights are direct and un-fancy—understatedly sharp and brutal. Milius isn’t trying to emulate the carnage sonatas of Arthur Penn or Sam Peckinpah, as one might assume given the film’s general subject matter and time of release; there’s little slow-motion, and no elaborate camera pirouettes or fractured montage. The filmmaker prefers deep and open framing in the tradition of John Ford, occasionally punctuating this classicism with modernish handheld and telephoto camera work (most memorably in a scene that cribs from the terrific exterior pans used in the heist scenes of Gun Crazy). Milius’s shoot-outs are stripped down, succinct in their coverage, and unusually tactile, particularly the climactic battle at the Little Bohemia Lodge that sends Dillinger’s gang scrambling. Milius breaks the sequences down into shards, creating momentum in the editing, in the alternation between the pointing, shooting, and the squib-heavy reaction shots. In this context, violence is considered unceremoniously as labor, as the work of battle in which men like Dillinger and Purvis must engage, and thus it’s both grand and banal, lending it a dangerous, otherworldly yet crude charge.

The notion of criminal warfare as work is deepened by the casting of Oates (a dead-ringer for Dillinger), Johnson, and other legendary character actors like Harry Dean Stanton and Geoffrey Lewis. These are men who look like men, in that creased, wrinkled, dirty, oily, nearly primordial fashion that was once unquestioned as a normative standard of masculinity. The actors suggest both the grit and the inadvertent reward of thankless labor as well as the only-in-the-movies transcendence that comes from fearless exertion of will. Dillinger has no moral point, as it’s about the intoxication of unbridled machismo, and its trueness to itself is cleansing.

The image has a pleasingly gritty lushness. Like many Depression-era films, Dillinger is composed of varying dusty browns and grays, which are occasionally offset by the blue of the sky or, in this case, the jolting bright red of bloodshed and the glitz of city nightlife. The colors have an evocative fullness on this transfer, and the image itself has a newfound clarity, yet the film retains a rough-hewn texture that’s pivotal to its aesthetic. Facial contours are also well-detailed. The monaural soundtrack occasionally bungles dialogue audibility (though this might be accurate to the film), but it’s generally nuanced, which is particularly evident during the many dynamically mixed gunfights. One can hear what’s happening on different complementing planes, particularly on the multiple foregrounds and backgrounds that are at play in the siege finale.

The short interviews with cinematographer Jules Brenner, producer Lawrence Gordon, and composer Barry De Vorzon paint a collective portrait of the Dillinger production as an unusually assured and polished venture for the thrifty, exploitation-minded American International Pictures. Brenner discusses how he and director John Milius squeezed an amazing amount of production value out of a small budget, Gordon remembers Milius as a brilliant “character” capable of fashioning scripts that were distinctively pleasurable to read, and De Vorzon recalls how he had to adapt as a composer to get work, as he was initially trying to break into the business of writing songs for films. The audio commentary with Stephen Prince is dryly delivered, but offers a wealth of information on the film’s making, including the multitude of references that guide Milius’s sensibility, such as the photography of Dorothea Lange and the cinema of John Ford. The theatrical trailer, an isolated music and effects track, a stills gallery, and a booklet featuring essays by Kim Newman and John Astin round out this terrific package. All that’s conspicuously missing is Milius himself, who’s nowhere to be found on any of these supplements.

This rough, lurid, pointedly un-preachy work of macho outlaw cinema, one of the best of the many John Dillinger movies, deserves to be better known. Arrow Video steps up to the challenge with a beautiful Blu-ray that’s graced with helpfully contextualizing supplements.