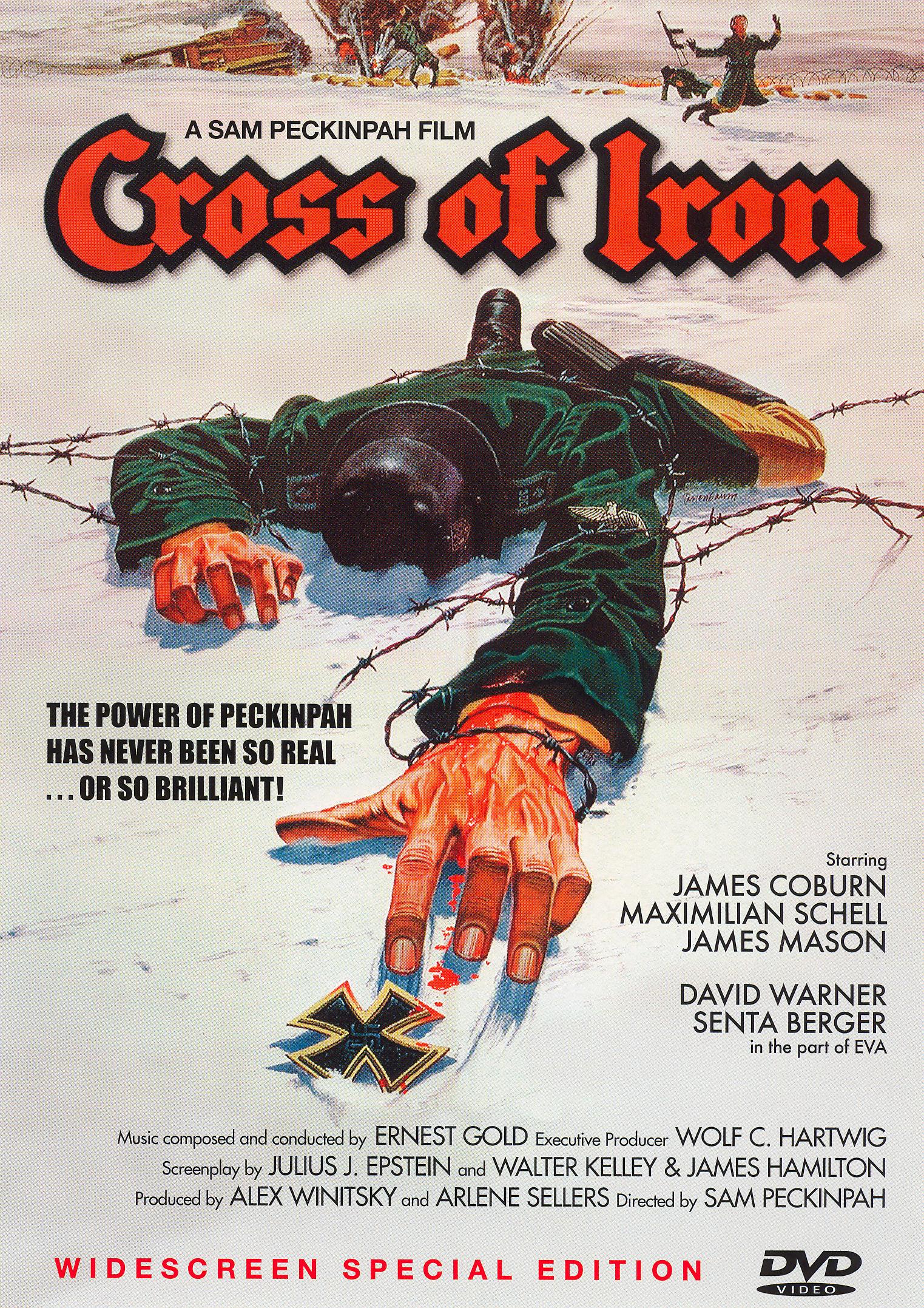 Sam Peckinpah’s autumnal battlefield epic deigns to critique unchecked masculinity by pitting two WWII German army den mothers against each other amid the backdrop of their infantry’s retreat from Russian battle lines. Which sort of raises the question whether Peckinpah only felt comfortable taking a more ambivalent view of the sort of six-shooter sensitivity he previously celebrated in The Wild Bunch when the men standing center stage were Nazis, generally portrayed with zee requisite feline silkiness. (While Cross of Iron is hardly less than three steps from Visconti’s The Damned on the Kinsey scale, it’s also not hard to imagine James Mason’s Colonel Brandt hiding his flaccid, impotent dick behind the Nuremberg defense.) James Coburn’s gruff Sgt. Steiner plays against Maxamilian Schell’s Captain Stransky like a double shot of Jameson opposite a slim schooner of Stoli Razz. Stransky is an effete upper-class Prussian snob whose blue blood has bought him what he hoped would be a cushy, no combat position. A position that would allow him a more overt reflection of his own sense of class entitlement: the opportunity to bark out orders, command respect with no questions asked and be awarded the Iron Cross medal for bravery as a matter of course. When Stransky spends the entirety of one particularly messy altercation with Russian troops hiding in his bunker while most of the men he’s responsible for are massacred, it doesn’t take long for him to realize that the only thing standing in the way of the shiny, metallic status symbol he intends on taking home to parade up and down the French Riviera is Steiner and his testimony that Stransky was nowhere in sight during the raid. (He’s already blackmailed Lieutenant Trebig into backing up his story after discovering the dead ringer for the Village People’s cowboy stroking a blond young soldier’s soft, tender, quick-to-snitch lips.) Steiner would probably love nothing more than to send Stransky back to the Riviera with his shriveled pride tucked away between his legs, but such is his contempt for the chain of command (he’s middle management, essentially) that he refuses to stonewall Stransky’s medal bid. In his muddled web of macho contempt, Steiner can think of no better way to flick off everybody than by allowing the award to go to an undeserving, underhanded coward, thereby deliberately perverting the grading curve on wartime “valor.” Cross of Iron would almost seem a proper mea culpa by Peckinpah for his controversial career, and the pre-Dogville closing credit sequence featuring a risible, anti-patriotic photo slideshow reveals a director still capable of new and inventive provocation tactics. But the fact is that, in the end, the audience is still made to side with the character with the biggest balls.

Hen’s Tooth already released Cross of Iron once, in an insultingly pan-and-scan botch that was priced in Criterion range to boot. Well, this redo release is still overpriced, but at least it’s in the correct aspect ratio and anamorphic. The film’s cinematography was deliberately muted and earthy, and no doubt most of the grain in this transfer is from the source material, but at the same time I perceived pervasive artifacts and shallow focus. As for the audio mix, at least it’s clearer than the muddy picture. You get your choice of English or French, though there are no subtitles if you are hoping to play a game of “let’s pretend this is a French movie even though we don’t speak French.” It’s two-channel, but there’s no indication on the packaging whether it’s stereo or just two-channel mono. If it’s stereo, I couldn’t detect much directionality between the channels.

Considering that the transfer is only acceptable in comparison to what came before, I wasn’t getting my hopes up for the commentary track. But it turns out that Stephen Prince, author of Savage Cinema (a book looking at the rise of violence in movies through the lens of Peckinpah’s films), is more than capable of delivering a Criterion-worthy commentary-full of biographical information and (most impressively) lots of comparisons between the novel and the film-to match that Criterion price.

I don’t know whether Peckinpah is saying that war is hell or that war is gay. Either way, it’s all about the boys.

DVD Review: Marco Bellocchio’s Fists in the Pocket on the Criterion Collection