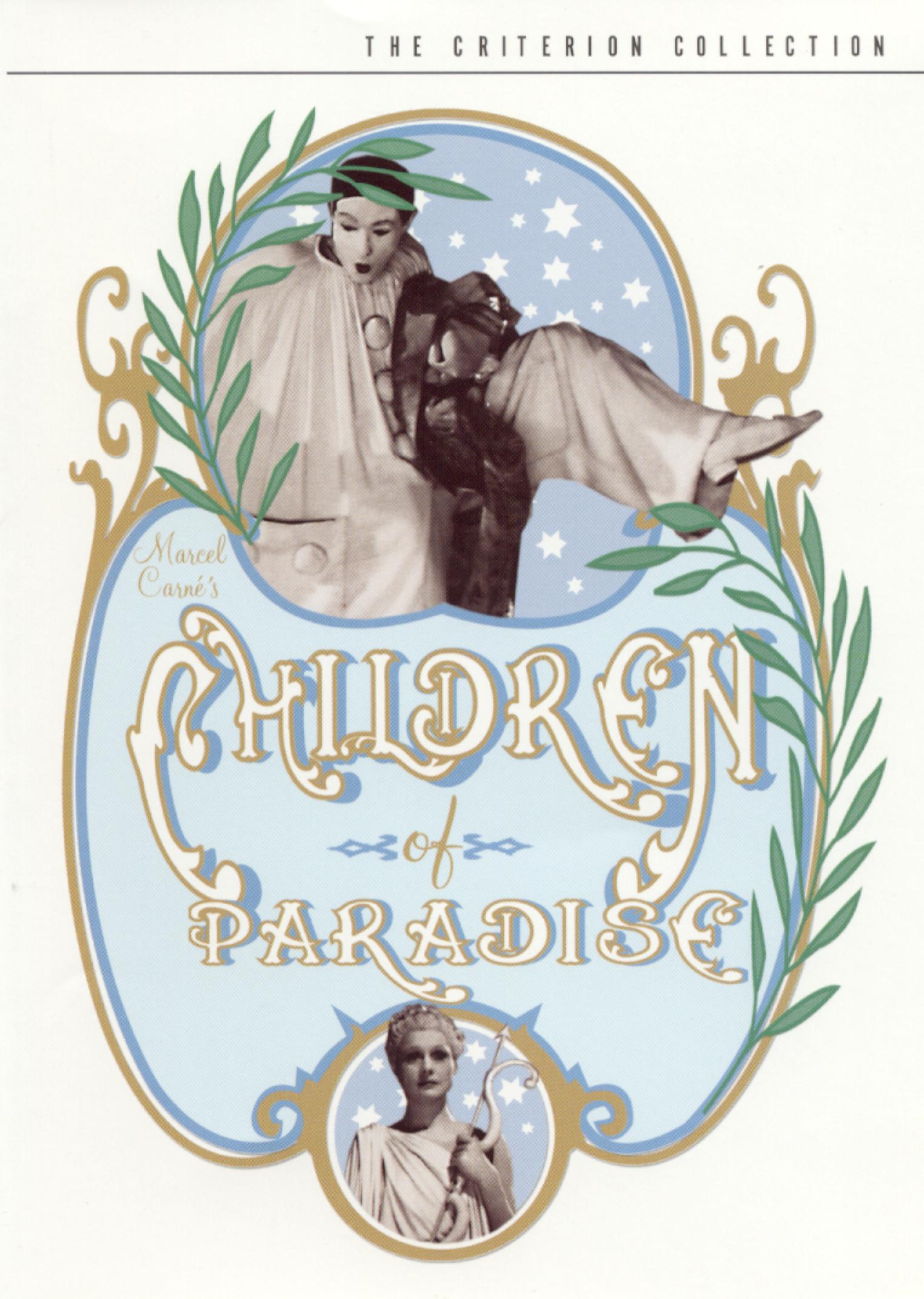 Marcel Carné’s Children of Paradise has often been called “the French Gone with the Wind.” Throughout this woozy 1945 masterwork, Carné and screenwriter Jacques Prévert seem the chart the full gamut of love’s emotional spectrum, most notably in the film’s superior first half, titled “The Boulevard of Crime.” Behold stage queen Garance (Arletty), the embodiment of elusive desire; she’s loved and seduced by no less than four men at once yet she’s incapable of being kept. Indeed, she openly discloses her adoration for freedom when she’s mistaken for a petty thief and subsequently rescued by the pantomime Baptiste (Jean-Louis Barrault). Struck, as if by Cupid, the androgynous Baptiste is a kind of fairy-tale mime that emotes and renders the truth through his observant gaze.

From the beginning, Children of Paradise so thoroughly blurs the line between real life and stage drama that they become indistinguishable from one another. It’s telling that in the film’s opening glide through the Boulevard, Carné seduces the spectator with the allure of the “Naked Truth” circus act, opening its outer curtain only to reveal a bathing woman listlessly staring at her own mirrored reflection.

Just as Carné profoundly articulates his characters’ denial of truth and carnal desire, he luxuriantly worships Baptiste’s ability to transcend these very mortal restraints. Baptiste may be as timid as the scribe Lacenaire (Marcel Herrand) is violent yet both men could easily double as poets. In the film’s stunning bar-brawl sequence, Baptiste breaks bread with a blind man who regains his sight whenever he goes indoors. Garance, sporting cartoon heart earrings, is seduced by the heartless Lacenaire (“I’d spill torrents of blood to give you a river of diamonds”) only to fall instantaneously in love with Baptiste. In this, the film’s most emotionally transcendent sequence, love seems to come so simple. (The emotions divulged here are the complete antithesis of those withheld in a similarly staged sequence from Wong Kar-wai’s In the Mood for Love.)

Baptiste bemoans his childhood retreat into dreams, where his sadness seemingly had a voice. Still, it was an elusive sanctuary; his abusers would nonetheless beat him while he slept, attempting to wake him and interrupt his dreams. An adult Baptiste occupies a similar pantomime purgatory between dream and reality.

Prévert pays just the right amount of attention to the film’s theater-as-life paradigm, wringing complex emotions from the demands placed on the stage actor. Baptiste’s director lives in constant fear of having to incur fines should one of his players speak on stage. Nathalie, the director’s daughter, waits and yearns for Baptiste’s unrequited love. After seeing Garance speaking to another man, Baptiste is frozen in mid performance. While Nathalie cannot match Baptiste’s sightline, she panics and screams. In a film where love becomes the poetry of smiles and motion (witness the spectacular scene where Baptiste’s stage clown must glide around stage in patient pursuit of Garance’s stone statue), Baptiste’s tortured expression is all Nathalie needs to understand what transpires backstage.

Lacenaire prefers the farce to the tragedy and while his opening dialogue should not be taken as an absolute measure of truth and, thus, criticism against Children of Paradise, it’s easy to fault the film’s second half, “The Man in White,” for reverting to tragedy rather than sustaining the film’s poetic blitheness. While Lacenaire may call tragedy the inferior genre, Children of Paradise isn’t so much burdened by tragedy as it is by a time lapse that’s very easy to resent. The film’s narrative focus shifts away from Garance and onto her irascible troupe of suitors and their silly obsessions with revenge. Still, Baptiste’s relationship to Garance remains achingly and breathlessly felt. She disappears like a ghostly freedom fighter only to return (“embellished by memory”) to recapture Baptiste’s heart and disappear into the symbolic masses (Prévert calls them the Gods) that populate the Boulevard of Crime. Carné’s France, unlike the fiddle-dee-dee of Victor Fleming’s cotton pickin’ South, is a poetic realist’s wonderland, a gateway to a dreamworld where human laws are mere judicial errors and love is so painful to hold onto it can only be savored in the moment.

Predictably, Criterion performs another miracle with their double-disc set of Children of Paradise. The disc’s restoration demonstration showcases the painstaking work behind Criterion’s new digital transfer of the Carné masterpiece. Children of Paradise is presented in its original theatrical aspect ratio of 1.33:1 which, along with the impressive clean-up work, honors Carné’s stunning use of soft lighting in fashioning France as a virtual dream world. Some jump cuts were beyond repair and thus remain, though they’re barely noticeable considering the luxurious, precise nature of the transfer. The audio restoration is similarly impeccable, stripping the film of hisses and pops and giving the film’s soundtrack a considerably fuller range.

Plentiful without being intrusive, the extras on this DVD set set give particular insight into the film’s restorative process. A restoration demonstration uses split-screen to compare the film as it existed before Criterion culled a new print from old dupe negatives. Freeze frames allow the spectator to focus on the dirt, debris and scratches that Criterion had to remove using the MTI Digital Restoration System. Criterion darling Terry Gilliam provides the company with another video introduction, fascinatingly ruminating on Carné’s uncanny ability to allow poetry to mix with the big budget. More personally, Gilliam discusses his obsession with the film’s smiling faces and the effects the film’s dreamlike luminescence had on his own films. A 26-page booklet includes an essay on the film and cast biographies by Peter Cowie, Senior International Advisor to Variety and founding editor of the annual International Film Guide. The booklet also contains excerpts from film scholar Brian Stonehill’s 1990 interview with Carné. Stonehill provides audio commentary for the film’s first part, “Boulevard of Crime,” contained on the first disc. Though obviously scripted, Stonehill’s commentary remarkably delves into the film’s beginnings and its many historical and cultural references. Film scholar Charles Affron provides commentary for the film’s second part, “The Man in White.” Affron’s scripted discourse is considerably old school, a bit dry and burdened by affectation. The biggest mystery here is why Stonehill didn’t provide commentary for both parts of the film. The second disc contains the film’s U.S. theatrical trailer, filmographies for Marcel Carné and Jacques Prévert, a production stills gallery and the ravishing production designs by Alexandre Trauner and art director Léon Barsacq. (Trauner spent most of the film’s production hiding from the Nazis. He would later go on to work for Wilder and Hawks in the United States.) Also included is Prévert’s film treatment, which substitutes as a historical companion piece to the film and a general summary of its events.

From laserdisc to DVD, Criterion continues to seek out classic films in dire need of restoration. Considering the wear and tear Children of Paradise has endured for more than 50 years, Criterion’s restoration of Carné’s masterpiece is nothing short of a humanitarian effort. The gods-vox-populi and cinephiles included-can now rejoice Criterion’s release of this French classic.