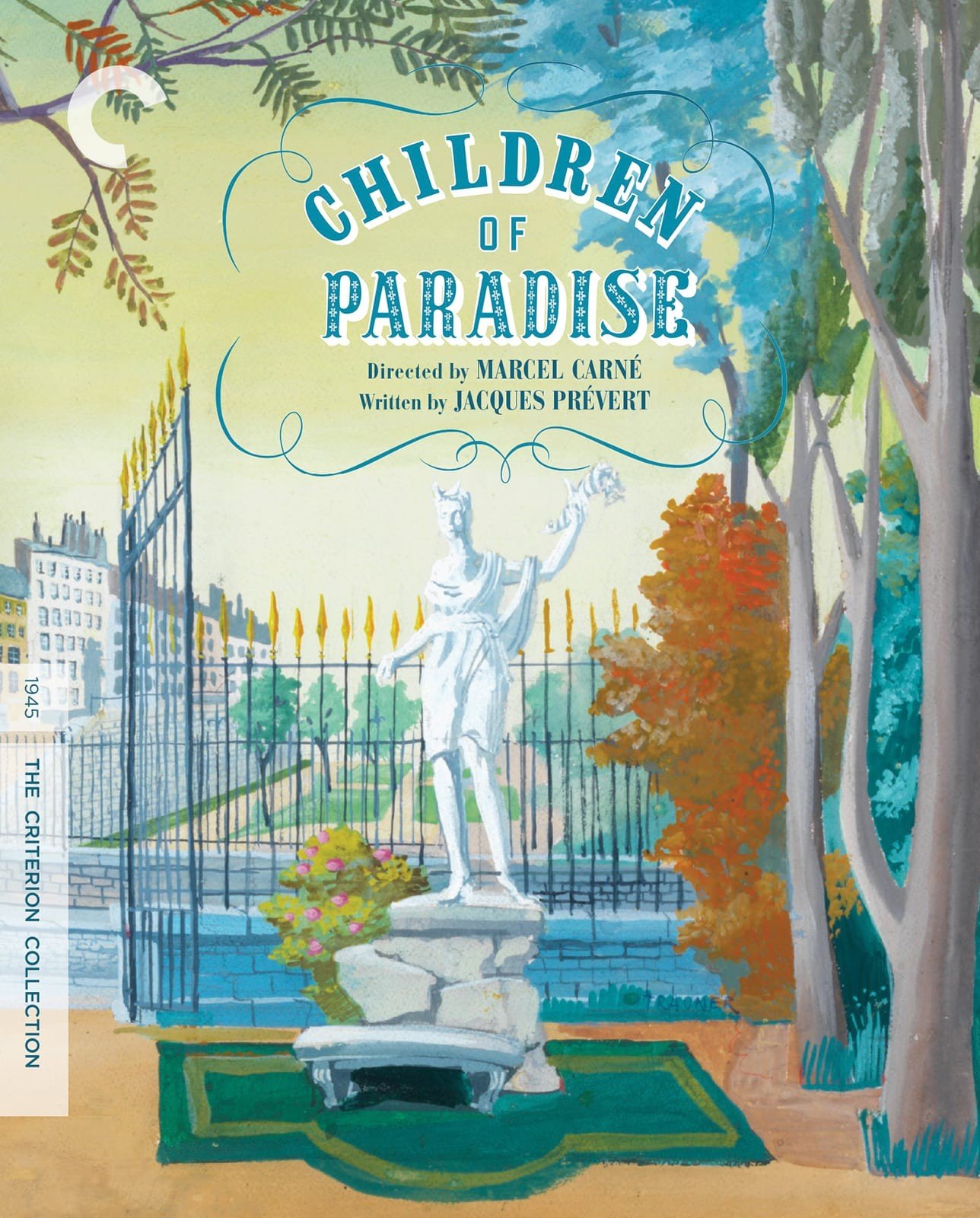 Grand emotional scale is essential to Marcel Carné’s sweeping tale of unrequited love and jealousy, Children of Paradise. Throughout this ornate, 190-minute epic, intense feelings of lust and longing explode at a greater rate than even the weepiest melodrama. Yet it’s the imposing size and depth of the sprawling opening sequence, set amid the expansive “Boulevard of Crime,” that immediately establishes the film’s sheer physical scope. Hundreds of people clog this Parisian back alley like ants, each moving in a different direction; vendors sell goods, criminals pick pockets, and circus performers rise above the masses on pedestals. Like a playful god hovering over the action, Carné’s camera seamlessly glides through the air, capturing in wide angle hundreds of potential stories butting up against each other. “Truth is here,” screams one showman shamelessly advertising his risqué peep show, putting an exclamation point on this ironic juxtaposition of perception and reality.

The controlled chaos of everyday life inspires each densely layered frame of the film, even when it settles down to examine the forlorn story of Garance (Arletty) and the four different men who vie for her attention. As each suitor comes and goes, promising her wealth, security, and redemption, Carné successfully transplants the dizzying feeling of the film’s impressive prologue to more intimate dialogue-heavy set pieces. Since performance is paramount to Children of Paradise, many of these verbal sparring matches take place in dressing rooms and cramped corridors backstage at the Funambules theater, the cavernous workplace and home for a burgeoning community of wacky artists and stagehands whose lives fatefully overlap. While productions of plays like Othello unfold before the public eye, desperate pleas of the heart occur in private. Children of Paradise is at its most dynamic when one spills over onto the other.

A love square of this magnitude produces a myriad of confrontations, threats, and duels between men-at-odds. Carné and his longtime screenwriting partner, Jacques Prévert, build tension slowly through small disappointments, articulating how years of repressed anger and regret affect weak-willed males who can’t control their urge to dominate Garance’s affection. More puppet master than lothario, the murderer Pierre-François (Marcel Herrand) seems to crave debauchery instead of pure emotional connection. He sees Garance as a debased curiosity, yet shows the occasional glimmer of fondness for the woman despite his menacing intent. On the other hand, envy infects the arrogant actor Frédérick Lemaître (Pierre Brasseur) and his rich opponent, Count de Montray (Louis Salou), two men who rely on surface gleam to hide their rotten cores. If Children of Paradise has a moral center, it’s the talented and famous pantomime Baptiste (Jean-Louis Barrault), a shy and tender man-child who first catches Garance’s eye during a pivotal performance on the Boulevard of Crime. But even Carne’s well-meaning protagonist isn’t immune to the destructive consequences of delusional love.

While the film consistently flaunts emotional heft and aesthetic complexity, it ultimately reveals the fragility and futility of the grand dramatic gesture. Verbose declarations of love by Frédérick and brutish promises of violence by Montray only momentarily mask their inevitable downfall. If over-the-top drama spells weakness in the film, silence remains a marker of strength and power. Whether it’s the genuine surprise felt by Frédérick and Garance during a chance rendezvous, or the pure hatred shared by Pierre-Francois and Montray on the steps of a massive stairwell, Children of Paradise puts value in the quiet but devastating details of circumstance. Nonetheless, Carné envisions all relationships, both sincere and malicious, with a caustic eye and darkly comic sensibility. In a fitting bit of sarcastic repetition, Garance continuously tells the egomaniacal Frédérick that “Paris is too small for such great lovers as we,” despite the fact she feels nothing but spite for him.

So Children of Paradise posits any hope for love as a profoundly disappointing illusion, no matter your moral fiber. Garance warns the misguided Baptiste late in the film, “I’m not the way you dreamed.” It’s entirely fitting that during the film’s heartbreaking denouement, Baptiste gets caught in a sea of onlookers while chasing Garance through the Boulevard of Crime. Once again, Carné attaches his camera to a moving crane, ascending to the heavens, his hero swallowed up by hordes of people adorning his now infamous white suit. Romantic entanglement seems to be nothing but a bog in which we all eventually get stuck. The film takes this idea to its cinematic apex, infecting that shimmer and shine of French poetic realism with a nasty sense of comeuppance that can’t be denied.

The Criterion Collection educates the viewer immediately to the difference between this magnificent Blu-ray release and their previous 2002 standard-definition disc. Before the opening credits, inter-titles appear describing in detail the specifics of this 4k transfer scanned in 2011 from an original nitrate negative and two nitrate fine-grain masters. The level of added clarity is astonishing, as most sequences now pop with immense picture detail, shading, and nuance. You can see every wrinkle on Baptiste’s satin pants and the complex patterns lining Garance’s many evening gowns. Note: The intertitles also mention that some sequences couldn’t be saved from green tinting or blurring. The monaural soundtrack, also restored in 2011 from an original sound negative scan, highlights the crisp and layered audio in exterior sequences, especially the scenes on the Boulevard of Crime which consist of hundreds of extras and multiple audio tracks.

Instead of simply recycling the supplemental package from their 2002 DVD release, Criterion has added some new materials to their Blu-ray release of Children of Paradise. First, the holdovers include two superb audio commentaries, one by Brian Stonehill recorded in 1991, and the other by Charles Affron in 2000, each essential pieces of academic study in their own right. Stonehill tackles part one, “The Boulevard of Crime,” dispensing engaging commentary about theme, aesthetics, and performance at a breakneck pace. His indispensable musings about the film’s intricacies and style are endlessly fascinating. Affron, who discusses the film’s second part, “The Man in White,” is more reserved in tone, but no less learned and thoughtful in his analysis. One of Affron’s quotes stands above the rest: “This is a text about time and the effect of repetition and echo in the character’s lives.” Also included here, and featured on the previous release, is Terry Gilliam’s overly excited introduction to the film.

Freshly minted extras include a short on Criterion’s meticulous restoration process, just in case you had any doubt about the company’s mastery of technical detail, and a trio of featurettes: the 2009 doc “Once Upon a Time: Children of Paradise,” a banal made-for-television piece directed by Julie Bonan that discusses many specifics about the film’s history, including Arletty’s affair with a German officer during production; Paul Ryan’s visual essay, “The Look of Children of Paradise,” an enticing 22-minute examination of the film’s themes and how they relate to set design and costume: and “The Birth of Children of Paradise,” a 1967 doc by German director Peter Gehrig featuring interviews with key crew members and New Wave directors like Jacques Demy and Agnès Varda about the film’s lasting canonical influence. Rounding out the package: a U.S. trailer and a booklet featuring a sterling essay by Dudley Andrew and excerpts from an interview Brian Stonehill conducted with Marcel Carné in 1990 for the Criterion laserdisc release.

Marcel Carné’s sweeping, yearning, and ravishing Children of Paradise warns that romantic entanglement is nothing but a bog in which we all eventually get stuck.