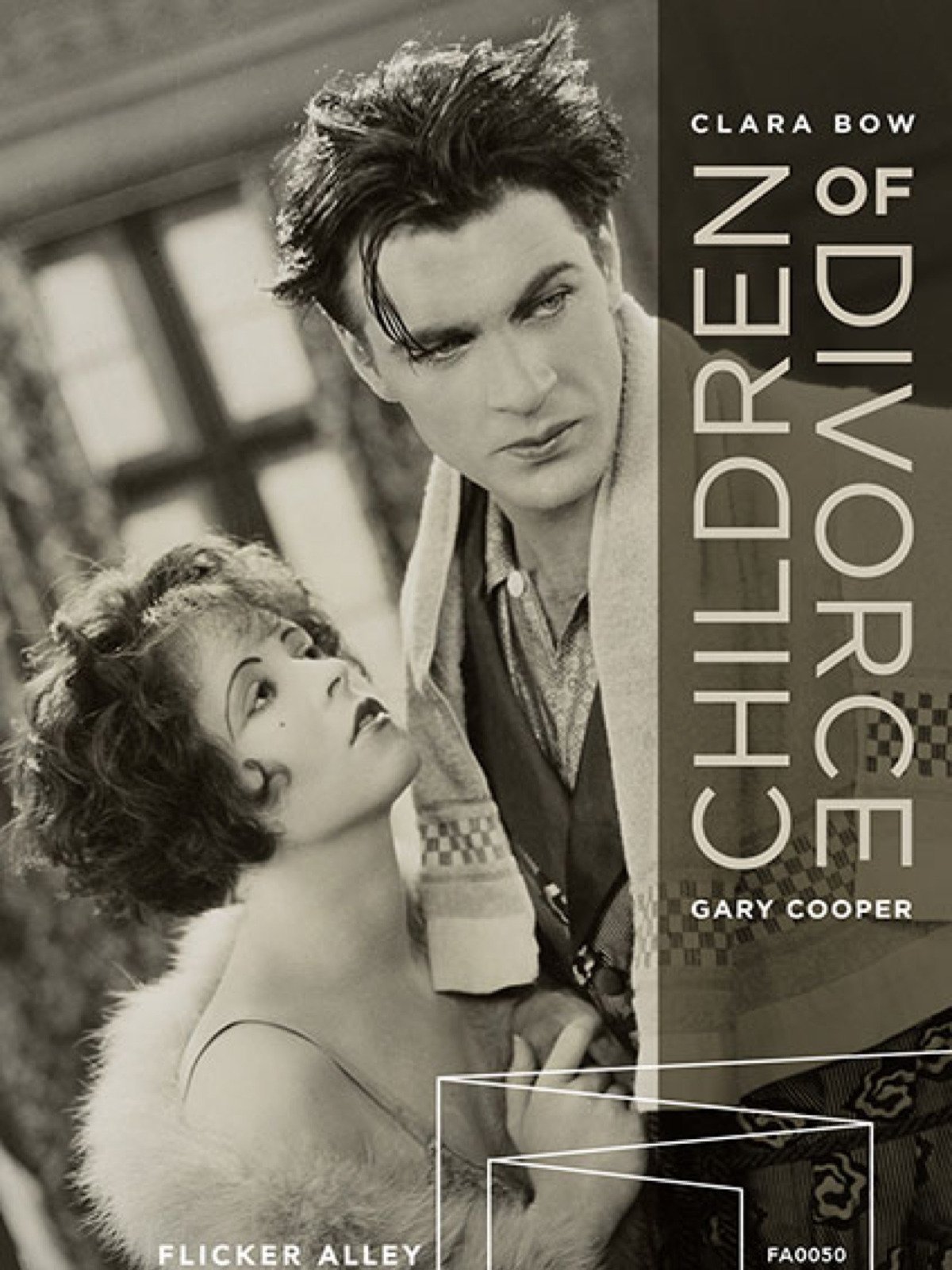 One of the most remarkable aspects of Clara Bow’s career during the silent era is how she could imbue rather stock melodramatic figures with an emotive and expressive range of depth. Part of that derives from her singularity as an actor, capable of deploying wit, verve, and spunk without reducing a character to only one of those traits. Children of Divorce could be the key evidence of her unique performance style. As Kitty Flanders, a young socialite with a taste for the company of men, she’s first seen swatting a ball across a tennis net. One scene later and she’s in a gown at a ball, eying her childhood friend, Ted (Gary Cooper). Later, after tricking Ted into marriage, she oscillates between sulking and anger as she discovers Ted’s desire for her longtime friend, Jean (Esther Ralston). Known as the original “It” girl, Bow flaunts her performance range and sexuality as indecipherable extensions of the same act.

The story at the core of Children of Divorce is textbook melodrama, directed with workmanlike verve by Frank Lloyd (and an uncredited Josef von Sternberg), but without the hallmark of a distinct directorial presence. All the better, perhaps, as this allows Bow’s presence to retain center stage, as dutiful medium shots and a handful of tracking shots capture her performance at the expense of cinematographic panache. Lloyd does get in some cute touches, though; when Kitty and Jean walk arm in arm as adults, the scene momentarily dissolves to them as children, sauntering in the same position. Lloyd pinpoints time’s passage as a facet of personality, so that Kitty and Jean’s eventual rift over Ted is consistently deepened by the prior, visual suggestion of their partnership. One would not be remiss to read a lesbian subtext into the film, especially during the prologue, in which little Kitty asks Jean and Ted, who’ve just sworn to marry one another when they’re older: “Who will marry me?” It’s Jean, not Ted, who subsequently comes to comfort her.

It’s equally tenable to understand Bow’s performance style as an expression of both gender bending and playing with the thin separation between children and adults. At another point in Children of Divorce’s prologue, a man makes a bet with a woman that she can’t convince a young boy to kiss her on the mouth. When the child refuses, she playfully chases him around. Bow maps out the same sort of tension on her face by making girlish expressions, whether sucking in her cheeks or flaring her eyebrows, which contrasts with her late-film desperation as a former child of divorce, now a woman and wife about to commit the same act as her parents.

The film is ultimately a triumph of casting and performance style, with Jean and Ted’s deferred marriage providing the source for understanding each character’s hidden psychology. As Jean, Ralston projects a nondescript and rather inexpressive interest in life and love; Jean’s compelled by stasis and comfort, though not to the extent that she would marry for them, as she turns down such a proposal from Prince Ludovico (Einar Hanson). Cooper’s performance is guided by his eyes, which articulate Ted’s doubts, joys, and frustrations by variegating his gaze. Part of Children of Divorce’s strength lies in how the performers obscure whether the film is a comedy or a tragedy. Even when it turns out to be the latter, charm and joy still pump through the film’s veins, even if only as a relic of the good times, now past.

Considering that this is the “Blu-ray/DVD world premiere” of Children of Divorce, the audio/visual quality is superb. Though the image shows considerable wear at times due to irreparable damage from the negative’s deterioration, the image itself brims with a sharpness that’s come to define the roundly virtuoso work from Flicker Alley. The actors’ faces are especially clear in close-up, which helps to replicate what it must have been like to sit in a movie palace 90 years and look up at these emotive visages. The monaural track features a fitting score by the Mont Alto Motion Picture Orchestra, which flawlessly hums along with the film’s image.

In addition to a booklet with an essay by biographer David Stenn, the disc contains a solid hour-long documentary on the life and career of Clara Bow, narrated by Courtney Love. Bow’s life was fraught with hardship from a young age, as her parents routinely abused her and deplored the idea that she wanted to become an actor. Bow’s career during the silent era is given the most attention, with clips from her various features. Like many other silent stars, Bow’s transition to talkies was rocky; she made her last feature in 1933. The doc’s perspective is a good primer on how studio stars, especially women, were routinely cast aside once their initial fame dwindled.

With Flicker Alley’s release of Children of Divorce, one of the best performances from one of classical Hollywood’s greatest actors is finally given the red-carpet Blu-ray treatment it deserves.