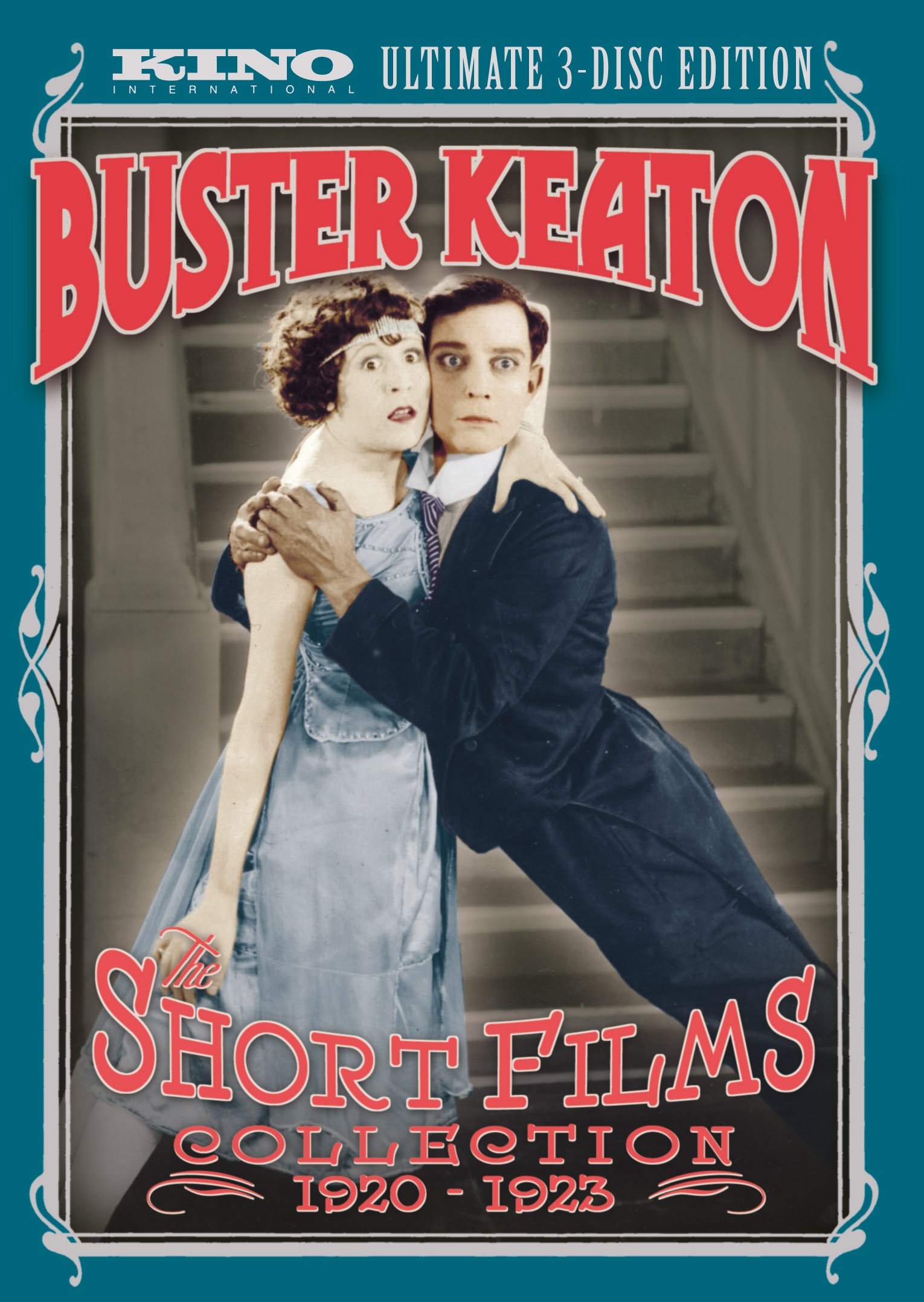 The long-standing description of Buster Keaton‚Äôs deadpan as ‚ÄúThe Great Stone Face‚Äù misleadingly characterizes one of the most subtly expressive visages in the cinema. It might further encourage the false conclusion that impassivity or steeliness is a key property of his immortal character, as seen in the 19 silent shorts he produced, co-directed, and starred in between 1920 and 1923, following his apprenticeship with Roscoe ‚ÄúFatty‚Äù Arbuckle. Seen together in this collection, one of the films‚Äô great themes seems to be the adaptability of Keaton‚Äôs naif. Whether by design (he‚Äôs resourceful without much common sense) or serendipity, he smoothly glides into appropriate motion in inappropriate settings, as a blacksmith courteously offering horses a wide selection of footwear, or as a fugitive trapped in a riverboat‚Äôs paddle wheel who commences to run like a hamster. Along with the creation of these haunting, surrealist-friendly tableaus, Keaton remains a gymnastic, dynamically funny performer.

Though these two-reel comedies never attain the physical scope of his most epic feature, The General, the best of them are conceived with ambitious and screen-bursting acts of imagination. One Week finds newlywed Buster and his spouse (Sybil Seeley) assembling a prefabricated house according to a scheme sabotaged by an ex-rival; the resulting crazy-angled construction doesn‚Äôt faze the couple much, they just cope with a foundationless hearth that spins like a top in a windstorm. In The Boat, Keaton and Seeley are now parents of porkpie-hat-topped mini-Busters, and his decidedly unseaworthy homemade vessel Damfino puts the family in the kind of mortal peril seldom associated with slapstick. James Agee termed this discreet but haunting vein of darkness ‚Äúa freezing whisper not of pathos but of melancholia,‚Äù and it makes for an illuminating contrast with Charlie Chaplin‚Äôs shorts, with their strokes of sentiment and social commentary. When Keaton flees down a broad boulevard from hundreds of hell-bent police in his enduring Cops, there‚Äôs not a whiff of the Little Tramp‚Äôs oppressed victim, just an existential norm of pursuer and pursued.

If, as in my eyes, Keaton‚Äôs shorts take a back seat to Chaplin‚Äôs, just as his features seem a greater total achievement than his contemporary‚Äôs, the distinction is narrow and mostly a function of artist fitting form. Keaton‚Äôs motifs of decisive action via modes of transit, struggles in wooing and forming a family, and dreams and fantasies would continue to grow rich and strange with his move into six-reelers, while Chaplin lost some of his snap and vulgarity in expanding his plots with melodrama and Victorian romance. While Keaton retired broad smiles with his stint as Arbuckle‚Äôs second banana, in The Playhouse he atypically pulls a plethora of simian faces when made up as a performing monkey, after an introductory fantasia in which he plays an entire orchestra, cast of minstrels, and audience members in a theater with characteristic elegance and poise. ‚ÄúThis fellow Keaton seems to be the whole show,‚Äù one of his incarnations remarks, and in these six-plus hours of innovative popular art, Buster seized his chosen medium with the confidence of a blooming master.

Remastered mostly from 35mm archival elements (in a few instances, from prints that were discovered in a Keaton home long after he moved out), the black-and-white, occasionally tinted visuals have plenty of imperfections, in keeping with Kino‚Äôs policy of not using ‚Äúnoise-reduction‚Äù digital cleanup that would compromise the sharpness of the image. The result is nevertheless a pleasing upgrade from the distributor‚Äôs box set of a decade ago, with generally satisfying contrast and stills used to replace lost scenes in a couple of titles. (And four of the shorts do have alternate, digitally enhanced versions for non-purists.) The musical soundtracks are mostly those arranged by Robert Israel for the 2001 box, but six new ones are supplied by composer-accompanist Ben Model, all good to excellent.

Short of owning it in conjunction with the 11-disc Kino box of shorts and features, this set of supplements comprises a nonpareil visual seminar on Buster Keaton‚Äôs cinematic craft and history. Fifteen of the shorts have accompanying ‚Äúvisual essays,‚Äù treating through clips and production stills such topics as Keaton‚Äôs casting of supporting players, his amateur engineer‚Äôs penchant for designing his props and sets to support elaborate trick effects, how his 1921-22 productions were affected by the scandalous trials of his mentor Fatty Arbuckle, and Kino‚Äôs method of finding and restoring the intertitles for the films. Unique among the essays is accompanist Ben Model‚Äôs explanation of how his scoring of Buster‚Äôs masterpiece Cops has evolved over 30 years of playing at screenings. Further, four short pieces by author John Bengtson employ detective work to identify Keaton‚Äôs shooting locations, many in the streets surrounding his Hollywood studio (the same facility where, just a half-decade earlier, Chaplin had made his brilliant series of Mutual shorts). The Men Who Would Be Buster shows examples from five contemporaneous shorts by other comics who borrowed gags or sequences from Keaton shorts (including Stan Laurel, pre-Hardy, and Charley Chase). Two shorts feature Keaton cameos‚Äîone in which he acts as a waiter to Chaplin and Hollywood moguls‚Äîand there are a handful of alternate takes from The Blacksmith, The Balloonatic, and The Goat. The set‚Äôs eight-page booklet features an essay on Keaton‚Äôs career by Jeffrey Vance, with brief notes on the production and significance of each short film.

This three-year output of Buster Keaton Productions, exhibited and explained, makes for a Damfino time on the couch.

Blu-ray Review: Stanley Kubrick‚Äôs The Killing on the Criterion Collection