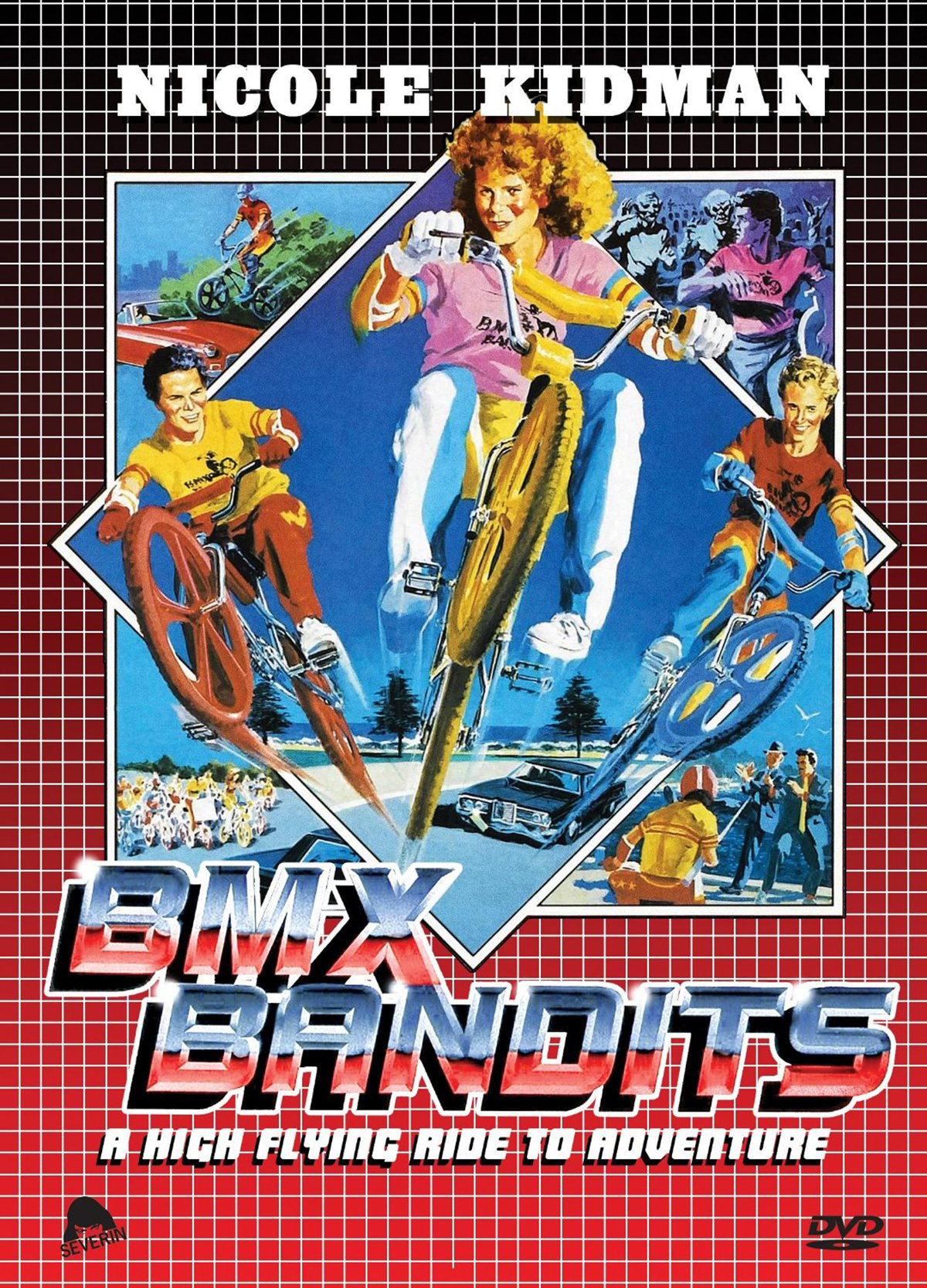 If I were an Australian kid and I grew up when BMX Bandits was first released theatrically in 1983, I’d probably grow up hating bicycles. The film is probably the most misleading feature-length commercial for a toy ever devised. Filmed with all of the panache of a Happy Meals advert, the film opens with a montage sequence that sets the stage for the film’s real stars: BMX bikes. They come with neat accessories like shoulder pads, helmets that glint in the sunlight, multi-colored foot pedals, and hand brakes that, uh, brake real good. Director Brian Trenchard-Smith (The Man From Hong Kong, Turkey Shoot) is more interested in selling the bikes than he is in making a competent adventure film that also happens to feature children riding shiny, profitable bicycles.

Over the course of BMX Bandits, a young Nicole Kidman, in her feature-film debut, and two nerdy boys will go places and do stunts that, in real life, their child audience will probably never be able to no matter how many accessories they buy. They ride through water fountains, down water park slides, off ramps, down escalators, into warehouses, through office buildings, on the beach, into graveyards, even skirting through construction yards. These bikes are so active that there’s no room for the film’s already lackluster child cast to shine.

The very idea of retroactively idolizing BMX Bandits is so perverse that it’s no wonder that Quentin Tarantino, irresponsible film historian par excellence, is the most famous and also the most vocal of its latter-day boosters. Plot doesn’t matter as screenwriters’ Russell Hagg and Patrick Edgeworth’s narrative only serves to inadvertently interrupt the film’s cheesy stunt scenes. BMX Bandits follows the bikes owned by P.J. (Angelo D’Angelo) and Goose (James Lugton). These kids love nothing more than being seen riding around in their flashy nylon bike outfits, which undoubtedly were sold in the same primary colors that Lugton and D’Angelo wear in the film. The two literally bump into Judy (Kidman), a babe working at a local super market, and wind up getting her fired from her day job. Somehow, after this accident, the three of them wind up becoming best friends. Their unyielding bond is confirmed by the way that they ride around on their BMX bikes together while trying to get away from a bunch of bank robbers. Oh, yeah: They also unwittingly steal a box of one-way police-band walky-talkies and now being chased by bank robbers. The robbers drive around in cars, which means their parents must hate them.

Ignoring the fact that BMX Bandits is as intimate as a trip to Toys “R” Us, it has almost nothing to offer in the way of impressive stuntwork, carefree yuks, or semi-competent acting. Trenchard-Smith, a master at condescending to his audience, clearly diluted Hagg and Edgeworth’s already toothless concept; that said, there was probably no good way to dress up a line as dire as “You’re right in the poo now, sister” or even “Your little walkie talkies have gone walkies.” The film’s stunts may have been too complex for the film’s stars to accomplish, but they’re all fairly modest in the long run and none of them are memorable. Which leaves the film’s rancid and largely undeveloped human element, of which there is little to say except that the kids can’t act, the adults are constantly bonking into each other like overgrown children, and when the going gets tough, everyone scolds everyone else that “life’s not fair.” Maybe to a kid watching BMX Bandits, but I tend to doubt the same is true for the film’s human characters.

Severin’s DVD release offers a commendably sharp visual transfer: John Seale’s impeccable, advertising-quality cinematography is nicely showcased and all of the colors of the kids’ bikes and uniforms are very crisp. The audio track is well-layered: The sound effects of the bikes stand out particularly, and for a movie like this, where dialogue doesn’t really matter, that’s crucial.

If you can make out the tiny font that Severin used for their cheap-looking disc menus, you’ll find that the special features on this release of BMX Bandits are all as self-serving and devoid of content as the feature itself. A recently commissioned featurette, including interview footage with the film’s screenwriters, director, and producers, confirms how imagination-challenged its creators were. They all talk about how they were inspired to make the film the way they did as if they had created The Conformist. An audio commentary track with director Brian Trenchard-Smith is just as useless. He talks guardedly about the film, talking about how if anything he should have played the film more safely for fear of scarring child audience’s with the films tame stunts, and virtually non-existent gunplay (the robbers load and cock shotguns at one point). Archival footage of a young Nicole Kidman is only essential for diehard fans of the Aussie actress who need to know what she looked like pre-plastic surgery. There are also some trailers for other Severin titles featured on the disc.

If you like your movies with the same passion as an impressionable child of the ‘80s loves BMX bikes, BMX Bandits is the movies for you!