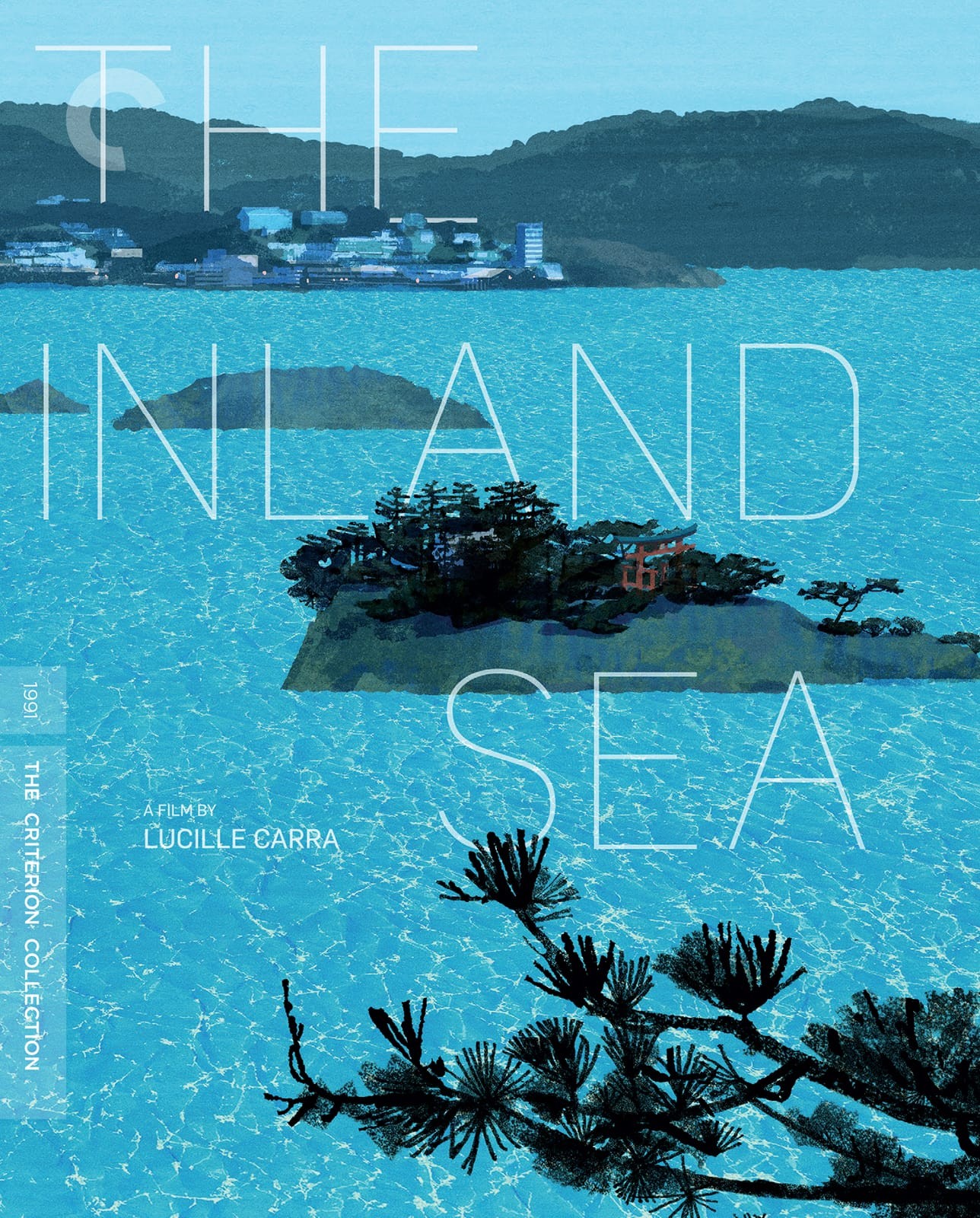 To call Donald Richie’s The Inland Sea a travelogue would be an understatement. In his 1971 book, Richie details his experiences living in Japan, especially his preoccupation with the Seto Inland Sea, which he describes as a “landlocked, lakelike body of water bounded by three of Japan’s four major islands” that would stretch in another part of the world from “Little Rock to Dallas.” But travelogues often inform straightforwardly, while Richie’s writing is obsessive and poetic, his prose achieving a sing-song rhythm that embodies in itself the tranquility for which the author yearns. The lean, mysterious The Inland Sea renders Japan a mirror reflecting a solitary traveler’s soul—a traveler who mourns the loss of cultural specificity to capitalism.

Lucille Carra’s 1991 film adaptation embraces the narrative freedom of its source, wandering the islands of the Inland Sea and riffing on various qualities of land, air, water, Shinto shrines, and the differences between the rural country—especially the fishermen’s communities—and bustling cities such as Tokyo and Kyoto. Carra fashions images of startling beauty, filming them with a directness that reflects the accomplished succinctness of Richie’s prose. In certain scenes, the Inland Sea suggests a great, blue mirror, embodying the autobiographical myopia of Richie’s book. In other sequences, the sea resembles a gleaming and ever-shifting prism, embodying the stillness of time that Richie expressed via a metaphor that isn’t in the film: a shrine that’s torn down and rebuilt every 20 years in order to resist the ravages of age.

Just as travelogue is an imprecise descriptor for Richie’s book, the free-associative film that Carra has made from it isn’t exactly a documentary. In their respective work, Richie and Carra embrace a kind of atomic structure, savoring the pleasure of the isolated sentence and the isolated image or sequence. In both the book and the film, one feels the pleasure that’s taken in observing details, such as the richness of quotidian experience, and rendering them immaculately. In the film, monkeys wander island landscapes with a grace that speaks to Richie’s longing for isolation, while cats linger in the trees, and we see boats as they drift along the sea, exploring a body of water that Richie likens, in its dimensions, to a great river. Bright red shrines dot the landscapes, their streamlined architecture suggesting spiritual fulfillment.

Carra’s The Inland Sea has something that Richie’s book does not: the author’s speaking voice. In the film, Richie reads selected portions of his prose, and his rich, haunted diction completes his writing, dramatizing his joy over Japan’s beauty and his despair over encroaching commercialism—over impersonal hotels, pollution, bustling city life modeled after the conditioned desires of tourists. There’s a reactionary quality in Richie’s writing and voice performance, as he very much believes in the purity of isolated country life. In this belief, there’s an irony that Richie and Carra haven’t reckoned with: If we are to be isolationists, we are to deny ourselves of the pleasure that Richie knows as a longtime inhabitant of Japan.

Carra and Richie offer a purposefully self-absorbed vision, a white man’s poetic reality of a foreign land that has limits in the film. There is, in particular, one huge missed opportunity: the 20 years that have elapsed between the publication of the book and the production of the film have barely been accounted for. In an epilogue, Carra documents Richie as he was at the moment, in which he acknowledges that his fear of losing the Inland Sea to globalization hasn’t been entirely realized. Otherwise, the ensuing years and the perspective they can potentially offer are ignored. In his book, Richie correctly diagnoses the danger of modern travel and social unity of tamping down cultural differences, and his validation of country life has an existential majesty. Carra pictorially complements Richie’s writing but doesn’t further it, as she recaptures a 1970s-era perspective. Her respect limits her sense of invention. Carra’s The Inland Sea is an adaptation, though perhaps it should’ve been a sequel.

The Criterion Collection has outfitted The Inland Sea with a characteristically gorgeous transfer. The image has vibrant colors, especially the blues and whites of the sea and the reds of the Shinto shrines. There’s also a healthy, attractive amount of grain to the image, and clarity is superb. The soundtrack has a robust soundstage, abounding in subtly immersive details, such as the rustling of monkeys through a field or the lapping of waves. This transfer affirms an obvious intention of Lucille Carra’s film: to establish a visceral sense of place, and to inform said place with detail and romantic majesty.

This is a slim but informative supplements package. In a new interview, recorded for Criterion in 2019, Carra discusses her attraction to Donald Richie’s 1971 book, detailing how its beauty and intimacy resonated with her. In another new interview, critic and filmmaker Paul Schrader and critic Ian Buruma discuss their personal experiences with Richie, who was monumental in nurturing American audiences’ familiarity with Japanese cinema. (Schrader remembers a “kindness” that Richie paid him, which was a response to letters of inquiry that began a correspondence.) Best of all, there’s an interview with Richie that Carra shot in 1991, which revels in the writer’s gift for speaking in poetry. Richie discusses Japan in his typically beautiful style, complementing the film that Carra has made from his work. Finally, there’s a booklet with a lovely, contextualizing essay by novelist Arturo Silva.

Criterion honors the beauty of this evocative film poem of a Japan that may be slipping away.