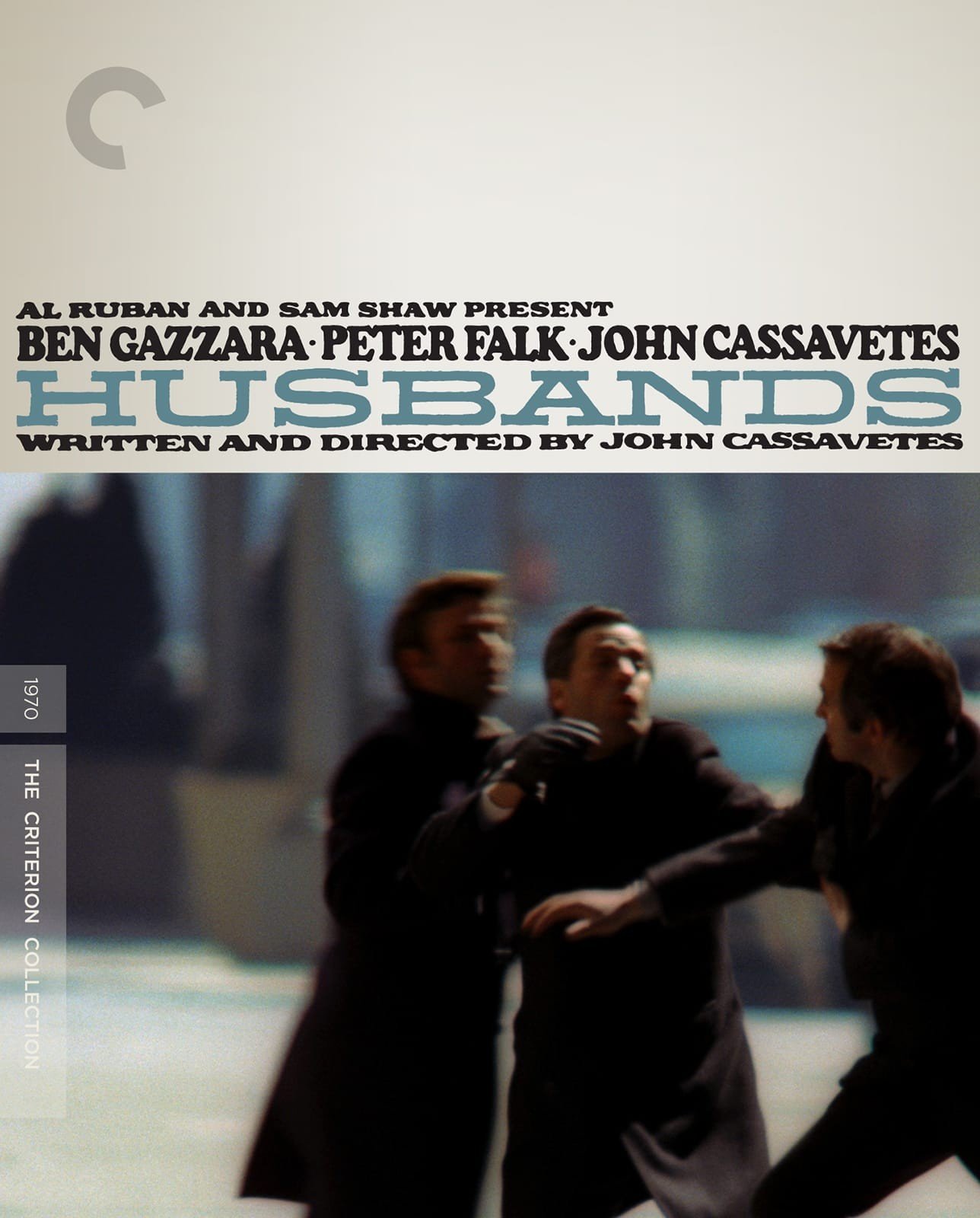 John Cassavetes offered his actors and, by extension, his audience a profound sense of space. Resisting the tempo of pop films, Cassavetes allows scenes to go on and on while characters offer sustained arias of anguish, humor, and ball-busting. In such sequences, we feel a grappling for catharses—for the characters as well as the actors. This double-awareness is at the heart of Cassavetes’s cinema, as the actors and characters often bleed together, allowing the work of the actors to parallel the work we put into the everyday roles that we play for the sake of finding meaning or approval. In such an auto-critical environment, no gesture, no line, is taken for granted, as Cassavetes urges his actors to parse every element of an interaction for significance. He captures moments of minute, seemingly spontaneous behavioral insight that are essentially impossible in a film that buzzes along on autopilot, hitting tidy plot beats.

Husbands, Cassavetes’s follow-up to Faces, and his first film with Ben Gazzara and Peter Falk, is exhausting and formally radical even by his standards. The 1970 film is gross, juvenile, macho, thorny, and features moments of agonizing physical and emotional torment—moments that are especially disturbing considering that some of the actors involved might not have been in on the joke. Yet the obstinate recklessness of Husbands is the wellspring of its brilliance. In his devotion to pain, to the prolonged, ongoing, and dangerous work of releasing pent-up emotion (which, here, resembles acting as well as therapy), Cassavetes mounts one of the most searing and evocative portraits of grief in American cinema.

Husbands opens on a montage of snapshots of families horsing around at a pool party. Though women and children are visible, four men are emphasized: Smoking, drinking beers, and flexing their biceps for the camera, they’re almost a parody of a certain kind of domesticated masculinity. With these remarkable images, Cassavetes instantly communicates the breadth and comfort of the men’s friendship, and how, even in moments of joy, they subtly push their families away, erecting their own world. This montage is followed by a jarring cut to the inside of a car pulling into a cemetery. One of the men, Stuart (David Rowlands), has died suddenly at an early age, reducing the group to three: Harry (Gazzara), Archie (Falk), and Gus (Cassavetes).

In these early scenes, Cassavetes and his other actors establish a tension that will run throughout Husbands. Harry, Archie, and Gus ride together to Stuart’s funeral, and when they get out of the car, Harry separates himself from the group, escorting Stuart’s grandmother (Judith Lowry) to the ceremony. Walking ahead with the elderly woman, Harry shoots suspicious, wounded glances at Archie and Gus while they exchange patter about the obscenity of the pomp of such an event, which Archie in particular believes desecrates Stuart’s memory. In this conversation, Archie says that tension is what kills someone—not actual illnesses. The men crave a purging, a reckoning with their sadness, and Archie is fumbling at the expression of this need while Gus pushes them away, feeling rejected. Searching for an emotional expunging, the men will continue to alternately repel one another away and draw each other in close, proclaiming their love and suspicion of one another, sometimes simultaneously. In each of the film’s long sequences, the men harass one another and others, trying to give voice to their gnawingly undefinable sense of need and alienation.

In many films, a character’s grief is a plot necessity to be perfunctorily gotten out of the way, but grief, and the ugly personal elements it can unearth, are front and center in Husbands. After the funeral, Harry says he’s going to get drunk, at which point Cassavetes employs another jarring cut to the men already hammered, fucking around on the streets of New York City. The joy of initial intoxication has been omitted, as these men are now in a fugue state that will consume them for the remainder of the film’s 142 minutes.

Their bender leads them to a bar where they sit at a long table with a variety of people who are likely strangers and who they encourage to sing songs for Stuart. The three men allow most of the people to sing undisturbed, though they seize on a woman named Leola (Leola Harlow), telling her she’s terrible, making her sing again and again, looming over her. Leola’s reason for submitting to this abuse is among the film’s many mysteries, and Cassavetes stretches this sequence out so long that it begins to suggest purgatory. The next sequence, related to the bar scene, is also astonishingly long, lingering on the men as they argue in a small bathroom, very drunk, trying to make themselves vomit. Over the course of this sequence, Harry once again separates himself from the group, resenting Gus and Archie’s conspiratorial air.

Harry’s ongoing exclamation to Leola—“It’s terrible! More heart!”—could be said to suggest Cassavetes’s guiding aesthetic sentiment, which he deconstructs mercilessly. On one hand, the film is a masturbatory orgy of backslapping male indulgence, as the three men are always tussling with each other, hinting at an interior violence that practically demands expression. However, Cassavetes is intensely aware of the men’s cruelty, particularly toward women, most disturbingly when Harry forces himself on his wife, Annie (Meta Shaw). In another extended sequence, once the men run away to London, Gus tries to seduce a British woman, Mary (Jenny Runacre), and grows increasingly aggressive with her until foreplay and sexual violation become indistinguishable from one another. By contrast, Archie’s aggression tends to surface when women accept him. The men are insufferable, dangerous, pitiable, pathetic, and, for the life force these extraordinary actors lend them, weirdly charismatic.

There’s a dangerous temptation to reduce Cassavetes films to theme, especially pertaining to gender, in the process eliding the wild poetry of his work. The dialogue in Husbands, partially improvised but more written and controlled than is generally acknowledged, is composed of simple language that’s often repeated over and over for an effect that’s comic as well as existential; as loud as his male characters can get, they can’t truly hear each other. And compositionally, Husbands is a feast of warm and cold hues and of close-ups, mostly of faces, as they betray the wealth of emotion that the characters seek to deny with their talk. There are also unforgettable group shots, in which bit characters behave in ways that are inexplicable to the protagonists and us alike. (There’s an audaciously surreal scene in which a drunken Gus, a dentist, tends to an uncontrollably laughing woman.) The intimacy of this film and its endless, hopeless subtext and element of counterpoint and ambiguity is head-spinning—this could be Cassavetes’s No Exit. With Husbands, the filmmaker fashioned a miasma of anguish, taking his aesthetic to its breaking point and in the process redefining it.

Given the improvisatory nature of shooting Husbands, the film naturally lends itself to visual inconsistencies that purposefully bolster a docudramatic “found” effect. Given those circumstances, this is still a remarkably consistent transfer, with vibrant, sometimes almost painterly colors, lovely flashes of light, clean backgrounds, and viscerally specific details, particularly in terms of facial close-ups and the fabrics of clothing. The monaural soundtrack boasts a similar vibrancy, and renders the dialogue in this very talky film, especially the frequent interruptions and altercations, with an exhilarating lucidity.

A new interview with frequent Cassavetes producer Al Rubin features several excellent stories, such as how the filmmaker faked a huge set piece to inspire Columbia Pictures to release and bankroll Husbands after the production had run out of money. Rubin also discusses Cassavetes’s frustration in the 1950s as an actor for hire, and how his methods grew out of a need for a greater and more original expressivity. Perhaps most vitally, Rubin refutes the myth that Cassavetes’s films were entirely improvised, as the scripts were altered and forged around improvisations. On the set, however, the primary improvisatory element was the blocking and movement of the camera. Cassavetes biographer Marshall Fine’s 2009 archive commentary offers quite a bit more detail on these methods as well, complementing the Rubin interview.

Another new interview, with actress Jenny Runacre, delves into the shooting of her troubling scenes opposite Cassavetes while plumbing the film’s sexual violence. Runacre also speaks of the work she’s done for other notable filmmakers such as Michelangelo Antonioni, Pier Paolo Pasolini, and Ridley Scott. (On the set of The Duelists, Harvey Keitel told Runacre that Martin Scorsese made the cast of Mean Streets watch Husbands over and over.) Other odds and ends also address Cassavetes’s process, such as the 2009 featurette “The Story of Husbands—A tribute to John Cassavetes,” featuring Rubin and Ben Gazzara, and a new video essay that collects the filmmaker’s thoughts on acting to suggest a singular interview. An episode of The Dick Cavett Show finds Cassavetes, Gazzara, and Falk clowning around in a manner very similar to the behavior of their characters in the film, and an essay in the liner notes by filmmaker Andrew Bujalski beautifully articulates the “abstraction” of Cassavetes’s direction, as well as the sense of absence that governs Husbands.

Criterion outfits one of John Cassavetes’s greatest and most daring films with a stunning transfer and updated supplements that contextualize the filmmaker’s methods of creation.