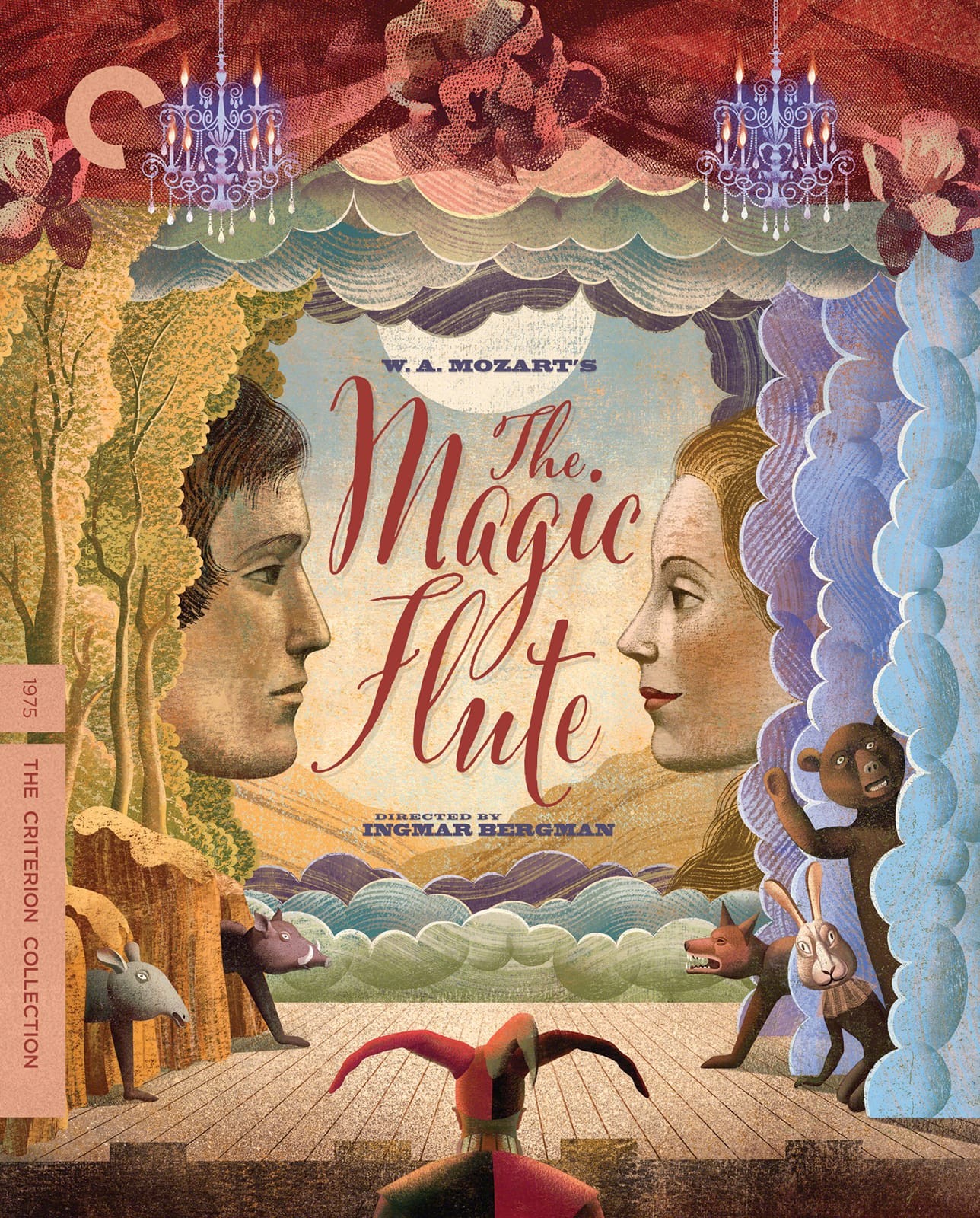 With his uncharacteristically cheerful The Magic Flute, Ingmar Bergman managed the challenging task of preventing his brooding existential musings from coloring the proceedings, while also fusing the seeming incompatabilities of opera and cinema in a way that pays respect to both art forms. By embracing the pure artifice of opera while employing rhythmic editing, an abundance of his typically expressive close-ups, and Sven Nykvist’s especially nimble camerawork, Bergman transfigures the stage space into something truly cinematic, spinning a yarn with all the joy and warmth of a fairy tale, and with little more than the bare essentials that a typical theater would have provided him.

Filming exclusively on a full replica of Stockholm’s famed Drottningholm Court Theatre, Bergman relies on a purely theatrical set design full of painted backdrops, rudimentary yet meticulously handmade felt costumes for various animals, and elaborate paper scrolls with lyrics written on them which occasionally pop up in front of the actors as they sing their lines directly to the camera. Such techniques help to bring a charming and amusing meta-textual layer to the film that pays homage to the stagecraft of opera and is part and parcel of a whimsical aesthetic that helps The Magic Flute unfold in storybook fashion.

Other self-aware touches are less successful, such as the periodic backstage scenes and the repeated cuts to close-ups of a young girl (Helene Friberg) who, eyes full of wonder as she gazes at the stage, functions as a kind of saccharine surrogate for Bergman himself, who was drawn to Mozart’s opera in his youth. But these superfluous intrusions are primarily mitigated by uniformly stunning renditions of Mozart’s music and an abundance of dynamic performances. And Bergman’s unique capacity for capturing the ebbs and flows of people’s inner states lends the characters and their travails a palpable emotional weight that nicely complements the droll comedic touches that dominate the film.

While the first half of The Magic Flute is as light-hearted as anything Bergman ever made, the second half plays a bit more to his strengths, allowing for more expressionistic flourishes in the cinematography and more direct conflict between the darker impulses hinted at early on. From the fiery dungeon where Monostatos and his minions intimidate and terrify Princess Pamina (Irma Urrila) after kidnapping her and Sarastro’s (Ulrik Cold) cult-like and red-clad brotherhood, to the Queen of the Night’s (Birgit Nordin) terrifying rendition of the song bearing her name, Bergman and Nykvist move toward a more complex lighting, staging, and blocking that’s more cinematic than operatic as the drama begins to crescendo.

Yet while the story’s more foreboding elements are more in line with Bergman’s traditional thematic concerns, such as the shifting power imbalances between men and women, it’s the increasingly absurd foibles of Pagageno (Håkån Hagegård), who’s tireless in his search for true love in the form of an imagined Papagena, that’s most lovingly rendered here. Playing out alongside the more prevalent rescue-adventure narrative, Pagageno’s undying quest reveals him as something of a Shakespearean fool whose dopiness is only that much more apparent when contrasted by the suave and handsome Prince Tamino (Josef Köstlinger), whom Papageno is tasked with accompanying to save Pamina.

With precise comic timing, Hagegård brilliantly captures Papageno in all his ungainly glory as he stumbles in and out of humorous and dangerous ordeals. But as aimless and clueless as Papageno often seems, Bergman sees him as a wounded yet pure soul worthy of compassion. “Love brings relief in pain and sorrow. It soothes a soul in misery,” Papageno sings toward the end of the film. And in a rare happy ending for Bergman, albeit one already written for him, The Magic Flute goes out on a sweet, touching note that sings of love transcending all.

Considering that the Criterion Collection’s 2000 DVD of The Magic Flute has often been deemed one of the distributor’s weaker image transfers, there was much room for improvement with this new release. And the 2K restoration the film on display here certainly delivers, boasting more well-balanced colors that bring a heretofore unseen richness to the costumes and backdrops. Skin tones have lost the orange hue of the earlier transfer and now appear more natural, and with a slight warmth to them, something that’s especially welcome given the film’s preponderance of close-ups. But the image still appears soft throughout, though that’s mostly noticeable in the wide shots. The sound, however, is practically flawless, with the uncompressed stereo track boasting effective channel separation that dynamically captures the beauty and raw power of the musical performances.

Tystnad! Tagning! Trollflöjten!, or Lights! Camera! The Magic Flute, is an hour-long behind-the-scenes feature made for Swedish television that provides a peek into everything from the various steps of the casting process to engineers and other craftsmen designing and constructing the replica stage upon which the film plays out. Certain snippets, like Bergman working with the orchestra or artists painting the elaborate backdrops featured in the film, are intriguing, but the documentary as a whole lacks focus. A 30-minute interview with Bergman, recorded just before the release of The Magic Flute, touches on many of the same topics already covered in Tystnad! Tagning! Trollflöjten!, though the director’s discussion of why he finds opera to be an essential, and still relevant, art form, coupled with his stories of his lifelong fascination with Mozart’s opera, sheds light into why he wanted to make this film. The interview with Bergman scholar Peter Cowie is regrettably the shortest of the three features, but his thoughts on Bergman and Nykvist’s aesthetic tactics are both detailed and insightful. The package is completed with a fold-out booklet with an essay by author Alexander Chee.

Criterion’s new release of Ingmar Bergman’s The Magic Flute is a vast improvement over the studio’s 2000 DVD, but don’t come to the show expecting a bounty of extras.