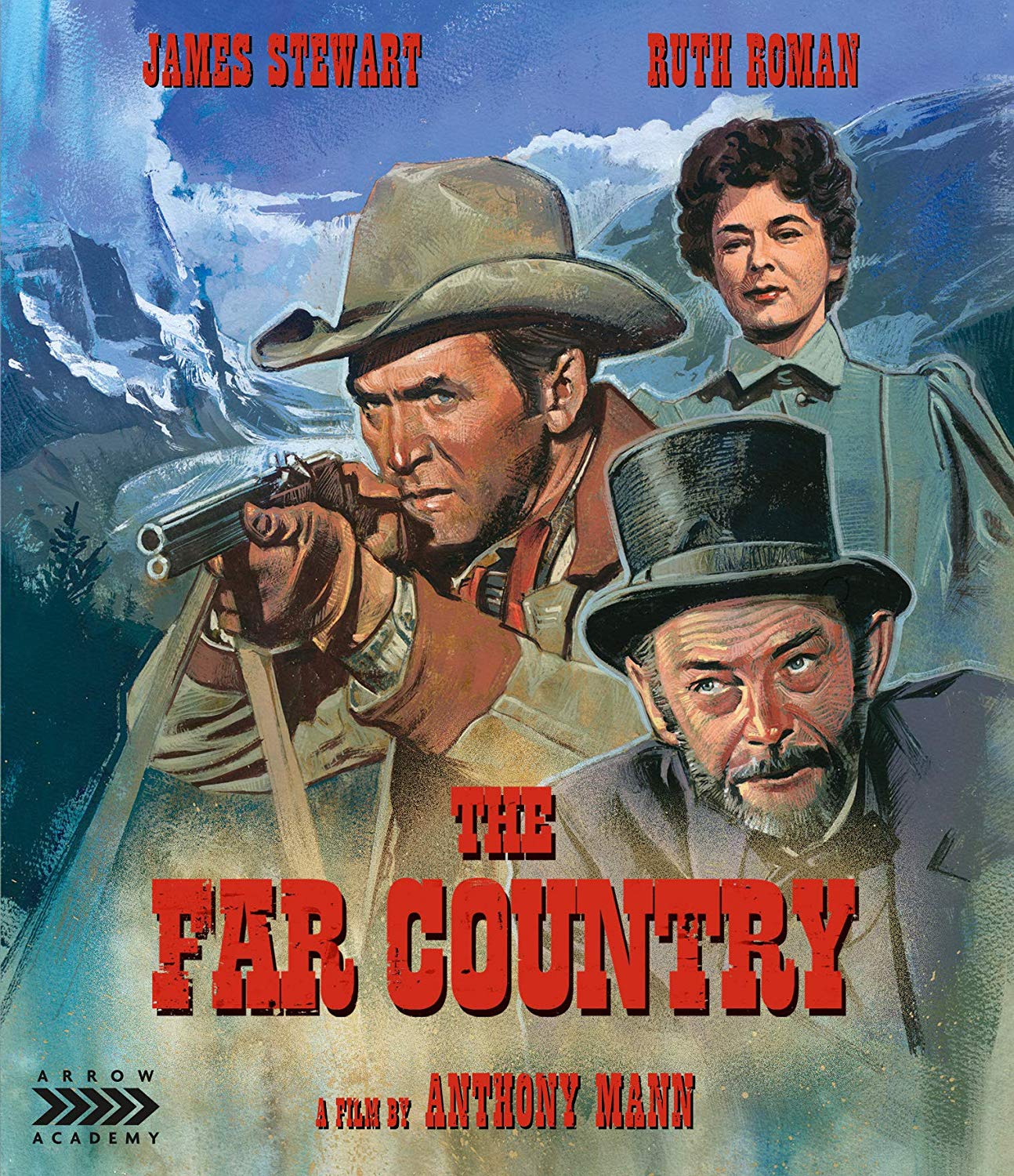 Anthony Mann’s 1955 Technicolor western The Far Country sees the great expanse of the Alaskan frontier as a confining tangle of mountains and rivers where the few survivable traverses all lead to the same measly outposts of civilization. Deeply suspicious of the myth of great pioneers taming wild land, the film finds Jeff Webster, an opportunistic adventurer played by James Stewart, hauling his plentiful Wyoming cattle up to the Canadian-American border only to see his get-rich-quick scheme thwarted at every turn by corrupt lawmen, malicious competitors, and various other mountainfolk who want to benefit in some way from the man’s bounty. But The Far Country isn’t a cynical film, as the ways in which it erects obstacles to its hero’s ambition have less to do with damning him to hubristic failure than to guiding him toward a more altruistic consciousness.

The westerns that Mann made with Stewart throughout the 1950s are well known for rubbing the luster from the movie star’s image. Even so, The Far Country is especially strident in exposing Stewart’s knack for playing callous types, at one point showing Jeff dangling the promise of meat in front of the needy community of Dawson City if only to swiftly, remorselessly redirect the provisions to a higher bidder. Intimations of Jeff’s combative edge are evident from the first scene, when, at a Seattle port, he’s forced to pay off a pair of cattle drivers who clearly want him dead for some unstated infraction from the trip, clarified moments later when the men cry out that there’s a murderer on board. Dodging authorities, Jeff finds his way to Skagway, immediately running afoul of the town sheriff, Gannon (John McIntire), who will be the thorn in his side through the remainder of his quest.

Jeff’s only friend is Ben Tatum, the kind of selfless, trusty old sidekick that only Walter Brennan could play. In The Far Country, the relationship between Jeff and Ben goes beyond platonic collaboration and touches on a veiled romanticism that’s unmistakable from their first exchange, when they compliment each others’ appearances and Jeff lovingly inserts a phallic pipe into Ben’s mouth. Throughout their northward adventure, as Jeff coolly rebuffs the advances of both a stylish Skagway heiress, Ronda (Ruth Roman), and a more tomboyish hanger-on, Renee (Corinne Calvet), Jeff and Ben’s one-on-ones act as tender refrains in a film otherwise dominated by brute one-upmanship and cold ambition. The pair share dreams of overseeing an idyllic Utah ranch when they strike it big, a fantasy of withdrawal that accounts for no further social life (and certainly no women).

Much as Mann embraces the warmth of the Jeff-Ben partnership, giving Stewart and Brennan plenty of room to show off their chemistry, Borden Chase’s screenplay ultimately deflates the Utah dream in favor of celebrating the power of community over selfish delusions of grandeur. When Ben’s crew reaches Dawson City, the open expanses of the film’s frames become shrunken by the margins of the town and its many inhabitants, who treat Ben alternately as a liberator and an agitator. The weathered faces of the townsfolks fill what was once majestic Alaskan negative space, and Jeff is left with a choice between amoral individualism and participation in society, an internal battle finally made physical in a shootout staged, in a neat directorial embellishment, underneath the stairs of the town hall. It’s a rousing, nearly hokey conclusion rendered fascinatingly ambivalent by Stewart’s pained parting gesture, reaching vainly for a totem of his departed Ben as the survivors surround him in triumph.

For such an overtly picturesque film, Arrow Video’s transfer here leaves a bit to be desired. Ostensibly generated from “original film elements,” the image lacks the relative sharpness that one today expects from 4K transfers of films from the 1950s, and suffers especially during cross dissolves, where the resolution appears to temporarily downscale. Despite the Technicolor origins, the film’s color palette is muted as well, though it’s hard to say if this is reflective of an issue in digital conversion or in the quality of the surviving source material. Fortunately, the problems in visual clarity don’t carry over to the soundtrack, as there’s a pleasant consistency and balance between dialogue and score.

It’s always a treat to process the close readings of Adrian Martin, one of our finest critics and an Anthony Mann specialist to boot. Martin provides an astute commentary here, which stands as the strongest extra on a disc that also gives us a pedestrian talking-head overview from critic Kim Newman and a slightly longer documentary on Mann’s tenure at Universal. Like the liner notes by Philip Kemp, the latter offers compelling context about Mann’s career, but it’s Martin’s assessment of the director’s evolving use of landscape and compositional space throughout the film that really shines.

Anthony Mann goes northward and skewers the myth of western pioneering in The Far Country, now out in an underwhelming package from Arrow Academy.

Review: Pedro Almodóvar’s All About My Mother on Criterion Blu-ray