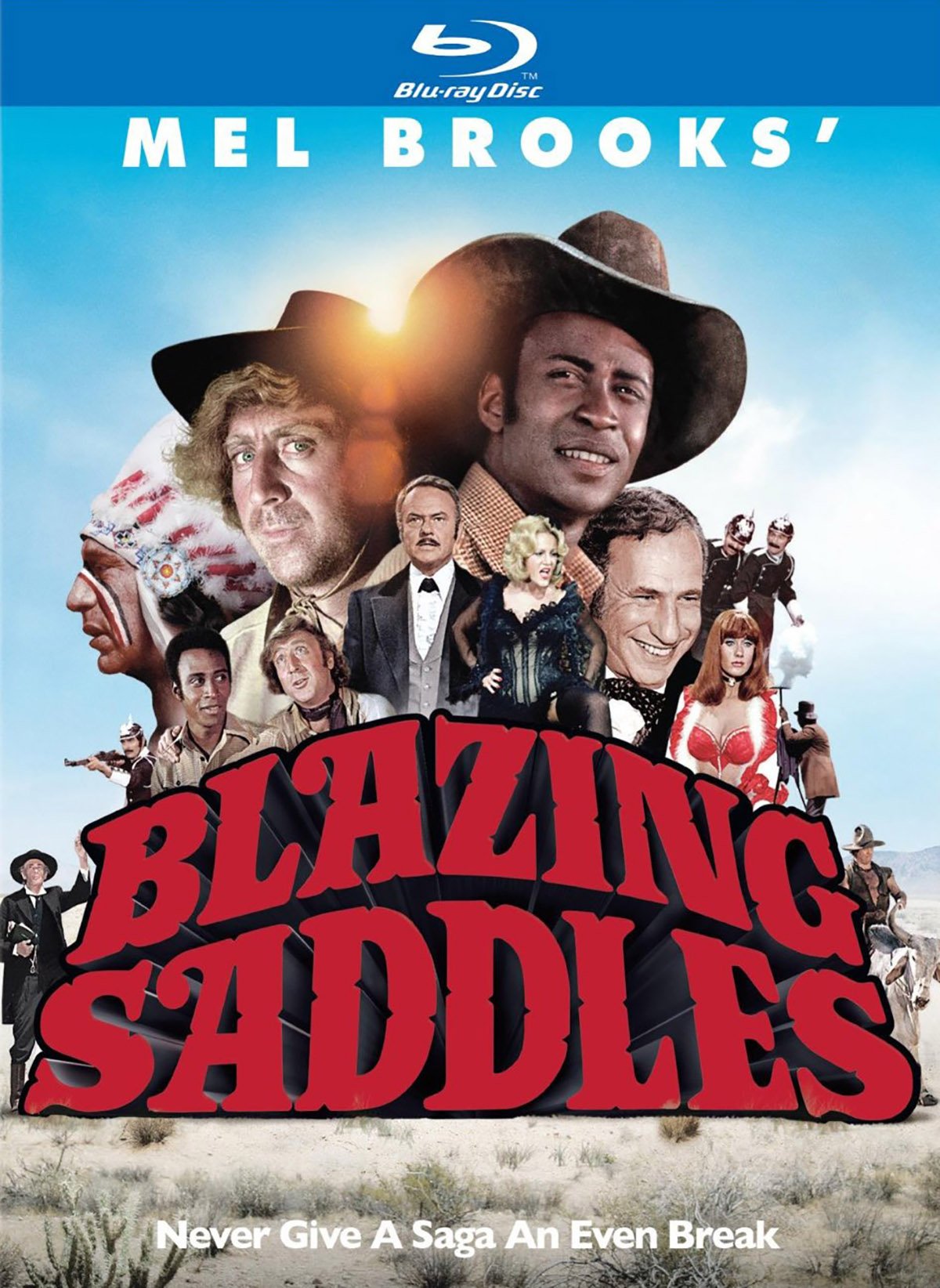 Like all great comedy, Blazing Saddles is beholden to the truth, and exposing it, and in this farcical western’s sights lies everything from the genocide in America’s history so often ignored by classic genre fare to the simple fact that cowboys eating beans around a campfire will eventually break glorious wind. Forty years after Mel Brooks’s box-office smash struck a nerve with audiences, it remains a high-water mark for cinematic hilarity, even if time and influence have inevitably dulled some of its shock value. What stands out now, more so than its calculated taboo-breaking and button-pushing, is its self-reflexivity. The deliberate overloading of wildly anachronistic details, frankly racist and sexist behavior, cartoon violence, and straight-faced absurdity is perpetually disarming, and it’s not for nothing that the film culminates with its own characters showing up at Hollywood’s Grauman’s Chinese Theatre, where Blazing Saddles is the main attraction.

The everything-and-the-kitchen-sink approach is as much an act of comedic anarchy as a democratic acknowledgement of the importance of community, both within and outside of the cinema. Few films have been so aware of themselves and the audience; fewer still have employed that awareness in the name of social progress while reducing people of all ages and background to tears of laughter in the process. The film’s plot—in which a black railroad worker, Bart (Cleavon Little), finds himself appointed the mayor of an isolated western town, Rock Ridge, circa 1874—is an effectively simple joke writ large, and one that now seems oddly prescient in a world where a black man is president. Part of a larger backroom scheme by politico Hedley Lamarr (Harvey Korman), Bart’s inauguration is met with dropped jaws and drawn guns before the townsfolk (lovingly, if aptly, described as “morons”), their backs up against the proverbial wall, are forced to see the error of their bigoted ways.

Here, Brooks’s screwballism suggests a manifesto—if not from the opening theme song (performed with biting sincerity by Frankie Laine, who didn’t know the film was satire), then certainly the moment Bart waddles away from a ticking bomb to the Looney Tunes symphony “That’s all, folks!” cue. Even as it rolls around in juvenilia like a hog in the mud, Blazing Saddles treats the audience with enough intelligence to always be in on the joke, and to ultimately make the jump between the figurative and the literal breaking of the fourth wall. The film’s ultimate obviousness and cinematic simplicity render this ultimate spectacle even more subversive; in its broad appeal and quotidian roughness, the film more effectively pulls the rug out from those who take it for granted, and anyone who criticizes the undecorated cinematography has to be deliberately overlooking Joseph Biroc’s careful framing and occasionally astonishing use of focus.

Despite the film’s all-inclusive, jovial tone, there remains an underlying anger at the dregs of society, and one befitting the larger social ills at its roots. What at first seems to be a mere sight gag proves a devastating criticism of the rabble-roused masses, as the cattle first seen mingling with cowboys in the town saloon later show up at the town hall meeting and, later, at the movies themselves. Blazing Saddles ultimately strikes a pointed note of necessary ambivalence; above all, the catharsis of shared laughter is the means and the end. The villain may be dispatched, but more surely wait ahead, and any supposed conclusion imposed on the battles fought in the film—over greed, corruption, and hate—would be aptly responded to with the townsfolks’ unanimous parting words to Sheriff Bart: “Bullshit!” Such frankness is liberating, and certainly no less important than the heartbreaking drama of more outwardly serious fare like 12 Years a Slave.

In stoking the fires of social change, Brooks knowingly complicates his own membership with the white majority, playing both the childlike governor under whose authority the plot unfolds, and also, in a flashback, a Sioux chief, whose Yiddish tongue is no less accurate than the dribble peddled by Hollywood’s offensive Native American representations until that point (Quentin Tarantino would echo these choices to sublime effect, literally blowing himself up in the similarly themed Django Unchained). Blazing Saddles’s capacity to elicit laughter, and to offend, continuously bends toward historical frankness (e.g., the use of hate language and tossed-off references to rape), but in its unyielding upending of expectations it finds a truth in the eye of the storm: We’re all in this together, sinner and saint, man and woman, pawns and bishops alike. Watching any 10 minutes of mainstream news programming is enough to convince one that the film is still ahead of our time.

The image is a Technicolor dream, with sharp details and an excellent balance of colors and grain. The 5.1 DTS-HD Master Audio track isn’t quite as impressive (likely because it expands on the film’s original mono recording, absent here), but it avoids the artificiality that often accompanies such remixes, and the trade-off between dialogue and sound effects is slim to none. Overall, it sounds impressive, even when the film doesn’t (much as I love the film, I’ve never been able to warm up to Madeline Kahn’s big number).

The majority of this disc’s features are held over from the previous Blu-ray release, though a newly made featurette, “Blaze of Glory: Mel Brooks’ Wild, Wild West,” is an edifying half-hour retrospective that may be worth the double-dip for the film’s diehard fans. Vintage features include the behind-the-scenes “Back in the Saddle,” deleted and alternate scenes (some frequently used in television airings of the film), the original theatrical trailer, and a commentary by Mel Brooks that runs for about 50 minutes of the feature; an additional curiosity is the 1975 pilot episode of the film’s proposed television spinoff, Black Bart. Also included is a set of 10 collectible lobby cards.

A great transfer of one of cinema’s great populist cherry bombs, this 40th-anniversary package is reason enough to add Mel Brooks’s classic to your collection, if you haven’t already.

Review: The Gender-Flipped Company Is an Imperfect but Loving Toast to a Classic