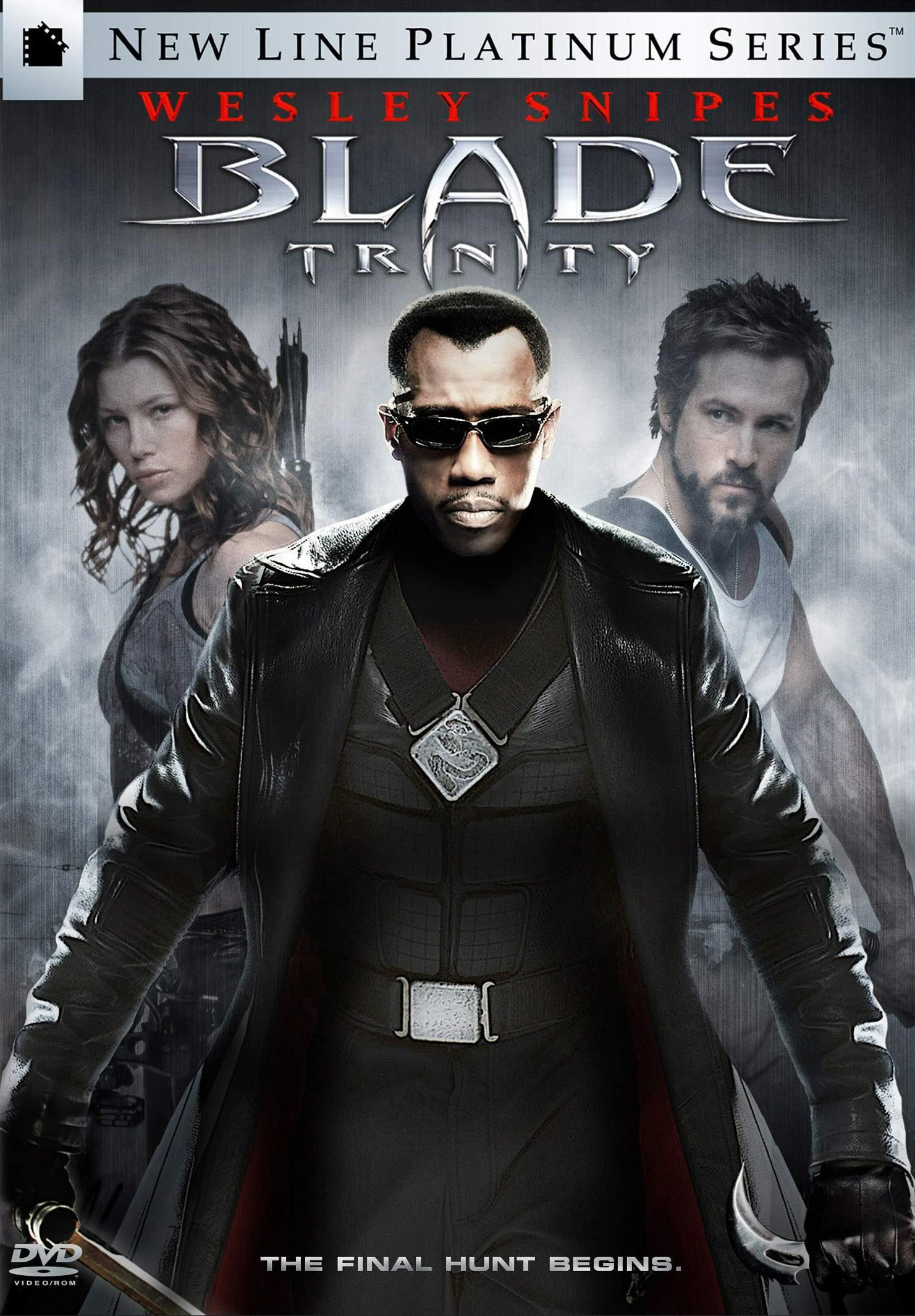 Having penned the first two entertainingly action-packed Blade films, screenwriter David S. Goyer would have seemed the logical choice to helm the series’s third and supposedly final (yeah, right) installment. Blade: Trinity, however, is proof positive that writing a successful action film and directing one are two entirely different beasts.

In his directorial debut, Goyer flounders around like an indecisive movie buff desperate to indulge in every special effects-laden trick in the Directing 101 handbook while paying no attention to atmosphere, pacing, or visual cohesiveness. If he’s not shooting his fashion model-esque Dracula (Dominic Purcell) in front of cheesy time-lapse photography backgrounds, he’s blandly recycling the image of heroes walking shoulder-to-shoulder toward the camera in slow-motion or of the half-man, half-vampire Blade (Wesley Snipes) offing hordes of faceless combatants in frantically edited martial arts melees. Midway through the film, hunky former vampire Hannibal King (Ryan Reynolds) is seen watching the cult classic Incubus on TV, and it’s an unintentionally apt reference considering that Goyer’s grasp of directorial fundamentals is about as strong as William Shatner’s fluency in Esperanto.

Blade: Trinity saddles the heroic daywalker with two vampire-hunting cubs (Reynolds’s Hannibal and Jessica Biel’s Abigail, the daughter of Kris Kristofferson’s gearhead Whistler) and their presence regularly pushes Blade to the story’s periphery. Yet since Reynolds’s incessantly sarcastic Hannibal is the film’s only entity with a pulse—and given that Snipes’s trademark stoicism seems more like boredom—it’s easy to overlook the fact that these new characters’ inclusion is likely just a test-run for their forthcoming spin-off adventure.

Less forgivable is Parker Posey’s vampiress (whose most notable character traits are her abundant eye shadow and stilettos) and Purcell’s Dracula, both of whom encumber the film with a full-throated campiness that diffuses any stabs at suspense. Meanwhile, the director’s shameless plugging of the iPod as the ideal way to enjoy trip-hop while slaying bloodsuckers is just plain embarrassing. That Goyer then decides to pepper this pulpy diversion with a schizophrenic political subtext—Blade refers to the current president with an expletive and uses biological warfare to defeat his undead enemies, while the resting place for Dracula’s centuries-long hibernation is identified (I kid you not) as Iraq—only further solidifies the impression that it’s time to drive a stake into this franchise’s withered heart.

Three years ago, New Line Home Entertainment’s Blade II DVD set the gold standard in terms of image and sound quality for every release that came out in its wake, at least for any Hollywood release where the action takes place almost entirely at night. This is a standard the 2-disc Blade: Trinity DVD-which includes the original version of the film and an unrated version that runs 10 minutes longer-doesn’t exactly meet, at least not in the image department. For sure, Blade: Trinity looks good, but compared to New Line’s Blade and Blade II discs, its quality becomes negligible: haloing is visible from time to time and shadow delineation is merely adequate, which is unfortunate considering there’s very little sun in the film. As for the dark and cloudy sky over the city, “film-like” is not a word I’d use to describe it. Luckily, the Dolby Digital 5.1 EX surround track and 6.1 DTS track deliver the goods, and then some.

Technically, Blade: Trinity is not as impressive-looking as its predecessors, which means the techie commentary track with David S. Goyer, producers Peter Frankfurt and Lynn Harris, cameraman Gabriel Beristain, production designer Chris Gorak, and editor Howard E. Smith simply can’t hold a candle to the second track Goyer shares with Ryan Reynolds and Jessica Biel. The trio has a blast from beginning to end, with plenty of ridiculous anecdotes and crass impromptu comedy shticks to spare. Props to them for loving Parker Posey’s performance in the film as much as the rest of us. Kicking off the second disc is the 16-part “Daywalkers, Nightstalkers & Familiars: Inside the World of Blade: Trinity,” which runs almost two hours and covers almost every single aspect of the film’s production from pre to post, including the percentage of Reynolds and Biel’s body fat. Rounding things off: a corny “Goyer on Goyer” interview, the alternate “werewolf” ending (I want the leather jacket Reynolds wears in this scene), a blooper reel (only funny when Posey and Reynolds are on the screen), two galleries, and all sorts of teasers and trailers.

Strictly for cock-juggling thundercunts and the people who love them.