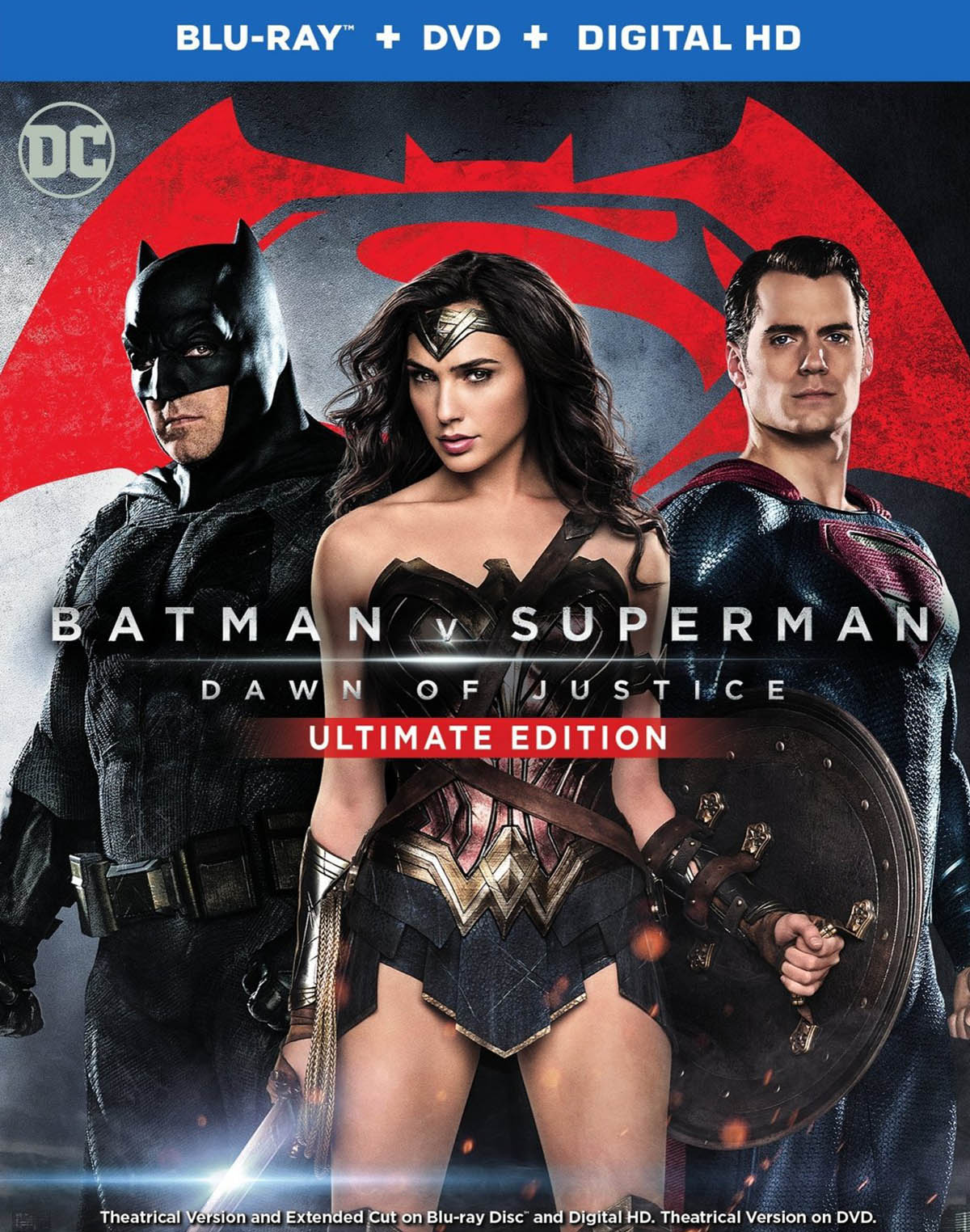 Director Zack Snyder’s Batman v Superman: Dawn of Justice is an overstuffed sketchbook of ideas for a half-dozen potentially striking superhero adventures. Snyder blends two famous comics, The Dark Knight Returns and The Death of Superman, together with a convoluted geopolitical narrative that’s borrowed from Christopher Nolan’s Batman films. One can feel Snyder aiming for an obsessive masterpiece while attempting to please investors with the expository generality that’s required of global blockbusters. The film wants to be a treatise on How We Live, dabbling in incredible religious iconography and glancing infrastructural signifiers, yet it can’t commit to any specific view for fear of alienating consumers.

Snyder weds astonishing formality with a plot that’s so feeble and uninvolving it nearly renders the effort contextually ludicrous and beside the point. It takes the filmmaker almost 90 minutes, for instance, to establish that Lex Luthor (Jesse Eisenberg) has obtained kryptonite for which to kill Superman (Henry Cavill). The film is called Batman v Superman, yet the inciting incident for the central rivalry makes no sense, having something to do with Batman’s (Ben Affleck) jealousy over Superman’s godlike powers and Luthor’s intricately facile efforts to manipulate them against one another.

Luthor’s motivation equates to rote master villainy, the usual desire to end the world, but Snyder is too self-conscious to resort to providing so simple an explanation, so we get no motivation instead, apart from the fact that Luthor needs Batman to kill Superman in order to discredit both heroes for some reason. Snyder isn’t compelled to ask why Luthor should care about them one way or the other, where a more sophisticated film might’ve implied that ostentatious heroism could distract the populace from Luthor’s duller and more insidiously damaging corporate antics. Luthor’s eventually revealed to be capable of using a fallen Kryptonian warship as a kind of interdimensional easy-bake oven, whipping up a forgettable CGI-rendered monster on demand that he sends to kill both heroes anyway. In other words, Luthor’s elaborate conspiracy to pit Batman against Superman is pointless, and cluttered up with characters and locations that add nothing to the film.

Batman v Superman comprises self-contained moments and gestures, some of which are impressive in their own right, but which fail to cumulatively breathe. It offers an apologia for the massive collateral damage that marked Man of Steel’s climax while reveling in more damage, resulting in more of the thematic hemming and hawing that belabored Nolan’s comparatively elegant Batman films. Every few minutes a character utters a bon mot that’s meant to impress on us the film’s depth and relevance to a culture racked by terrorism and a dangerous distrust and resentment of the populace toward governmental authority. After nearly two hours of this busy-ness, one wonders why we still haven’t gotten to see Batman fight Superman.

In his Dark Knight Returns comic, author Frank Miller posited Superman as a shill of President Reagan, a naïve boy scout helping the leader to destroy his global enemies. Batman resented this, but for the wrong reasons, as he’s his own man, defiantly, egocentrically resistant to patriotic pretense. Miller was bracingly unsentimental in offering these observations, and his cynical interrogation of superhero tropes are still copied 30 years after the book’s initial publication; yet he also reveled in the icons’ power, in the visceral purity of fascism. Snyder is interested in political resonance, but not that interested. Superman is criticized in Batman v Superman for his actions in Man of Steel, but the backlash against him doesn’t scan because he was defending the planet against an alien invader who could’ve wrought far more damage. Snyder doesn’t have the daring to paint Superman as a proactive assassin, a la Miller.

Admittedly, this pragmatism isn’t shared by critics of Man of Steel, who thought that a hero should take a moment, perhaps, to fly his antagonist over to a deserted island. And this pragmatism does parallel the dangerous rationale indulged by, say, police officers who claim that excessive force was the only viable option in an altercation despite documented evidence to the contrary. But this kind of cultural detritus remains undigested by Snyder. He’s throwing stuff against a canvas to see what sticks, and one wishes he’d decide on a few elements and move on. Snyder’s half-heartedly transferred the backlash that he’s personally weathered as an artist onto his character, but this reaction feels defensive and futile, partially because Superman is easily the most sympathetic character in Batman v Superman, played by Cavill with a poignant aura of vulnerability. A potential irony, that the nicest guy is the most insidious monster, is accidentally broached at best.

On the other hand, Affleck’s Batman is an unambiguous sociopath, branding and killing criminals with aplomb, suffering from hallucinations, turning on Superman out of nearly homoerotic resentment. And yet he’s subjected to much less scrutiny than Superman, presumably because Batman films tend to make more money than Superman films, and because Batman is generally seen by our culture as the hipper character. The sadism of this Batman is initially striking and borrowed directly from Miller, and Snyder has Miller’s flair for visceral fascism, but the director has too many other films to set up, and so he can’t commit to this idea either. By franchise demand, Batman must become a good guy so he can lead a future Justice League, despite committing actions that are unforgiveable in a theoretically democratic society. In Miller’s book, this irony and hypocrisy were intentionally achieved and sustained, though for Snyder these are passing whims.

As much of a shambles as Batman v Superman is, though, it has a visionary intensity that shames most blockbusters, including most interchangeably televisual Marvel films. Our first glimpse of Batman, hanging from a slum ceiling like a monster, is the scariest image of the character committed to film. More operatic is Batman’s central hallucination of a city gripped by apocalypse, swarmed by creatures that resemble a cross between gargoyles and mosquitos. The images are generally informed with epic weight, tactility, and even spiritual grandeur, suggesting grand motion tapestries, splashed with violent colors that occasionally suggest the art of Goya. There’s probably a good movie buried somewhere in this production, something with the sustained poetry of Snyder’s woefully unappreciated Sucker Punch. If the film weren’t so punishingly scattered and indulgent, its narrative incoherence might’ve served the subjective, free-associatively neurotic effect that Snyder courts and sporadically achieves.

This transfer sharpens the image from the film’s appearance in the theater, allowing the big set pieces to pop, such as the opening reprise of Man of Steel’s climax. Shards of fiery explosions are so clean and precisely rendered they achieve a three-dimensional effect that’s more persuasive than the actual 3D offered in theaters. Colors are deep and robust, accentuating the richly imagined palettes, such as the sculptural glass rooms of a mansion, or the brooding earthy tones of expensive suits favored by Batman when he’s operating as Bruce Wayne. The various soundtracks are big, full, and bass-centric, as one expects of an expensive blockbuster, though balanced with subtle effects, particularly the various sounds of the gadgets favored by Batman. Superman’s graceful launch into the sky from the ground is memorably mixed to suggest a fusion of a plane flying and a bullet firing. A gorgeous, top-tier presentation.

Most notably, there’s an R-rated director’s cut of Batman v Superman that runs 30 minutes longer than the original film. The restored footage includes a throwaway part for actress Jena Malone, and explains Lois Lane’s subplot with a bit more clarity. Most striking, however, is just how little difference these extra scenes make on the production as a whole, apart from drawing out something that was already overlong. The featurettes collectively run about two hours, offering the audience the histories of the various comic books that inspired the film, as well as covering various facets of the production, such as character motivation, casting, costume design, and fight choreography. The supplements are puffy and geared toward advertising future DC Comics films, but feature enthusiastic interviews with all the principals and occasionally detailed behind-the-scenes footage. An inessential but enjoyable package.