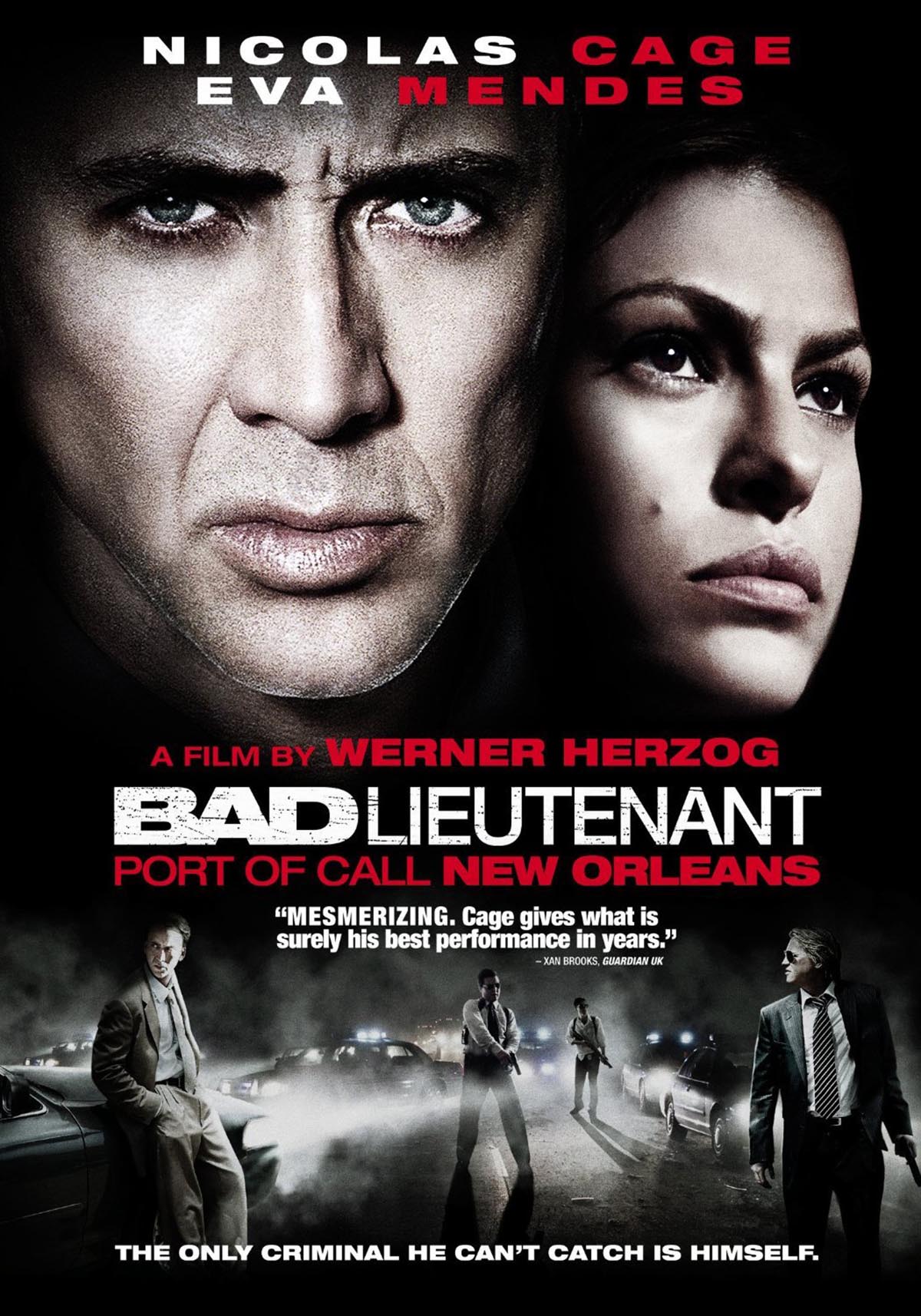 Werner Herzog’s Bad Lieutenant: Port of Call New Orleans: the German auteur’s first American-set fictional feature since Stroszek, the canniest use in recent memory of Nicolas Cage’s bruise-purple twitchiness, and, pound by pound, arguably the year’s funniest film. What it isn’t, despite its cumbersome title and narrative similarities, is a remake of Abel Ferrara’s scummy 1992 masterpiece. Where Ferrara saw New York City as a vortex of rampant sin and elusive redemption, Herzog envisions Katrina-ravaged New Orleans as a grayish playpen of unbridled animal instincts, from the introductory glimpse of a snake slithering over greasy, black water to the aquarium-framed closing image. Both cities are visions of hell on Earth, yet there’s an unruly giddiness to Herzog’s film that’s the opposite of the original’s somber tone of Catholic guilt: A swamp of palpable rot, his Gomorrah is also a sulfuric funhouse.

Reptiles abound in POCNO. The camera scuttles by the side of the road to seize an alligator’s view of a car crash, and later watches in close-up as a couple of iguanas seem to break into a Big Easy aria. When it comes to galvanic creatures, however, none of them can compete with Cage’s Terence McDonagh. As the dope-snorting, high-gambling, granny-terrorizing titular lieutenant, Cage delivers a deranged high-wire act that’s unmistakably part of the director’s singular world even as it spills over the edges of that world. Filching narcotics from the evidence shelf, running astronomical debts with bookies, and cackling at his own jests, McDonagh grows into such a lurching, crooked-backed Nosferatu over the course of the picture that even seasoned weirdoes like Brad Dourif, Michael Shannon, and Fairuza Balk step out of his way. And yet there are moments of disconcerting lyricism, as when, in the midst of shootings, drug deals, and acid hallucinations, McDonagh takes his hooker girlfriend (Eva Mendes) on a nostalgic tour of his childhood hideout.

With its mysterious details (a haiku-like ode to fish found at a murdered immigrant family’s home) and wacky visions (a dead man’s soul goes into break-dancing limbo), nobody is likely to mistake POCNO for a work-for-hire project. Even more than in Rescue Dawn, Herzog delights in setting up conventional genre scenarios and then gleefully punching holes through them—and the hackneyed screenplay by cop-show veteran William M. Finkelstein gives him plenty of material to punch through, including the most deliberately spurious “happy” final stretch since The Last Laugh. For all its frenetic dark humor, this dizzying fever of a thriller is never a nihilistic work. It may not have the wounding thrust of Ferrara’s Bad Lieutenant, but it shares with that film a bottomless compassion for its crazies, to say nothing of the exhilaration of seeing a fearless director and a fearless actor pushing each other beyond extremes.

The sound is solid if mixed a little low, but the video, like Nic Cage’s character, constantly flirts with disaster: Interior daylight scenes look almost smashing, but combing is abundant during most exteriors, and shadow delineation is poor, with shadows appearing pixilated throughout, most embarrassingly in the opening scene of McDonagh and his partner pulling nudie pictures out of a prison locker.

A theatrical trailer, a digital photography book (photos by Lena Herzog), and a making-of featurette notable for a few WTF exclamations by Werner Herzog and the sight of the director clapping his own slate. During the filming of the police award ceremony, Herzog reveals to the crowd that it’s uncommon for a filmmaker to clap his own slate, but he likes to be the last thing actors see between themselves and the camera.

This is minor Herzog, but Cage’s performance is some kind of tour de force. Keep both men away from your grandma.

DVD Review: Ralph Bakshi’s The Lord of the Rings on Warner Home Video