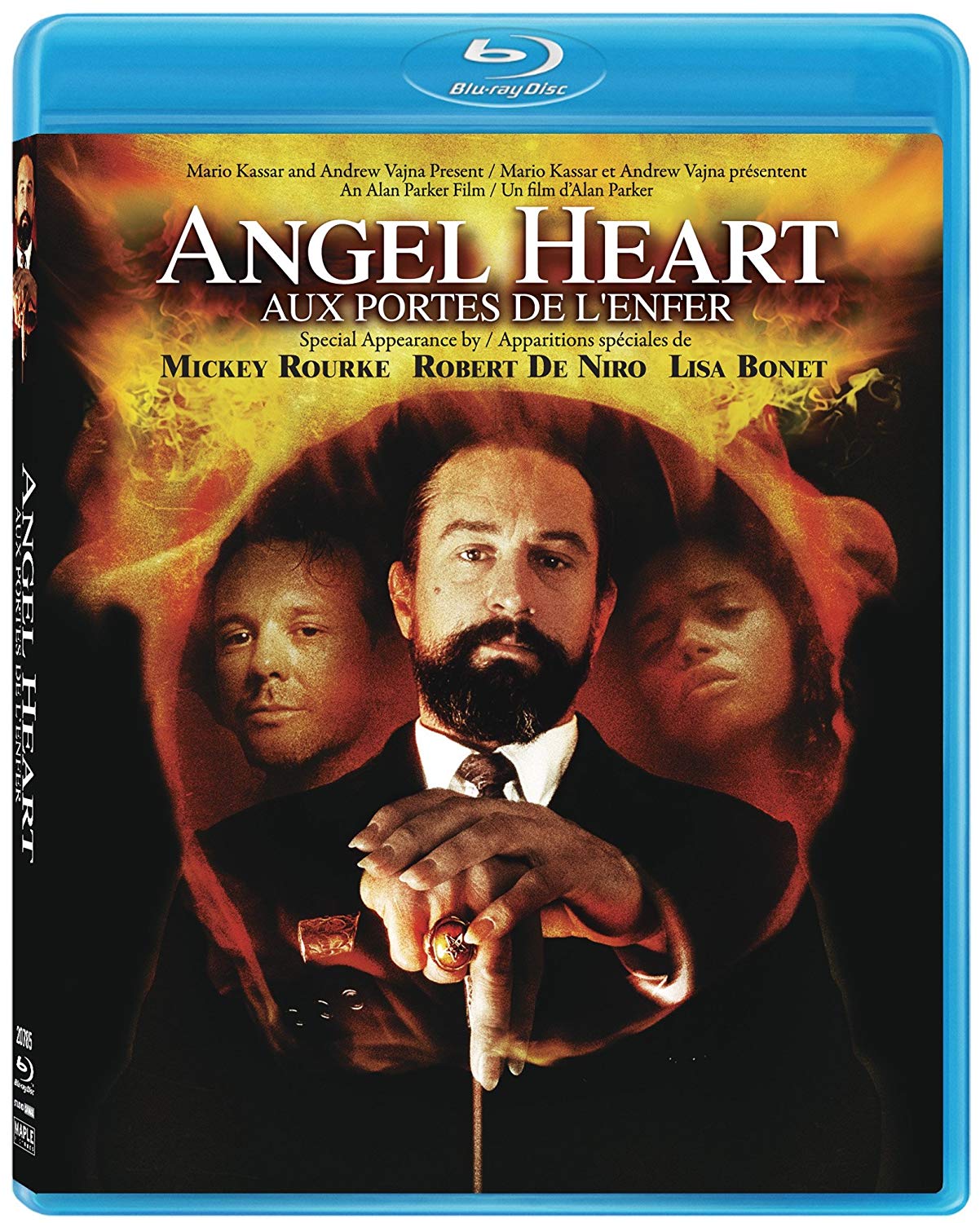 One can’t help but feel there’s a competent, gallows humor-infused thriller buried somewhere beneath the camp affectations of Alan Parker’s Angel Heart, even if one lacks the will power or desire to persuasively excavate it. The termitic meat of this Faustian exercise sits trapped under multiple, calcified layers of narrative and visual inanity: grubbily ostentatious foreshadowing, ham-fisted private dick-isms that would crinkle Mickey Spillane’s nose, roly-poly Su-thun-ah stereotypes, queasily curdled sexuality, highly unlikely deaths-by-gumbo cauldron, and purple voodoo orgies that make Nick Roeg’s equally flawed Eureka seem well-informed by comparison. From the masterfully shot but grimly artificial seediness of the New York opening to the flagrantly “What a tweest!” letdown of a demonic denouement, there isn’t a single believable or resonant moment in the entire film; even the highly celebrated, jagged-milieu “atmosphere” is more professional than evocative.

Still, metaphysical and emotional anemia is an important tradition in cult horror/mystery, a category the daffy plot twists and crimson, incestuous excesses of Angel Heart sit quite cozily in. Most thrillers that exude a frightening nihilism do so by maintaining a merciless indifference to the humanity of their characters; Angel Heart takes this one step further by instilling within its cast a blasé inclination toward self-destruction. The detached, smart-ass behavior of Mickey Rourke’s Harry Angel, aided magnificently by the actor’s phoned-in performance, is an effective metaphor for the protagonist’s circuitous cherchez l’homme assignment, as well as Rourke’s subsequent, dead-end career: He’s a lifeless, sedentary shell of a man, bitterly self-loathing whenever falling back on his ignorance-defending “I’m from Brooklyn!” mantra, and perfectly displaying the lack of self-awareness one would anticipate from a shell-shocked kid who’s had his heart cannibalized by some dark spiritualists. The scenes between Rourke and Robert De Niro’s Beelzebub avatar Louis Cypher (the noting of which is no more of a spoiler than Cypher’s effetely sinister mannerisms or pewter pentangle jewelry) are creepily perfunctory: Neither of them bothers to act, so the enveloping emblems of Satanist iconography appear unsettlingly casual.

It’s unlikely that a mystery film will again attempt to mesh the distinct debaucheries of New York and New Orleans after the infamous failure of Angel Heart, which is unfortunate; the explicit hocus pocus of pseudo-voodoo could use some wise-guy shrewdness to coax out its more subtle flavors. What drags this film to hell isn’t the mis-mixing of genres, but the insistence on hammer-to-the-anvil suspense buffoonery (which Parker soon after swapped for blatant political buffoonery). The walls bleed when Harry unknowingly fucks his daughter (Lisa Bonet playing “bad”) and the heavy-set Louisiana cops playfully stretch their suspenders when he later puts a pistol “up her snatch” (to borrow the officer’s parlance); it would all be laughable if the evil deeds and premature deaths and withered witch doctor hands led us to more than the protagonist’s unnecessarily messy self-discovery. As it is, it’s mostly just gratingly pointless.

Michael Seresin’s cinematography may not be in the service of much, but the 1080p transfer confirms its accomplishment. The Blu-ray is a fairly significant improvement over the earlier Special Edition DVD despite some mastering glitches (the overcast Coney Island beach scene gets a bit grainy): The blacks are noticeably deeper and more ominous (that is, the contrast levels and not the caricatures of African-American wickedness), the bloods are brighter and more viscous, and the mugginess of the New Orleans bayou is thick enough to dampen one’s clothing. Most of Alan Parker’s films are visually assured, but Angel Heart might be his best-looking project to date (with the possible exception of Birdy, which Seresin also shot). The booming 5.1 audio is mixed a trifle hot in places (requiring remote control fiddling), but Trevor Jones’s syrupy saxophone score sounds aptly feverish throughout.

Most (but not all) of the extras from the Special Edition DVD have been carried over, though none are in HD. There’s a commentary with Alan Parker wherein he mostly talks about how strange it is to be watching and discussing his own film, and a hilarious non-interview with Mickey Rourke that underscores just how little he cared about the Angel Heart gig (he either can’t remember or won’t comment on any production specifics or preparations he underwent for the role). The ultra-sharp menus are pretty neat though.

Watching a hirsute, long-nailed Robert De Niro daintily peel and unceremoniously scarf down a hard-boiled egg in high definition is more than worth the SRP.

DVD Review: The Golden Age of Television on the Criterion Collection