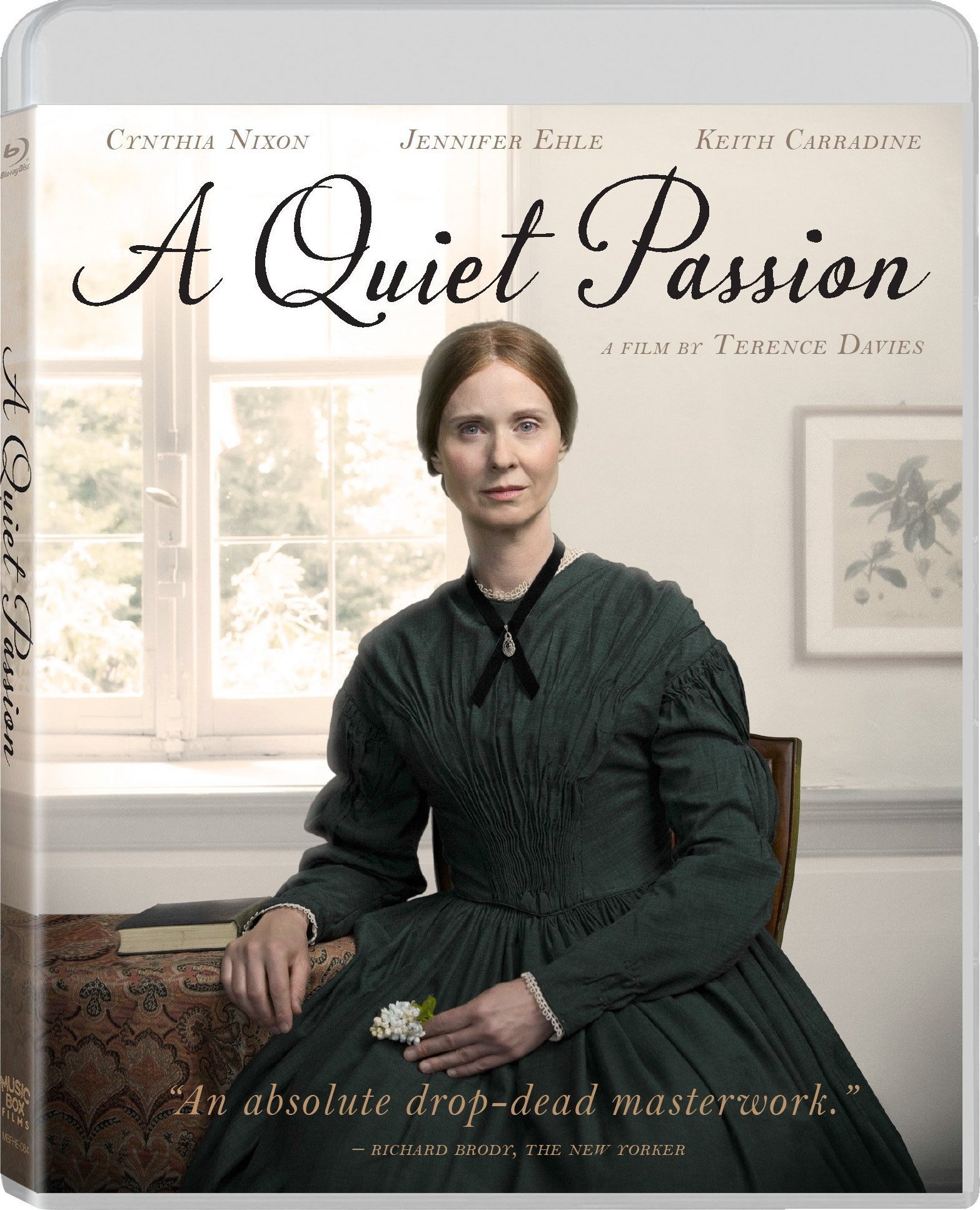 Timeliness and contemporary relevance are such powerful influencers in the production of biopics that it’s rare to come across a specimen of the genre that fully respects the particulars of its era without indulging the temptation to editorialize from the vantage of modern-day frames of reference. Terence Davies’s A Quiet Passion is one such rarity, refusing to over-account for the sensitivities or attention spans of today’s audiences in treating Emily Dickinson as a living, breathing human inextricable from her everyday reality. Dickinson may have been a proto-feminist, but the film is hardly a resurrection of the 19th-century poet as an icon of social justice—surely one market-friendly direction this project could have taken—but rather a hard look at the contours of her sequestered social universe, and how those sometimes limiting parameters nevertheless fueled her work.

The first and most conspicuous sign of A Quiet Passion’s historical specificity is the supreme headiness and eloquence of its dialogue, which comes at a rapid clip and with almost wall-to-wall frequency. More than a mere place of residence and relaxation, the Dickinson homestead in Amherst, Massachusetts—the actual preserved site of which was provided to Davies for the film’s few exteriors—serves as an arena for around-the-clock banter on such matters as the nature and limits of Christian piety, the literature and art of the day, local gossip, and general discourses around the question of how to lead a dignified life. Recorded with such heightened clarity as to almost sound dubbed, these dense conversations have a distancing quality comparable to that of Whit Stillman’s Love & Friendship, but the linguistic information moves too swiftly to allow time for comedic upshot. Instead, the discussions generally begin as nourishing meetings of the mind, transform into indignant sparring sessions, and resolve as apologetic declarations of mutual respect—each a microcosmic demonstration of Davies’s refined feel for human drama.

Executing these daunting reams of screenplay with rhythmic dexterity is Davies’s terrific ensemble, which is led by a gaunt Cynthia Nixon as Emily. Costumed in a succession of forbidding dresses and with her hair tightly wound in a bun, the actress exudes an air of remoteness and melancholy that registers in her eyes even when delivering spirited monologues. Her co-star, Jennifer Ehle, affects a comparatively sunny disposition as Emily’s beloved sister, Vinnie, while the other women that orbit the sisters’ narrow sphere—socialite acquaintances like the demure Susan Gilbert (Jodhi May) and the fiercely liberated Vryling Buffam (Catherine Bailey)—all possess a certain yearning to be liked that Emily is decidedly not preoccupied with. Whether speechifying to an affable male visitor (Stefan Menaul), a prickly aunt (Annette Badland), or her own father (Keith Carradine, playing a kinder lad than the typical Davies patriarch), Emily isn’t one to self-censor, and she’s quick to ruffle feathers with idiosyncratic thoughts verging on slanderous impropriety.

Throughout, Emily is never less than wholly consumed by matters of morality and decorum, and within all the script’s chatter lies an uncompromising exploration of the niceties of the English language as a reflection of personal values. A common rhetorical swerve within the Dickinson family dialogues is to veer from the specific to the abstract, stalling the relay of anecdotes to dwell on their deeper implications. This often leads to nitpicky arguments around the differences between, for instance, surrender and practicality, clarity and obviousness, or confidence and narcissism. Emily, in particular, is hypersensitive to the point when truisms become cliché, when one emotion is mistaken for another, and when double standards along gender lines are unthinkingly perpetrated. In placing such prolonged emphasis on this semantic minutia, Davies elucidates how the rigor Emily practiced in daily conversation extended naturally to her poetry—excerpts of which are voluptuously recited by Nixon in voiceover interludes.

It’s true that all this talk creates an uncharacteristically stagy framework for Davies, whose films are best known for their lyrical assemblages of dreamlike imagery set to snatches of romantic music, but it can’t be said that the director is ill-suited to the material. The austere texture of Emily’s existence is admittedly far from that of a protagonist like The Long Day Closes’s Bud, a boy wrapped up in the joys of cinema and song, but the only forms of entertainment available to the Dickinsons in rural Massachusetts before and after the Civil War were newspapers, Charlotte Brontë novels if they were lucky enough to get ahold of them, and one another’s company. As such, Davies keeps his camera trained on his actors and only occasionally strays from the living room—a warm communal space with carefully curated furniture, cream-yellow walls, and a crackling hearth—for sojourns in Emily’s bedroom, where she plies her craft in a picturesque corner, or the estate’s verdant front lawn. (The war itself, meanwhile, makes an appearance only as a flurry of colorized photographs and overlaid body counts, a frankly incongruous montage that jars with the rest of the film’s circumscribed chamber drama.)

Camera movement, of which Davies has long been a master, is only sparsely deployed throughout A Quiet Passion, though always at significant junctures. The film’s first major ellipsis, which propels the story ahead from a prologue of Emily’s formative years (featuring Emma Bell as the young poet) to decades later, finds characters mutating before our very eyes from their younger to older selves in subtle forward glides as the family members pose for daguerreotypes. And though largely content to scrutinize the shifting details of Emily’s face during social scenarios, Davies nonetheless imagines the poet’s private headspace in a few privileged instances, one of which sees the filmmaker conjuring expressionistic nocturnal visions of a hypothetical spouse drifting like a specter up the stairs to Emily’s chamber.

This muted longing for more-than-fraternal companionship nags at Emily even as she scoffs at the institution of marriage as a needless handicapping of a woman’s innate potential. Such contradictions are at the heart of her character, but she endures her own internal tensions for the sake of harnessing and developing her art in privacy—all of which makes her a quintessentially poignant Davies figure. Meanwhile, the menace of death lingers as potently as in any other Davies film, befalling Emily’s parents over the course of the story and looming in a number of eloquent visual gestures. (Most breathtaking among them is a dissolve from an aging Emily, looking skeletal as the final rays of a sunset glare over her disease-stricken body, to an empty bed the following morning.) A Quiet Passion surveys both the vulnerability and temerity of Emily Dickinson without ever superficially elevating her to a divine status. The film’s accomplishment, rather, is in fleshing out the stark context behind her ethereal words.

A Quiet Passion’s subtly impressionistic lighting and colors are perfectly captured on Music Box Films’s Blu-ray release. The grounds around the Dickinson family home are eye-poppingly verdant, but the bulk of the film takes place in the increasingly suffocating confines of the house itself, and the ever-dimming light and cool color palettes look every bit as suffocatingly immaculate as intended. The interiors themselves have been made to seem lived-in, though, and the Blu-ray renders mirror smudges, sun-faded furniture, and other minuscule details with sharp clarity. The sound is just as crucial in rooting the film to Emily’s perspective, and the 5.1 audio track uses the side channels to amplify ambient effects, so that the birdsong coming from outside is almost euphoric or wooden floorboards practically moan with the weight of age and use. Dialogue is clear and, at times, realistically echoes amid the raised ceilings of the Dickinson house.

A behind-the-scenes video of A Quiet Passion’s production shows the painstaking historical recreations of the production and costume design, and features copious interviews with Terence Davies and the cast over the ways in which the filmmaker drastically altered facts concerning Emily Dickinson’s life in order to suit his thematic aims. Davies also takes pains to say how he wished to avoid making a typically somber biopic. A Q&A at the Film Society of Lincoln Center moderated by critic Michael Koresky rehashes a few of these points, while also exploring more of the actorly side of the film with Cynthia Nixon and Catherine Bailey. Nixon expounds on more of these ideas in a separate interview conducted with the CBC, while she, Davies, and other members of the crew recite some of Dickinson’s poems in a separate feature. Finally, Koresky contributes an essay on the film in an accompanying booklet, focusing on the minute details of Davies’s direction and how each small movement or transition captures as much suggestive detail as Dickinson’s own curt but profound poetry.

Terence Davies’s witty, formally audacious biopic is the latest showcase for his uniquely impressionistic cinematic style, and it arrives on Blu-ray with an A/V transfer that maximizes the impact of the film’s innumerable aesthetic flourishes.