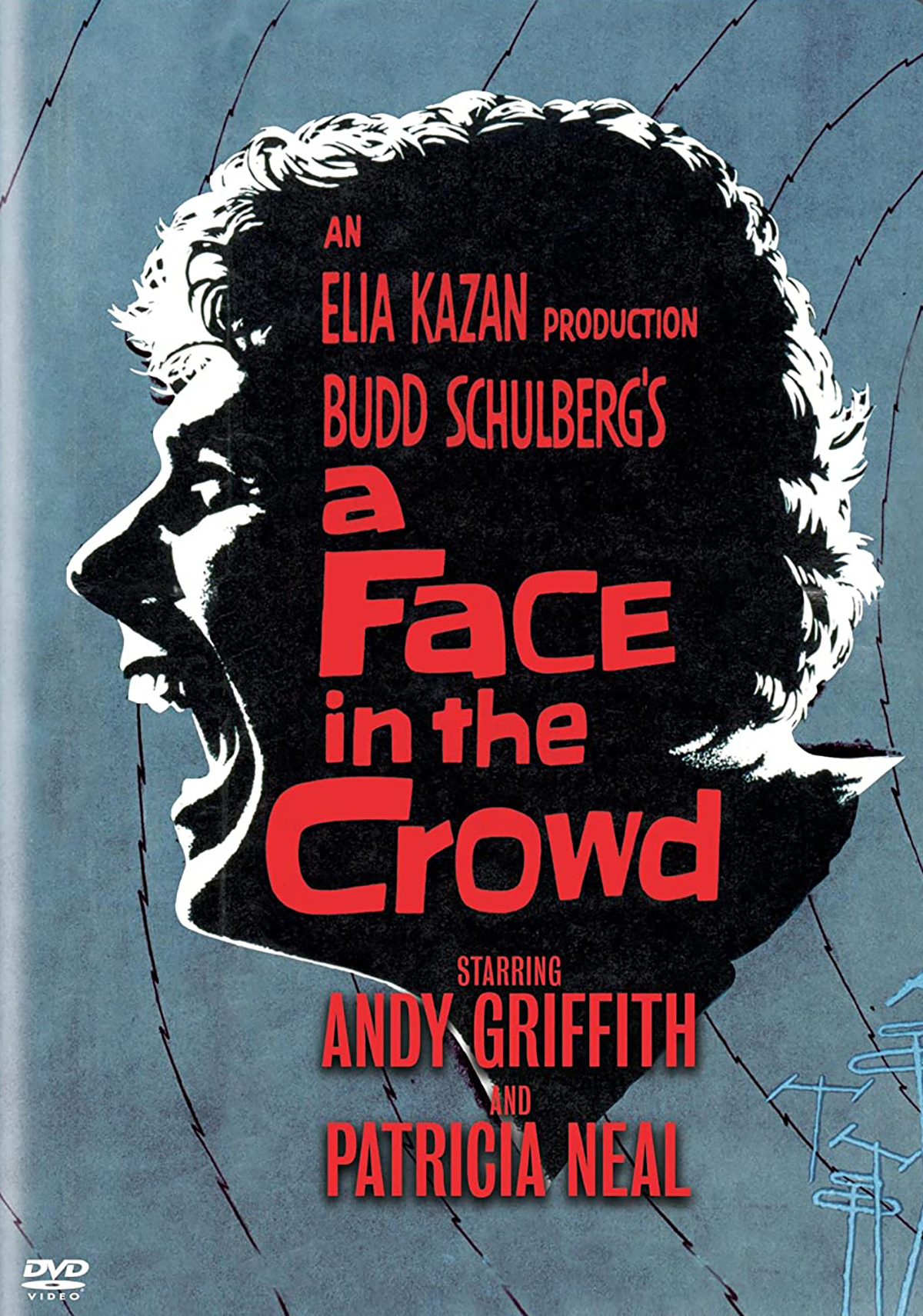 “Prophetic” is a word one might throw at Elia Kazan’s A Face in the Crowd, which burns from self-righteous liberal indignation that the media is inherently corrupt. But like Network it has not aged particularly well, and its points about the hypocrisy of populism are a little too dead-on. Folksy good ol’ boy Lonesome Rhodes (Andy Griffith, in a memorably obnoxious turn that may surprise the Matlock crowd) is discovered by radio producer Marcia Jeffries (Patricia Neal) while sleeping off a hangover in jail. She puts his grassroots ballad “Free Man in the Mornin’” on the radio, and before you can say “overnight celebrity” Rhodes has his own television variety hour. Rhodes does a good deal of jocular strutting in front of the cameras, winning over a mass audience with his down home, dumbed-down moralizing. (Kazan frequently shoots him in head-on close-up as he laughs right into the lens.) He catches on quick, and is latching on sponsors and courting favor with politicians, while hiding secrets from his hillbilly past. Exceptionally well paced, A Face in the Crowd has high energy that’s guided along by Griffith’s blustering, hooting and hollering portrayal of a reckless bastard. Neal holds Rhodes, and this chaotic movie, together as his sometimes girlfriend (when he’s not chasing after corn-fed beauty queen Lee Remick). Walter Matthau co-stars as a sidelines cynic who offers frequent wise asides that serve as a nudge in the audience’s ribs, and he’s as enjoyably crusty a screen presence as ever until Kazan betrays him with a climactic monologue/lecture that Explains It All To You. Maybe Kazan feels the same way Rhodes does: that the audience is too dumb to get it unless he spells it out for them, on his terms, in moral-minded black and white.

The black and white is appropriately high contrast, and holds up very well in the transfer. The sound levels seem lacking in range, maybe because Lonesome Rhodes is shouting all the time and everyone else is soft spoken.

The 30-minute documentary “Facing the Crowd” focuses mainly on the legacy of Elia Kazan as an actor’s director and his part in the Joseph McCarthy Communist witch hunt. The film historians interviewed here meekly defend Kazan and his beliefs, and one wishes they had included a more questioning voice among them. The history of A Face in the Crowd is thoroughly documented and includes interesting memories from Andy Griffith, Patricia Neal, and Anthony Franciosa (who cops to upstaging Griffith as much as possible, and desired more than anything to be a big star-all evidenced in his slimy, upwardly mobile leech of a supporting character). There’s also a theatrical trailer that plays up Griffith as the latest find from the man who discovered Marlon Brando. Griffith is quite good in the role, but let’s not push it, guys!

Strong performances and a fiery aggressive tone keep things moving, but A Face in the Crowd is dated and not particularly deep.

DVD Review: The Americanization of Emily on Warner Home Video