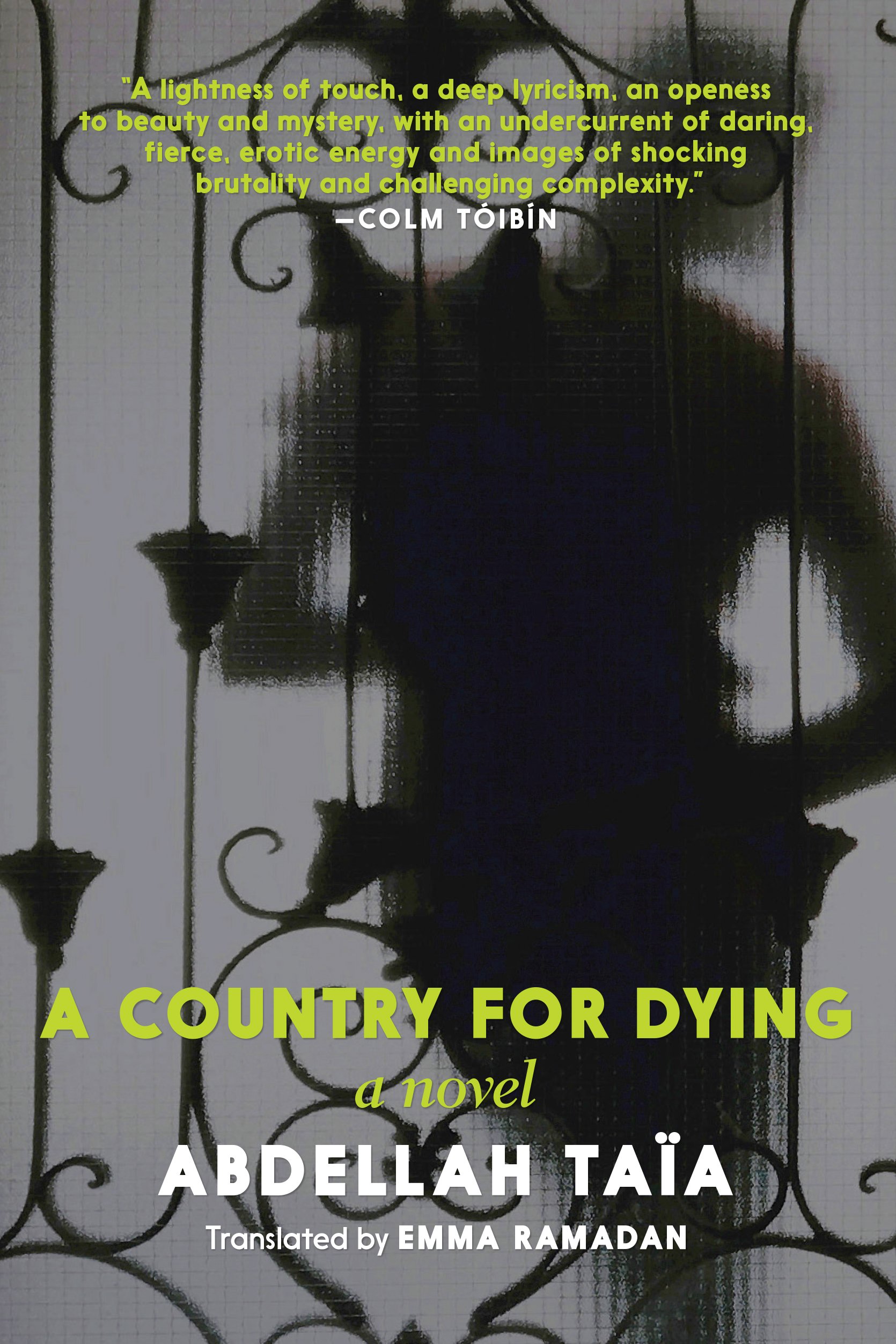 The figure of the queer child is the backbone of Abdellah Taïa’s novels. When his protagonists are grown-up, their reminiscing takes them back to childhoods marked by an almost naïve hunger for the smothering world. Like the children in many a Béla Tarr film, they’re too watchful of adults not to be aware of the miserable destiny that awaits them. For Taïa’s characters and for himself, from his harrowing early years in northwestern Morocco to an adulthood of perpetual foreignness in Paris, the only card ever left in the deck is the bittersweet power to leave: “Exile. Hope. Hell,” as he writes in his latest novel, A Country for Dying, recently published by Seven Stories Press in a translation by Emma Ramadan.

Unlike so much queer autofiction, the book is less concerned with actual lovers, or sex itself, than the detritus following their departure. In the instances where Taïa recounts sexual acts, it’s only to document their failure. Someone wants it but the other doesn’t; someone wants it and doesn’t at the same time, then is forced to do it anyway. His lovers aren’t his muses, women are: a nosy neighbor, a bakery cashier, his sisters and aunts, singers (Warda, Lata Mangeshkar, Oum Kalthoum), and actresses (Nargis, Soad Hosny). About halfway through, A Country for Dying breaks into an ode to Isabelle Adjani. It’s an ecstatic detour along the lines of Roland Barthes’s homage to Greta Garbo’s sharper-than-a-mask face with “two faintly tremulous wounds” for eyes. Adjani’s face is, in Taïa’s words, similarly haunted, and just as indelible in its whiteness: “The world ends. Adjani continues.”

Taïa’s lovers are thus mostly supporting characters, mere stepping stones for a subjective assessment, portals that take him back to earlier experiences of violence. Taïa is disarmingly unafraid to revel in the sensuality of trauma, even if, or specially when, it involves the impossibility of consent and children’s early experiences of the body. In A Country for Dying, a child gets her hair dyed by a male hairdresser. When the man pulls her hair very hard, she likes that “little violence.” It reminds her of her father’s hands: “Large. Never-ending.”

In the book, the queerness of children inhabits wistful adult women, cis and trans alike, who work as playful stand-ins for Taïa’s autofictional self. These are characters who never stop dreaming of an elsewhere, in search of a more bearable life through cinema, through music and through migration. The novel is a fresco of departures, imagined and actual, intertwining tales of the wretched of the Earth leaving their country in order to die in another.

Desolation follows these characters wherever they go: Morocco, Algeria, Egypt, India, Indochina, France. The world may seem hopeful in its endlessness, but in Taïa’s literature characters often live in trapped quarters. From the can-of-sardines family home with rooms with no walls and no paint where the young Abdellah sleeps amid the bodies of his many sisters in Salvation Army—which Taïa remarkably adapted for the screen in 2013—to the nosy neighbor’s suffocating studio of Rue de Turenne in La Vie Lente. In A Country for Dying, the protagonist is Zahira, a sex worker in her 40s and lover of Indian movies with a penchant for getting “dirty, broke immigrants” as clients, who she hosts in her 195-square-foot flat. For Zannouba, Zahira’s trans best friend who’s on the verge of getting gender confirmation surgery, the body itself is like a can of sardines squeezing the soul dead.

A Country for Dying is filled with imaginary letters, dialogues, and soliloquies where Taïa completely foregoes dialogue tags. Some of the most beautiful moments here emerge when dialogue turns into all but a string of poetic lines, and it becomes pleasantly unclear who the speaker and addressee are. These instances embody the to-and-fro of Taïa’s style, where an adult is always one feeling away from becoming a child again. We may not know who’s speaking but we know something ancestral is being written, or rewritten, in a way that recalls the dialogic narration in Manoel de Oliveira’s Visit or Memories and Confessions. In De Oliveira’s film, the voices of a disembodied man and woman emerge from the objects of a house that’s anything but small, but they’re just as wounded by the ravages of time, and state-sanctioned violence, as Taïa’s characters in their suffocating habitats.

For Taïa, the pain and the hope that the possibility of love triggers takes us back to the childhood home. And for Zahira, that home is located in Taïa’s hometown of Salé, Morocco, just north of Rabat. The book begins with what we may call the spectral occupation of that home’s second floor, which becomes the refuge for Zahira’s sick and dying father, a “circus lion suddenly old, in a cage suspended in midair,” defeated “with his vanishing virility.”

Zahira’s words flow seamlessly from first-person narration to her thoughts being directed to the dead father in short and disarmingly simple sentences. So simple that in the few instances when Taïa writes more abstract terms like “unconscious,” “commodity, or “anathema,” they feel like a jump cut in the text. We are inevitably conducted back to the intimacy of poetry rearranged into prose: “My nose smaller. My cheeks hollowed. And all around my head, fire.” These are the pillars of Taïa’s writing: small spaces, small sentences, small moments.

The poetic register of A Country for Dying is wrought by an eventfulness triggered by the tiniest things that just keep on echoing generations later: a memory, a song, a stranger. In one particularly poignant, and ever so fleeting, sequence in the book, Zahira visits the Luxembourg Gardens in Paris for the first time late at night with Mojtaba, a wounded Iranian man she takes in for a month before he disappears. It’s almost closing time, but instead of leaving, Mojtaba tells her that they should stay to enjoy the gardens alone in the wee hours—and they do. “The French are gone,” he tells her. “The garden is ours.”

A Country for Dying is now available from Seven Stories Press.

Diego Semerene is an assistant professor of queer and transgender media at the University of Amsterdam.