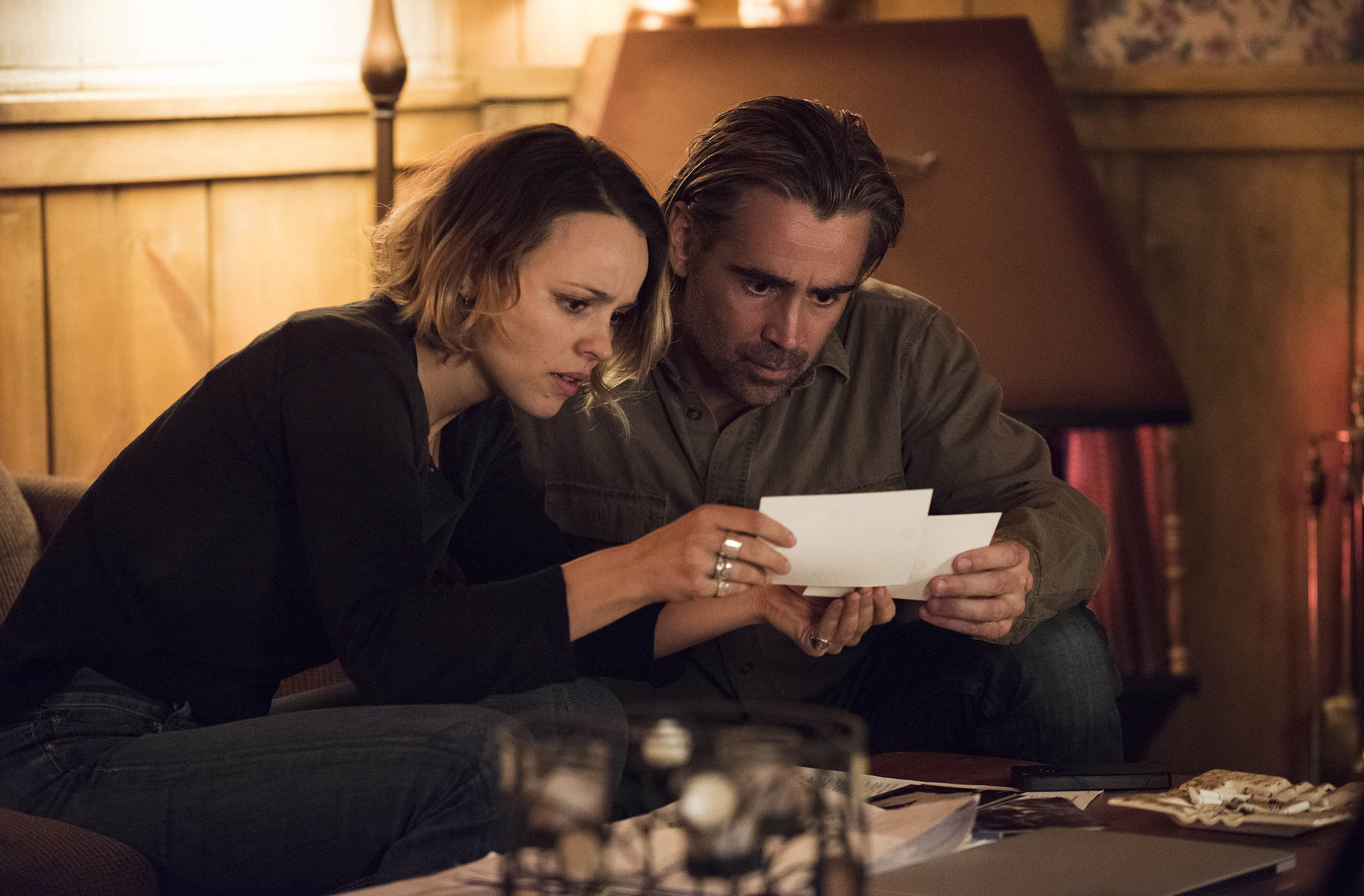 The problem with mysteries, especially fair-play ones, is that if you’ve paid close enough attention and solved it ahead of schedule, then a table-setting episode like “Black Maps and Hotels Rooms,” in which characters constantly explain how the pieces fit together, is nothing short of irritating. That’s because solving a jigsaw puzzle, for instance, can never be as satisfying as the act of physically putting it together. (After all, if you’d wanted a finished picture, you could’ve just bought one.) That, of course, is just one perspective, and the real heart of the episode comes from the constant reminder that we all have different needs and wants.

For instance, Dani (Carla Vila) believed that her sister, Vera Machiado (Miranda Rae Mayo), had been kidnapped, and Ani Bezzerides (Rachel McAdams) certainly thought as much when she rescued her from last week’s Orgy Mansion. But when Vera’s sobered up from her overdose of champagne and molly, she clarifies that she was happy being on the party circuit and that, in fact, all of the women were there by choice (and well paid for it). Sure, the occasional woman was murdered up in that blood-soaked cabin in the woods that Ani and Paul Woodrugh (Taylor Kitsch) found in Guerneville, but that was only if they broke the rules and attempted to take blackmail photos of the rich clientele. Echoing a conversation she had with her sister, Athena (Leven Rambin), back in the first episode, Ani suggests from her high horse that Vera was perhaps “put on Earth for more than fucking,” but that’s an uncharitable view of things. Vera’s happy, or, at the very least, she was getting the most out of a bad situation. “Everything is fucking,” she replies, so why not at least profit from it? Then again, this sort of bleak worldview can’t help but work against True Detective: If everything is awful, why bother watching any of it?

Nic Pizzolatto’s writing suggests that just because the world is stagnant and corrupt, life can still find a way to blossom within individual people. Ani’s in a tight spot: Whether she truly believed herself to be acting in self-defense at the time or not, she did murder a security guard, and she’s forced to spend this episode lying low in a series of hotel rooms, what with a warrant out for her arrest. But the highlight of the episode is watching her come to terms with her actions, confessing to Ray Velcoro (Colin Farrell) that she’d “been waiting my whole life for that. I think I even went looking.” Her whole life, after her childhood rape, has been about trying to put herself in the position to get a legal sort of vengeance; that said, she acknowledges her own manipulations. It’s no wonder that she’s able to give Ray the pardon he so desperately seeks at the end of the episode, telling him he’s not a bad man. Likewise, it’s no surprise that Ray corrects her, admitting that he is, but also that sometimes it’s okay to do a bad thing for a good reason.

That first night in the motel, with Ani still recovering from the drugs she was given, Ray rebuffs her advances, recognizing her vulnerability and perhaps also the fact that Ani’s attempting to distract both of them from the things in their lives that are broken. “This won’t fix things,” he says, doubling down when he hears the lie behind Ani’s response: “It usually does.” (She’s used sex like Ray’s used alcohol: as an escape. In any case, he knows an addict when he sees one.) The next evening, however, the two aren’t running away from anything; they’re running toward something. It might even be a beautiful moment for the series if it weren’t so staged by director Daniel Attias, who defuses all hints of subtlety with his longing close-ups and the swelling of music in the background. At this moment, there’s no room for other perspectives, only the director’s insistent, childlike viewpoint.

There’s also an interesting set of parallels between the increasingly Scrooge-like Frank Semyon (Vince Vaughn) and his theoretical ghosts of Christmas Past and Future. His henchman, Blake (Christopher James Baker), has committed the ultimate sin of disloyalty, working behind his back. Then again, as Blake points out, it’s nothing that Frank didn’t teach him to do—and nothing that Frank hadn’t done in the past. One wonders how much Frank is able to see of himself in Blake—all that potential—and whether that’s what drives him to murder the man so savagely, first smashing a glass across his face and grinding the shards against the carpets and walls, then shooting him in the gut to slowly bleed (and shit) out as Frank savors a glass of expensive liquor. (Say what you will about Vaughn’s abilities over the course of this season, but he absolutely nails the look of disdain and waste he gives to Blake’s corpse.)

On the flip side, Frank’s looking at his future—the man he wants to be—when he smiles at the confirmation that his own boss, Osip (Timothy V. Murphy), has been deliberately sabotaging and siphoning Frank’s businesses so as to keep Frank in his place. Like Ani, he’s perhaps aware of the contradictions in his own actions: that he’s punishing Blake for doing the same thing he’s attempting to do to Osip. Then again, just as he calls out Blake’s arrogance, he’s perhaps a little too oblivious to his own as he politely smiles to Osip and says, “I ain’t lasted this long without some knowledge of my limitations.” Given that, just a few hours later, Frank will burn down both the casino and nightclub (if he can’t have them, nobody can), it’s not entirely clear that Frank thinks he has any limits.

Unfortunately, the remainder of scenes in “Black Maps and Hotel Rooms” don’t do nearly as much with their characters. Frank warns a drunk-as-usual Mayor Austin (Ritchie Coster) to stop using his dynastic last name as a pick-up line, considering that his own son, Tony Chessani (Vinicius Machado), has been greasing palms left and right in order to consolidate his own power and oust his old man. Frank’s wife, Jordan (Kelly Reilly), once again attempts to convince him to simply walk away, and it’s unclear why seeing Blake’s corpse—as if she didn’t already understand the stakes—is enough to change her mind. Ray attempts to deliver the incriminating evidence to Attorney General Katherine Davis (Michael Hyatt) on a secret rendezvous, only to realize that she’s been killed; for some reason, the murderer hasn’t stuck around to take care of Ray too. Save for the sense of superiority we get from already knowing what Ani tells her sister, that she’s going to have to leave town, it’s unclear what seeing this play out actually accomplishes. (At least a similar scene with Ani’s father, played by David Morse, and her partner, played by Michael Irby, hint at reconciliation.)

Worst of all are the scenes with Paul, all of which are at odds with the rest of the series. His relationship with Emily (Adria Arjona) has always felt forced, and when he attempts to hide her in a hotel room with his detested mother (Lolita Davidovich), he can only feebly offer up the idea that he’s “just trying to be a good man.” Emily’s more prescient than she knows when she tells him that “You don’t try right.” This is meant to give Paul a redemptive motivation for walking alone into a blackmail trap (he doesn’t want her to find out about his homosexual past), but given what Paul knows about the citywide corruption, it only emphasizes that Paul doesn’t know how to live in the world itself. He can’t bring himself to ask Ray for backup, and though he’s able to outmaneuver four of his old private contractor buddies, who are now working for Catalyst, led by Police Chief Holloway (Afemo Omilami), those are the warzone conditions he’s most accustomed to. It’s only once he escapes the secret tunnels hidden beneath the city and makes it back out onto the streets, the public world, that he’s gunned down by Lt. Burris (James Frain), shot once in the back and then, despite his determination to live, crawling toward his gun while chanting, “No,” again in the head.

Ultimately, the only perspective people seem to be able to agree on is the one that comes with the finality of death and destruction. There’s no ambiguity or confusion in Frank’s destruction of the property Osip had taken from him: It’s an act of war. Paul’s death would be impossible to mistaken for anything other than an execution. The only mystery that remains, then, is just how many people are going to have to die next week to bring closure to this case, now that that the law has failed these true detectives so utterly and completely.

Hannibal Recap: Season 3, Episode 10, “And the Woman Clothed in Sun”

Hannibal Recap: Season 3, Episode 9, “And the Woman Clothed with the Sun”