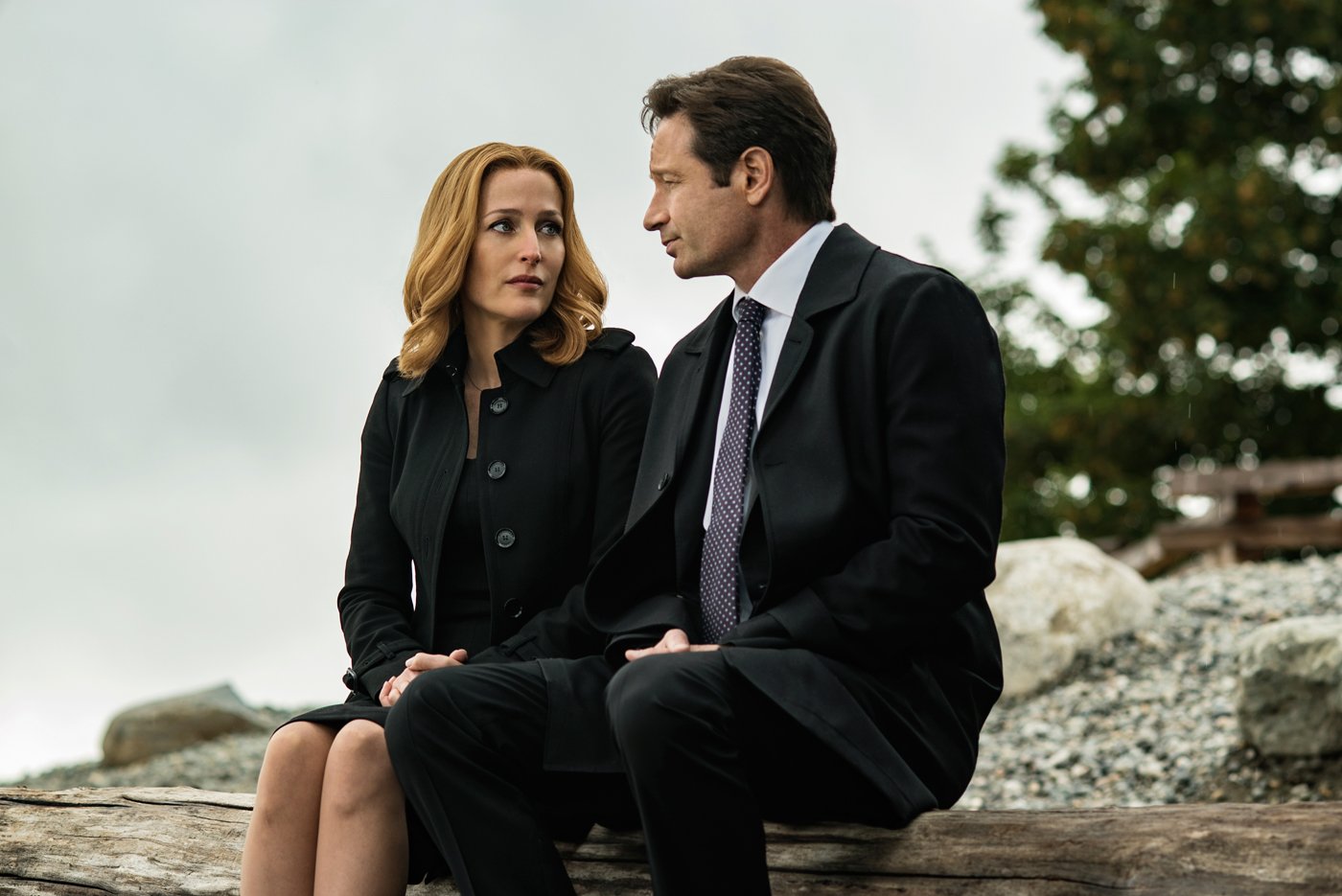 Tonight’s episode of The X-Files, “Home Again,” pivots on two narratives, one of which is promising and occasionally quite chilling. The first, which has social reverberations that suggest a fusion of Candyman and Land of the Dead, follows a group of bureaucrats and politicians in Philadelphia as they’re brutally murdered by a large, looming, albino entity that resembles the “Slender Man” of online urban legend, who leaves no footprints and who drips pus and maggots everywhere he goes, though his telltale signature is a used Band-Aid that’s left on the scene of every crime, which strangely leaves no discernable genetic material. A homeless person calls this creature the “Band-Aid Nose Man” (John DeSantis), saying this name with an impression of awe that subtly affirms this avenger as a possible champion of the disenfranchised.

The Band-Aid Nose Man’s victims are phonies who talk of wanting to help the homeless, while actually seeking to shunt them off Somewhere Else, where they will be Another’s Problem. H.U.D. developers wish to relocate a large homeless community to an abandoned hospital near a school, losing that school’s elected officials their good graces with their voters. The episode’s writer-director, Glen Morgan, another returning X-Files veteran, as well as the former writing partner of James Wong (who helmed this season’s “Founder’s Mutation”), distinctively stages the Band-Aid Nose Man’s killings, skipping frames so that the killer moves in an irrational manner that suggests something out of a nightmare or a J-Horror film. The gore is robust for network television, and effective for Morgan’s timing of the money shots, which allow one to feel the rage of this creature, who’s channeling the rage of an entire subterranean community forgotten by its social betters. Each killing ends with a kind of suggestively ejaculatory catharsis, whether it’s a spraying of arterial blood or the triumphant dangling of a severed spinal cord.

But Morgan rarely has the nerve to implicate us—comfortable viewers watching The X-Files on laptops and flat-screen televisions with their heating, snacks, and loved ones—in the self-absorption of the Band-Aid Nose Man’s victims, who are drawn as uninterestingly narrow fat-cat caricatures so as to nurture our sense of social superiority. Though there’s an image that complicates this simplicity, when we see Nancy Huff (Peggy Jo Jacobs), a school board president, making coffee in her expansively rarefied house. The solace this woman takes in the preparation of this coffee, while peeling back a package of yogurt and checking a voicemail from her husband, briefly humanizes her, likening her and her habits to us and our own reassuringly privileged rituals. Unsurprisingly, then, it’s Nancy’s murder that’s the most disturbing and implicating, equally courting the audience’s guilt and craving for vicarious revenge.

There are other memorable images, such as of the Band-Aid Nose Man climbing back into his supernatural chariot, a city garbage truck, as its trash compactor crushes him and the remains of his victims down into the presumably figurative muck from which he sprang. And the lingering shots of the creature’s spray-painted likeness on various dilapidated structures have a primal storybook power. (The Band-Aid Nose Man’s origin story—which suggests Banksy’s greatest and most disturbing triumphs of protest art taken to newfound extremes—is distinctively unnerving.) But one also has to sit through quite a bit of editorializing dialogue along the lines of “I never knew you could make so much money on the homeless” and “people treat people like trash.” Morgan doesn’t trust his concept to do the talking for him.

This obviousness might have been less of a liability if “Home Again” had been directed with the ruthless precision of a classic Morgan/Wong-penned episode, such as season four’s “Home” (which this episode’s title deliberately recalls), but Morgan routinely returns to his second story, which has nothing to do with the first, throwing off the pacing. Scully’s (Gillian Anderson) mother, Margaret (Sheila Larkin), is hospitalized after suffering a heart attack, conjuring Scully’s issues with her own past hospitalization, as well as the guilt that the latter feels over giving her son, William, up for adoption. Margaret wears a quarter on a necklace, and Scully wrestles with that mystery while trying to find her long-lost brother, Charlie, so he can speak to Margaret before she dies.

There’s a chilling moment when Scully is investigating the Band-Aid Nose Man: Her phone rings, and the name “William” appears on the screen, suggesting that her son, rather than her brother, is actually calling. For one brief instance, we’re primed to wonder if the Band-Aid Nose Man is William, the son, who’s grown up to embody mutant nightmares that far surpass Scully’s worst fears, as dramatized in “Founder’s Mutation.” If this had been the case, the episode’s two plots could have converged brilliantly, and “Home Again” might’ve been some sort of perverse classic.

Or, if this material were even given room to breathe and expand as is, it might’ve made for a moving familial episode along the lines of the Morgan/Wong-penned “One Breath,” from season two. But Scully’s torment feels obligatory here, even dull, as “Home Again” settles into a routine and contrived alternation between the plots. Under these circumstances, one wonders why an interesting Monster of the Week is repeatedly sidelined for references to William that are redundant of material that was more elegantly mined by “Founder’s Mutation.” One guess is that Morgan was required to do this to set up an arc for the final two episodes of this season, but The X-Files also has a long tradition of referring to incidents that never really amount to much in the long run.

Near the end of the episode, Morgan’s desperation to thematically tie Margaret and William to the Band-Aid Nose Man becomes especially evident when Scully tells Mulder (David Duchovny) that she wants to believe, needs to believe, that they didn’t treat William “like trash.” It’s an embarrassing moment. This emotional reverberation is structural, evocative of script mandates, rather than of Scully’s trauma.