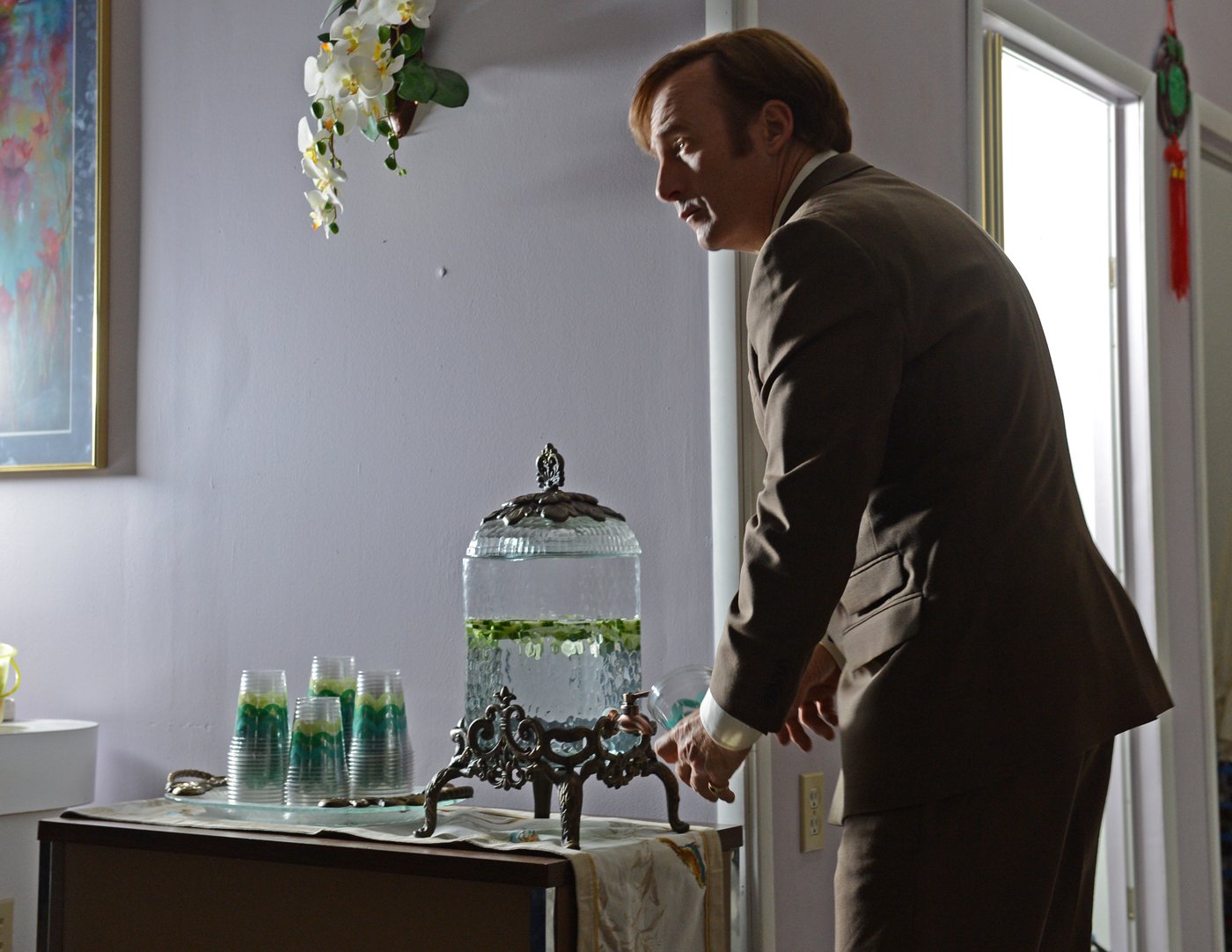 With Better Call Saul, creators Vince Gilligan and Peter Gould forge with their collaborators an aural/visual equivalent of the crisp prose favored by crime-fiction masters like George V. Higgins, Lawrence Block, Donald Westlake, and Elmore Leonard. Images are bright and sharp, as one might expect of a series set in the hot, sunny sprawls of Albuquerque, New Mexico, and this impression of sharpness is intensified by a playful and continual contrast between dueling focal points in the background and foreground of the frames. While a lawyer talks his client out of prosecution, for instance, we see the attorney and the police in the front of the shot, while the client mulls around in the background of another room, oblivious to the manipulations required of earning him his freedom. Colors are deep and robust, sometimes lurid in the manner of a dime-store novel’s cover, and without calling attention to themselves. The series is so casually beautiful as to risk being taken for granted.

This aesthetic is more than style for its own sake. Like the punchy verbiage of much great American crime fiction, this staging embodies a way of doing more with less, of boiling events down to their essence, which also serves as a kind of implicative manifesto for ridding life and art of detritus and pretension. This formalism serves to inform Better Call Saul with a sense of stillness, which is a blessed relief from the desperate, frenetic pointlessness of network crime shows, which often derive their flatulent intensity from endlessly moving cameras, meaningless jargon-heavy dialogue, and CGI that purports to take us directly into the corpses of recently discovered victims.

The show’s writing is as economic and poetically pared down. Each moment is compact, leading to the next with unpredictable, behaviorally astute precision (the flashback scenes are particular models of structural ingenuity, often revealing elements of plot that might not be obvious until many episodes later). Gilligan and Gould have a refreshing tendency to regard viewers as attentive adults who can remember events from the previous season, peppering their narratives with recurring in-jokes that reveal a wealth of emotional information in a matter of seconds. When Jimmy McGill (Bob Odenkirk) requests a cocobolo desk from the Santa Fe law firm newly employing him, we know he’s remedying a dashed dream from season one, when he nearly used stolen money to secure an office for himself and, ideally, his friend, potential lover, and fellow attorney, Kim Wexler (Rhea Seehorn).

This notion of disappointments corrected, of a man attempting to justify himself to his friends and family, is broached earlier when Jimmy takes Kim aside and asks her, with startling bluntness, if “they’re going to happen” if he takes this job offer (which she brokered). Jimmy’s revealing more of himself than he intends to, verbally encapsulating his manias, which are so poignantly of the everyday American male variety: He needs conventional success to feel as if he’s deserving of companionship, or more generally of status as a human. He feels broken, and assumes that money and social standing can serve as the adhesive.

Season one cumulatively established the specifics of Jimmy’s social estrangement with the ruthlessly logical precision of a math equation, gradually evolving from a good to great series, turning an amusing Breaking Bad character into a full and tormented protagonist in his own right, contextualizing him without banally psychoanalyzing him. Like most Americans, as insidiously conditioned by pop culture, Jimmy feels that he’s never quite in society, truly belonging to it, though he’s one big success away from joining the club. This profound inferiority complex is exacerbated by a dysfunctional relationship with his brother, Chuck (Michael McKean), a legendary attorney who was revealed in the first season to be sabotaging Jimmy under the guise of mentoring him. The brothers are enacting a genre-television version of a familiar dynamic: Chuck is the brilliant, dutiful, driven grinder who’s worked himself into mental disorder as a founding partner of a prestigious firm, while Jimmy, in Chuck’s mind, has glided on charm, only superficially renouncing his petty criminal ways when convenient.

Chuck isn’t entirely wrong, and his judgment clearly springs in part from his own personal resentment and pain, but he’s not all right either. Jimmy, with his intelligence for reading people, knack for ingratiation, invention, and cojones, is a natural-born charlatan—a weirdly humanist con man, which makes total sense when one considers his future as a player in Walter’s schemes. Jimmy has it in him to be a great attorney, but he comes to life as a crook, and this conundrum, with its resulting identity conflict as to where Jimmy precisely “fits in” among the world, is a metaphor for anyone who’s gifted in ways that are essentially unvalued by society. Namely, artists.

The pair of episodes made available to the press imply that season two of Better Call Saul will deepen the primary quadrangle driving the series: Between Jimmy, Chuck, Kim, and Mike (Jonathan Banks), a pragmatic enforcer-for-hire who quietly beckons Jimmy to join him on the murky side of the law, where Jimmy’s talents shine. A minor character from the first season returns, escalating tension between Mike and a drug dealer, Nacho (Michael Mando), that’s illegally resolved in a terrifically curt and hard exchange outside an upholstery business, and that’s also more or less legally resolved by a slice of invention that’s grandly bizarre even by Jimmy’s standards.

Mike is the distant side of the quadrangle, there if Jimmy wants him, as he’s a man too seasoned and shrewd to make the mistake of applying ostentatious pressure. In his despairing, manly fashion, Mike is as sharp as Jimmy, and this nuance is representative of the show’s great empathetic strength for rendering everyone with equal vividness. More immediately pressing on Jimmy are Chuck, who represents the ugly, neurotic side of social conformity, and Kim, who loves Jimmy, but is clearly uncomfortable with his dark side. She can flirt with this darkness, as she does in a short con in the season premiere, but she can’t commit, though she offers Jimmy the validation that Chuck isunable to give, which is starkly underlined when she places her hand on Jimmy’s leg, restoring his confidence just as Chuck’s presence in a legal briefing threatens to deliberately reduce Jimmy from a rising lawyer to a stammering little brother.

Jimmy’s come a long way from the nearly homeless grifter of Better Call Saul’s first season, with opportunities and an honest support system in place, yet there’s a wounded, nihilistic side of him that must pick at figurative scabs, pissing in the face of presumed superiors, as cheekily summed up by his irresistible urge to flip a light switch in his new office, which is plastered with a label advising that it always be left on. Jimmy flips it off and nothing seems to happen. Hovering like a storm cloud over this wonderful series is the knowledge that, one day, Jimmy will flip the wrong switch.