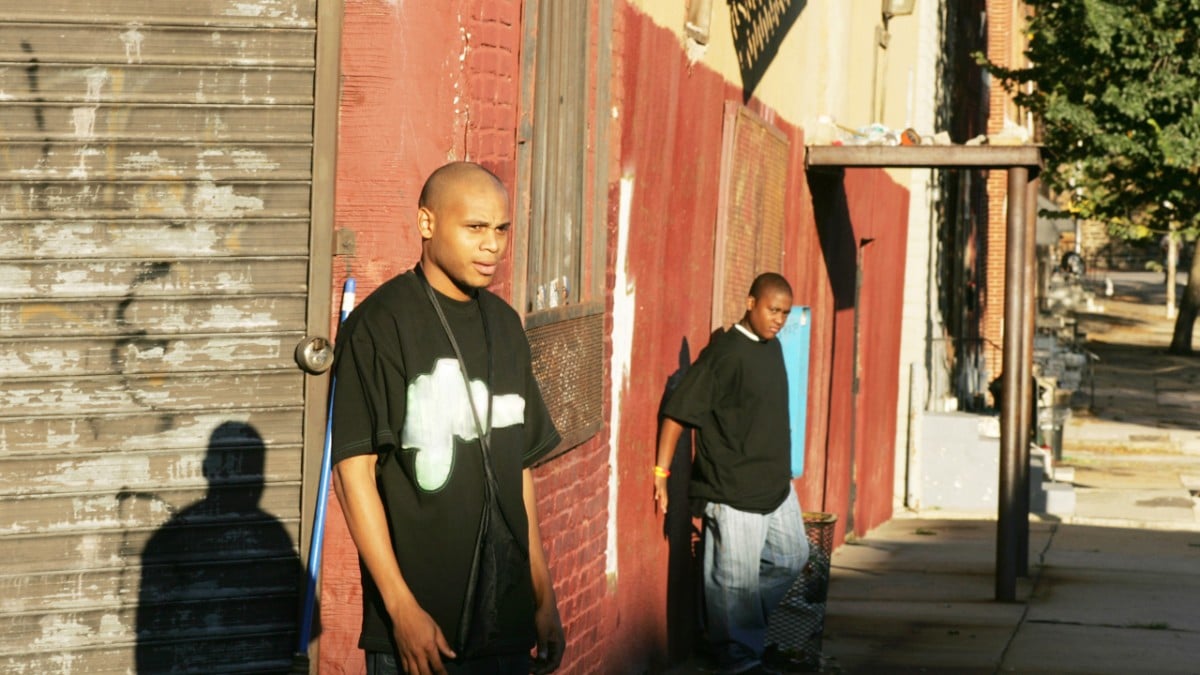 Marlo Stanfield has maneuvered to the top of the West Baltimore drug trade, and he’s executing a broad campaign to stay there. Early in the second episode of Season Four of The Wire, Marlo (played with ominous elegance by Jamie Hector, above) takes a tour of the neighborhoods to show concern for his constituents, in this case clusters of children wringing one more week from summer. His deputy approaches a group, reminds the kids they’ll need new clothes for school, and hands them each a pair of bills from a stack of hundreds while Marlo stands by the vehicle, acknowledging their cries of thanks with a regal nod. As he climbs into the backseat of the SUV to head to the next stop, posters on the wall behind him advertise candidates for city council, state’s attorney, and mayor, but the most influential position in the neighborhood belongs to Marlo. His deputy, Monk Metcalf (Kwame Patterson), turns around from the front passenger seat and affirms the value of what they’re doing. “Your name gonna ring out, man.”

This tableau recalls the nearly identical physical trappings of the scenes from this season’s premiere of Councilman Carcetti (Aidan Gillen) campaigning for mayor (right down to the seating arrangement in the SUV), one of many occasions on The Wire when pairs of characters from different worlds strike an eerie resemblance to one another, if only for a moment. While Marlo and Carcetti massage the citizenry, Assistant State’s Attorney Rhonda Pearlman and Officer “Herc” Hauk each navigate internal office politics wildly complicated by unexpected events. Herc (Domenick Lombardozzi), once a narcotics detective, now reports to the mayor’s security detail as driver and bodyguard, an assignment short on action but a pipeline to promotion. Hoping to make the next sergeant’s list, Herc rationalizes the soft duty to his new partner, admitting, “Shit, if you can make rank the right way, I’ll still be working Western drugs.” All the waiting around gets to him, though, so he wanders through City Hall looking for his shift lieutenant and some work, opening doors in increasingly indiscriminate fashion until he stumbles on the mayor catching a blow job from his secretary. Spooked by the career ramifications of this jackpot (“Fucked in the ass with a pineapple,” is how he puts it to his ex-partner) and in over his head about how to play it, Herc seeks the counsel of Maj. Stan Valchek, a veteran chit trader who sees the upside immediately. Valchek (Al Brown) tells him to say nothing and act like the whole thing never happened. “It just lays there like a bad pierogi on the plate,” he envisions, “both of you pretending it ain’t there.” Once Herc demonstrates the requisite amnesia, he writes his own ticket. “Oh, what I wouldn’t give to be in your shoes right now,” Valchek chortles with such relish he can barely get the words out. “Kid, careers have been launched on a hell of a lot less.”

ASA Pearlman has her own pineapple dropped in her lap, and, like Herc, her focus goes straight to the trajectory of her career. When Detective Lester Freamon (Clarke Peters) arranges a batch of subpoenas targeting high-level political and financial allies of the mayor as conspirators in the Barksdale drug empire broken up last year, Rhonda (Deirdre Lovejoy) implores him to hold back, noting the calamitous timing of doing this three weeks before an election in which her boss is in a tight race on the mayor’s ticket (“The front office is gonna go batshit,” she laughs helplessly to her boyfriend in bed). As she sees it, either her boss wins re-election as State Attorney in spite of the scandal and jettisons her for her role in it, or his loss ushers in a new administration wary to trust her with the narcotics division. “It’s Baltimore, Lester,” is how she finally frames the inevitable political blowback, the only apparent consideration for Rhonda or Herc as they formulate their strategies.

One of the subpoenas in question lands on the desk of State Senator Clay Davis (Isiah Whitlock Jr.), who years earlier midwifed an exchange of Barksdale drug money for advance notice of which Baltimore neighborhoods were slated to receive federal redevelopment grants, allowing the cartel to snap up seemingly worthless real estate before the HUD money made the properties valuable again. Davis also funnels bribes into Mayor Royce’s campaign chest in his capacity as deputy campaign chairman, an arrangement he assumes inoculates him against any city narcotics investigation reaching all the way to the statehouse. This betrayal of quid pro quo sends Davis into a tirade on Royce (Glynn Turman), who pleads ignorance of the investigation and is essentially powerless to squash it with the eyes of the electorate trained on him (Royce, as he always does when talk turns to his illegal fundraising, snuffs the discussion of the money’s origin with, “I don’t wanna know”). Davis cloaks his crimes in magnanimity, arguing that he took the tainted funds for “the team,” and that to raise the money they need to hold power requires doing business with those who have it. He articulates the strategy by braying, “I’ll take any motherfucker’s money if he giving it away.”

Across town, Namond Brice (Julito McCullum), a pony-tailed soon-to-be-eighth-grader, utters those exact words to his neighborhood buddies. Nay, like Davis, is a beneficiary of the Barksdale largesse, sporting pricey throwback jerseys purchased from a monthly stipend given his family to ensure the continued silence of his father, Wee-Bey, a former top soldier in the Barksdale operation who pled to multiple unsolved murders tied to the syndicate. A reunion at the prison visitors’ center turns the standard family-time lesson on its head. Wee-Bey (Hassan Johnson) teases Nay about his new facial hair, then grills him about his job working for a local drug gang, alternately offering advice, encouragement, and a stern lecture on work ethic, summarizing, “Either you real out there or you ain’t, Nay.” When Marlo and his entourage roll up on Nay and his friends to hand out more cash, one of the boys, Michael (Tristan Wilds), refuses the offer. Nay can’t comprehend the principle, but Michael explains later, “That owin’ niggers for shit, man, that ain’t me,” prompting Nay’s word-for-word recitation of Davis’s motto.

Two guys not looking for any handouts are Cutty and Bubbles. Cutty (Chad L. Coleman) finished a 14-year prison bid last year with no legitimate entries into the workforce, so after floundering briefly as a day laborer, he accepted a position as muscle for a weakened Barksdale gang gearing up for a turf war with Marlo’s comers. He proved a reluctant strongman, flinching when he drew a bead on Marlo’s lieutenant in a failed ambush. As he explained afterward to Avon Barksdale himself, “It ain’t in me no more.” Barksdale (Wood Harris) respectfully cut him loose, seeing a man who lost a chunk of his life to the game and owed no one. Now Cutty is back riding the truck to day jobs as a landscaper, which buys him the opportunity to spend every night training fighters at a boxing gym with his name on it, opened with the bureaucratic assistance of church and state officials trading political favors (“How y’all regular folk get it done in this town?” Cutty asks in wonder as the political players steamroll the permit process with a game all their own). The gym fills with neighborhood boys, many drawn from the corners, along with a growing crowd of their single moms looking to get with Cutty through home-cooked coercion. His boss at his day job, noting Cutty’s dependability and improving Spanish language skills, offers to go in together on a second truck with Cutty as crew chief so they can cover twice the ground. Cutty doesn’t even consider the proposal, though; his chance to be a mentor to kids like Namond and Michael feeds him more than any business partnership ever would.

Bubbles (Andre Royo) hopes to make an identical offer to franchise a second cart for “Bubble’s Depo,” essentially a convenience store stocked with dice, condoms, playing cards, Phillie blunts, and paint cans that Bubbles rolls through the neighborhood with his young “intern” in tow. A longtime heroin addict, Bubbles is generous with his accumulated wisdom, whether he’s mentoring his greenhorn running buddy, or a narcotics detective trying to go undercover with junkie verisimilitude, or now the young man, Sherrod, he claims is his nephew. His plan to split up and double their “market share” is put on hold, though, when Sherrod proves incapable of handling the sales arithmetic. As Bubbles warns, “You gotta step up them math skills if you wanna advance here in this here enterprise.” The boy questions whether a return to school is fruitless at this point, remembering how his last teacher never even looked his way. “So you roll out,” Bubbles taunts. “Who get hurt behind that, huh, the teacher or you?”

That night, Sherrod (Rashad Orange) lies in bed in a dank, candlelit cinder block room and startles Bubbles mid-fix, telling him, “If you want, I could go to school some.” The next day, Bubbles puts on a tie and escorts the boy to the local middle school for registration, self-consciously patting down his own hair to validate his guardianship. As the assistant principal walks the pair back to her office, Bubbles passes Prez (Jim True-Frost), a former narcotics detective turned teacher. Having once known each other from Bubbles’ periodic work as a confidential informant for Prez’s unit, they share a look of pure confusion as to how a junkie and a failed narco might find themselves crossing paths in the back offices of Edward J. Tilghman Middle School. The coincidence isn’t so puzzling after all; on The Wire, lives intersect and influence each other in improbable combinations.

Walking and Talking: The Quick Wit and False Heart of Aaron Sorkin’s Studio 60 on the Sunset Strip

A Doctor in the House