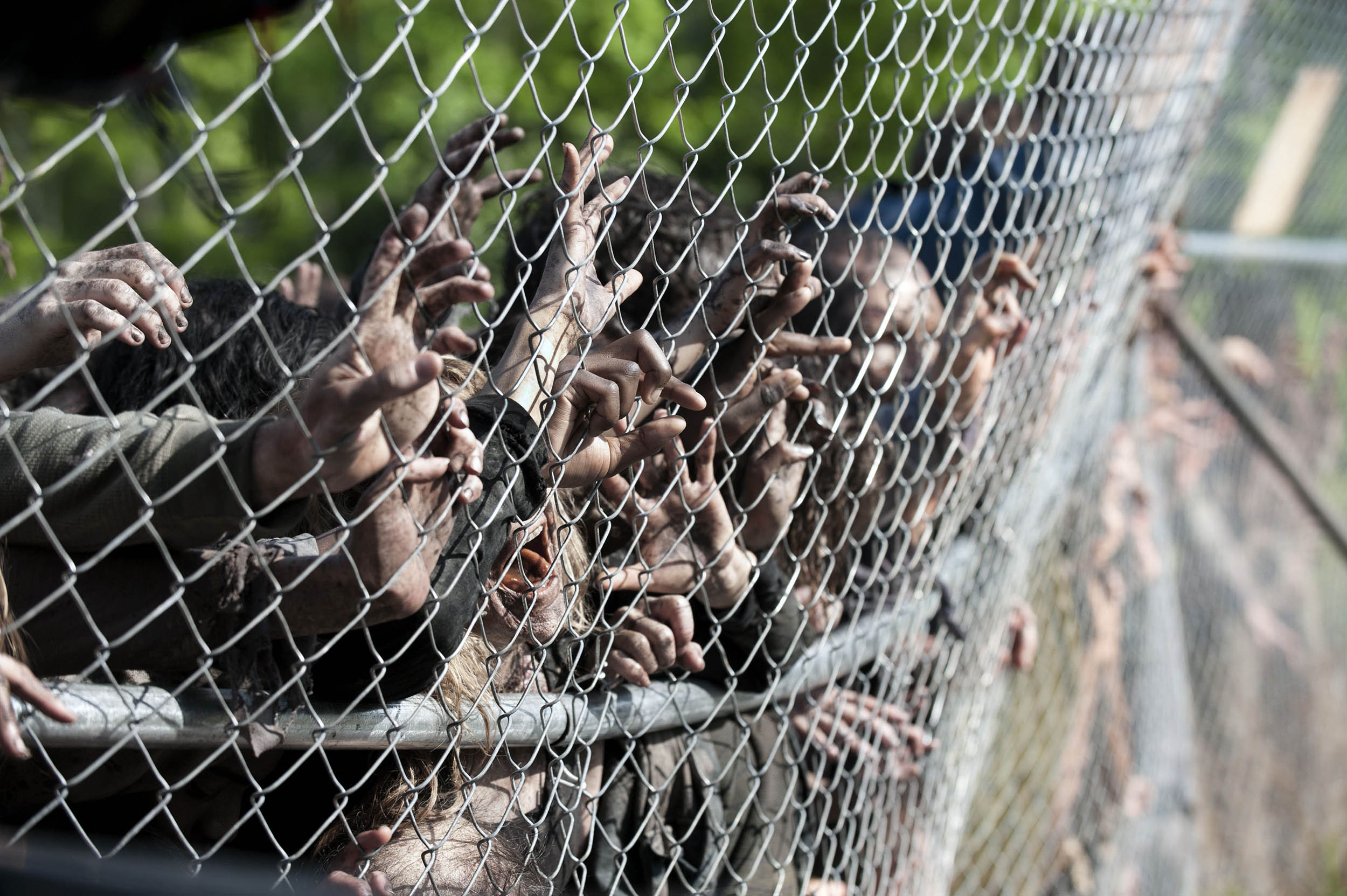 After last week’s quiet game of setup, the action starts fast and strong in the second episode of The Walking Dead’s fourth season. Boasting a high quotient of human entrails, the early scenes of a zombie attack from within the prison carry a similar jolt as the breach last season that claimed the lives Iron-E Singleton’s T-Dog and Sarah Wayne Callies’s Lori. But the shock of the attack is quickly displaced by a growing, weary exacerbation among the community of survivors. Those who’ve lived this long in a world overrun by insatiable flesh eaters have learned that the threat of death is a condition of living. Tonight’s episode, dubbed “Infected,” keys in on these sensibilities, emphasizing the complex stakes of the aftermath rather than the intensity of the event itself. In doing so, it amounts to one of the most satisfying recent entries in the series.

After Rick (Andrew Lincoln) and the others realize that some form of the flu caused Patrick’s (Vincent Martella) death, thus triggering the walker attack from inside the prison, doubt quickly settles in as they talk over the next steps and measures to prevent further spread of the disease. The scene in which the newly formed council, which includes Rick, Hershel (Scott Wilson), Daryl (Norman Reedus), Carol (Melissa McBride), and Glen (Steven Yeun), sits around a table and discusses how to best move forward is a keen demonstration of how compelling The Walking Dead can be when it buries its human dilemmas underneath conflicts riding along the surface. No one is immediately expressing their innermost thoughts or voicing endless moral platitudes. And yet, through all the strategizing, what they’re actually doing is managing their uncertainty in the face of a new threat. In these exchanges, it’s as if the seeds of a more character-centric drama are being planted. We see characters that want to protect each other and everything they’ve built together, but who nonetheless must decide to keep a necessary distance from one another.

As the question of whether to leave the prison hangs over the proceedings, the group must also address the mounting threat of walkers outside, whose increasing (and apparently provoked) herding patterns have weakened the fences around the facility. And yet, despite the escalating anxiety, “Infected” keeps the focus squarely on how the bonds among characters have imposed new burdens on them. For example, Rick’s resolution to take up arms again and give Carl (Chandler Riggs) his gun back could have come across like a manufactured writer’s solution to a dilemma, but instead it manifestly conveys the fear flowing out of parental concession that you cannot control your child’s fate forever. Rick has no choice but to trust that Carl will make the right decisions, even if he remains full of doubt in handing over the gun. On the other hand, Carol, already having lost her daughter, is much more hard-lined in counseling two little girls who must say their farewells to their father, who was bit in the walker outbreak at the start of the episode.

In addition to the dramatic beats along the thematic line of coming to grips with reality, “Infected” also evokes a sense of emotional discovery. Michonne’s (Danai Gurira) outpouring of tears upon holding Rick’s baby girl Judith is a case in point. The quiet intimacy of the scene can be counted among The Walking Dead’s most genuinely impactful moments. Michonne’s hardened and rogue ways would ostensibly make her the last person one would expect to have a breakdown. But Gurira’s affecting portrait of long-lost maternal love suggests a wellspring of potential and opportunity as her character continues to take shape.

While The Walking Dead has finally gained a grasp of Michonne, it still has yet to get a handle on certain other characters, most notably Tyrese (Chad L. Coleman). Since first appearing midway through last season, Coleman is getting increased screen time this time around, and while the actor is making the most with thin material, his presence nonetheless remains somewhat jarring. Perhaps the discovery he makes of his girlfriend Karen’s (Melissa Ponzio) gruesome fate will be the catalyst for Tyrese taking a more definitive role in the group and more broadly in the series. At this point, however, he has little connection to the group or the larger story.

Minor complaints aside, “Infected” achieves the difficult balance of traversing various narrative threads while maintaining a powerful emotional focus. Many individual scenes and exchanges are rife with tension and longing, as they vividly depict the onerous task of shifting back to survivor mode after a small taste of stability. Taken together, the deeper impression these moments leave is that underneath all the strategizing and cold separations these characters must make in order to keep going, is a relentless struggle to come to terms with the distant feelings from another life.