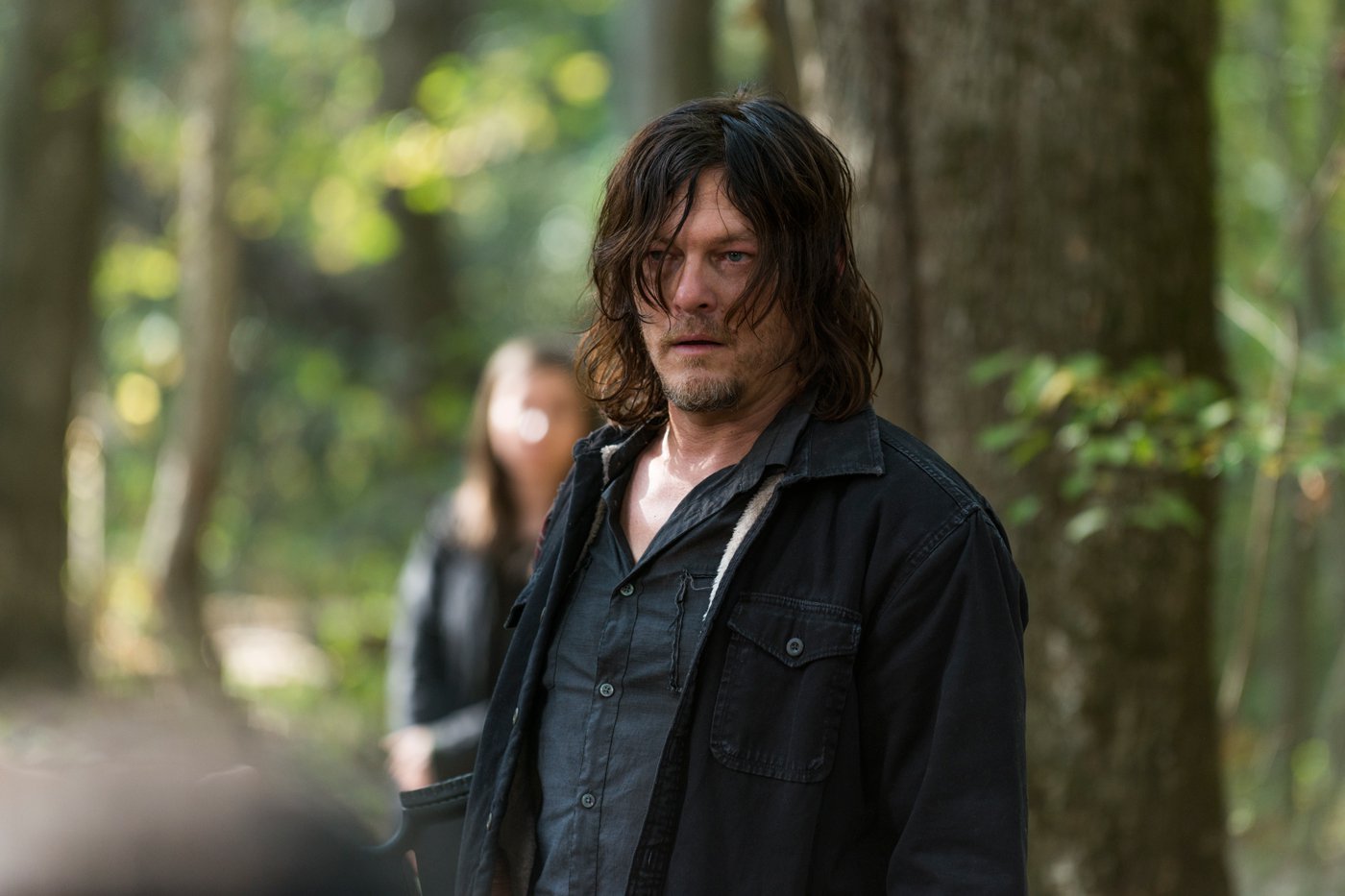 Aside from the armored walker that Rick (Andrew Lincoln) fought in the junkyard where Jadis’s people live, it’s been months since roamers posed a credible threat to anyone on The Walking Dead. They’re usually just a slightly titillating excuse for some action, and the catalyst for a jolt of camaraderie or tension among the humans they encounter. True to form, the barnacle-festooned skeleton that stumbles into focus at the start of “Something They Need,” and the herd that materializes behind it, lurch obligingly into Oceanside just as Rick’s arms raid is teetering on the edge of catastrophe.

The walkers appear just as the Oceanside residents and the invaders from Alexandria and the Hillside are stuck in a Mexican standoff, with Oceanside’s leader, Natania (Deborah May), holding a gun to Tara’s (Ma Masterson) head. Like villains from a 1980s chop-socky flick, they also approach at just the right time and pace, and in just the right configuration, to be easily defeated—but first the humans must take their guns off one another to train them on their common enemy. Natania remains unmoved by the show of solidarity (not to mention Tara’s plea for unity), but enough of her followers, including leader-in-waiting Cyndie (Sydney Park), bond with Rick’s people during the fight for the two groups to form a fragile truce.

The walkers that attempt to dine on Maggie (Lauren Cohan) and Gregory (Xander Berkeley) while she gardens just outside the Hilltop are the flipside of that coin, illustrating the chasm that separates these two. As Gregory collapses in terror, forcing Maggie to flex her walker-whacking chops to save him, it’s clear that her generous offer of unity could never work. Honorable as always, she defends him to the Hilltop residents who witness his humiliation, assuring them that he’s new to this and will learn. But they’re not about to forget what they’ve just seen, or that he lied to them about never having dispatched a walker. Besides, Gregory, who seriously considered killing Maggie moments before she saved his sorry ass, is surely way too insecure to forgive her for showing him up so effortlessly, or so publicly.

There’s still a lot of table-setting to be done before next week’s season finale, which writer Corey Reed and director Michael Slovis deal with mainly by stacking up thin slivers of information. There’s plenty of quick cutting between pairs of significant characters. The most successful of these are the pas de deux between Maggie and Gregory and the reconnection between Tara and Cyndie (could they be a couple in the making?). Those two have a sweetly awkward little moment when Tara says, “Thanks for saving my life before. And the other time. Oh, and then the other time. And maybe today.”

More perfunctory are a rare glimpse of Aaron (Ross Marquand) and his partner, Eric (Jordan Woods-Robinson), who declares that he’s now ready to join the fight against the Saviors, and lightning-quick check-ins with Rick and Michonne (Danai Gurira), with Jesus (Tom Payne) and Daryl (Norman Reedus), and with Carl (Chandler Riggs) and Enid (Katelyn Nacon), who exchange a few curt words about the people they’ve killed—or left alive and presumably, at least in some cases, wish they hadn’t. The layering of information works best when sound is used to braid storylines together, particularly when an earlier conversation between Tara and Rick about the ethics of invading Oceanside plays over silent footage of Rick’s group making their way stealthily toward the resort. The conversation lasts long enough to provide insight into Rick and Tara’s feelings, while the footage builds up tension in advance of the ambush.

The episode’s most fleshed-out segment updates us on Sasha’s (Sonequa Martin-Green) thwarted attempt to assassinate Negan (Jeffrey Dean Morgan). She survived her kamikaze mission, and apparently not just as another of Negan’s public sacrifices. Begging Eugene (Josh McDermitt) for something she could use to slit her wrists was clearly a ruse, but she probably wasn’t lying about her fears that Negan will use her to hurt her comrades if she remains his prisoner. These scenes are emotional and suspenseful, thanks to Martin-Green and McDermitt’s nuanced performances and some of the episode’s most artful staging. Slovis removes any lingering doubts about Eugene’s state of mind by staying with him on one side of the metal door while Sasha pleads for a blade, close enough to show the empathy in his eyes, which softens the customary rigidity of his expression. And when the camera finally shifts to Sasha’s side of the door as Eugene agrees to bring her a weapon, the sight of her tear-free, satisfied face lands as a triumphant surprise.

Speaking of Eugene, I guess I should have trusted my initial instincts about him, since he appears to have caved in pretty thoroughly to Negan. At least his loyalties are divided enough that he gave Sasha the poison he wouldn’t entrust to Negan’s wives in “Hostiles and Calamities,”. Poison wasn’t the weapon Sasha had been hoping for, as Martin-Green’s affecting tears make clear, but chances are she’ll find a good use for it.

The best news for the looming battle with the Saviors, though, is the surprise that Rosita (Christian Serratos) springs at the end of “Something They Need.” It may take Daryl a while to calm down enough to see just how valuable Dwight (Austin Amelio) can be as an ally, but the faceoff between those two is another reminder, like the reflection of Dwight on his bike in “Hostiles and Calamities,” of how much they have in common. Dwight’s knowledge of Negan and the Sanctuary will surely come in handy too. Let’s just hope his spotty memory doesn’t make him forget whose side he’s on.

The Americans Recap: Season 5, Episode 4, “What’s the Matter with Kansas?”