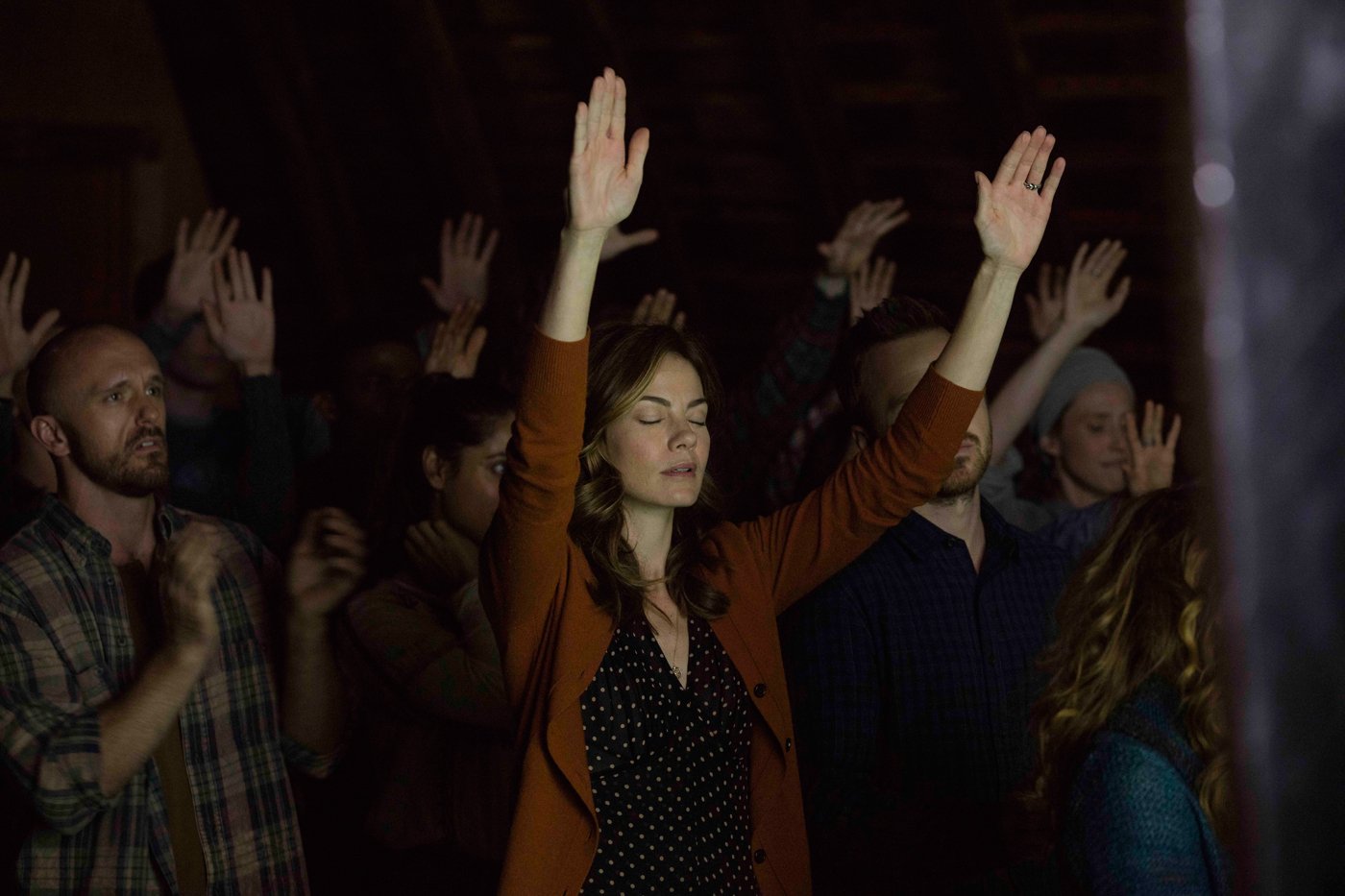 About halfway through The Path, Sarah Lane (Michelle Monaghan), a higher-up in the cult-like Meyerist Movement, breaks into the home of a loved one with whom she’s estranged due to her dedication to her faith. As she strolls through the silent hallways and rooms of the large apartment, one can feel, as Sarah looks at family photos, trinkets, and leftovers in the fridge, the immense weight and resonating pain of this person’s absence in her life. This is, sadly, one of the few potently memorable moments in the Hulu series, which tracks Sarah’s husband, Eddie (Aaron Paul), and his loss of faith in Meyerism and its charismatic leader, Cal Robertson (Hugh Dancy), his good friend and Sarah’s former flame. Given how the show’s dramatic arc leans on a litany of pretty but empty talk, this sequence is conspicuous for its silence.

The Path begins with Eddie already suspicious of his faith, following an encounter with a defector and his own personal revelations about the group’s leadership following a trip to a healing center in Peru. In the episodes that follow, a great deal of the dialogue centers on his uncertainty in relation to whether or not to defect himself. It’s a big decision, to be sure, but the writing offers little in the way of nuance or original ideas each time Eddie is volleyed back and forth between the spiritual and philosophical certainty of Meyerism and the depressing yet liberating instability of “the real world.”

For all the talk of the importance of faith, its power, and its social good, The Path doesn’t feel the need to work out these ideas and the characters’ feelings through visual means beyond a handful of dream sequences. The series defaults to the kind of sober-eyed style that suggests realism and urgency, but the narrative itself fails to provide corresponding thrills or any measure of gripping tension. While Cal struggles with the growth of his movement, Sarah and Eddie’s son, Hawk (Kyle Allen), begins to fall for Ashley (Amy Forsyth), a girl at his public school, all while his parents’ marriage is shaken up by Eddie’s increasing lack of faith. Though not without an ample yet familiar dramatic weight, these plot turns define the characters rather than the other way around, and rare is the scene where the messy, confusing inner lives of these people is given palpable and three-dimensional shape.

There are times when Dancy is thoroughly unsettling in conveying his character’s newfound lust for his godly power, as when Cal’s devotion becomes more aligned with the popularity of his movement than his own personal faith. But in such moments, the sense of character detail that’s otherwise not extended to filling out the inner dimensions of the character and the other Meyerists becomes more apparent. The Path is unfortunately content to focus on a variety of rote melodramatic byways that give little insight into the fight between faith and personal desire, or the psychological relief and societal bliss that believers expect from their chosen religions. There’s ultimately no sense here of what makes such belief systems so enticing to their followers, and to the point that people would sacrifice friends and family members in their pursuit of the promises of the next world.