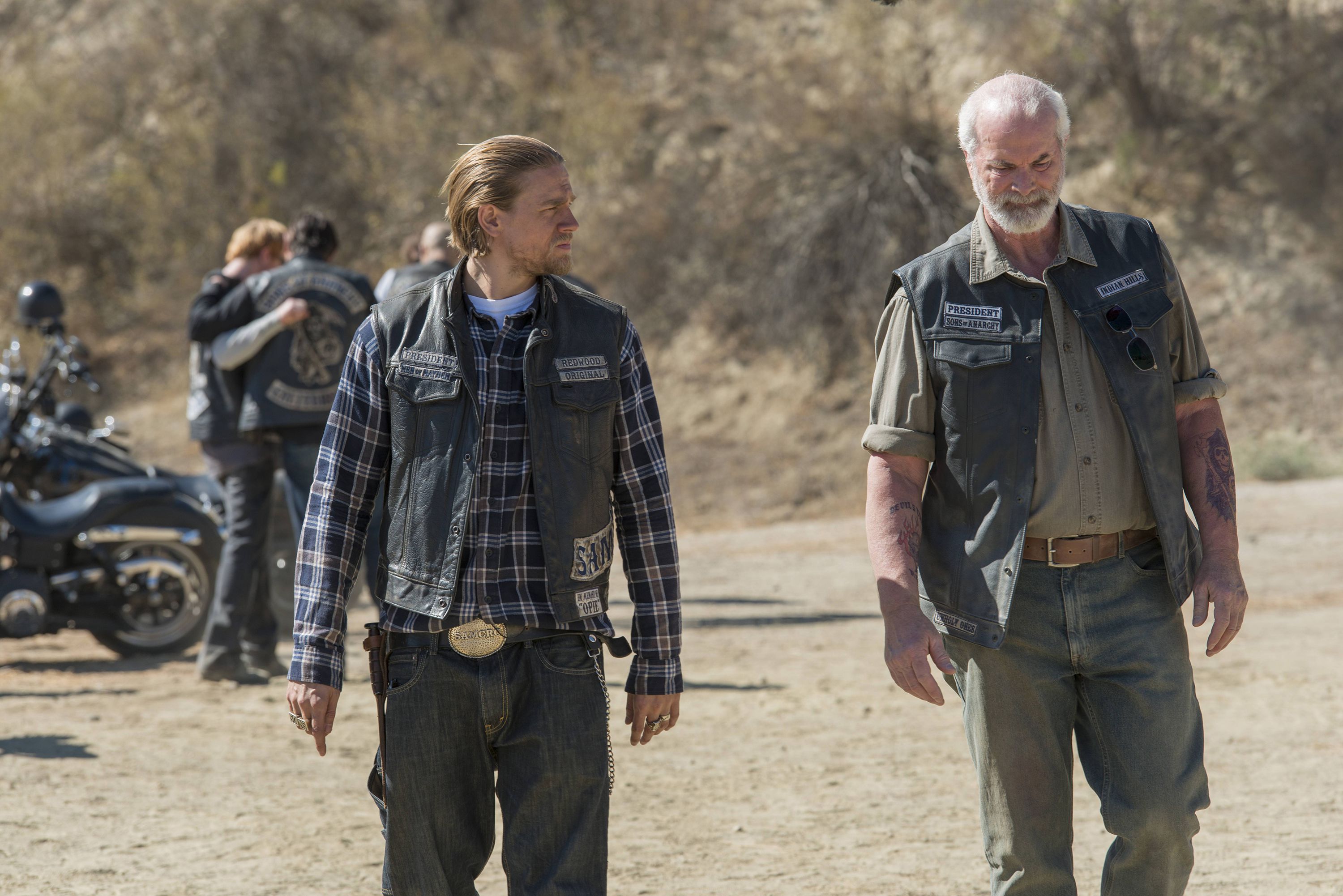 Coming on the heels of “Greensleeves,” in which Gemma’s (Katey Sagal) confession of murder was overheard by her lobotomized-looking grandson, Abel (Ryder and Evan Londo), and Bobby’s (Mark Boone Junior) sudden capture led to forced optical surgery, “The Separation of Crows” seemed primed for further shocking developments. Strangely, the episode merely rehashes much of the same ground, biding time until the bloody series finale and leaving viewers in a state of disorientation.

Jax Teller (Charlie Hunnam) spent many a contemplative hour on the roof of his family’s compound during the maiden episodes of Sons of Anarchy’s first season. The opening moments of “The Separation of Crows” once again finds the young warrior sequestering himself at a high vantage point overlooking the Stockton docks, hoping to gain a newfound perspective on what’s become a complete shit show for his gang and family. During a candid and moving conversation with Chibs (Tommy Flanagan), Jax admits what was already painfully obvious: He underestimated August Marks (Billy Brown). “How could I not see this coming?” he wonders.

As an aching instrumental version of “All Along the Watchtower” dances on the wind, the narrative jumps from Jax’s outdoor brooding to various other parties mired in doubt: Gemma and Nero (Jimmy Smits) continue to help the drugged-out pastor’s wife and her son at the Teller family cabin without knowing why, Wendy (Drea de Matteo) finds Abel alone in his bedroom drawing a disturbing picture, Juice (Theo Rossi) begrudgingly sets his assassination plans in motion behind bars, Wayne (Dayton Callie) surveys the burnt-out structure that used to be the SAMCRO clubhouse, and Bobby sits in the shadows of a dank cell resisting the threats made by Marks’s lead henchman, ex-Blackwater graduate Moses Cartwright (Mathew St. Patrick).

With uncertainty and desperation spreading like a virus among them, these characters are finally starting to realize that time is running out on survival. The only one who isn’t flinching is Bobby, an old-school badass who counters Moses’s “it’s-not-personal-it’s-just-business” speech about violence with his own pithy retort. Marks may have made an egregious mistake by trying to leverage the iron-clad Bobby for Jax’s inside information, namely the location of the pastor’s rotting corpse and his stricken wife and son. More amputations are promised, but it’s a fact that hits SAMCRO members much harder than the scruffy gladiator who must endure the torture.

Throughout the last few episodes, young Abel has wielded a knife, thrown multiple temper tantrums, and displayed various other violent tendencies that are cementing his future as a sociopath. In “The Separation of the Crows,” he raises the stakes by smacking a fellow student with a metal lunchbox, drawing the ire of a concerned teacher (Courtney Love) who gets a shotgun blast of Gemma’s charm for her troubles. How the Abel situation plays out will largely determine the success of this final season, but as of now series creator Kurt Sutter has hit a wall, favoring the obvious over a more nuanced and frightening window into Abel’s descent.

Meager breadcrumbs are dropped in the thread involving Juice and his quest to win back the affections of SAMCRO by murdering Henry Lin (Kenneth Choi), who’s currently being held in isolation at Stockton prison. Meeting with Sheriff Jarry (Annabeth Gish) and Wayne to confirm a plea bargain that will send him Lin’s way, Juice promises evidence against the club in return for a transfer. Wayne smells the funky stench of Juice’s plan a mile away, setting the stage for his suspicions about Gemma and her accusations that Lin killed Tara (Maggie Siff).

Marks’s kidnapping of Bobby has left Jax even more paranoid than usual, heightening his search for the informant who dished to Lin about SAMCRO’s secret guerilla tactics. The investigation leads the core gang members to a survivalist ranch where a family of gun-running rural trash (who’s ornery matriarch is played by Dale Dickey) reveals the identity of Jax’s leaky sieve. Even the least attentive viewer already knew that Jury (Michael Shamus Wiles), the president of the Indian Hills chapter of SAMCRO, was probably the rat. But when Jax confronts Jury, this assumption becomes complicated by his vehement denial of the betrayal; he takes the brutal way out and shoots Jury down in broad daylight, a rash action that further perforates his role as a leader the least bit interested in strategy.

During the final moments of “The Separation of Crows,” we get a sense of the episode’s wrenching motif of desecration. Gemma arrives home to a passive-aggressive threat from Abel and to find her pet crows disemboweled, left under her covers for maximum effect. Juice waits in his cell and crushes a cockroach, spreading its guts around with his fingers. Finally, Moses makes good on his promise and cuts off the fingers of Bobby’s clutch hand, delivering them to Jax in a small box. Never one to shy away from obvious symbolism, Sons of Anarchy states its thesis very clearly in “The Separation of Crows.” No one deserving will be afforded an easy death.

Doctor Who Recap: Season 8, Episode 10, “In the Forest of the Night”