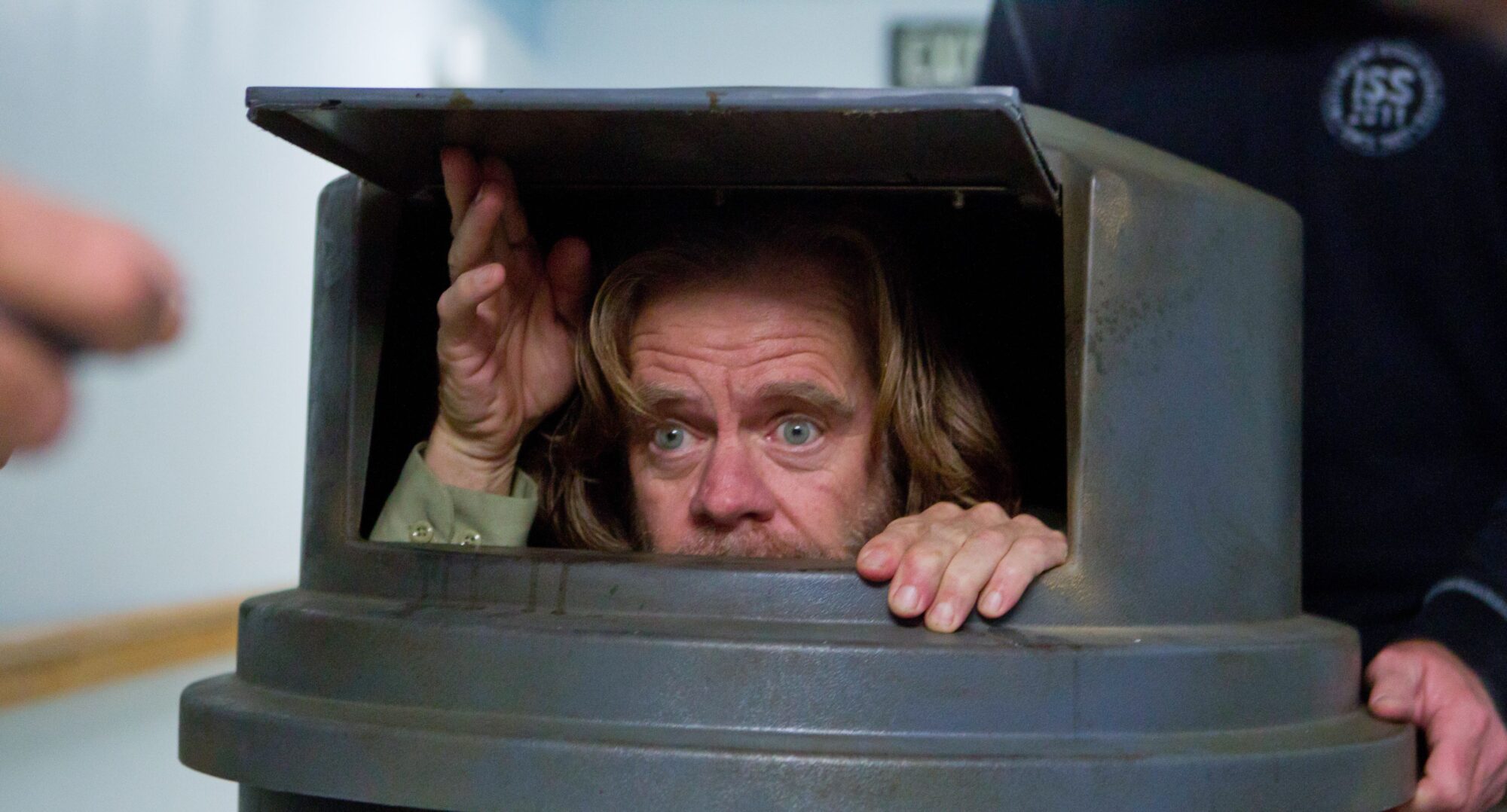 The second season of Showtime’s aptly titled Shameless often feels less like a new season and more like a sequel, in which the major players remain the same, but the volume is amplified and the ante doubled. Granted, one expects to see the stakes raised to a certain degree, but at first glance all of the major characters come across as such cartoonishly exaggerated versions of their former selves that they’re downright difficult to recognize. Deadbeat patriarch Frank Gallagher (William H. Macy), for instance, has never exactly been television’s most upstanding citizen, but the absurd new lows he goes to in his character-defining quest to secure a free ride come hard and fast this season, with barely half an episode passing before he gives up his infant child in a drunken barroom bet, then gives a roomful of slovenly drunken men blowjobs in a filthy bathroom stall in order to raise a little money.

The rest of the clan now operates a full-fledged child labor ring, in which precocious preteen Debbie (Emma Kenney) runs a daycare ostensibly supervised by Fiona (Emmy Rossum), who instead spends the day sleeping off a night of waitressing in an upscale nightclub. Meanwhile, Kev (Steve Howey) puts the agricultural skills of his former-cultee foster daughter to use in a massive grow operation, the product of which he and Lip (Jeremy Allen White) sell to teenagers in the park out of a dilapidated ice cream truck. Even cursory characters like Fiona’s party-fiend friend Jasmine (Amy Smart), who’s become little more than a coke-addled adultress, can’t escape the universal regression.

Wouldn’t the aggregate of these operations actually be fairly lucrative? Never mind the fact that one would think Lip, who has scored multiple perfect SAT scores and is being headhunted by the Pentagon while still in high school, could earn more money tutoring than selling drugs and managing teenage combatants in underground fight clubs. Every plot development seems designed solely to raise the show’s sensationalist appeal, to the point where one can’t help but feel a sense of ironic self-awareness when Ian (Cameron Monaghan) pokes fun at TLC’s trashy programming.

But while it’s easy to marvel at the show’s abilities to regress a bunch of characters that, really, hadn’t made much progress last season anyway, it actually turns out there’s a reason for the differences in the clan this season: These are the summertime Gallaghers. With the kids home from school and ready to pitch in, the family is gathering as much as they can before winter arrives again. Their earnings are even collected in a tin can called the “squirrel” fund, emphasizing the raw, animalistic way in which the family operates, doing whatever it takes to get by. In season one we watched the characters trying to survive on the little they had managed to grab for themselves; now we get to see what they’re like in acquisition mode, using summer as an opportunity to cut out a larger piece of the pie for themselves.

Season two seems to hint at an exploration of the moral consequences of an ingrained whatever-it-takes attitude once opportunity starts to arise. Fiona worries she’s turning the children into antisocial sociopaths and deals with the consequences of sleeping with a married man and lifting the cash out of a purse she found on the subway. Lip can’t seem to separate his relationship with Karen (Laura Slade Wiggins), who he’s lost to a new, incredibly well-hung guy (this is Showtime, after all), from his general attitude of using his intelligence and problem-solving skills to take whatever he wants.

It’s easy to give Shameless the benefit of the doubt, because, at its best, the show is a lot of fun (try not to laugh when Frank attempts to threaten a man named Kermit by crushing a pickled egg). The cast is uniformly great, and many of the characters are quite compelling, even Lip and Ian. But like Frank Gallagher himself, Shameless is also prone to some really stupid antics. And maybe this is to be expected from an unabashedly sensationalistic series, but that’s not a defense for some of its most ridiculous and crass plot points. When, toward the end of last season, an Oxycontin-riddled Frank allows himself to be seduced by his girlfriend’s teenage daughter, there’s actually enough humanity left over for the viewers to care about the emotional fallout. This season, Frank commits much worse crimes, seemingly becoming unconcerned with actual human life, and it’s played off as a joke. This is fine if Shameless is only concerned with constantly one-upping itself, but it undercuts the show’s attempts at becoming anything more meaningful.

Review: House of Lies: Season One