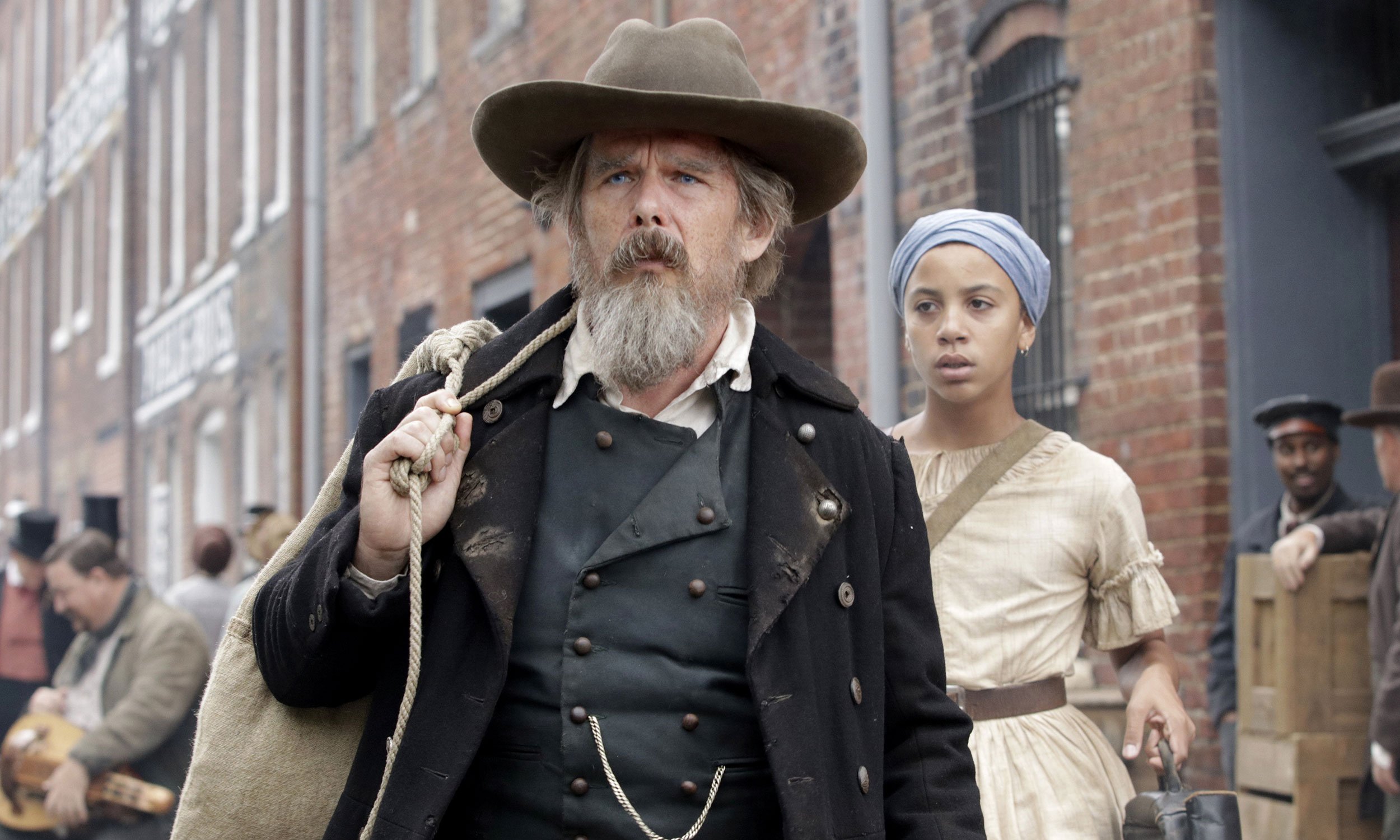 As abolitionist John Brown, a wild-eyed and scraggly bearded Ethan Hawke spends much of Showtime’s The Good Lord Bird—based on James McBride’s National Book Award-winning novel of the same name—shredding his throat as he bellows for the end of slavery. The man’s fury is biblical in both a metaphorical and textual sense, dribbling spit down the hairs of his chin as he declares slavery an affront to God while fervently quoting the Bible. Brown doesn’t want to negotiate, nor does he want to begin an incremental process toward change: Black people must be freed now, or else he’ll shoot—and often he does.

To a young black boy like Henry Shackleford (Joshua Caleb Johnson), Brown’s actions are baffling. Henry has witnessed white anger before, but he hasn’t seen it deployed on his behalf. As such, he regards it with no small degree of skepticism, not least of which because one of Brown’s outbursts gets the boy’s father killed. Newly free but with nowhere to go, Henry travels with Brown’s tiny militia, acquiring the nickname “Onion” for eating a withered good-luck charm belonging to “the old man.” He’s also given a new way to present his gender, courtesy of Brown mishearing Henry’s name as “Henrietta” and thus taking him for a girl, giving him a dress, and treating him like an adopted daughter. Onion plays along, without making a fuss. After all, it’s hard to dissuade white people once they’ve decided who you are.

In addition to these “gunfighters of the Gospel” who take arms against slave owners and the institutions that enable them, the world of The Good Lord Bird is full of hypocrites and apologists. It also practically oozes with wry, dark comedy. But rather than play Onion’s dilemma as an unsympathetic farce, the series uses gender as an earnest metaphor for how the others see him—or rather, don’t. Where he may freely be himself among the black characters, who recognize what Onion calls his “true nature” just fine, the white characters force their own perception upon him even when they have the best of intentions and are ostensibly fighting for him and his people. To them, little Onion sometimes functions like a mascot.

Johnson adeptly modulates the series’s tone, with his expressions of confusion and skepticism woven into the heart of the narrative. But the showiest role belongs to Hawke, who goes big and loud in his fanatical conception of Brown, a man who does things like drag out suppertime prayer for hours and is thankful for everything that comes to his mind. He speaks to a turtle, places a pocket change bounty on the president, and generally believes that his battle plan has been handed down by the Lord Himself, even if the details tend to be fuzzy.

Brown, though, is also unambiguously right about what must be done, that the sins of the land must be washed away in blood. His capacity for violence is startling, as in one scene where he and his followers drag a man out of his home to cut off his head due to his complicity. Any blood, it seems, will do, and it’s certainly easy to imagine another context where another person like Brown points his fanaticism and violence in another direction. He’s prone to speaking for black people, to making decisions on their behalf about what they want or need while blind to the complexities of what it means to be free in a country that considers black freedom a threat. Brown’s moral simplicity is its own kind of privilege.

Reservations about Brown are voiced by Onion, who acknowledges the potential “white savior” narrative in the first episode, as well as by others like a reluctant, newly freed recruit named Bob (Hubert Point-Du Jour) and even the renowned Frederick Douglass (Daveed Diggs). But The Good Lord Bird doesn’t indulge in the easy cynicism that might have posited Brown as merely out for himself; his shortcomings and violence share space with his earnest devotion to the cause, his generosity, his willingness to listen, and his overall kookiness. This is hardly a hagiography, the off-kilter tone allowing for refreshingly complex portraits of not just Brown, but a rather stuffy conception of Douglass, whose apprehensions make sense but whose place within society and all the eyes upon him often restrict his public actions.

Where Onion’s perspective is concerned, the series is a little shakier. With his presence at so many major events, he comes perilously close to a Forrest Gump of the antebellum era, the wheels of the plot contriving to deliver him at meetings with Douglass and Harriet Tubman as well as Brown’s raid on Harpers Ferry. Though his presence is meant to complicate Brown’s actions through how he’s still perceived as a young girl, the series’s skepticism gradually melts away, leaving the final episodes to drag a bit as they focus more on constructing their vision of history rather than examining the characters and their ideals. But when it works, especially at the start, The Good Lord Bird invigorates its material with the rousing trappings of a semi-comedic western that gives it a particularly memorable sort of power.

Review: Season 3 of Star Trek: Discovery Remains Stuck in the Future’s Past

Review: Fox’s Next Is an A.I. Thriller That Lacks Self-Awareness