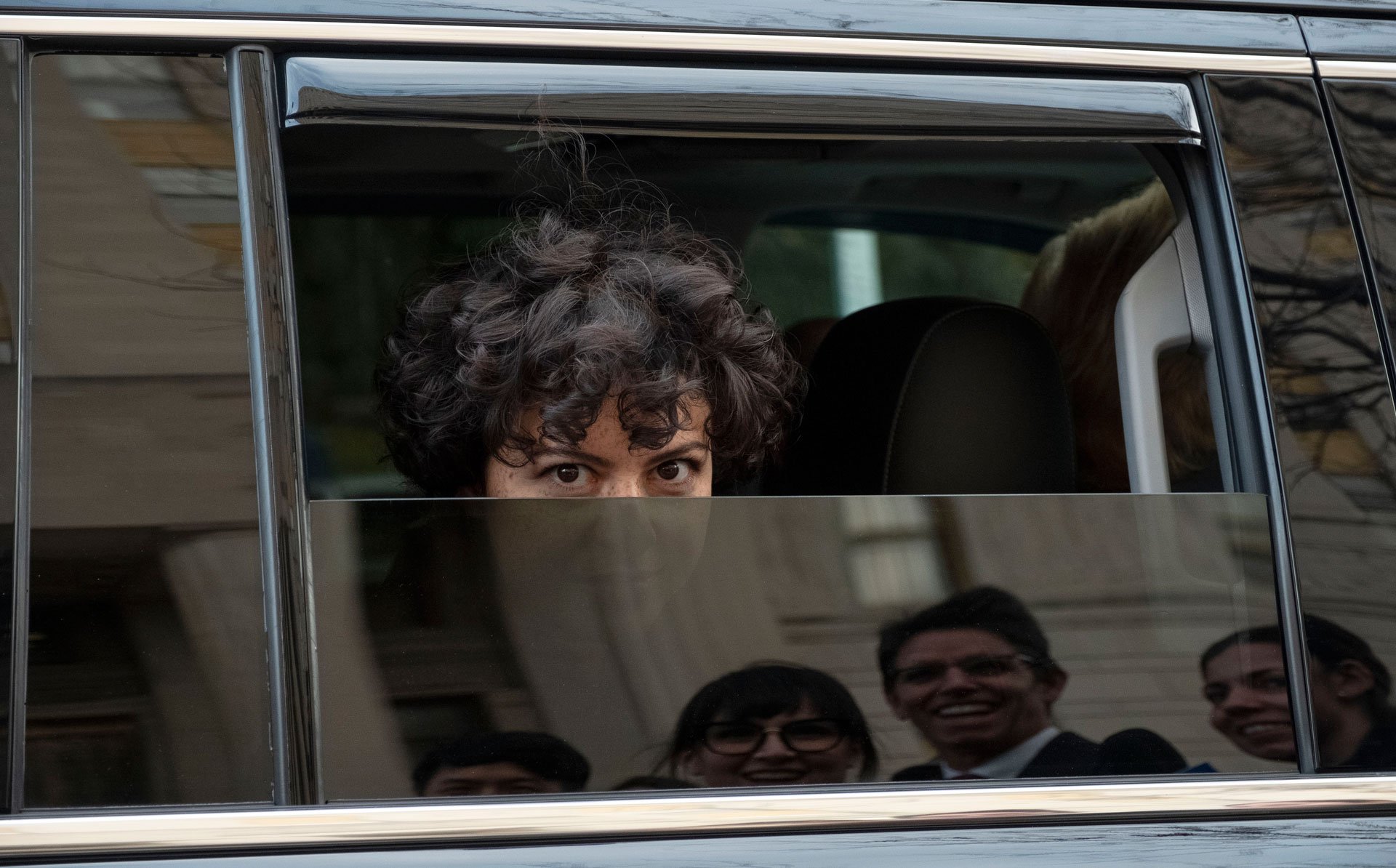 The third season of Search Party, the exceptionally nimble dramedy created by Sarah-Violet Bliss, Charles Rogers, and Michael Showalter, returns after a hiatus of two and a half years but begins right after the events of the second season’s finale. Dory (Alia Shawkat) has just been arrested for the murder of her quasi-associate and ex-lover, Keith, and as a cop takes her mugshot, she chuckles at something he says—resulting in a beguiling portrait of Dory, wearing dark red lipstick, with one eyebrow raised and a roguish half-smile fixed on her face.

The ever-ravenous press and public latch on to Dory’s mugshot, turning her and the legal case against her and her boyfriend, Drew (John Reynolds), into a national spectacle. The series, in turn, takes a gripping dive into Dory’s psyche, sharply revealing how her place in the spotlight magnifies her anxieties. In contrast to the defining visual of Search Party’s first two seasons—a tracking shot of Dory, which prioritized her reactions and impressions over the stimuli eliciting them—season three often depicts her in faux news reels and talk-show clips. Rather than centering Dory as she moves through the world, these sequences freeze her in a still image, embodying her objectification at the hands of the media frenzy. The alienation she feels as tabloid fodder eclipses what she once felt as an aimless personal assistant.

But Dory is far from powerless, as she’s remarkably adept at steering the narrative of both her life and the trial. One of her most formidable feats is a television interview alongside her estranged parents (Jacqueline Antaramian and Ramsey Faragallah), which successfully presents the illusion of a unified front. And she seems to like the attention, as when she humors the paparazzi posted outside her apartment, or when she melodramatically regales the partygoers encircling her at a friend’s wedding with tales of fame’s woes.

Search Party’s earlier seasons found joltingly dark humor in the absurdity of four clueless, sheltered, relatively young adults playing detective and then committing and covering up a murder. This season rivals its predecessors in its intoxicating blend of bleak cynicism and irreverent comedy, but embraces a more exaggerated, madcap sensibility. Recognizing that court is an inherently theatrical space—and a magnet for outsized personalities—the series drops Dory down the rabbit hole and surrounds her with near-unbelievable weirdos. Bob (Louie Anderson), Drew’s lawyer, spouts a wonderful blend of banal aphorisms and pulpy zingers. “Oh, this city,” he drones upon arriving in New York from Chicago, “so much chaos out there.” And Bob is joined in court by two other similarly odd and hilarious attorneys: Cassidy (Shalita Grant), Dory’s rookie lawyer, and the overzealous prosecutor, Polly (Michaela Watkins). The trial, shepherded as it is by a trio of clowns, drives the season’s tonal shift as it quickly devolves into a circus-like farce of shoddy evidence and shaky testimonies.

Dory and Drew’s friends Elliott (John Early) and Portia (Meredith Hagner) are back, but where past seasons deepened their outwardly shallow personalities, this season frequently relegates them to inconsequential, if funny, subplots. The treatment of Portia is particularly disappointing: Previously, a surprising acuity flickered within her, but the series tosses that potential nuance aside, doubling down on the ditzy obliviousness at her surface.

Ultimately, though, the simplicity of the non-Dory narratives is of a piece with the trajectory that Search Party has outlined over its run thus far. The series is Dory’s story, told in an obsessive manner as befits her swelling narcissism. And the strangeness of the trial hints, perhaps, at the world as seen through Dory’s eyes—and as tinged by her growing delusion. Dory is prone to hallucinations and fantasies, and her mental state only worsens under the psychological toll of the trial. At one point, Drew wonders if Dory’s claims of innocence are just a legal strategy, or if she really believes that she didn’t do anything.

And she’s still keeping her greatest secret—that she killed April, the neighbor who knew about Keith’s murder—but Drew is on to her. That Dory remains at least slightly sympathetic throughout all this is a testament to the subtle expressiveness of Shawkat’s performance. Dory’s torn emotions course through Shawkat’s face; the character’s survival instincts flash in her eyes when she’s cornered, when her control of situations starts to falter.

Rare are the moments, however, in which Dory’s power is truly at risk of slipping. One of the season’s most striking shots embodies her insidious influence on those around her. Dory, Portia, and Elliot sit and lie down in a line, playing with each other’s hair; Dory combs Portia’s while Portia runs her fingers through Elliott’s. Drew is opposite them, on the couch. They’re all quiet, thoughtful, reflective. But Dory, with Portia’s hair in her hand, resembles a puppet master. As the camera slowly zooms out, the moody electronic soundtrack kicks in, an echo of Dory’s unceasing calculations. Aspects of the blocking recall Michelangelo’s The Creation of Adam: Drew’s no God, but Elliot stretches out like the first man—and Dory is behind both him and the woman closest to him, plotting, the serpent just off-canvas.

Review: HBO’s Perry Mason Examines Power and Faith Amid a Fog of Decay

Review: Hulu’s Love, Victor Is a Likable, If Timid, Exploration of Sexual Identity