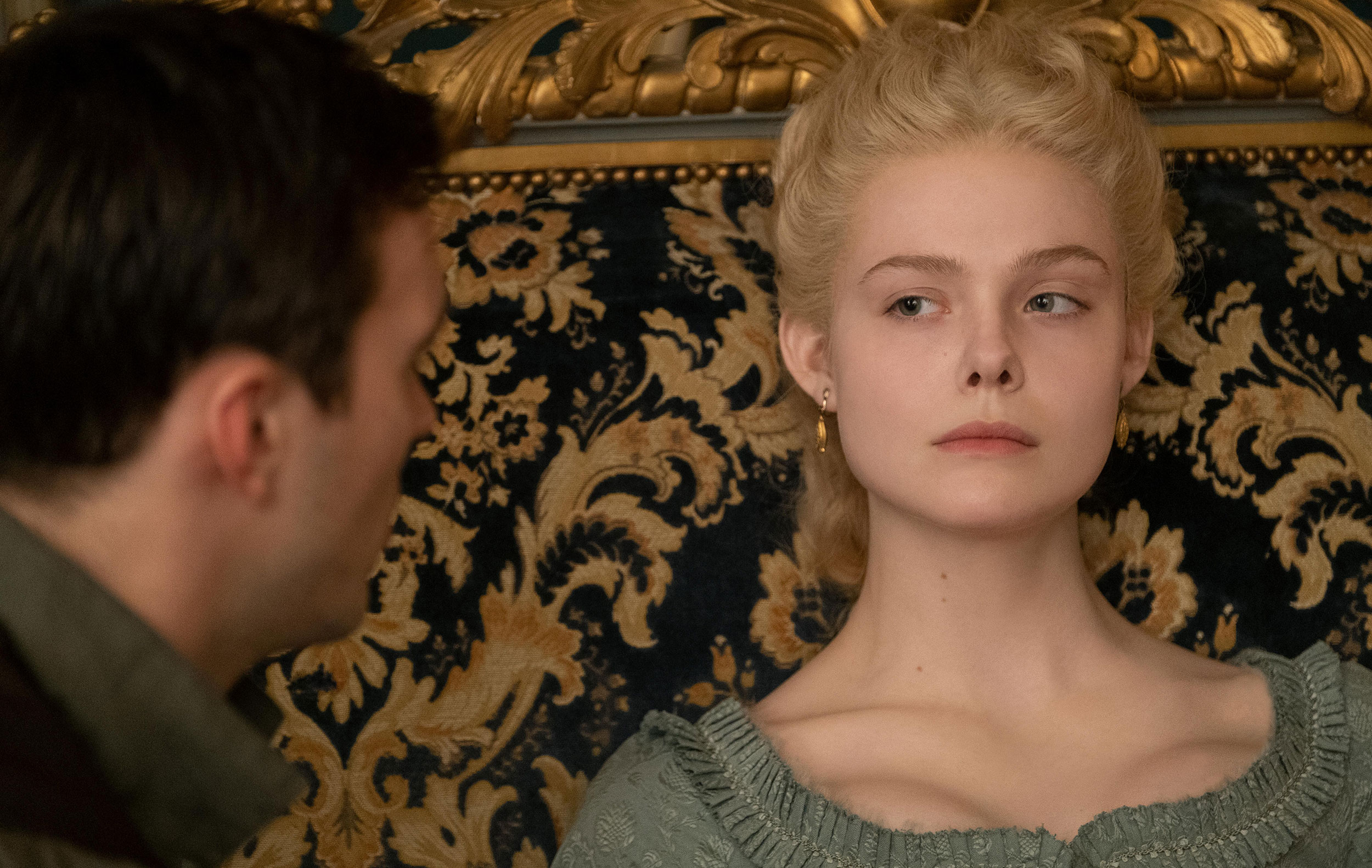 Tony McNamara’s alternately riotous and poignant Hulu miniseries The Great begins with the future Catherine the Great (Elle Fanning) leaving Austria for Russia to marry the country’s emperor, Peter (Nicholas Hoult). Catherine wants to bring the Enlightenment to her new home—to abolish serfdom, proliferate literacy, and embrace art and science—but Peter is a doltish man-child more interested in philandering than leading. His governing style is self-serving and myopic; for one, he refuses to pull Russia out of its disastrous war with Sweden, as he’s desperate for a victory akin to those of his late father, Peter the Great. What little progress the young Catherine makes in reforming Peter is fleeting, and because she’s confident that she’s destined to save Russia, she plans a coup.

Like Yorgos Lanthimos’s The Favourite, which McNamara co-wrote and features Hoult in a supporting role as a sycophantic politician, the series rejects the commitment to historical fact that burdens many period pieces. Catherine channels the empress’s ambition and relatively liberal bent, but the characters around her are composites and fabrications; Peter, for instance, is only loosely based on Peter III, and provides a vehicle for Hoult’s unnerving blend of youthful earnestness and wanton cruelty. This historical freewheeling feeds into The Great’s broader irreverence, which comes through in every jarringly crass line coated in period-drama affect—like when Peter tells Catherine, over a meal, that he’s set on producing an heir. “I’d do it now, but I just blew my bag on Madame Dimov,” he says, causing Catherine to nearly choke on her food. “My God,” she says, “a phrase I have never heard.”

The delectably off-kilter dialogue highlights Catherine’s alienation. She first arrives to court a naïve idealist, prim and proper, but as she develops into a skilled politician, she demonstrates growing comfort navigating the crudeness surrounding her. She eventually attempts to win over Grigor (Gwilym Lee), Peter’s best friend, who can’t stand the emperor’s dalliance with his wife, Georgina (Charity Wakefield). “He eats fruits various from your wife’s cunt on a daily basis,” Catherine says to Grigor, egging him on. Grigor’s eyes bulge and his jaw clenches. It’s an almost revelatory moment for Catherine in her quest to wield a less bloody sort of power.

Catherine’s co-conspirators initially consist of Marial (Phoebe Fox), her maid, who hatches the scheme; Count Orlo (Sacha Dhawan), an influential but meek bureaucrat in Peter’s inner circle; and Leo (Sebastian de Souza), the compassionate and winsome lover gifted to Catherine by Peter in accordance with the court’s libertine ethos. These characters contextualize Catherine’s idealism and innocence. Where she’s eager to take the throne and launch her virtuous reign, they recognize that deposing an emperor is slow and messy business.

One of the central elements of Catherine’s political education is figuring out how to seize power as a woman in a thoroughly misogynistic environment, one filled with oafs such as the frequently drunk General Velementov (Douglas Hodge), who’d rather try to seduce Catherine than hear about her ambitions. Catherine and Marial commiserate about the sexism they face, but their discussions expose Catherine’s ignorance of how class difference shapes their distinct experiences. These interactions subtly and effectively cast doubt on Catherine’s claims of readiness by showing that her lofty goals of egalitarianism are far clearer to her than the nuts and bolts of classism, let alone the complexities of ruling an empire.

Catherine’s blind spots come to a head when she addresses a room full of powerful men at a time of profound uncertainty. It’s a crucial opportunity to win their respect, but she flounders: Her instincts are off, she knows nothing of Russia, and the men spurn her. Fanning deftly embodies Catherine’s distress as the character’s sense of self shatters, her breaths turning into gasps and her dreams of leading Russia slipping through her anxiously fidgeting hands.

Catherine’s true exemplar at court is Elizabeth (Belinda Bromilow), Peter’s bohemian aunt, who largely shares her progressive politics. Elizabeth is totally unconcerned with what others think about her, and while her boldness can feel unremarkable given the cushy position she occupies at court, it’s marvelous to witness. She airs her perspective most compellingly in scenes with “Archie” the Archbishop (Adam Godley), who represents the church and abhors Catherine’s humanism. The pair are two of the The Great’s sharpest minds, and their absorbing conversations spill tantalizingly into blasphemy and treason, as when Archie floats the possibility of Elizabeth replacing her nephew on the throne.

As for Peter, he tries to better himself under Catherine’s influence—unbanning the printing press, holding art and science fairs—and he shows signs of sweetness, but nothing sticks. The series elucidates his behavior with sympathetic reflections on his inner workings. Peter lives in the shadow of his late parents, suffocated by his father’s outsized legacy and scarred by his mother’s disdain. In one of The Great’s most stirring moments, a shot of Catherine and Leo kissing by firelight cuts to a dark room and pans to reveal Peter curled up on a statue of his father. Such sequences stop short of excusing Peter’s vileness, but they do render his arrested development more tragic than laughable. They also make the tension nestled in the series’s title increasingly plain: Great is both what Catherine will become and what Peter will never be.

Review: HBO’s I Know This Much Is True Is an Unrelenting Catalog of Tragedy