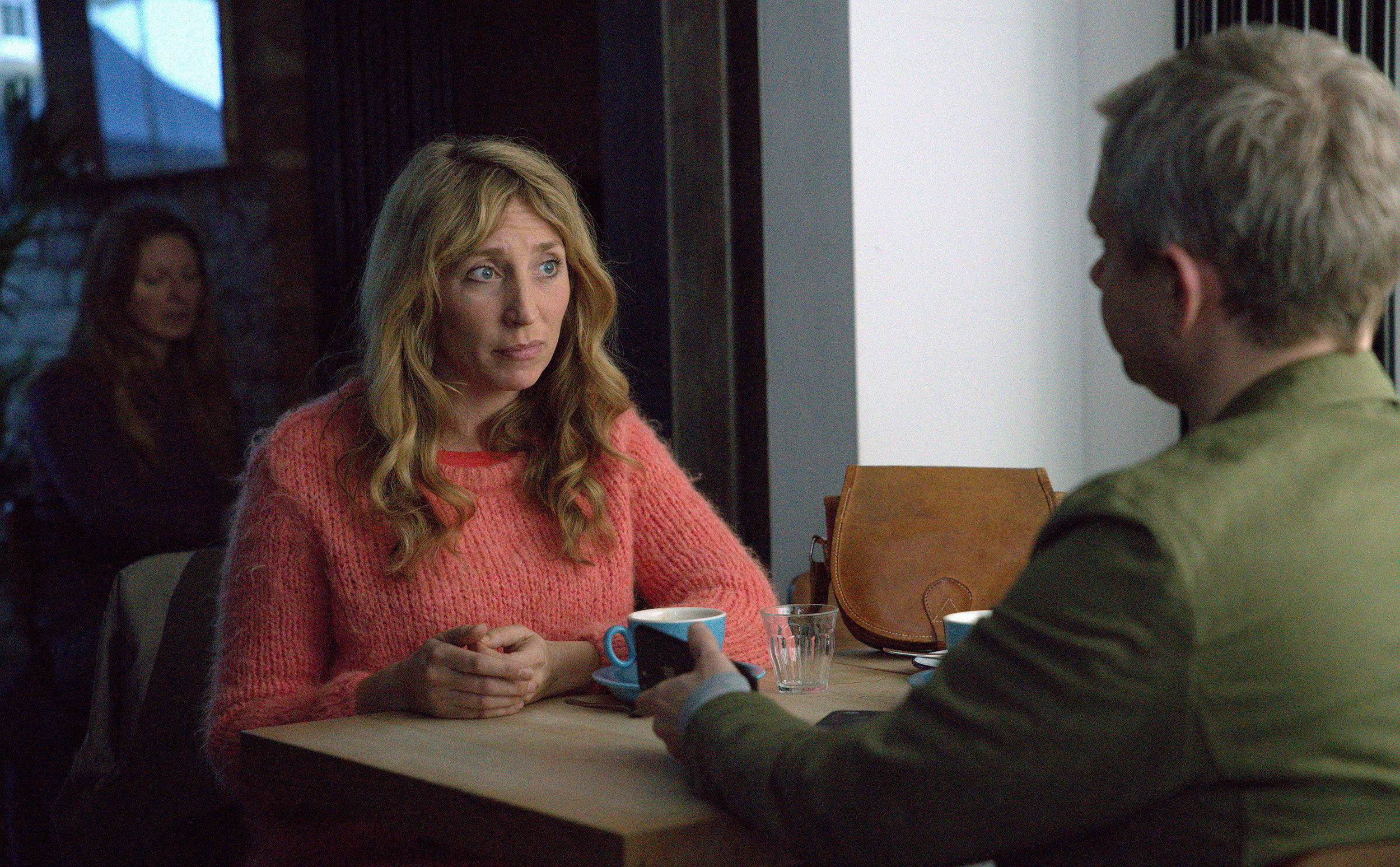 Throughout FX’s Breeders, golden-hued flashbacks contrast the idyllic past of Paul (Martin Freeman) and Ally (Daisy Haggard) with the couple’s present, an epoch marked by the din of their sweet, utterly exhausting children: seven-year-old Luke (George Wakeman) and four-year-old Ava (Jayda Eyles). Paul and Ally used to wake up with giddy energy, eager to call out of work in order to stay in bed together. Now they start the day defeated, having barely rested after soothing Luke’s nighttime fears of being burned or burgled to death. Which is to say that, for Paul and Ally, parenthood has meant giving up a great deal of things—not just sleep, but also romance, liberty, and impulsivity, to name a few.

The series, co-created by Simon Blackwell, Chris Addison, and Freeman, primarily deals in dark comedy, with much of its humor stemming from Paul’s often vitriolic parenting style. Where Ally is cool and lighthearted, Paul suffers from an especially quick temper: When the kids are too loud for too long, he shouts at them with riotous zeal that he instantly regrets. Paul’s outbursts are hilarious and relatively rare. More common are his equally funny, gentler rejoinders to the kids. Freeman skips the beats that usually separate stimuli and responses, making each yell and hiss feel particularly authentic and acerbic—like when Luke asks to go home while Ally sobs at a deceased pet’s burial, and Paul urges him to “sense the tone.”

Paul’s and Ally’s behavior is contextualized by the presence of their own parents, who weave in and out of the show’s episodes. Ally, for one, both channels and rejects the parenting methods of her itinerant father, Michael (Michael McKean), who was absent in her youth but whose beatnik chill we recognize in her calm and unwavering devotion to her children. Elsewhere, Paul’s parents—the endearingly foul-mouthed Jackie (Joanna Bacon) and Jim (Alun Armstrong)—are regular springboards for his ruminations on life. In conversations with them, he wonders if the elementary school he went to led to his uninspiring career and if his father’s approach to discipline inescapably shaped his own.

The latter line of thought comes to a head when a doctor expresses her concern about Luke’s oddly frequent accidents (he fell down the stairs this time), forcing Paul to face the possibility that he’s abusive. Paul’s resultant introspection misses the mark by a bit: Instead of reconsidering his verbal tirades, he ponders whether he could be hurting his kids by subconsciously creating an environment rife with potential slips and trips and batterings. The series takes this sequence seriously, and initiates a compelling tonal shift from grim humor to pensive reflections on trauma and psychology. Though Paul and Ally face the risk of governmental intervention in their family, the predicament does little to change Paul’s parenting—an acknowledgment of the near impossibility of change, or of the way that one’s upbringing can permanently shape one’s inner circuitry.

With the abuse arc and other storylines, the series grows increasingly capacious over the five episodes made available to press. It moves from the clamorous frenzy of its opening scene—in which Paul goes on one of his most extreme and delightful screamologues—to more tender examinations of characters and relationships. Flashbacks begin to not only explore the myriad repercussions of childbirth, but also touch on quotidian interactions between Paul and Ally, and between each of them and their parents—the exact kinds of unexceptional moments in life that tend to linger when one’s memory stretches years into the past. In addition to lending a striking layer of poignancy to the series, these flashbacks add nuance to Paul’s and Ally’s inner lives. Despite Paul’s apparent lack of growth, he truly does try to be better, and despite Ally’s nonchalance, she does have fears and regrets and hang-ups.

This fleshing-out is crucial given Paul and Ally’s place at the core of Breeders. Their relationship is the show’s unifying thread, cutting through time and tone. The audience observes the couple in multiple phases and modes: blissful courtship, childbirth, acute grief, grief-induced horniness. Haggard and Freeman’s lightning-strike chemistry fuels their supersonic banter and warm, softer exchanges. Perhaps most charming are the instances in which Ally teases Paul, homing in on a deep and undeniable flaw, and Paul smiles in full recognition of how right she is, then and always. Such moments are reminders that these two could never really hurt each other—not even by damning themselves to parenthood.

Review: Little Fires Everywhere’s Study of Race and Class Is Doused in Melodrama

Review: The Trials of Gabriel Fernandez Stokes Outrage but Fits a Predictable Mold