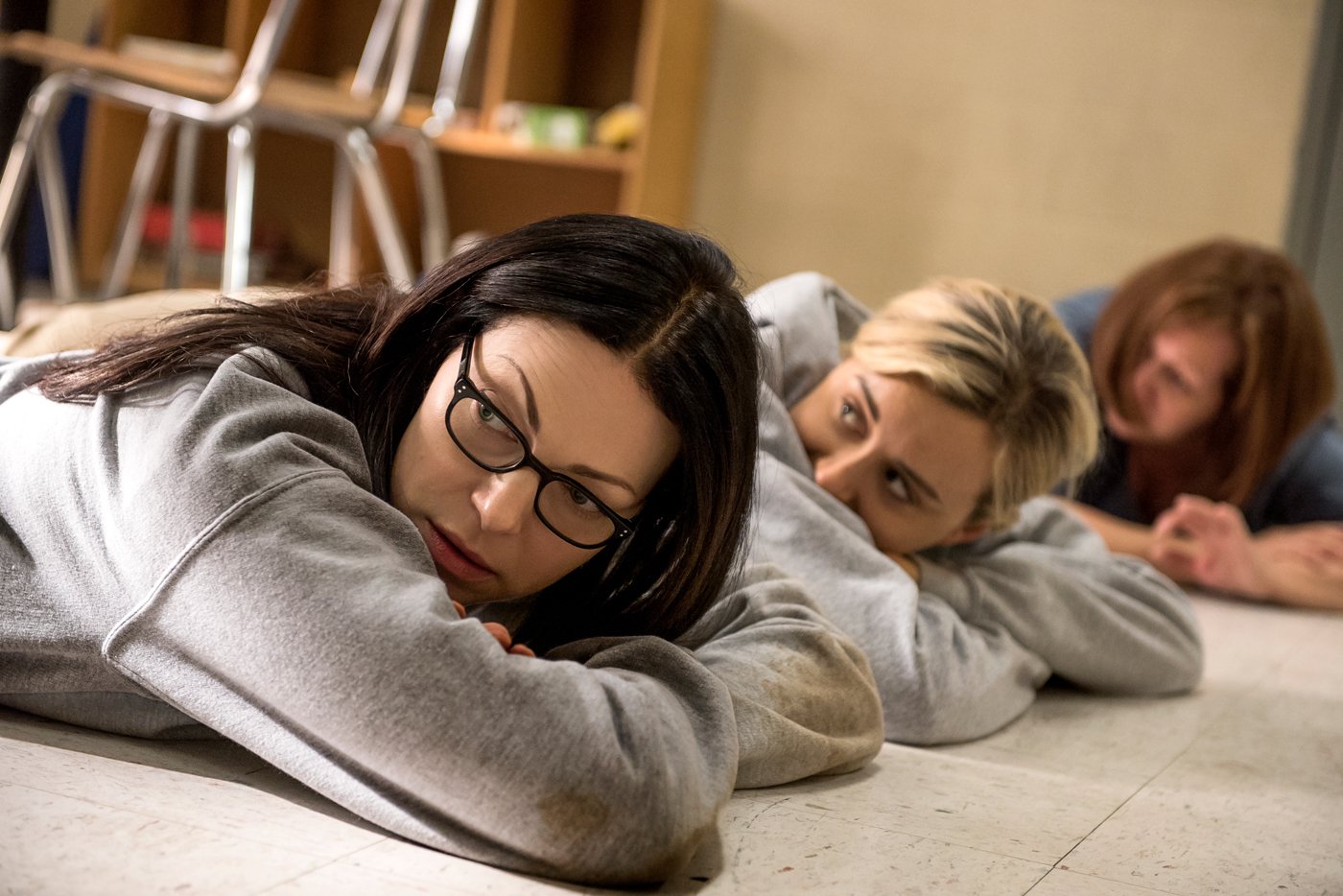 A “bottle episode” is, by design, an effort to preserve a TV show’s budget, usually by confining cast members to a specific set. It’s also a way of putting characters in a pressure-cooker situation and ramping up the tension until it fizzles out or, more often, boils over. The result is sometimes one of the more memorable episodes of “peak television,” such as Breaking Bad’s “The Fly” and The Sopranos’s “Pine Barrens.” For its fifth season, Orange Is the New Black applies this logic to all 13 episodes, resulting in a “bottle season” of sorts. Where previous seasons of the Netflix series took place over a few weeks, season five compresses its storytelling into a three-day period.

The prison dramedy’s new season begins where the last one left off: Following the accidental killing of Samira Wiley’s Poussey at the hands of a corrections officer, Baxter Bayley (Alan Aisenberg), Litchfield Penitentiary becomes embroiled in chaos, with the inmates heading full tilt toward an uprising. Amid the maelstrom, Daya (Dascha Polanco) ends up with a guard’s gun in her hands and the series spends the next three days exploring what happens to the prison and its inhabitants in the throes of a riot.

At first, a riot seems like excellent fodder for Orange Is the New Black to reveal new layers of its characters’ lives. Such character excavation is the strong suit of a series that juggles dozens of storylines, each with thoroughness and tenderness, while crafting new ones out of thin air from seemingly nonessential characters. But while the new structure is ambitious, it quickly becomes apparent that the “bottle season” format is antithetical to the show’s unique investment in such an overwhelming number of characters.

In the past, all of the show’s episodes would home in on a specific character—usually an inmate but sometimes a guard or administrator—and contextualize his or her plotline through a series of flashbacks. Season five largely shuns such specificity, choosing instead to pan out and keep us constantly updated on the entire cast. Though the compressed timeline may have seemed like a way to narrow the show’s focus, it ironically causes plotlines to feel more vague and messy. The result is a season that, remarkably, sees the series biting off more than it can chew for the first time in its run.

Because Orange Is the New Black insists on keeping us up to date with each character, clique, and conflict in real time, this new season is more tonally abrupt than past ones. The series has always been successful at toeing the line between humor and seriousness, but the shifts in season five from light to dark are unusually jarring. In one moment, Taystee (Danielle Brooks) and Soso (Kimiko Glenn) are on the verge of tears mourning the death of their friend; in the next, a food fight breaks out in the prison cafeteria. While comic relief may have been a welcomed guest in previous seasons, here the dark subject matter makes the show’s usual silliness feel out of place. When Litchfield’s resident meth-heads decide to put on a mock American Idol, one can’t ignore how horrifying it is that the contestants are hostages.

Which isn’t to say that the season’s experimental format is entirely irredeemable. Orange Is the New Black has always been invested in the dual concepts of freedom and power. Can one exist without the other? How can we retain a sense of power when it has been stripped from us? By introducing a riot at Litchfield (not to mention a gun that passes between many people), the series forces us to examine what happens when freedom and power collide in ways we haven’t yet seen. For the first time at Litchfield, the inmates have a modicum of autonomy, holding guards hostage and creating their own rules of governance. Some inmates use this fraught situation as an opportunity to seek justice, to negotiate the release of the guards in exchange for improved prison conditions. Others, though, seek revenge, while still others seek only to avoid the drama, hiding in the prison’s secret corners and hoping that their lack of involvement will keep additional time off of their sentences.

This scenario also raises another question: Does a riot foster unity or does it expose people’s own self-interests? Amid an otherwise hazy web of plotlines, two characters—Taystee and Gloria (Selenis Levya)—stand out in their representation of each possible answer. In the process, the two inmates inject this season with a dose of pathos that feels especially necessary after Poussey’s death. Still grieving her friend, an impassioned Taystee partly frames her negotiation of the terms of the hostages’ release on behalf of honoring Poussey’s memory. Gloria, meanwhile, is distraught over a family crisis and is torn over the selfishness required to be granted furlough. Perhaps more than any other characters this season, Taystee and Gloria embody what Orange Is the New Black has always excelled at: deftly combining character study, dark humor, and heart-wrenching poignancy.